The Nirav Modi scam has silenced the central leadership

NEW DELHI: The Bharatiya Janata Party finds itself in the dock on the issue of corruption on the eve of the Karnataka elections. The Nirav Modi scam has given the Congress a cutting edge with party President Rahul Gandhi exploiting it to the hilt with an aggressive campaign on the social media along with almost daily briefings on the issue by senior leaders.

Rahul Gandhi through his Twitter handle has been leading the campaign, hitting the Prime Minister Narendra Modi directly using and popularising the #ModiRobsIndia hashtag.

In all the state elections from 2014 till date the BJP had taken up the corruption issue, using it to target the Congress party. This will be the first state election where the BJP could lose the moral high ground to the Congress party that been working overtime to dig out facts and linkages on the Nirav Modi bank fraud, and releasing these to the media on a regular basis. However, it is Rahul Gandhi’s tweets that are creating a storm on the social media and setting a trend against the BJP on the issue. 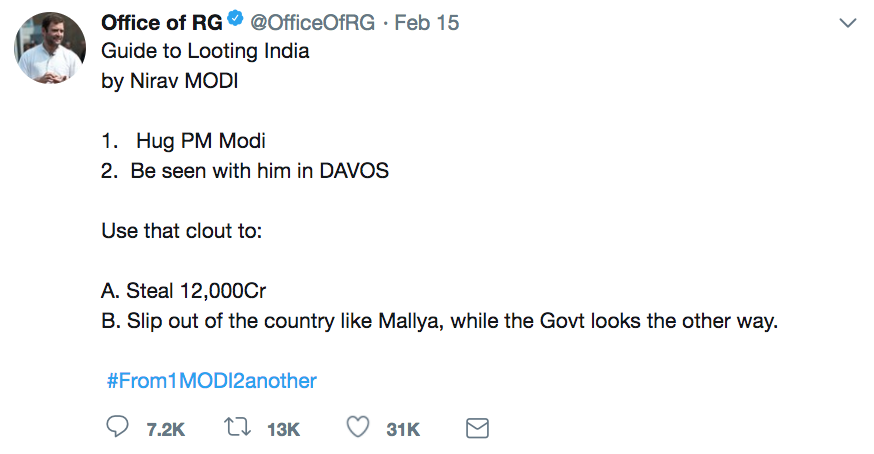 PM Modi in Mysuru, Karnataka just yesterday had hit out at Chief Minister Siddaramaiah saying, "I received many calls from people after I said at a rally in Bengaluru recently (4 February) that a 10 percent commission government was ruling the state. They said the commission was more than (10 percent). You decide if you want a commission or a mission government.”

However, in no time this was punctured by the Chief Minister with a tweet, “"You made common people stand in queues to deposit their money in the banks (referring to the note ban in 2016) and then let Nirav Modi (billionaire jeweller accused in Punjab National Bank's fraud case) run away with Rs 12,000 crore of people's money,"

The BJP is also becoming defensive about the choice of its Chief Minister candidate B.S.Yeddyruppa for Karnataka who is perceived to be involved in a land scam and does not have a clean reputation on the ground. Siddaramaiah has been raising this issue on a daily basis as well, in an attempt to neutralise the BJPs charges against him on corruption but more on lack of development. Local BJP leaders are also opposed to Yeddyruppa’s candidature, maintaining to the media that his reputation makes him a “weak” candidate.

The Nirav Modi scam has silenced the central leadership, but also its allies in government except for the Shiv Sena that has launched a frontal attack on the BJP. The Rs 11,400 crores fraud through the Punjab National Bank by the PM’s namesake from Gujarat has the Shiv Sena saying that “talks of a corruption free India and transparent government have been laid bare in just three years. Farmers are committing suicide as they cannot repay their debt of Rs 100 and Rs 500 but here people have absconded (after swindling lakhs of crores).”

Shiv Sena’s mouthpiece Saamna stated in an editorial, “PM Narendra Modi’s election slogan na khaoonga, na khane doonga, proved ineffective in this case. An FIR had been lodged against Nirav earlier. How did he manage to go to Davos and meet PM Modi along with other industrialists.”

The Akali Dal and the Telugu Desam have not said a word on the issue, clearly sending out a message that this was for the BJP to battle out on its own.