Does New Delhi Even Know That “Ittehaad” Is “Ittefaq” In The Singapore INA Marker ?

Singapore's famous Espalanade Park is also known for holding the INA marker. Indian dignitaries visit the site regularly. Built in 1995, at the spot of the original INA War memorial, the marker documents an important chapter of India's Freedom movement.

Yet, it bears a fatal flaw.

Formed in 1942, after the abject abandonment of Indian troops by British officers (following Japanese invasion of the island), the INA achieved International recognition when Netaji Subhash Chandra Bose took over its leadership in 1943.

Functioning as the military wing of the Ārzī Hukūmat-e-Āzād Hind (Provisional Government Of Free India), headed by Bose, the INA scored some spectacular feats in Burma. Combining traditional battle tactics with guerrilla operations, INA was able to hold its own and advance till Imphal and Kohima. 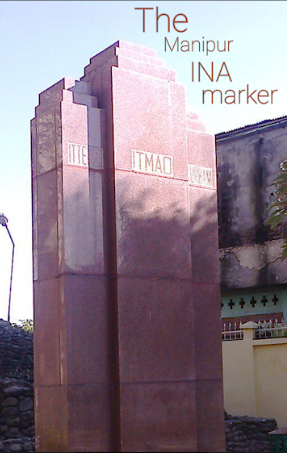 With the battle still raging, Netaji came back to Singapore. On July 8, 1945, he laid the foundation stone of the INA war memorial. Inscribed on the stone were three mottos of the INA: ITTEHAAD (UNITY), ETMAD (TRUST), KURBAANI (SACRIFICE).

Japan surrendered in August, 1945. Deprived of logistical support, the INA too wilted; after the British returned to Singapore, 'Lord' Mountbatten had the INA memorial demolished.

The British wanted to erase all memories of the INA and the audacious hope--of India gaining Independence through the action of a national army of its own--it represented for the Indian people. INA officers were put on public trial at the Red Fort. As the exact location of 1857, India's first war of Independence, and the trial of Bahadur Shah Zafar, Red Fort carried a huge symbolic significance.

However, the first three INA officers--Sehgal, Dhillon and Shahnawaz--to be tried--became overnight heroes. From NWFP and Punjab to Chennai and Nagaland to Maharashtra, Indian public opinion was inflamed.

Despite the raging political/communal conflict over Pakistan, demonstrations all over the country merged Congress and Muslim League flags. A people's upsurge, which included tremors in the 'loyal' British Indian army, shook the empire.

INA trials, and the outrage they inspired across communities, showed that even in 1945-46, another India, free from communalism and partition, was possible.

After charging and convicting three INA officers for treason, torture, murder, abetment to murder, and 'waging war against the Crown and Empire', the British had to release all three on 3rd January 1946. British officials warned both of a civil uprising and a military 'mutiny' of the 1857 type.

In its defeat, the INA defeated the British.

Singapore gained Independence in 1965. India was the second country to recognise the new nation-state.

In 1995, a Singapore heritage foundation built a marker on the site of the INA memorial demolished by the British.

Subhash Chandra Bose represented 1857 nationalism. He was a great follower of Urdu and Ganga-Jamuni Tehzeeb. INA regiments were named after Bahadur Shah Zafar, Tantya Tope--even Rani Lakshmi Bai! There were 'Nehru' and 'Gandhi' Brigades too...

ITTEFAQ means coincidence or at most 'agreement'...Main Aapki Rai Se Ittefaq Rakhta Hoon (I agree with your opinion)...

Also, ETMAD means trust, not faith. In a country riven with British sponsored communal conflicts, Bose' emphasis on trust as a motto carried a political motive.

The semantic blunder in the new INA marker is not a small 'faux paus'; it connotes the larger problem of Indian nationalism--the point at which its roots departed from Urdu. How else do we analyse the spectacle of the distortion of the mottos of a revered entity--the INA? And the convoluted representation of something put in place by Subhash Chandra Bose, lionised even by the current, Hindu nationalists!

The 'best' part is that a INA memorial built in Manipur in 2005 carries the correct motto ITTEHAD, ETMAD and KURBAANI in full measure!

In 2015, Prime Minister Modi visited Singapore. He even went to the marker. But the entire battery of IFS officers that must have been present, failed in pointing out the glaring lacunae.

Conscentious intelligentsia of India needs to raise this issue---such a big anamoly can not be allowed to persist. The nationalist claims of BJP and RSS stand exposed--what is the point of making a hue and cry about Bose, enquiry into his end, pitting him against Nehru etc, when you hate Urdu, the language of Bose' nationalism, and cannot lift a finger to correct a blatant mis-representation of his motto?