Lenin, Periyar and Now Azad: A Message in the BJP Attack on Specific Statues

KOLKATA/NEW DELHI: Taking a leaf out of the US Soldiers trajectory in Iraq where their first act was to bring down a statue of then ruler Saddam Hussein, the BJP continues its attack on statues of iconic leaders across the country. BJP cadres pulled down the bust of freedom fighter Maulana Abdul Kalam Azad in Kakinara, West Bengal in the wake of the Ram Navami violence.

Violence continues in the state, spiking currently in Asansol’s Raniganj area. At least three person have died and morer than 50 injured as armed mobs brandishing swords and firearms ‘celebrated’ the festival.


This is the third statue to be pulled down, with the BJP following a clear cut agenda. The first were two statues of Lenin, that were brought down by the BJP workers as soon as the Left Front lost the recent elections in Tripura. The act was condemned but did not seem to faze the party that is in government at the centre, that went on to vandalise a statue of anti-untouchability activist E.V,Ramasamy, popularly known as Periyar in Tamil Nadu. 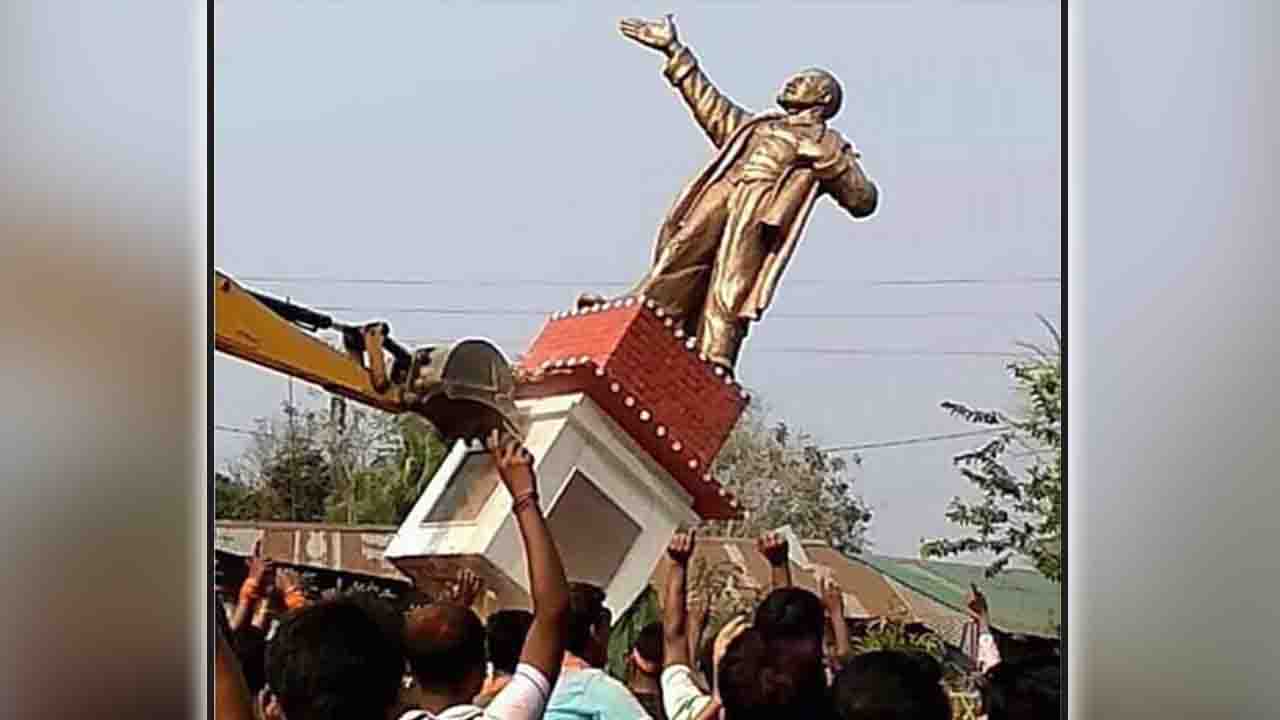 If there was any room for doubt the BJP national general secretary H Raja justified and predicted this in a post on his Facebook page,“Who is Lenin? What is the relevance he holds in India? What is the link between communism and India? Lenin’s statues were destroyed in Tripura, tomorrow, in Tamil Nadu, casteist Periyar’s statues will be destroyed.”

He removed it after a storm of protest.But others in the party repeated the same sentiments in different words, making it clear that the Dalit icon was a target. 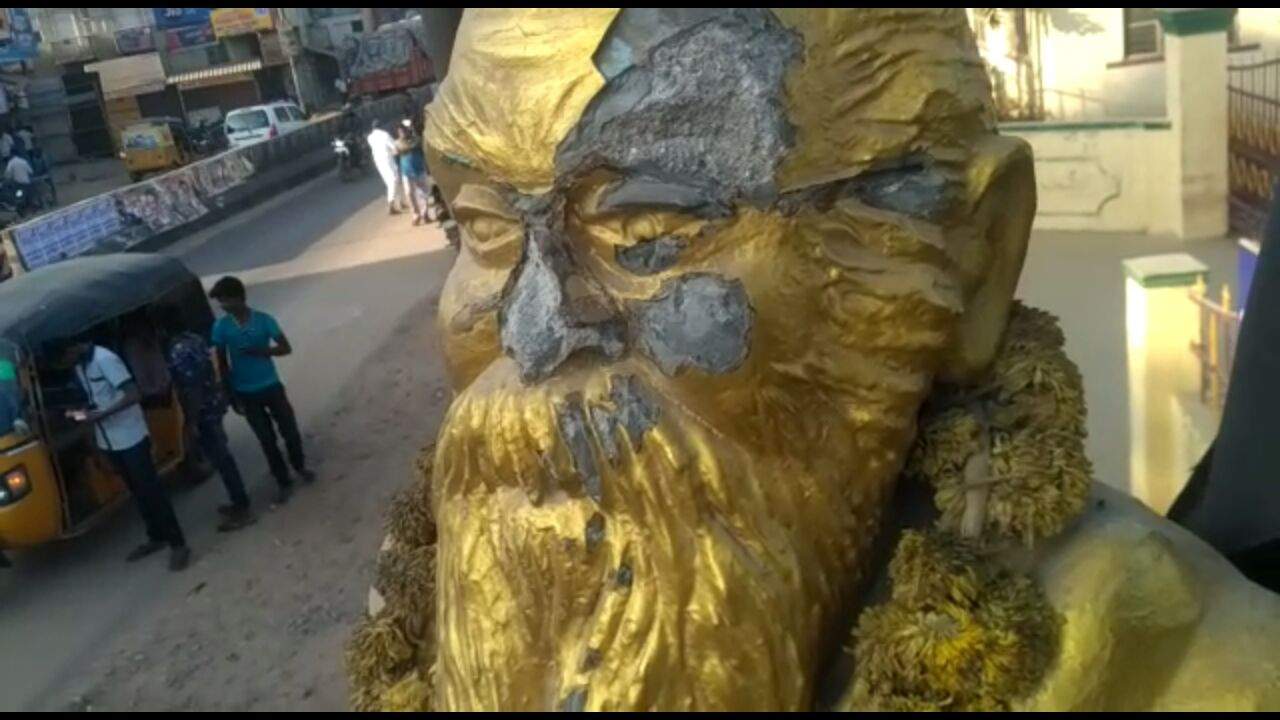 The attack on the bust of Maulana Azad actually completes the message that is inherent in the fact that statues of leaders seen by the Hindu nationalist forces as representing Communists, Dalits, and Muslims have been specifically targeted, one after another. This is certainly not innocent or coincidental.

The best rejoinder to the Hindutva brigade perhaps comes from Maulana Azad himself, speaking at the Jama Masjid to fellow Muslims at New Delhi, October 23, 1947 shortly after India attained independence. 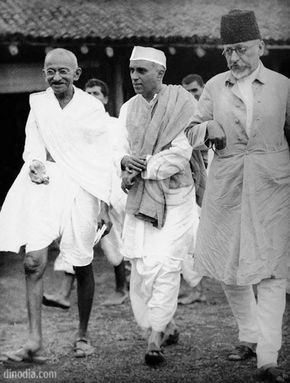 You know what has brought me here today. This congregation at Shahjahan’s historic mosque is not an unfamiliar sight for me. Here, I have addressed you on several previous occasions. Since then we have seen many ups and downs. At that time, instead of weariness, your faces reflected serenity, and your hearts, instead of misgivings, exuded confidence. The uneasiness on your faces and the desolation in your hearts that I see today, reminds me of the events of the past few years.

Do you remember? I hailed you, you cut off my tongue; I picked my pen, you severed my hand; I wanted to move forward, you broke off my legs; I tried to run, and you injured my back. When the bitter political games of the last seven years were at their peak, I tried to wake you up at every danger signal. You not only ignored my call but revived all the past traditions of neglect and denial. As a result the same perils surround you today, whose onset had previously diverted you from the righteous path.

Today, mine is no more than an inert existence or a forlorn cry; I am an orphan in my own motherland. This does not mean that I feel trapped in the original choice that had made for myself, nor do I feel that there is no room left for my ashiana (nest). What it means is that my cloak is weary of your impudent grabbing hands. My sensitivities are injured, my heart is heavy. Think for one moment. What course did you adopt? Where have you reached, and where do you stand now? Haven’t your senses become torpid? Aren’t you living in a constant state of fear? This fear is your own creation, a fruit of your own deeds.

It was not long ago when I warned you that the two-nation theory was death-knell to a meaningful, dignified life; forsake it. I told you that the pillars upon which you were leaning would inevitably crumble. To all this you turned a deaf ear. You did not realize that, my brothers! I have always attempted to keep politics apart from personalities, thus avoiding those thorny valleys. That is why some of my messages are often couched in allusions. The Partition of India was a fundamental mistake. The manner in which religious differences were incited, inevitably, led to the devastation that we have seen with our own eyes. Unfortunately, we are still seeing it at some places.

There is no use recounting the events of the past seven years, nor will it serve any good. Yet, it must be state that the debacle of Indian Muslims is the result of the colossal blunders committed by the Muslim League’s misguided leadership. These consequences however, were no surprise to me; I had anticipated them from the very start.

Now that Indian politics has taken a new direction, there is no place in it for the Muslim League. Now the question is whether or not we are capable of constructive thinking. For this, I have invited the Muslim leaders of India to Delhi, during the second week of November.

The gloom cast upon your lives is momentary; I assure you we can be beaten by none save our own selves! I have always said, and I repeat it again today; eschew your indecisiveness, your mistrust, and stop your misdeeds. This unique triple-edged weapon is more lethal than the two-edged iron sword which inflicts fatal wounds, which I have heard of.

Just think about the life of escapism that you have opted for, in the sacred name of Hejrat. Get into the habit of exercising your own brains, and strengthening your own hearts. If you do so, only then will you realize how immature your decisions were.

Where are you going and why? Raise your eyes. The minarets of Jama Masjid want to ask you a question. Where have you lost the glorious pages from your chronicles? Was it only yesterday that on the banks of the Jamuna, your caravans performed wazu? Today, you are afraid of living here. Remember, Delhi has been nurtured with your blood. Brothers, create a basic change in yourselves. Today, your fear is misplaced as your jubilation was yesterday.

The words coward and frenzy cannot be spoken in the same breath as the word Muslim. A true Muslim can be swayed neither by avarice nor apprehension. Don’t get scared because a few faces have disappeared. The only reason they had herded you in a single fold was to facilitate their own flight. Today, if they have jerked their hand free from yours, what does it matter? Make sure that they have not run away with your hearts. If your hearts are still in the right place, make them the abode of God. Some thirteen hundred years ago, through an Arab ummi, God proclaimed, “Those who place their faith in God and are firm in their belief, no fear for them nor any sorrow.” Winds blow in and blow out: tempests may gather but all this is short-lived. The period of trial is about to end. Change yourselves as if you had never been in such an abject condition.

I am not used to altercation. Faced with your general indifference, however, I will repeat that the third force has departed, and along with it, its trappings of vanity. Whatever had to happen has happened. If your hearts have still not changed and your minds still have reservations, it is a different matter. But, if you want a change, then take your cue from history, and cast yourself in the new mould. Having completed a revolutionary phase, there still remains a few blank pages in the history of India. You can make ourselves worthy of filling those pages, provided you are willing.

Brothers, keep up with the changes. Don’t say, “We are not ready for the change.” Get ready. Stars may have plummeted down but the sun is still shining. Borrow a few of its rays and sprinkle them in the dark caverns of your lives.

I do not ask you to seek certificates from the new echelons of power. I do not want you to lead a life of sycophancy as you did during the foreign rule. I want you to remind you that these bright etchings which you see all around you, are relics of processions of your forefathers. Do not forget them. Do not forsake them. Live like their worthy inheritors, and, rest assured, that if you do not wish to flee from this scene, nobody can make you flee. Come, today let us pledge that this country is ours, we belong to it and any fundamental decisions about its destiny will remain incomplete without our consent.

Today, you fear the earth’s tremors; once you were virtually the earthquake itself. Today, you fear the darkness; once your existence was the epicenter of radiance. Clouds have poured dirty waters and you have hitched up your trousers. Those were none but your forefathers who not only plunged headlong into the seas, but trampled the mountains, laughed at the bolts of lightening, turned away the tornadoes, challenged the tempests and made them alter their course. It is a sure sign of a dying faith that those who had once grabbed the collars of emperors, are today, clutching their own throats. They have become oblivious of the existence of God as if they had never believed in Him.

Brothers, I do not have a new prescription for you. I have the same old prescription that was revealed to the greatest benefactor of mankind, the prescription of the Holy Quran: “Do not fear and do not grieve. If you possess true faith, you will gain the upper hand.”

The congregation is now at an end. What I had to say, I have said, briefly. Let me say once again, keep a grip on your senses. Learn to create your own surroundings, your own world. This is not a commodity that I can buy for you from the market-place. This can be bought only from the market-place of the heart, provided you can pay for it with the currency of good deeds.

May God’s grace be on you!