Interactive Map Illustrates The Denial Of Welfare For Those Without Aadhaar

The map illustrates all publicly reported cases of denial of welfare due to Aadhaar.

NEW DELHI: The government of India’s push to make Aadhaar mandatory across a range of welfare schemes has been met with criticism, with the Supreme Court finally stepping in. The court said that Aadhaar, while allowed to be used for certain welfare schemes, cannot be a mandatory requirement, but that hasn’t stopped the government of India from pushing the 12 digit ID card.

Over several months, reports have emerged of Aadhaar-card related welfare scheme failures, where individuals have been denied access to welfare due to the lack of an Aadhaar card, adequate linking of the card number, and even biometric failures. One such tragic incident was an 11 year old girl’s death in Jharkhand in September last year. Right To Food campaigners said the girl died of starvation after her family’s ration card was cancelled because it was not linked to their Aadhaar number. In January this year, another woman, this time a 67 year old widow, died in Jharkhand’s Garhwa district reportedly because the family were unable to procure food after the Aadhaar-enabled point of sales (PoS) machine couldn’t authenticate their biometrics. At the time of writing, the Supreme Court has agreed to hear a petition highlighting starvation deaths in Jharkhand, with activists saying that the deaths have occurred because of the cancellation of ration cards that were not linked to Aadhaar.

Some of the cases illustrated by the map are as follows: 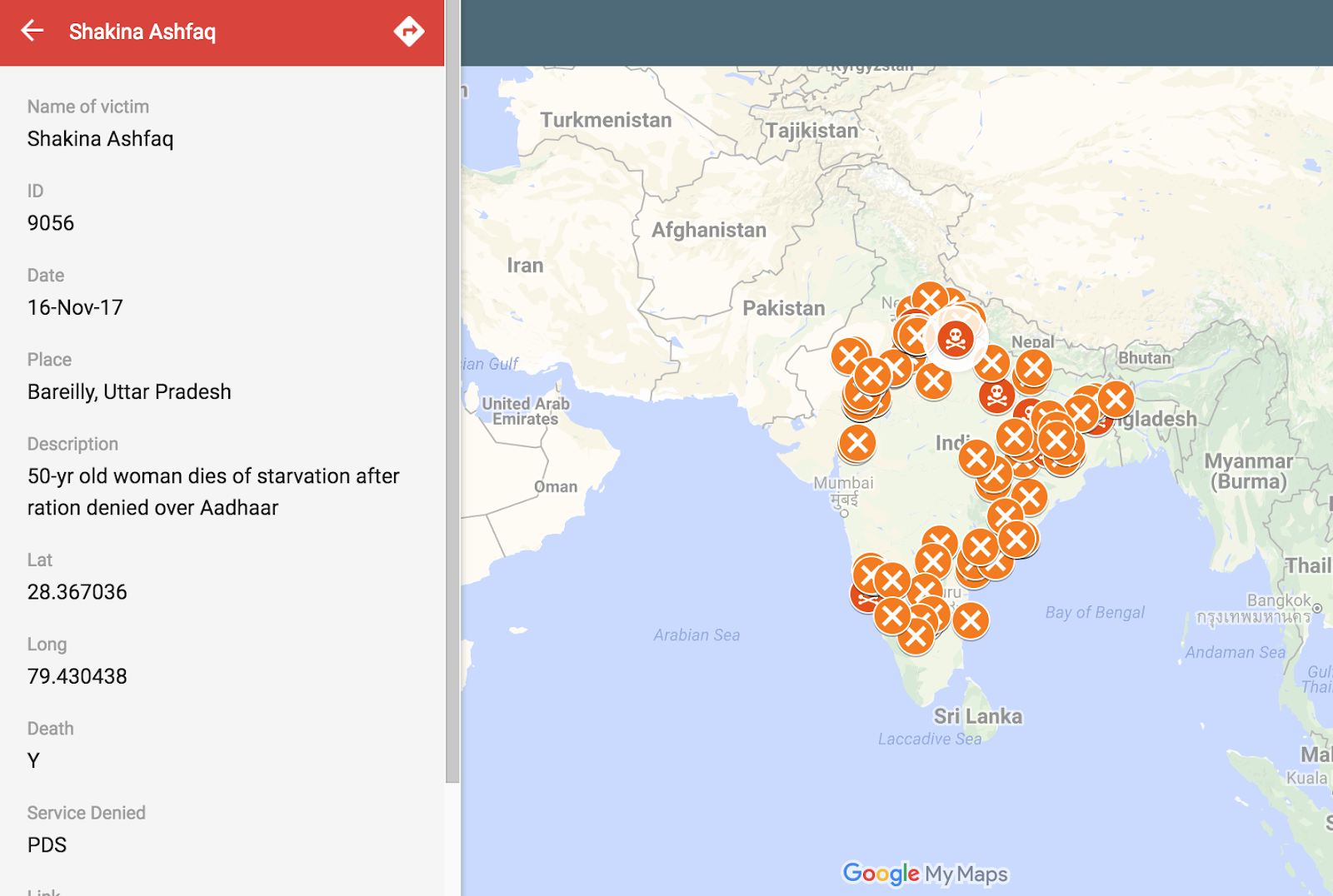 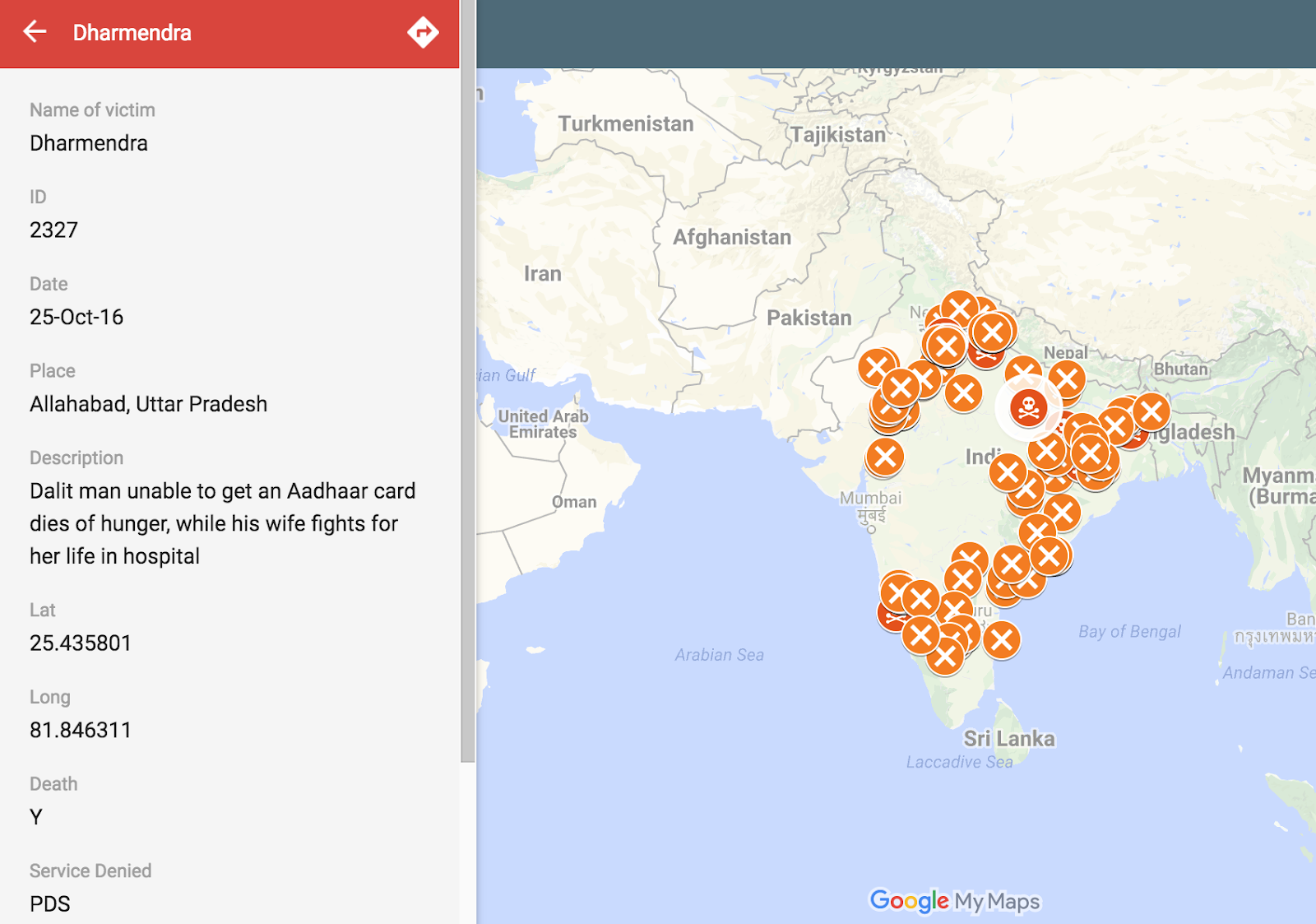 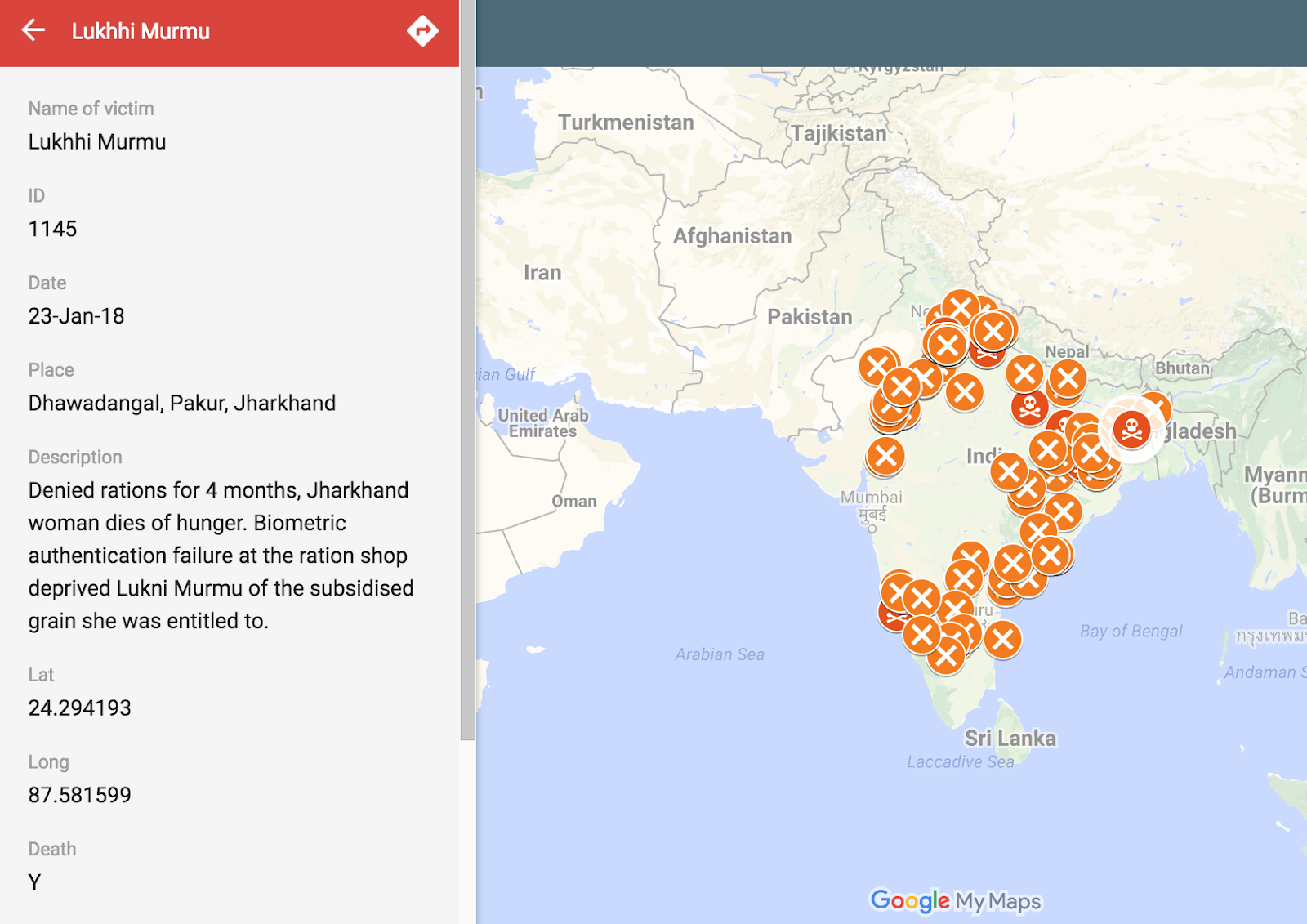 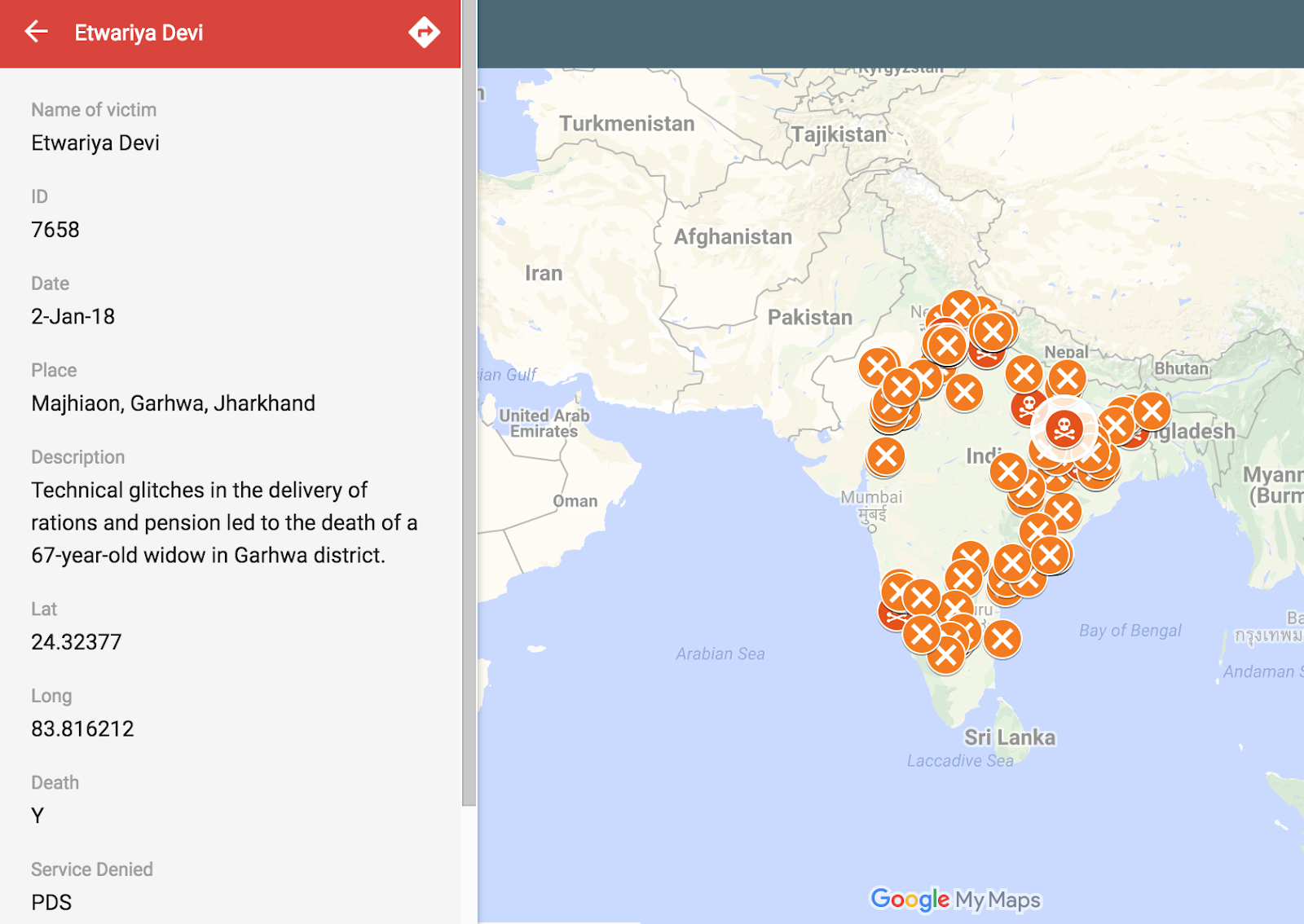 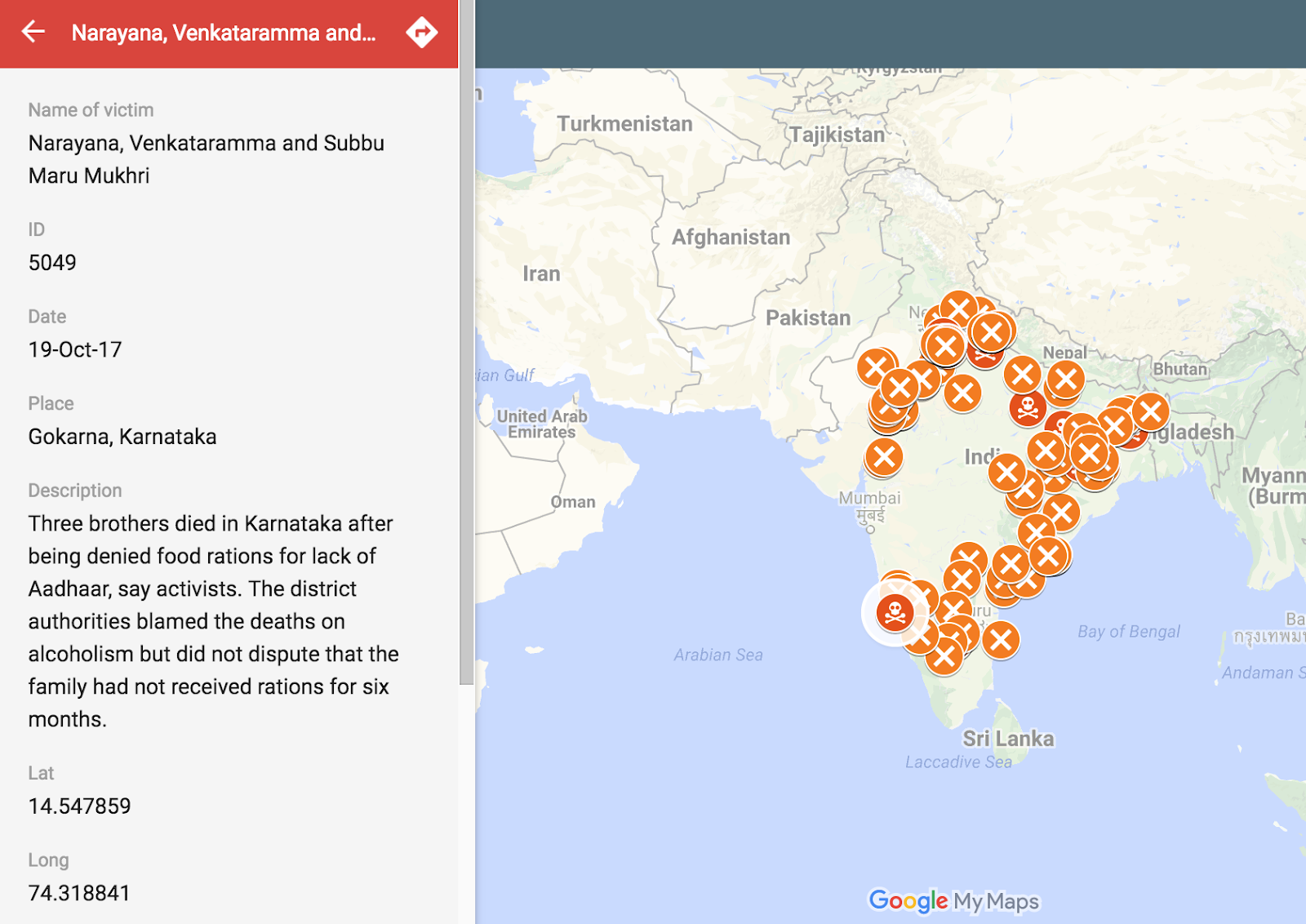 (Cover Photo: Santoshi Kumari died on September 28 after starving for four days in Jharkhand’s Simdega district. Activists say she died of starvation after her family was struck off the government welfare rolls for failing to link their ration card with Aadhaar)