'CJI at helm of affairs in Supreme Court'

Reaffirming the superiority of the Chief Justice, the Supreme Court today dismissed a petition which questioned the unilateral power of the CJI to constitute benches “arbitrarily” and allocate work to different benches and which sought framing of proper rules for it.

Rejecting all allegations of “arbitrary allocation of work” and stressing that CJI was the highest constitutional authority, the judgment said CJI had been entrusted the power to constitute benches and allocate work to different benches as he has been trusted by the constitution to be at the helm of affairs of the Supreme Court. 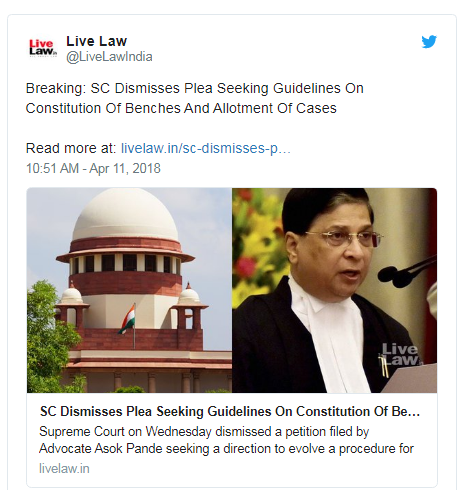 The judgment was written by Justice D Y Chandrachud who was part of the bench along with Chief Justice Dipak Misra and Justice A M Khanwilkar. Reading out the operative portion, Justice Chandrachud termed the petition filed by a Lucknow-based lawyer Ashok Pande as “scandalous”.

“From the institutional perspective, Chief Justice is at the helm of affairs of the Supreme Court.

“The responsibility thrust on the Chief Justice is for the safeguard of the independence of the judiciary”, it said.

The order comes at a time when the row over the assignment of cases in the apex court and role of Chief Justice Dipak Misra rages following the press conference by four senior-most SC judges. 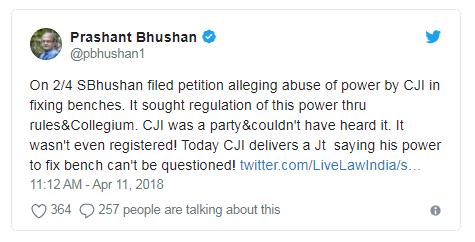 He also sought a writ of mandamus to the High Courts to evolve the set of rules on the pattern of rules so framed by the Supreme Court. ...

“With the press conference of the four senior-most judges of the supreme court the matter of preparation of the set rules governing the powers of the chief justice with respect to the formation of benches and vesting of jurisdiction came in public public domain and hence this petition is in national/public interest”, it said.

-All the judgement and orders should be dictated in open court by all the three judges or both the judges of the bench alternatively.

The four senior-most judges Justices J Chelameswar, Ranjan Gogoi, Kurian Joseph and Madan B Lokur had in the historic press conference on January 12 this year questioned the manner in which CJI allocated cases “selectively” to “benches of his preferences.”

In a letter to the CJI divulged at the press meet, they also alleged: “cases having far-reaching consequences for the nation and institution had been assigned by CJI selectively to the benches of his preferences”.

They had contended “things are not in order” and “many undesirable things are happening”. They had said CJI, though a master of the roster (one who decides which bench will hear which case) was exercising the power arbitrarily.

Though Master of Roster, he is only ‘first among equals’ and not a superior authority. But he behaved like one, they alleged.

Members of any multi-membered judicial body including this court would not arrogate to themselves the authority to deal with and pronounce upon matters which ought to be heard by appropriate benches”, the judges had said.

“Any departures would not only lead to unpleasant and undesirable consequences of creating doubt in the body politic about the integrity of the institution”, they had said.

Last week Senior advocate and former Law Minister Shanti Bhushan filed a PIL in the Supreme Court seeking clarification on the administrative authority of the Chief Justice of India (CJI) as the master of the roster and for laying down the principles and procedure to be followed in preparing it for allocation of cases.