Protest requesting the Government to revisit the Judgement passed by Supreme Court on March 20.

NEW DELHI: On May 1, the National Coalition for Strengthening the Prevention of Atrocities (PoA) Act (NCSPA), formed by the National Campaign on Dalit Human Rights (NCDHR), held a protest requesting the Government of India to revisit the Judgement passed by the Supreme Court on March 20.

The protest included citizens, students and a number of leaders from various parties, the most notable being Brinda Karat, a member of the Communist Party of India (CPI). The protest came in light of the recent increase in the number of atrocities against the Dalit community, including various arrests of Dalit leaders and activists . It additionally served as a request to the Government of India to reconsider the recent verdict given by the Supreme Court which resulted in the dilution of the Prevention of Atrocities Act (PoA), 1989.

The verdict states that “an anticipatory bail should be granted to the person unless there is a case under the act. Also, keeping in view of acknowledged abuse of law of arrest in cases under the Atrocities Act, arrest of a public servant can only be after approval of the appointing authority and of a non public servant after approval by the Senior Superintendent of Police (SSP) which may be granted in appropriate cases if considered necessary for reasons recorded. Such reasons must be scrutinised by the Magistrate for permitting further detention. Also, to avoid false implication of an innocent, a preliminary inquiry maybe conducted by the Deputy Superintendent of Police (DSP) concerned to find out whether the allegations make out a case under the Atrocities Act and that the allegations are not frivolous or motivated.” 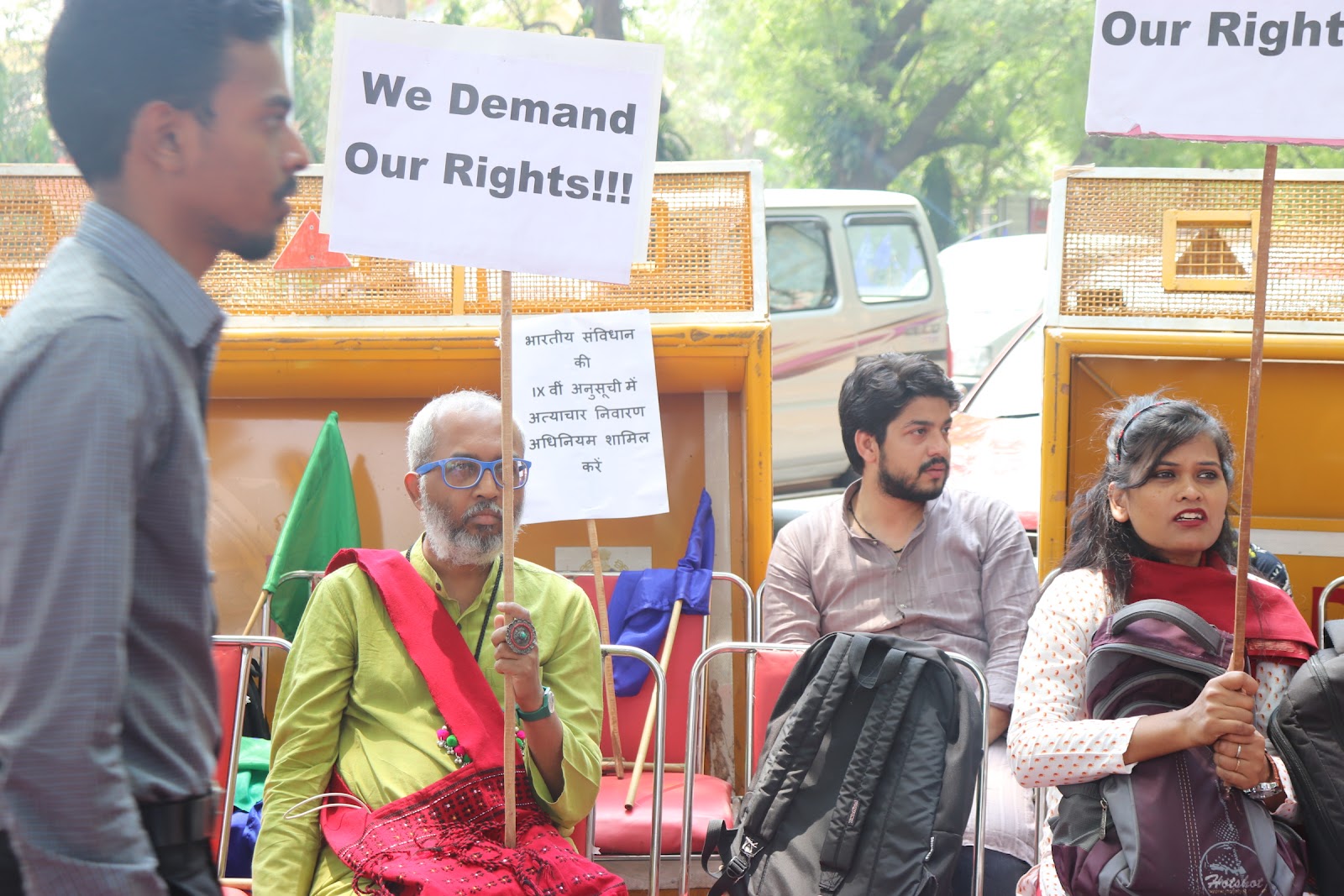 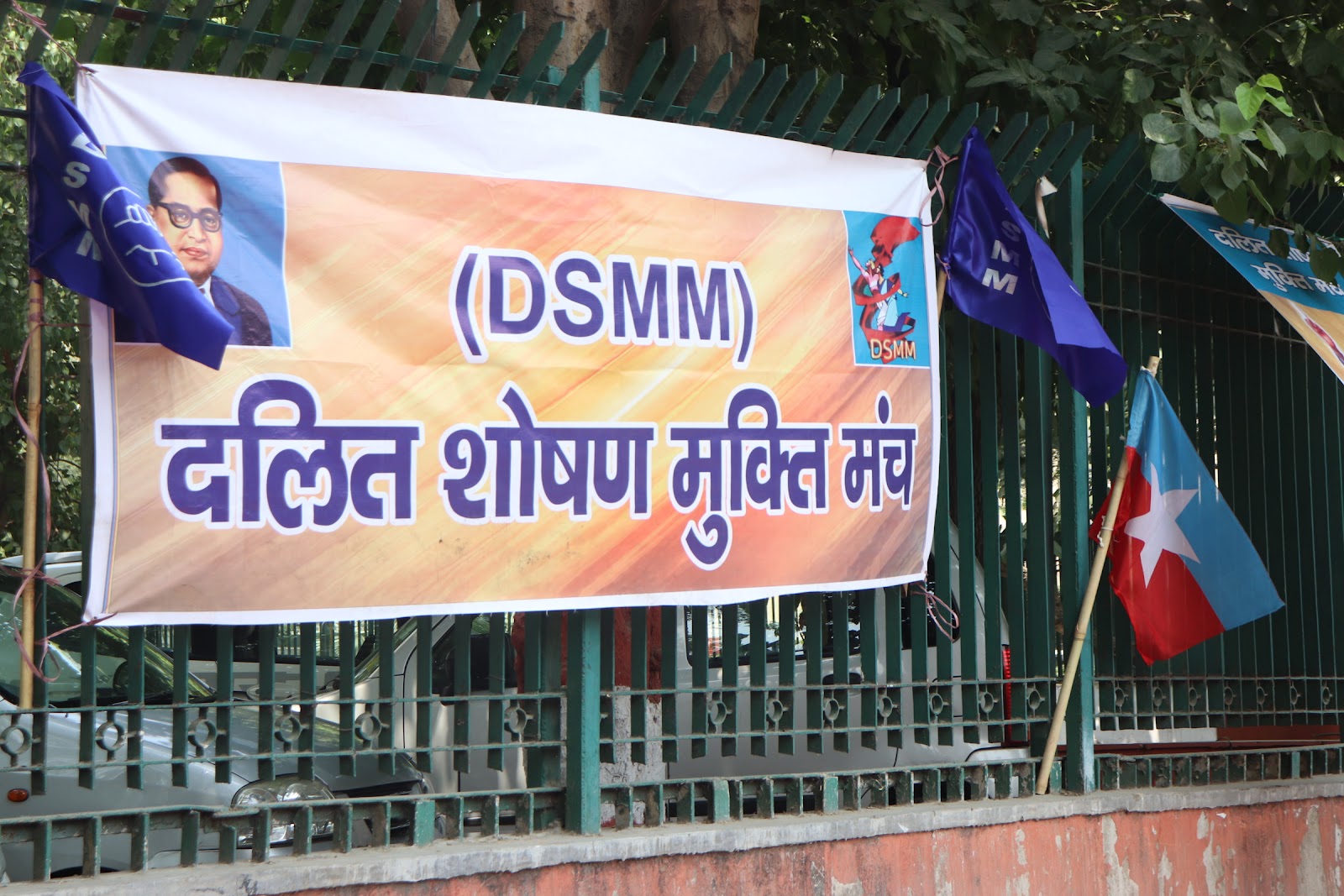 Speaking of the injustice meted out in passing this verdict, one of the members of the Core Committee of Dalit Shoshan Mukti Morcha (DSMM), Jaspal said that, “the verdict is a dilution of the Atrocities Act. Firstly, most of the cases go unreported, and the ones that do get reported are only reported after a lot of societal or political pressure to speak up. After the verdict, the arrest of the people responsible for these crimes will not be considered until it is confirmed by either the DSP or any high level police officer. We have gathered here today to protest this verdict which is unfair for the community affected.”

There were loud chants of “Jai Bheem” echoing throughout the protest and a fair number of women and student protesters had joined the protest. People from different states had joined in. One such protester was Sanjay, a man who had come from Bihar and had been a part of such protests in different parts of the country.

Talking about the reason for his participation, Sanjay said, “Humanity comes first for me. Even Ambedkarji believed in the same. The people who have gathered here today have the same philosophy. We need a stronger law but also what we need is a balance. If the law is right but the ones who implement them are not, then injustice is caused. That is the reason I’m here today. Because the government has done wrongs but it also has done right towards its citizens.” 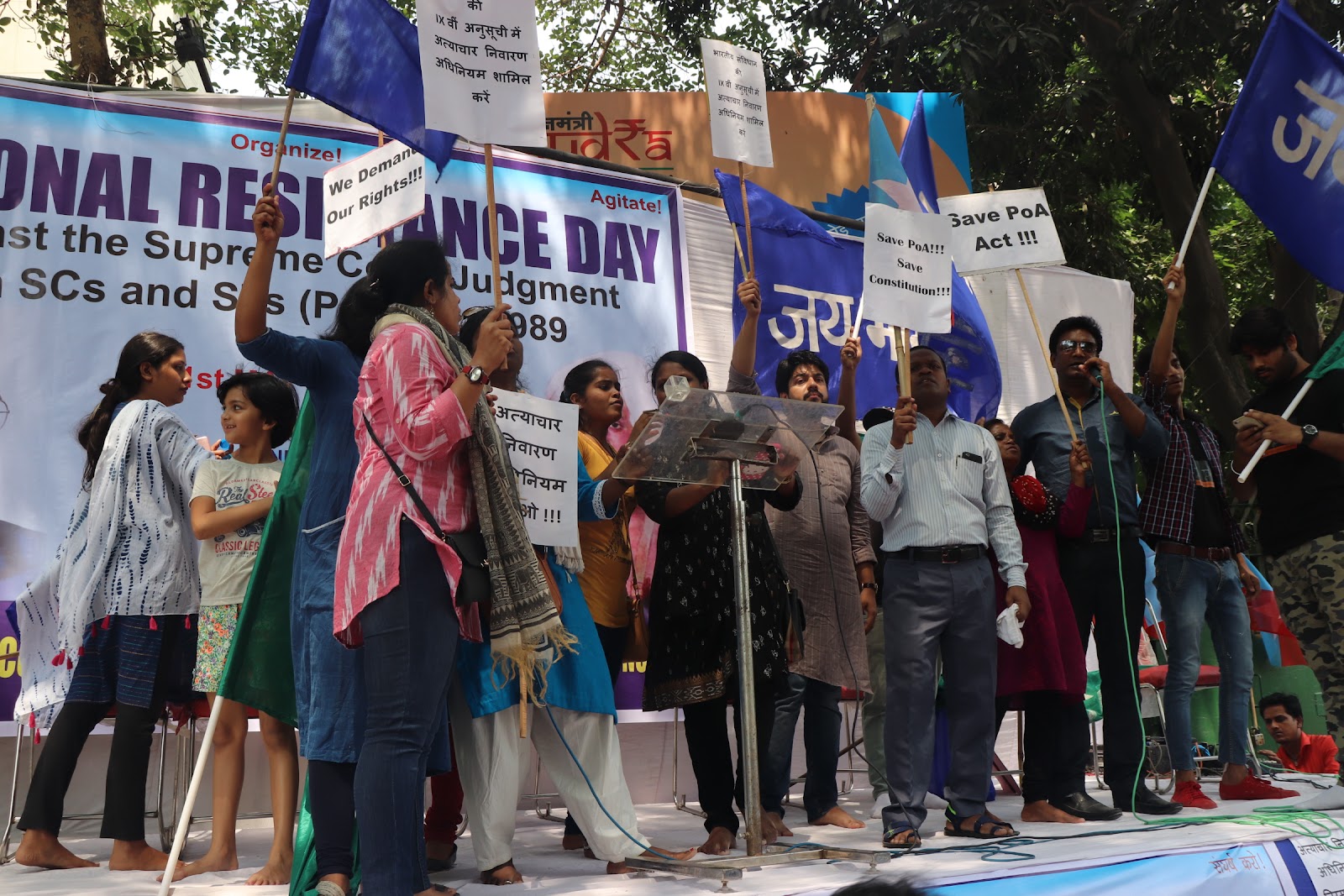 Another organization, the Ideal Dalith Employees Association (IDEA), led by their president, G. Rajasundar Babu, was also present. The organization is originally based in Guntur, Andhra Pradesh and had brought with them a list of demands they wanted the Government of India to fulfil. When asked about their demands and expectations from the protest, Babu said, “The Constitution has been in force since 1950. We, as a community, have been facing such atrocities since before we got Independence. It has been over 60-70 years now that such atrocities have been happening. And we have only seen a rise in such incidents. We want the Government to reconsider the verdict passed on March 20.”

In the list of demands, they requested the inclusion of the SC/ST Act in the ninth schedule of the Indian Constitution in order to protect the SC/ST communities. They also demanded creation of state level SC/ST commissions in all states of India with Judicial powers and former High Court judges as Chairmen.

The main aim of the protest, as echoed by everyone attending the protest was to move the Government of India to “urgently move references to the larger bench of the Supreme Court of India on the judgement passed under SCs and STs (PoA) Act, requesting to revisit the judgement, rescind the directions and expunge certain observations therein” and also to “urgently pass an Ordinance to reinstate the SC/ST (PoA) Act 1989 and the PoA Amendment Act 2015 in its originality.”

Talking to The Citizen, the National Convener of NCSPA, Dr. V. A. Ramesh Nathan. Nathan stated, “We have been doing instrumental work in bringing in the experiences of witnesses and victims and coming up with ways in which we propose amendments to strengthen the PoA Act. The Supreme Court brought three main guidelines which is diluting the spirit of the Act. The case between the two officials based on caste discrimination could have been dealt by the Supreme Court differently. They have not taken the ground reality and lay down the rules granting anticipatory bail and if a public servant has to be arrested, it has to be approved by higher authority and arrest of a non public servant needs to be approved by the Superintendent of Police. We demand the Central Government to include this Act in the ninth schedule of the Constitution so that the Judiciary does not interfere in the future and the Supreme Court to repeal this judgement.” 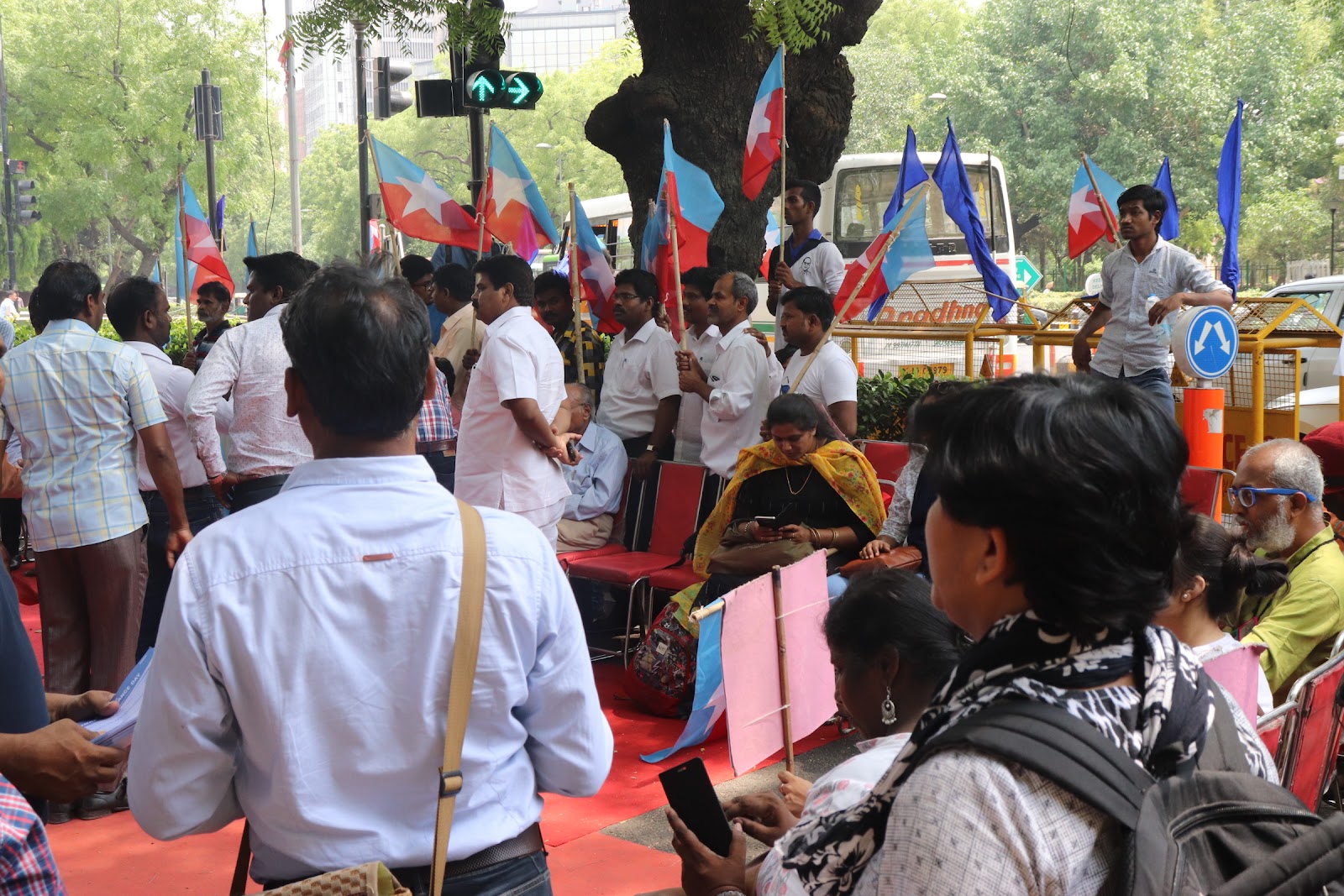 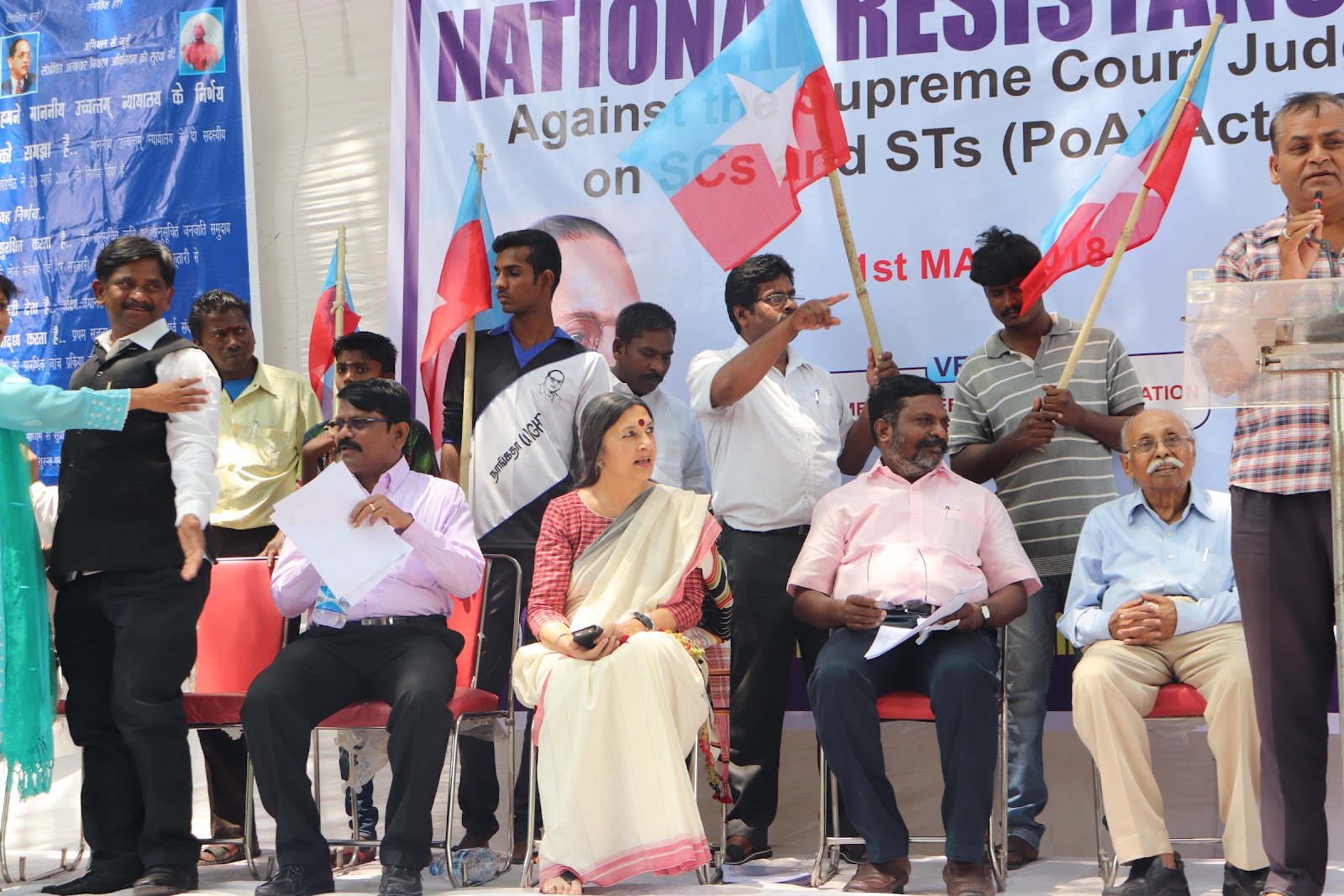 As the protest followed the recent Bhim Army protests across India, there is now increasing pressure on the Central Government as well as the Supreme Court to make significant changes in implementation of the PoA Act and protection of the scheduled castes and scheduled tribes.