Let me begin by offering my heart felt gratitude to the Aligarh BJP MP Satish Gautam to have brought up an issue of great importance to the national agenda. Thanks to his effort, the portrait of M.A. Jinnah which was doing such great harm to the nation ever since it was placed there in 1938 has finally been removed.

I shudder to imagine how many unpatriotic hearts in the Aligarh Muslim University (AMU) may have got inspired looking at the portrait of Jinnah sitting calmly along-with those of Gandhi, Ambedkar, Rajendra Prasad, K. M. Munshi, C.V. Raman, Jayaprakash Narain, Mother Teresa etc. on whom these people in AMU so cleverly conferred honorary life membership of AMUSU just to hide their Jehadi intentions.

Former Vice President Hamid Ansari was going to be the latest on whom honorary life membership was to be conferred. He too must have got a lesson in true nationalism.

I consider myself a mildly patriotic Indian. I must confess that I don’t get much time to show my patriotism in daily life. My job leaves me very little energy and time for more important things of life like national pride and patriotism. And, so I miss out on the fiery debate on some TV channels on various aspects of patriotism.

The debates are indeed enlightening, cover as they do history of up to 500 years or more like Tipu Sultan, Padmawati, reality of Taj Mahal and Lal Qila, Love Jihad, minority appeasement etc. Occasionally when I do watch these debates, my tired mind is unable to decipher what is being said. I used to lapse into depression thinking how such fantastic aspects of history had been hidden from me till a firebrand nationalist friend explained all about the conspiracy of these anti-national historians who hide the facts of faith!

However, this time it was different. It was both educative and emotional. I felt so deeply perturbed to hear of the damage this portrait of Jinnah has done to our country. I was reassured a bit to know that the portrait has been removed after the patriotic attack on AMU by some people belonging to Hindu Yuva Vahini- a group having the blessings of the Uttar Pradesh Chief Minister Yogi Adityanath.

In the process a little blood was spilled. A few nationalist abuses were hurled. Police swung into action with a lathi-charge on unpatriotic students of AMU. But it is a small price to pay for the removal of the Jinnah portrait. After all the Kairana parliamentary by-poll is going to take place. Karntaka electoral battle is at its height. 2019 is also not too far away.

My patriotism also got a solid boost. I now feel emboldened to demand more so that the patriotic fervour is carried to its logical conclusion. Here is a list of things which I fervently wish to be completed sooner rather than later-

. Historically the two nation theory was propounded and nurtured by leaders like V.D. Savarkar and others belonging to Hindu Mahasabha before Jinnah took it up for the establishment of a religion based country called Pakistan. In his presidential speech at the Calcutta session of the Hindu Mahasabha in December 1937, Savarkar declared that “We Hindus are a nation by ourselves”. Significantly, this was a few months before Jinnah and the Muslim League formally adopted the two-nation theory. Savarkar went on to say, “For the last 30 years we have been accustomed to the ideology of geographical unity of India and the Congress has been the strongest advocate of that unity but suddenly the Muslim minority, which has been asking one concession after another, has, after the Communal Award, come forward with the claim that it is a separate nation. I have no quarrel with Jinnah’s two nation theory. We Hindus are a nation by ourselves and it is a historical fact that Hindus and Muslims are two nations." In the light of such facts, I demand that if Jinnah is honoured anywhere, the honour must necessarily be given to Savarkar and such other persons who originally thought of this idea.

. There are historical documents, historians claim, pointing to the fact that Hindu Mahasabha and Muslim League had entered into an alliance in Bengal, Sindh and NWFP in the pre-independence days to form government. Shyama Prasad Mookerjee was part of the government in Bengal with Muslim League in 1941. The two parties together formed the government in Sindh in 1943 and NWFP in 1939. This makes me a little uncomfortable today as it somewhat disturbs the patriotic credentials of people like Shyama Prasad Mookerjee who supported partition of Bengal and Punjab on communal lines just as Jinnah did. This just can’t be true? This must be another conspiracy because such historical facts dilute the claim that Hindu Mahasabha-Jansangh-BJP-RSS continuum have always looked at Muslim League and Jinnah etc. as sworn enemies. Such references in history books should either be removed completely or modified suitably to retain the beautiful patriotic picture as is being done by activists of Hindu Yuva Vahini and BJP-RSS leaders in TV Studios, on the Facebook and Whatsapp forwards from their Social Media factories.

. Again, we are told by historians that till 1938 Jinnah was seen as an ambassador of Hindu Muslim Unity. Even Gopal Krishna Gokhale called him ‘the best ambassador of Hindu Muslim Unity’. Jinnah did not go to jail but he was deeply involved in the freedom movement against the British. He defended Bal Gangadhar Tilak in the sedition case. He is also said to have defended Sardar Patel and Bhagat Singh in the court against the British. Heretic! How could this be true? He was a ‘butcher’, ‘Hindu hater’, ‘killer who ordered murder of Hindus by giving a call of direct action in 1947? I know these are true because many of my friends sent it to me on Whatsapp and Facebook. How can one person be good and bad at two different times of his life? Here again suitable changes in history books is required immediately or else Hindu Yuva Vahini- Bajrang Dal- BJP-RSS brigade will be forced to initiate some action or the other for the sake of true patriotism. The government should also think of starting a criminal case against Gokhale for saying words of high praise for Jinnah. Maybe CBI can look into it.

. Another person who deserves to be treated like Jinnah is Allama Iqbal whose song ‘Sare Jahan Se Achchha Hindostan Hamara’ is still sung in India by school children and others. (candid confession- I too hum the song whenever I hear it being played). Allama Iqbal became the ideologue of Pakistan and composed another song ‘Sare Jahan Se Achchha Pakistan Hamara’ later in his life. The first song should be banned because he composed the second song too. (though my friend says, he has seen a proof on Whatsapp that ‘Sare Jahan Se Achchha Hindostan Hamara’ was actually written by Mama Kripal and he would file a case against Allama Iqbal for plagiarising the song later by replacing Hindostan with Pakistan) A search committee of eminent nationalist historians headed by the young and scholarly Chief Minister of Tripura Biplab Deb, having impeccable credentials as a historian who discovered internet in the Mahabharat age, should be constituted immediately. The committee will be entrusted to find out all the portraits, group photographs and other scurrilous and seditious material from books, libraries, institutions, films, documentaries in which people like Jinnah and Iqbal are found in any form- audio, visual, images or text. These should either be removed or photoshopped to include people like Savarkar and Shyama Prasad Mookerjee using the techniques mastered in ancient India. (This step would have already been taken by now but for the news that Dina Nath Batra, the original nationalist historian emeritus is said to have staked claim for chairmanship of the said committee. The young and emerging band of nationalist historians, however, feel that Mr Batra needs to be in the Margdarshak Mandal of Nationalist historians.)

. They quote Muhammad Ali Jinnah having said on August 11, 1947 ‘You are free; you are free to go to your temples. You are free to go to your mosques or to any other places of worship in this State of Pakistan. You may belong to any religion, caste or creed—that has nothing to do with the business of the state.’ Rubbish! How could he have said it? An evil is an evil, a Satan is a Satan and nothing else. Those who see the grey colour in the splendid black and white reality of good and bad are actually anti-nationals. A list of all such people who complicate a simple, convincing story of patriotism should be prepared. Such people pose great threat to the nation. Telling of complex stories that requires application of mind creates stress to the individual and thus are harmful to society. Therefore, such academics and intellectuals should be brought under sedition laws.

The AMU episode, in a nut shell, has charged me with patriotism. I am sure many more in the country would be feeling the same. After the removal of the portrait of Jinnah the sense of victory should not lull us into inaction. Let us find out something, somewhere to fight for patriotism for nothing is too small to parade ‘patriotic feelings’ and get a few votes on the side lines as a sweet by-product of it. Amen. 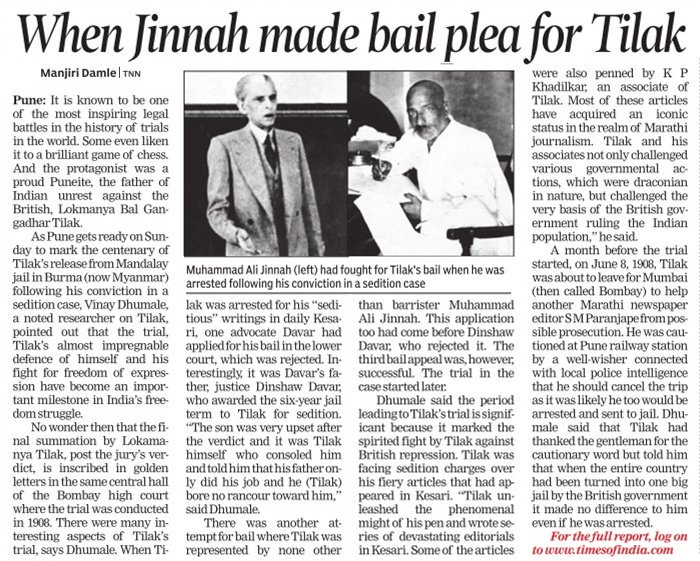