NEW DELHI: A protest march against the alleged “discrimination of the Hindu students” at Jamia Millia Islamia was organised a the Maulana Mohammed Ali Jauhar Marg outside JMI campus today.

The protest was led by Rahul Tiwari, a post graduate student at the university. The protesters tried to enter the premises of Jamia Millia Islamia and were stopped by the guards and the students of the university. 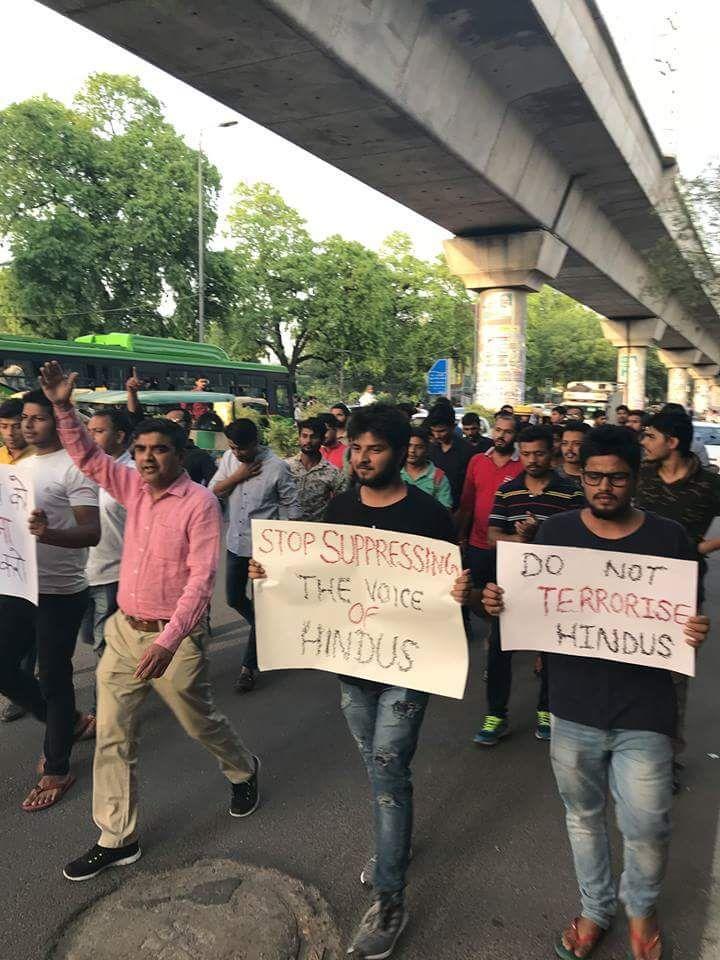 The call for protest was given by Rahul Tiwari in a Facebook post which read “jin bhi bandhuon ko Jinnah ka samarthan karnna hai ewam Jamia ke Hindu Vidyarthi ko dhamkana hai aj saye 6 baje jullena evergreen sweets aye, unki sutai ka poora bandobast rakh gya hai,” (People, who are supporting Jinnah and threatening Hindu students at the university are requested to come to Evergreen sweets in Jullena (near Jamia University) at 6 PM in the evening. We have made the preparations for their thrashing.)

The protest sparked controversy, as several students JMI said the rally should be condemned, especially in light of a similar attack held a week ago at the Aligarh Muslim University.

While the common students see the rally as having been organised by the right-wing students, ABVP, the student body of the Bhartiya Janta Party have issued a statement condemning the rally and making it clear that ABVP has no connection with the protest at the university today.

Asif Aftab, the secretary of the ABVP said, “we are unaware of such a rally being organised at the university and we condemn such an action. We are against any objectionable slogans which try to create a hostile situation at the university.”

Security has been beefed up at the university. The protest comes at a time when students are appearing for their end-semester examinations.

The placards in the hands of the protesters read, “Stop suppressing the voice of Hindus” and “Do not terrorise Hindus”.

Akhlaque Ahmed, an alumnus of Jamia Millia Islamia said that this protest is an attempt to disturb the peace in the campus and needs to be seen and condemned as that.

Meanwhile, some hundred students had gathered at Gate No 7 of the University following the event demanding an FIR against the protesters who aimed at spreading violence in the university.

Saima Saeed, the Media Coordinator, said that a sloganeering mob carried out the rally on the road outside the campus, which is a public road. “It wasn’t a rally and what happened is unfortunate,” she said She further added that, “this is a crucial time for the university as it is holding the exams and we do not want to be dragged into something that did not happen within the premises of the campus.” 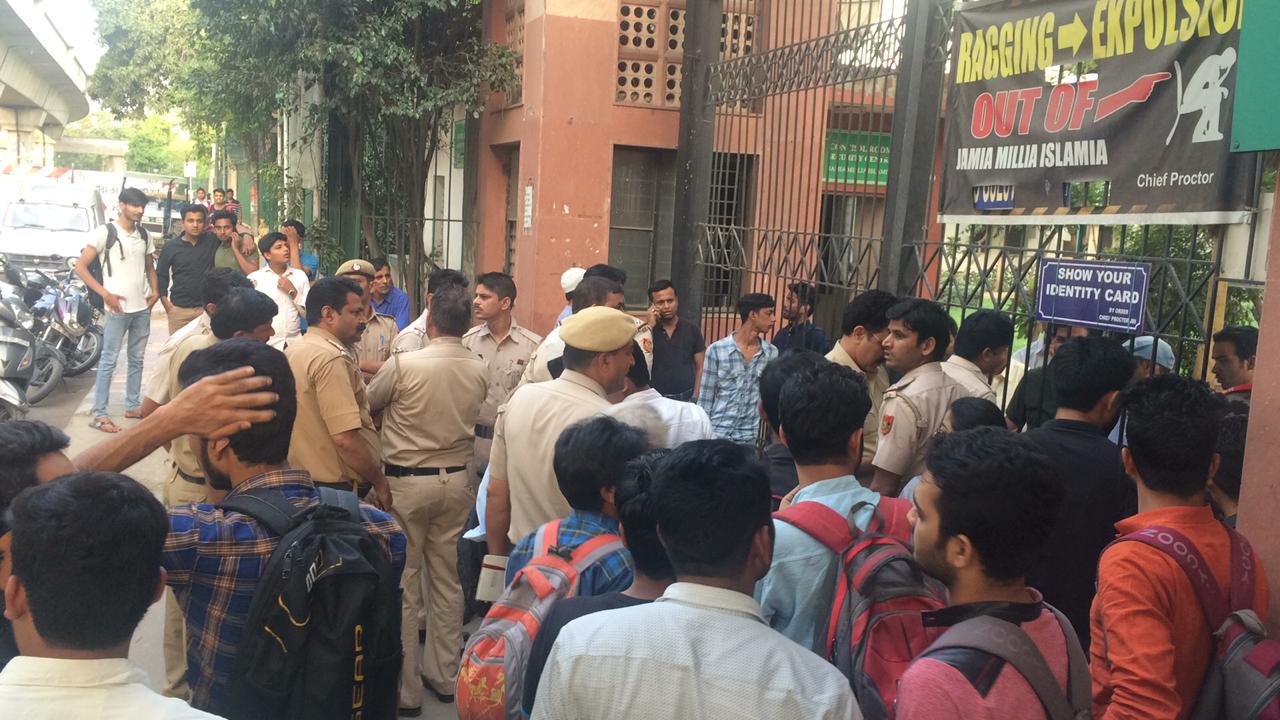 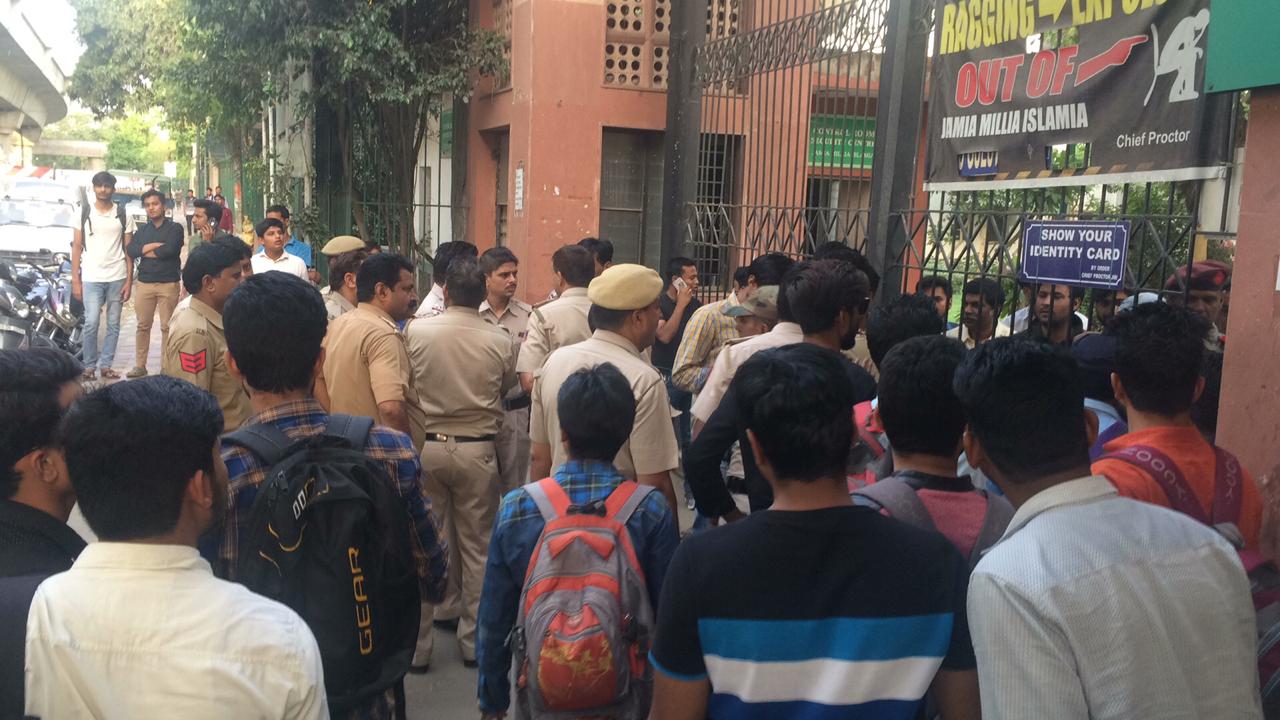