It is Modi Vs Siddaramaiah in Karnataka

CM in trouble in Chamundeshwari

BENGALURU: It is not easy for a Chief Minister with five years incumbency behind him and facing an aggressive opposition to retain his spot in the sun as it were during elections. But Siddaramaiah has managed to do precisely that in Karnataka, shaking off the anti-incumbency factor with some ease and confronting the Bharatiya Janata Party head on.

In the process this astute politician has emerged as the top local leader, his stature diminishing that of BJP’s B.S. Yeddyurappa who is widely recognised as corrupt by the electorate, including BJP voters here. The BJP vote here is for Prime Minister Narendra Modi who remains popular although there has been a dip since 2014 where the support was very enthusiastic. But the BJP is optimistic that Modi’s popularity with president Amit Shah’s crafty strategy for the state polls will make it emerge as the single largest party, even if in need of a complete majority.

Siddaramaiah is also an indefatigable campaigner having drawn up a hectic election campaign. His Twitter team independent of the AICC is doing an excellent job on the social media, keeping the CM not just visible with wit and humour and often direct barbs at the PM but far ahead of all in the fray. His tweets are now awaited with some anticipation by journalists and political leaders alike in Bengaluru, generating considerable laughter and discussion.

The CM is one of those old time politicians who know their respective state backwards. Of the genre of N.D.Tiwari, Kamlapati Tripathi, V.P.Singh in their knowledge of Uttar Pradesh, the districts, the villages, the composition of the constituencies, the issues. And unlike Punjab where Amarinder Singh won but could prepare for the polls only at the nth hour after his name was cleared by the Congress ‘high command’ Siddaramaiah has been preparing for the Assembly elections for the past two years at least.

And has done so with a verve that has made the BJP shaky with the Prime Minister increasing the number of his public rallies to 21, fully aware that the Yeddyurappa factor is not working positively for the BJP. In fact the corruption tag this time has stuck to the BJP choice of candidates including the Reddy brothers who are now very visible in supporting candidates for whom they have helped secure the seats. And in the process the PM has tried but not drawn blood with his allegations of corruption against the CM who actually enjoys a honest image in the state. Besides the non-governance issue has also dried up to some extent as he has managed to fulfil the majority of the 160 promises he made, and for once the Congress machinery---both government and party---has managed to propagate this. Travelling in the hinterland this reporter was surprised to find villagers speaking of this, even those who were not necessarily voting Congress.

PM Modi is the key BJP campaigner in Karnataka with the party now without a local face. He is in direct combat with Siddaramaiah who has kept his Twitter campaign focused on the Prime Minister with the Congress strategy actually dismissive of Yedurappa as even a candidate of consequence. The Lingayat vote and regionalism are two major issues raised by Siddaramaiah to cut into the BJP appeal and as a senior Congress leader said, “there has been a section of the Lingayat community that has supported us but now if we manage to cut into those with the BJP that will be a plus.”

All the Lingayat Mutts have extended support to the Congress party under Siddaramaiah although this does not mean the shift of the majority Lingayat vote to the party as it were. However, there is considerable optimism within that the Congress will gain because of this strategy, although the BJP has been working hard to blunt it by working on the other communities to react to this ‘favouritism.’

Siddaramaiah has also managed to put the BJP on the back foot on “Karnataka pride” that has been linked with the language and a separate flag. On both issues the BJP is reticent, a fact noticed by the electorate.

The AICC is backing the CM. For once no games are being played and the two---state and New Delhi---seem to have divided the work well. Congress president Rahul Gandhi who has his own teams working on the social media, research has kept himself as the ‘add on’ factor with the CM central to these elections. As Rahul Gandhi said at a press conference yesterday, the elections are for Karnataka and the leader is Siddaramaiah. He also made it clear that the CM, unlike the BJP candidate, had a clean image, had worked hard, and was popular. AICC leaders had been entrusted with addressing press conferences every day in Bengaluru and Mangalore in what was a slightly stretched strategy but did ensure some visibility. Besides this interactions were regularly held in Bengaluru, a city where Modi seemed to have a better hold than the CM, between Congress leaders and civil society sections with the focus on the youth. Apart from Rahul Gandhi, others like Jairam Ramesh and Shashi Tharoor were deployed by the party for these meets.

In Karnataka Rahul Gandhi was happy to play second fiddle to the CM, but in the case of the BJP Yeddyurappa was completely eclipsed by PM Modi. He remained the star campaigner with Amit Shah the runner up, both with indefatigable stamina. A young student in a cafe said with an American accent that she would be voting Modi. Why? He has done a lot? Like what? Well my family will be voting BJP and so will I.

Another young man who will be a first time voter on May 12 was clear that he would vote Congress. The BJP is too communal and divisive for me, he said. And then added, “too primitive.” What about Modi? What about him, he responded with a smile.

Siddaramaiah is the target for both the BJP and the JD(S). Gowda does not have a major problem with the Congress but definitely with the CM and has put all his effort into ensuring his defeat in Chamundeshwari where the wicket has indeed become sticky for Siddaramaiah. The Citizen found the JD-S support base very vocal in favour of the sitting candidate, and openly criticising the Chief Minister for doing nothing for the constituency. He visited it on the penultimate day of the campaign, and clearly this has become a tough seat for him.

The CM moved to Badami in North Karnataka, as his second seat for these elections. According to the Congress he did this to cut into the BJP influence there with the local Congress leaders in Chamundeshwari pointing out that “his contesting from Badami will have an impact on the entire belt there.” The BJP is focused on defeating him here with Amit Shah holding strategy and other meetings to whip up an anti-Congress mood. This seat is not a walk over either but the Congress is optimistic of winning both because of his “image and work.” Difficult contests despite the claim with Siddaramaiah himself hitting out at the BJP’s efforts to communalise and polarise the voters in Badami.

Significantly Siddaramaiah’s son is sure to win from Varuna, the seat he left for him, and where the strong support for the CM is more than visible. The popularity, however, has not transferred to the adjacent Chamundeshwari where the JD-S holds sway. More on May 15 when the votes are counted. 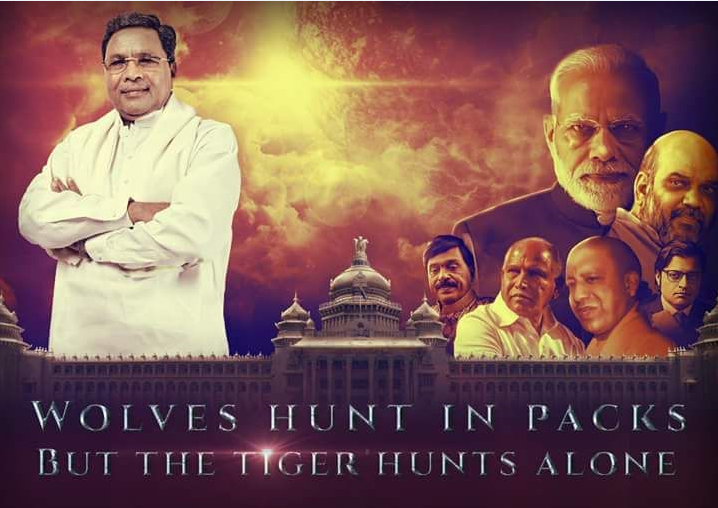