AMU Rises in Protest: Students Send a Copy of the Indian Constitution to PM and CM As 1000's Sit in Protest

ALIGARH: A mob that tries to disrupt harmony in Aligarh Muslim University followed by a brutal police lathi charge on students protesting against this has left the campus seething. The tension is high, and every evening thousands of students and teachers---now joined by students from Jawaharlal Nehru University, Allahabad University and other campuses---gather at Bab-e-Syed, the main gate with speeches, slogans and protest songs going on till late night.

The numbers are increasing every day with the University authorities watching the situation, and keeping “fingers crossed” every evening since May 2 when the right wing goons entered the campus shouting for the Jinnah portrait to be brought down. That this happened when former Vice President Hamid Ansari was present in the campus was not seen as a coincidence. 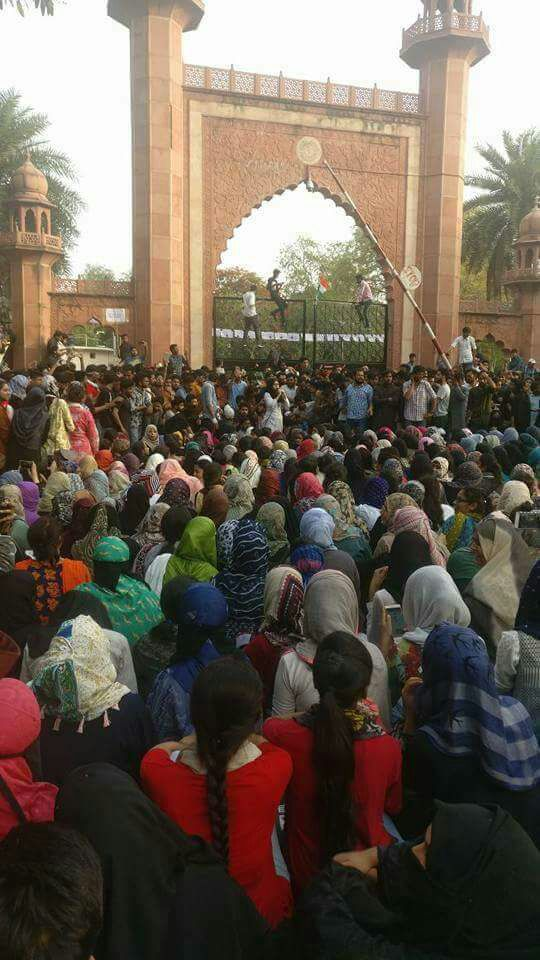 Wajahat Jilani, a AMU Law Faculty student told the Citizen , “Students have been sitting inside the campus near the main gate and there are student activists, teachers, from JNU, Allahabad University. After the lathi charge there was a possibility of further tensions which is why the student leadership decided not to push the protest outside.”

According to Jilani, the nature of the protest is peaceful and democratic but the students are sticking to their demands. They have sent a copy of the Constitution Of The India and a pen to Prime Minister Narendra Modi, UP Chief Minister Yogi Adityanath and the Human Resource Development Minister to remind them of constitutional rights. This has been sent along with letters from the AMU Students Union. 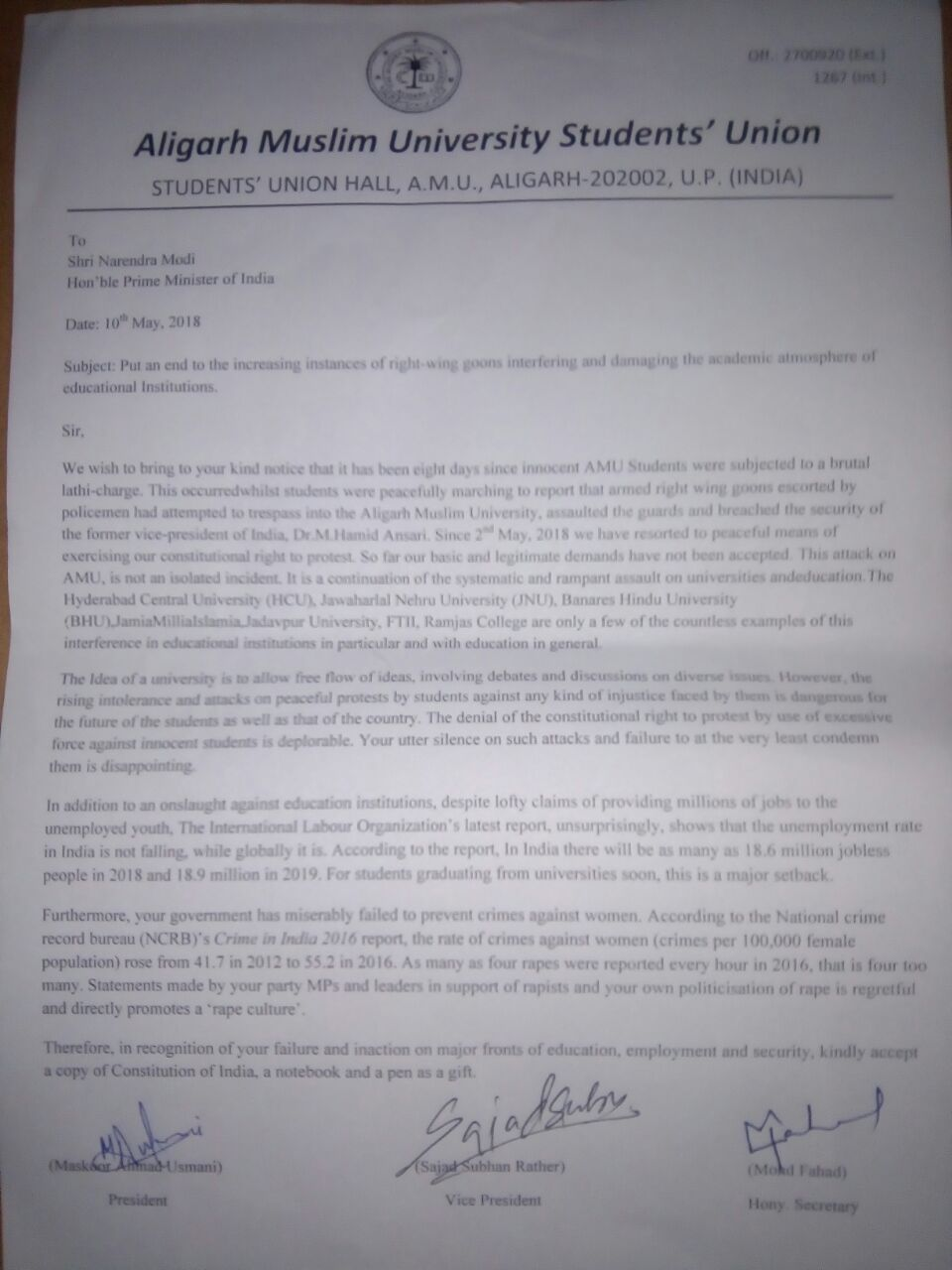 The portrait was hung because he was given the lifelong membership by the Student’s Union and shares space with other leaders of the time Mahatma Gandhi, Maulana Azad, Jawaharlal Nehru, Usmani pointed out.

Jawed Naqvi, a senior journalist said, “ The target is not Jinnah, but Indian liberals. It is not surprising that those who hate Jinnah are not ardent fans of Nehru and the Left either. There’s no logic to what mindless hordes do to pander to their notions of nationhood on either side of the border. The explanation to the latest round of vandalism was, however, rooted in realpolitik. The Karnataka assembly elections are due to be held on May 12. The Congress party rules the state. The Bharatiya Janata Party sees the polls as its gateway to southern India but it is struggling to find a durable toehold anywhere in the south.

It was not possible for the BJP to communally polarise the Karnataka elections with violence — a ploy that usually works for it — in a state under Congress rule. The hoodlums were unleashed in far away Uttar Pradesh on May 1 over Jinnah’s portrait. TV channels betrothed to Hindutva transmitted the violence to middle-class drawing rooms in Karnataka dutifully.”

Right now talking about the current atmosphere, the President of the Student Union said, “ We are currently holding a peaceful protest lodging an FIR related to the events that happened when Hamid Ansari was to be given the lifelong membership. What saddened me was when they named Lord Ram’s name to manifest their political propaganda.”

Jilani further said, “ A report that was published a few days back says, there was a Right to Information copy filed by a Delhi based Professor on September 17 asking them about the need to have Jinnah’s portrait in the AMU’s Student’s Council Hall. This RTI was discussed in the highest decision making body which is the AMU Court. The panel included five Lok Sabha members who were appointed by the Central government themselves. So if the MP was concerned enough he would have raised the matter in 2017 itself, why is he raising it now?