Visuals of cops in plainclothes shoot unarmed protesters in Thoothukudu

NEW DELHI: “For those who are not yet aware. These are our Police commandos in civil dress shooting at civilians using self loaded rifle which are used to neutralise terrorist. These civilians had placards to defend themselves. This is called premeditated murder,” writes Antony Rubin, a Chennai based activist. A chilling photograph showing a policeman, dressed in plain clothes, taking aim at unarmed, unprepared protesters accompanies the caption. 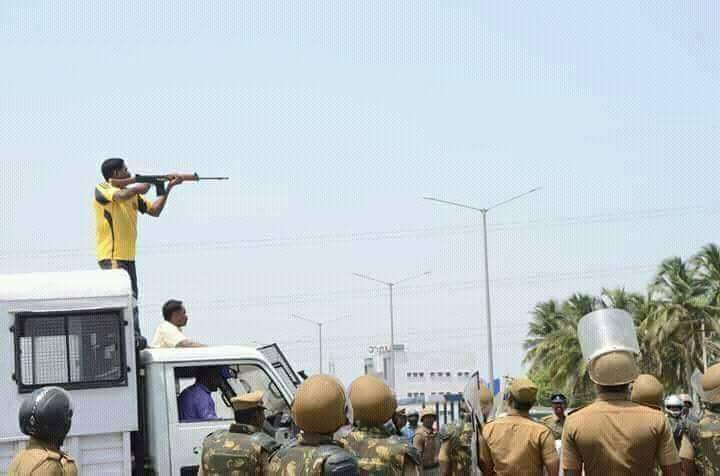 Tamil Nadu is simmering after at least 12 people lost their lives in Thoothukudu, as the police opened fire on a crowd protesting against Sterlite's industrial plant in Tuticorin.

Anger has reached a boiling point, with many young people taking to Facebook and Twitter to call out the state for its use of heavy handed force. The mainstream media is also a target of this anger, as the narrative that emerged on TV screens and national newspapers glossed over the violence, taking the official Tamil Nadu government stand that police action was unavoidable.

Visuals telecast by local channels in Tamil Nadu however show policemen in plainclothes taking aim at the crowd of protesters from atop a vehicle. The video shows a policeman in a yellow shirt firing a rifle from the vantage point of the van, joined soon by a colleague in a black shirt who gets on top of the van and lies down to take aim. Locals say that the police took aim from other vantage points, including roofs on buildings, as well.

An directive from the State Chief Secretary to the telecom operators in the state instructing them to block internet access in certain districts has contributed to the rising anger. The clamp down is seen as part of the larger cover up by the media and ruling establishments in both Tamil Nadu and New Delhi. A copy of the letter circulated on social media is as follows: 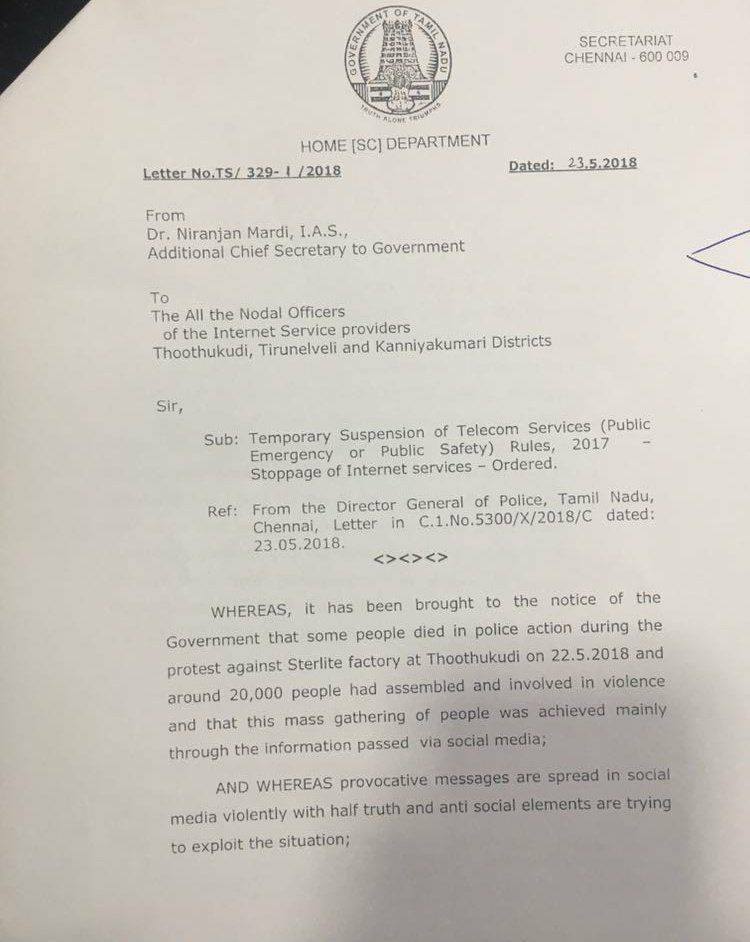 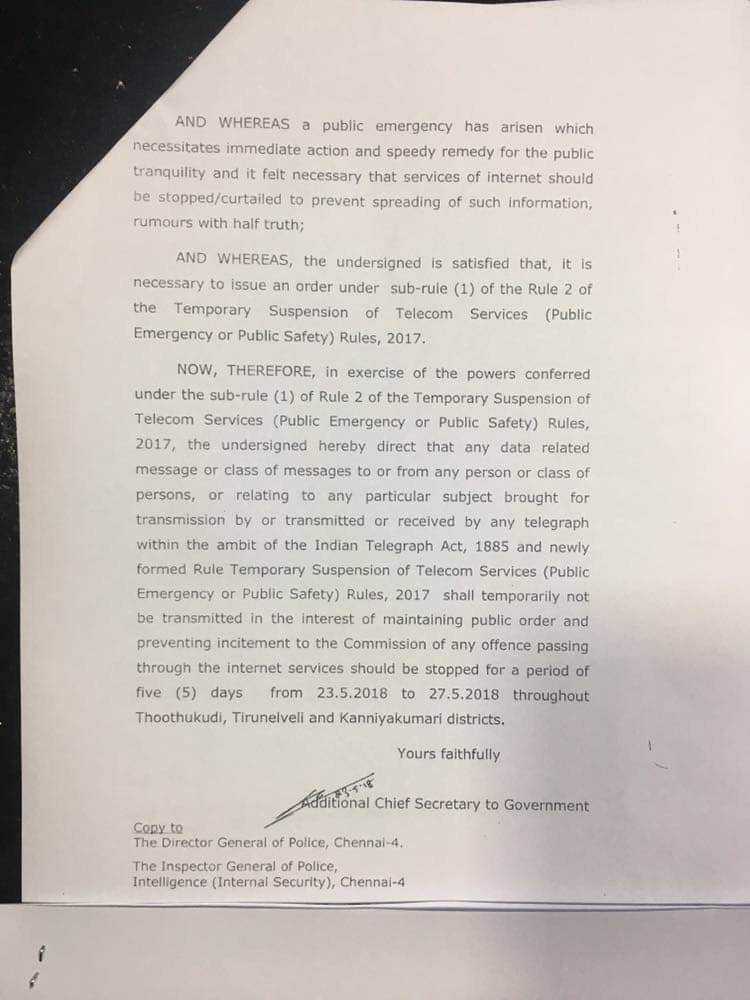 Residents have been demanding the closure of the plant, citing that the pollution it generates is causing serious health issues. The agitation against Sterlite Copper, which represents the copper unit of Vedanta Limited, which is a leading resource distribution company, recently escalated after the company announced the expansion of its unit in the city. Sterlite Copper, which currently operates at around 400,000-tonne per annum unit in the city, maintains it has received necessary permits and has not violated any norms. The Madurai bench of the Madras high court has put a stay order on any further expansion of the plant post the situation of recent violence.

According to reports by news agencies, the months-long protest for the closure of Vedanta’s Sterlite Copper unit in Tuticorin turned violent on Tuesday. As per police officials, around 5000 protesters gathered in and around the local church and wanted to take out a rally to the local district Collectorate office which later turned violent. Meanwhile, a state minister said that though the government appreciated the sentiments of the protesters, police firing had become unavoidable.

In the last one year, protests have covered almost every length and breadth of this country; starting from the ‘Mega Farmers Rally’ in Maharashtra to the ‘Dalit Mahapadv’ and the ‘Dera Saccha Sauda’ protests. Almost all the protests have received brutal repression from the State and its agencies. The right to protest is one of the fundamental rights enshrined in our constitution, however the recent developments in the country don't seem to be holding on to that right.

“The recent developments in the country are very worrisome. In Rohtak, Haryana, there are only certain areas where you can protest which are far away from the city.”, claims Jagmati Sangwan (founder of All India Democratic Women Association).

On May 12, there were massive reports of violence in the roundup to the Panchayat elections in West Bengal. One of the most contested regions in the local body polls was the area of Bhangar which lies on the NORTH-24 paraganas. There had been tension brewing in that area from last year regarding the expansion of a private power grid project and its impact on agricultural life. Hafijur Rehman who was leading Ishrafiq Mollah’s election rally, was later rushed to a hospital and declared dead. Mollah was contesting under the banner of ‘Jomi, Jibika, Paribesh O Bastutantra Raksha’ Committee. The committee has been agitating against the power project. The entire violence has largely been attributed to Mr Arabul Islam, a TMC leader from the Bhangar area, who has been a strongman for Trinamool Congress for quite some time now. Islam has been in ‘police custody’ after directions by the Chief Minister of the state. However there hasn't been any much of judicial progress.

Prakash Karat (Former General Secretary of CPI(M)) claims that Bhangar has been the epicenter of violence against civilian protesters for quite some time. “However, this is a general trend in Bengal, the violence against protesters was not only limited to Bhangar but extended to several other areas across Bengal in the Panchayat election roundup.”, he states.

In the month of June last year, there were about five farmers who were killed by police fire for demanding a rise in the M.S.P and pushing the government to not procure the onions at a throwaway price which was causing a huge loss to the farmers. After they took out a rally in Indore on June 5, they were stopped by the state police. On May 6 security personnel fired on protesting farmers in Mandsaur district, which ended up killing at least five of them. Ruckus followed post the shootings as there were also several properties which were vandalized. On June 6, Shivraj Singh Chauhan, the Chief Minister of the state ordered a judicial probe. However till this date there has not been a single F.I.R filed against any personnel as this act was justified as an act of self-defence by the police authorities.

“It is definitely unconstitutional to fire upon protestors. However, if section 144 has already been imposed in a particular area, it gets easier to justify such an act, as the law is generally objective”, states Aveek Chimney, a prominent civil rights lawyer.

Meanwhile in Jammu and Kashmir civilian deaths rose by around 167% from the year 2015, as stated by a recent report which has been released by the Home Ministry. This report comes amid the growing allegations by human rights activists over what they say, has been excessive use of force by the armed forces in the valley.

There were also several incidents in the country reported in the last one year where protesters were crushed to silence by the State agencies and in some cases non-state actors. This includes the Dalit Mahapadv violence in Madhya Pradesh where allegedly upper caste men were involved in killing the ‘dalit’ protests. Student protests such as the one in J.N.U which was a peaceful gathering suddenly turned violent after police restricted the movement and then lathi-charged the students.

There is also a specific problem on how we deal with women while trying to deal with protesters; in most cases there aren't enough women personnel for the police to be adequately equipped. “Women rights’ groups should actively focus on sensitizing police authorities and the public on how to deal with women in protests,” asserts Jagmati Sangwan.

However in the last one year, the debate hasn't just been restricted to whether the police is being held accountable for the killings which have taken place. It has also been rooted on whether such excessive violence is required at the very first place. Mohammad Salim, a senior Lok Sabha member of the CPI(M) claims that it was just not a case of isolated police firing in Tuticorin. “It felt like that the State was on a hunting spree.”