The Case of Aslam Ali, Now Just A Statistic in UP's Chronicle of Crime Fiction

Shamli encounter UP cops on a killing spree

NEW DELHI: On December 9 2017, a 26-year-old man named Aslam Ali, accused of Arms Act Violations, theft and robbery, was shot on his temple at Dadri by the Uttar Pradesh police.

Ali was one of the alleged criminals shot dead by the UP police in a series of infamous encounters since Chief Minister Yogi Adityanath came to power 2017. The UP government while boasting about encounters has a quibble only about the figures, maintaining only 32 persons in 1038 encounters have been killed by the state police and not the 50 claimed by the activists and the media. And that at least four policemen have also lost their lives.

A bounty of Rs.50000, was placed on the head of Aslam Ali by the UP police just a few days before he was shot. 12 cases had been registered against him since December last year. His wife Israna, 24, convinced him to surrender to the police as she was expecting their fourth child. She was nine months pregnant when her husband was killed.

Ali too apparently agreed on his surrender and around two days before the encounter he went to meet his lawyer Mausam Ali to begin the process. But apparently his file could not be found that day and hence they had to postpone it till the next few days. His wife further said that they had shifted to Jagadhari, in Haryana only a few days before he was taken away by the police.

Two days before the encounter, two men came to meet him at Jagadhari and asked him to accompany them for an unknown reason. The family could not contact him ever since that day.

According to the report filed by the UP Police, Aslam Ali was spotted at the Rupawas crossing on a bike with a pillion rider and he took a shot at them as soon as the police asked him to stop. The police claim to have “retaliated” with the shot in his head. The person with him on the bike fled the scene. Ali reportedly died on way to the hospital.

But it hasn’t come as a surprise where the depiction of Ali’s encounter seems to be very similar to all the other cases of encounter by the UP Police in the past two years. In contrast to the reports by the police where Aslam is said to have died in a retaliatory fight after a robbery, the postmortem report has spoken otherwise. A number of injuries including broken wrists and fractured knees with severe wounds on his back have been found which doesn’t fit to the story depicted by the police.

On June 3 and 4,2018 a delegation from the All India Democratic Women’s Association (AIDWA) visited a few families in Shamli District each of who have lost a member in this series of fake encounter in the recent past. 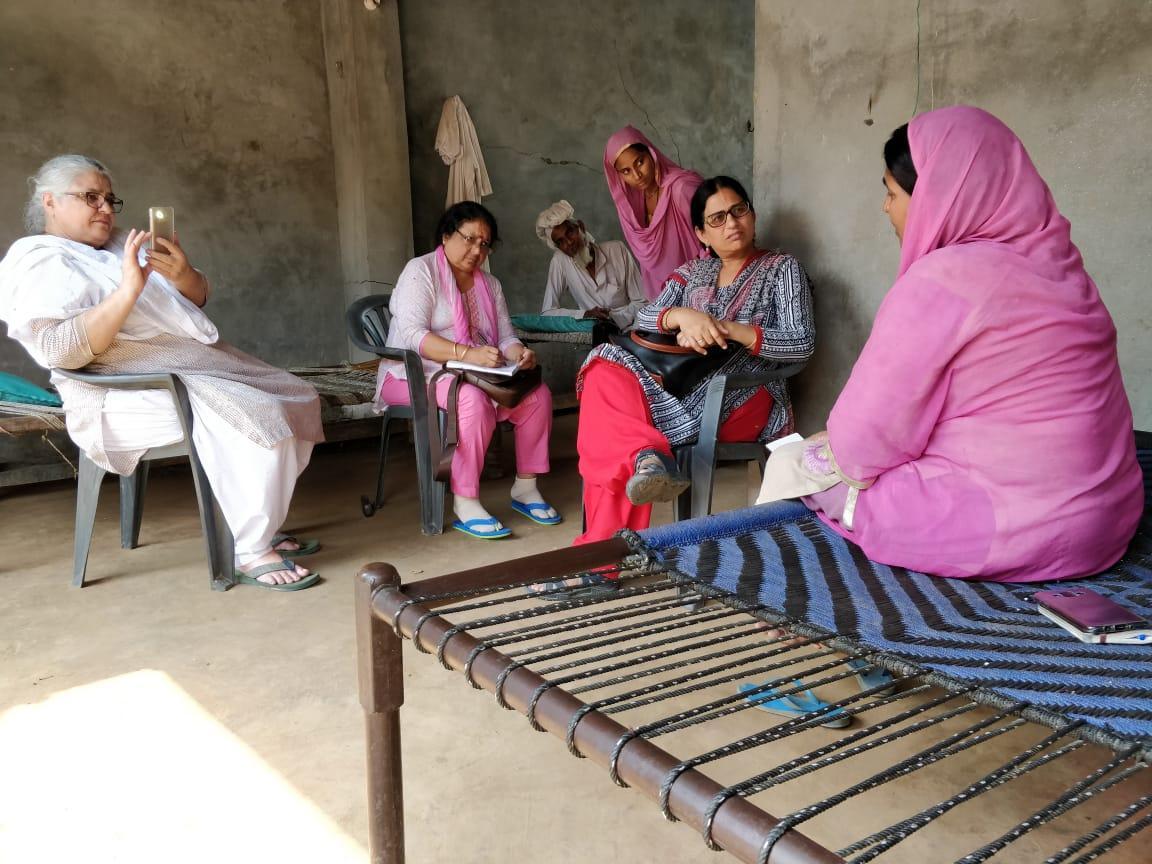 AIDWA Member Sehba Farooqui,said, “From what we could figure out from our visits in Shamli consistently for two days, we can say that these boys were mostly involved in only petty crimes in the past. Aslam was also accused of stealing hay from a village two years ago and he has gone to jail for that. But due to the increasing cases of loot, kidnappings and robbery in Shamli, pressure started to build up on the police to nab the gang members, including that of the infamous Muqueem Kala who is already in jail but his associates are still considered to be very active in the area. The gangs who are otherwise involved in these crimes are impossible for the police to get a hold on because they are too powerful. And hence the police usually resort to these petty criminals and mostly frame charges based on false allegations to do away with the rest of their responsibilities. After the hay theft, Aslam had to go to jail two years ago and once he was released, he tried to bring some level of stability in his life. He got married and even opened a small food joint for his stable income. But eventually he had to move to Haryana due to the constant harassment by the police.”

As per the testimony provided by Aslam Ali’s mother, two ‘Mukhbar’ (men who didn’t belong to their village) came to meet him at his house in Shamli and asked for his phone number. They left the house after his mother denied from giving any information to them but assured to convey any message they had for him if he happens to contact his family anytime soon. Two days later his family was told that he was shot by the police at Dadri near Noida.

Aslam Ali’s mother further added that when his body was brought to the house in Shamli from the police station, police vans were following them all the way to his house and asked the family to bury his body within an hour. And while washing the body for the last rites before burying him, severe injuries were found all over his body.


(Aslam’s mother in conversation with AIDWA)

The after-effects of these encounters impact badly on the family, rendering them destitute. Ali’s wife, Israna, who is a mother of four now, along with the rest of his family, is left with no hopes. Farooqui told The Citizen, “Women like Israna lead a very vulnerable life because most of them are uneducated and have no source of income. The situation sometimes go out of hands to such an extent that, in case of Israna for instance, she has been offered the option to marry one of her brothers-in-law who is not more than 14 years of age. AIDWA is trying its best to rehabilitate women like her by providing them a permanent source of income.”

The consistent pattern that is visible in all the encounters that has taken place in Uttar Pradesh recently includes the police firing only as retaliation and only as a way of self-defense. But from the various media reports and investigations carried out by various journalists independently, these stories seem to tell a different tale. Men like Aslam, Naushad, Akbar, Mansood, Furquan and Sarwar are only a few names who have been made obvious scapegoats by the police under the garb of justice, which has been famously termed in sections of the media as a ‘chronicle of crime fiction’ in Uttar Pradesh in recent times.