Qasim lynched, Samiuddin who tried to save him in ICU

NEW DELHI: Mohammad Qasim, a 45-year-old cattle trader, was lynched to death on the evening of June 18 by a hate ridden mob that was mobilised by rumours of cow slaughter.

Just like in Dadri that constituted one of the first such incidents, a call was made from the nearby Devi temple asking people to gather at the spot as cow killers had been caught red-handed. Another elderly man, 67 year was critically injured when he intervened and tried to pacify the self-claimed cow vigilantes. He is struggling for life in a private hospital in the district.

The Citizen Bureau adds: Meanwhile yet another video of a mob forcing a ‘confession’ from a visibly injured and terrified Samiuddin has gone viral on the social media. The brutality is evident.

The injured victim, Samiuddin’s elder brother, Mehruddin addressed the media in Delhi and said that his younger brother was in his field gathering fodder when the mob attacked Qasim. He intervened to try and save him. The frenzied mob chased him and Qasim, tied their feet and mercilessly beat them. They were dragged to Bajhera village and were further brutally assaulted near the Devi temple.

When the family hearing the news rushed to the police, they misguided them and insisted that Samiuddin was in police custody.

Finally around 6pm evening, the family was informed that he was in Nandini Devi Hospital in Hapur. When they reached the hospital they saw that he had received no medical treatment from 12pm when he was caught and beaten until 6pm when they finally found him. Samiuddin is still in ICU in a critical condition with multiple fractures and internal injuries fighting for his life.

Mehruddin narrated the agony when the family approached the police to get justice and protection. Shockingly the police tried to divert the incident from a case of hate crime to “road rage”. The victims kins categorically refuted police claims of the attack being a case of “road rage”with the videos of the incident carrying clear mention of this being motivated by cow slaughter rumours.

Grief-stricken Nadeem, Qasim’s younger brother addressed the media and said that his brother, a cattle trader, used to purchase buffalos and lambs from nearby villages and sell them. He said that Qasim received a call around 11 am saying that a person wished to sell his cattle. Nadeem said his brother rushed to the nearby village. When he reached the spot he waschased, tied and beaten to death for being Muslim under the false allegation of cow slaughter. Around 3.30 pm the family got a call from the police who informed them Qasim was no more and the body was handed over to them. 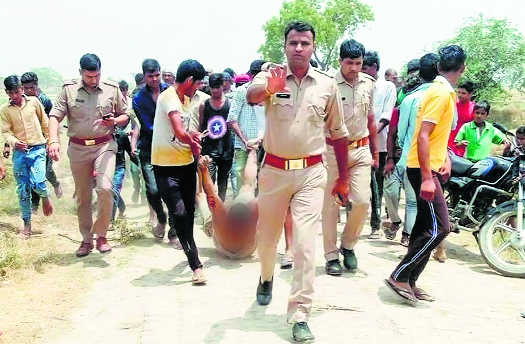 No FIR has been lodged by Qasim’s family because the police told them there was no need of two separate FIRs for a single incident. An FIR is lodged under IPC sections 147, 148, 307 & 302 by Samiuddin’s family. Only two persons have been arrested so far. Qasim’s family is not at all satisfied with the police investigation and was in Delhi pleading for justice. The case has been lodged by the police as of “road rage” and not linked with cows.

Both the victims family are economically very weak and poor. Qasim was the eldest among four brothers and is survived by six children and his wife. Injured Samiuddin has five daughters and two sons. Both victims were the sole breadwinners of their families.