Sack Him: Journalists Flay BJP MLA For Incitement to Violence

NEW DELHI: On June 22 while addressing a gathering of journalists from Jammu, Lal Singh, the former Minister for Forest, Environment and Ecology for Jammu and Kashmir in the PDP-BJP coalition government, stated, that the journalists of Kashmir, had created a wrong “mahaul,” environment. He further added, “I would, now, like to ask journalists from Kashmir, to draw a line. To decide how they want to live! Do they want to live through what happened with Basharat?” referring to the recent murder of Shujaat Bukhari, a senior journalist from the Valley, and, the editor of Rising Kashmir, a popular English daily. In an opinion piece for The Tribune, Zafar Meraj, a fellow senior journalist from Kashmir, had stated that in the death of Bukhari, Kashmir had lost, “not only a fearless journalist, but also a strong votary of peace.” The investigations into the murder are underway.

Lal Singh went on to threaten the journalists, directing them to, “draw a line,” so that “bhaichaara,” brotherhood, or fraternity, is maintained and doesn't “break,” into a plague of “Shujaat like incidents.” So that “progress” and development of the State continues. He told journalists to censure themselves, “apne aap ko sambhale.” The former MP had had to resign, back in April, post the controversy he had fueled by attending a rally in support of the accused in the Kathua rape case.

As soon as the video started doing the rounds of the Indian internet, individual journalists came together to protest against the aggressive display of intolerance.

Attack on the Freedom of Press: Paranjoy Guha Thakurta, a senior journalist and political commentator told The Citizen, “ It’s not the first time he ( Lal Singh ) has conveyed these kind of messages either verbally or by his actions. The statement given by him is extremely offensive and on a different day, in a different regime, this man would have been arrested.” He also added, “It’s an open threat to all the journalists that if they don’t report the way they tell them to then they’re gonna meet the fate of Shujaat Bukhari.”

Saeed Naqvi, another senior Indian journalist and interviewer, further questioned if the ruling party wants “journalists from Jammu & Kashmir to write their copy under the State standing with a revolver to their heads? ”

“This is what Lal Singh appears to have said, and unless he retracts this horrible statement, the President of the BJP, Amit Shah, should take note. His silence is an endorsement of that journalists must toe the line or expect Shujaat Bukhari’s fate,” he continued. Mentioning the Opinion piece on Kashmir he recently wrote for The Citizen, he continued, “Almost on cue, exactly as I had written in my column yesterday, Amit Shah and Lal Singh have stirred up the communal cauldron.” The story had read, “By the act of Partition and the sleight of hand in Kashmir, India trapped itself into a triangle. The three sides of this triangle are actually three axes which are New Delhi-Kashmir; India-Pakistan; Hindu-Muslim.”

On Twitter television journalist Barkha Dutt reiterated “open incitement to violence is ground for arrest” while mentioning the Director General of Police (DGP) of Jammu & Kashmir (J&K) Shesh Paul Vaid in her tweet. Senior journalist and ex-CEO of NDTV, Vikram Chandra, asked, “ How it is acceptable to openly threaten media like this?” 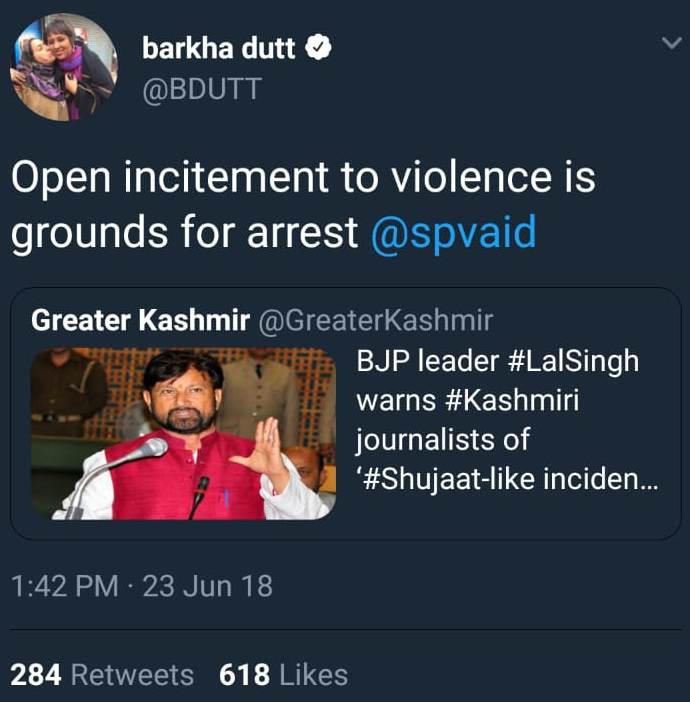 Nature of Elected Representatives and Public Leaders: Hartosh Singh Bal, a senior political editor at The Caravan magazine, said, “ Incidents like these tells us the quality of MPs and MLAs BJP have in their party, these guys sound like hoodlums rather than elected representatives”. He also added, “ threats that these leaders issue are more likely to be the words of gangsters”.

Rajdeep Sardesai, one of the very few news anchors who’ve had the chance to interview Modi, in his unscripted days, emphasised the brazenness of the ex-MLA’s statement, especially in light of his political position. 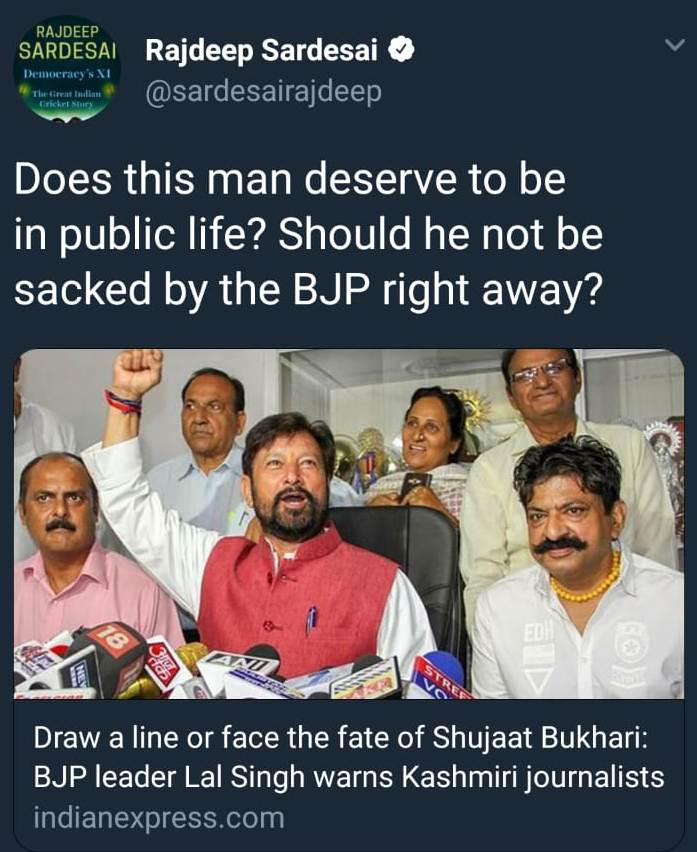 Even Aditya Raj Kaul, Associate Editor at the Establishment-friendly Republic World, continued along the same lines, saying, “BJP’s Lal Singh is such an embarrassment. One can’t point out which of his all statements are more juvenile, immature and outrageous. He was a liability for Congress, and now is for BJP.”

The Murder of Shujaat Bukhari: Perhaps most significantly, the Kashmir Editors Guild issued a statement which strongly condemned the “criminal remarks” of Lal Singh Chaudhary. According to The Kashmir Observer, the editors body said, “Singh’s statement indicates that he holds some information about Bukhari’s murder and must be investigated. KEG reserves the right to lodge a police case against the lawmaker who, earlier as well, named a number of reporters for his fall from grace in wake of the Kathua Probe, now in a trial stage.”

They add that “the guild was perturbed over the sluggish pace with which the investigation into Bukhari’s murder is moving ahead.” Fahad Shah, an independent journalist and editor at The Kashmir Walla, raised similar concerns, in his tweet which read, “So BJP’s Lal Singh is threatening to journalists of death and says why Shujaat sb was killed. Are we missing something here?” (This has no links with the Editors Guild of India)

Several politicians expressed their concern, including Omar Abdullah who mentioned how the death of Shujaat Bukhari was being used a tool to keep other journalists under restraint. There was a cruel sense of detachment included in the ex-MLA’s use of the murder as an object to represent a particular ‘kind’ of journalism, which adds a lot to the social media rampage around the investigation and several thousands of tweets suggesting alternate theories — even as supporters of the ruling party hype it up as yet another instance of islamic terrorism.

Saikat Datta, the South Asia Editor at Asia Times, tweeted, in referring to the incident, “This in a state which has had “Shujaat Bukhari Incidents.”

With the Amit Shah controversy raised by the IANS story, put up and then taken down, the BJP hasnt been gaining a lot of good press recently, and it sure seems to have way too much on its plate, even as it tries to turn it all around and celebrate the 43rd anniversary of the Emergency as a ‘Black Day,’ whatever that means.