NEW DELHI: Lok Sabha Speaker Sumitra Mahajan finally accepted the No Confidence Motion that the Opposition had sought to bring in during the last session of Parliament. A first since 2003, the Speaker said that she will fix the time and date for the discussion “soon.

The no confidence moved at the instance of former NDA ally Telugu Desam, and joined by the Congress and Nationalist Congress Party will not endanger the government that has 273 MPs in the Lok Sabha. But it is significant for the Opposition for the following reasons:

1. A no confidence that needs 50 MPs to endorse it before being admitted is in itself a political indictment of the government.

2. It gives the Opposition parties a platform to cite the issues for which they have lost trust in the government. This in what is the last Parliament session before the Lok Sabha polls will feed into a common opposition agenda for the elections.

3. The Opposition parties are also using it to establish the two sides of the fence, and nudge regional parties like the Biju Janata Dal to take a firm position ahead of the elections.

The government was reluctant to admit the no confidence for precisely these reasons. 13 days in the last session were lost as the Speaker blocked the motion, and the Opposition parties came together in protest. Today, in a volte face Speaker Mahajan asked the Opposition MPs supporting the motion to stand for a head count that confirmed not just the requisite 50 but many more were endorsing the move. She then said that the motion has been accepted and will be discussed very soon.

But this capitulation has a recent history in the form of a letter signed leaders in the Lok Sabha of all the major opposition parties to the Speaker in response to her missive to MPs to ensure smooth functioning of the house. And in doing so pointed to crucial Bills being passed in the last session without meaningful debate;large number of Bill deprived of due scrutiny by the Standing Committees prior to being considered by the House; Bills having a bearing on Constitutionally guaranteed rights being converted into virtually the 'Single-House Bills' by way of certifying them as Money Bills.

The MPs went on to add, “ Unfortunately, the Government could not only bulldoze the House to get the Budget 2018-19 passed in din without any debate and discussion, but also sneak in most unconnected, retrogressive and anti-democratic measures by way of introducing inadmissible amendments to the Finance Bill and pushing them through without the world knowing what was happening in the temple of world's largest democracy.”

The letter, however, focused on the no confidence motion and reminded the Speaker that she had no authority to block the motion when it had been endorsed by 50 MPs as per the rules in the House. It categorically reminded her, “The Budget Session - 2018 also was witness to another trend which, to say the least, will prove to be lethal to our Constitutional Democracy, if not checked. As you are fully aware, Madam Speaker, the concept of 'no confidence' flows from Article 75 (3) of the Constitution, which reads as under:

*The Council of Ministers shall be collectively responsible to the House of the People."

That is the reason why the Rule 198 of Lok Sabha Rules doesn't vest any discretionary powers in the Speaker as far as admissibility of the No-Confidence motion is concerned. Once 50 Members stand in favour of the Motion sought to be moved, the Speaker has to announce that the House has granted leave (permission) for no confidence motion to be taken up. The Speaker has no discretion. It is the House which decides admissibility.”

And went on to recall the 13 days during which “we were all witness to the disastrous manner in which the notices given by various parties were dealt with, including one given by a party which was till recently a trusted ally of the ruling party. The utter disregard to the Rules and the Constitution displayed by the ruling dispensation did not add to the glory of the Chair and the House.

We have seen how, day-after-day, for thirteen consecutive days the House of People was not even allowed to decide on the admissibility of the no-confidence motion. For all your concern for the image of our Parliament globally, this ignominious chapter in the history of Indian Parliament has no precedent world over. With deep sense of regret, we must place on record, the anguish we felt when media editorially commented not so charitably on the role of the Chair in this entire episode. Any aspersion cast on the Chair reflects poorly on the Members of that House as well. And we are not prepared for this kind of 'reflected glory.”

The letter, carefully and strongly worded, left the Speaker with no option other than to admit the motion. It was signed by the following: 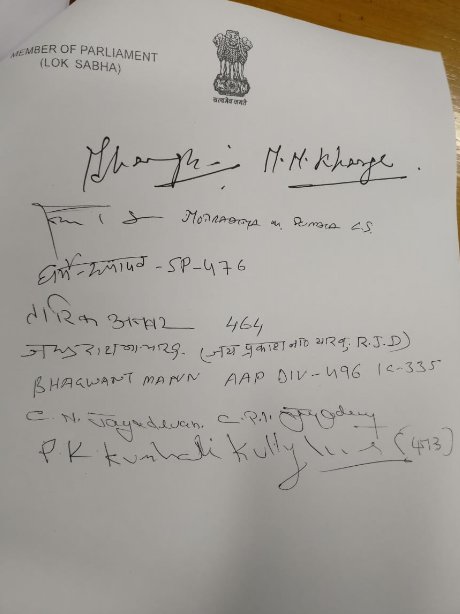 The government has now declared that it will face the no confidence with equanimity. However, the very fact that most political parties in the country will be joining issue with the BJP is not something the government wanted just before the polls. The Opposition is in touch with the BJD, but also with the Shiv Sena to join the no confidence. It has still kept its options open although the BJP is confident that after the Amit Shah-Thackeray meeting recently it will be spared this ignominy. Maharashtra Chief Minister Devendra Fadnavis has said that he is sure that the Shiv Sena will remain with the NDA on this.