NEW DELHI: An alleged attempt was made on Jawaharlal Nehru University (JNU) student Umar Khalid’s life in the heart of New Delhi, on Rafi Marg, just outside the Constitution Club. Scheduled to speak at a meeting inside, he was having tea with a few friends when he was reportedly approached by a man who pushed him, and reportedly fired at him with a pistol.

In the chaos this has been impossible to ascertain, with the organisers and eyewitnesses insisting a shot was fired, and the police equally adamant that there was no firing.

According to the organisers who spoke to the Citizen, Khalid's alert friends pushed the man away even as he was taking out the pistol, because of which the bullet hit the ground and not Khalid who was only inches away.

The man ran they said; the others with Khalid gave chase; he fired again according to eyewitnesses and managed to get away. He dropped the pistol on the ground as seen in the photograph. The police is at the spot, with the meeting on “Khauf Se Azadi” (Freedom from Fear) delayed but on track, according to the organisers who spoke to the Citizen. 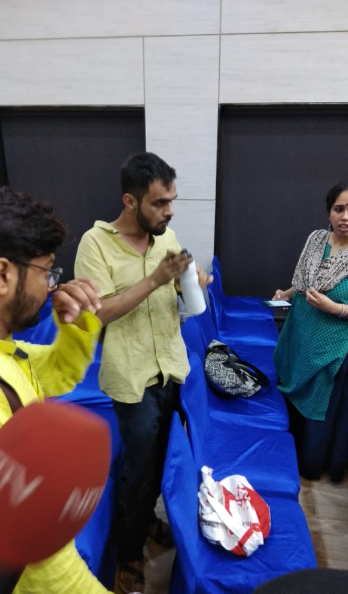 Khalid remains a target of rightwing groups, and has been facing threats, abuse, and harassment on a daily basis. This has not deterred the young man, who continues to speak his mind against what he has often described as rightwing terror.

At this meeting he was to join Prashant Bhushan, Manoj Jha and others along with the widows of men lynched in recent months by cow mobs. Dr Kafeel Khan, also a target of rightwing groups, was also invited to address the meeting, which was called by the organisation United Against Hate.

This is the first such direct attack of its kind in Delhi. Umar Khalid filed a complaint with the Delhi Police in June after receiving death threats from a man who identified himself as fugitive gangster Ravi Pujari. Around the same time Dalit leader and MLA Jignesh Mevani also said he had received a similar death threat. Khalid said in a tweet at the time that he had filed this complaint because the same person had issued similar threats to kill him as early as Feburary 2016.

The police had claimed to be investigating the threat, but clearly little has come of it.

Khalid and his JNU colleague Kanhaiya Kumar were close to journalist Gauri Lankesh, who as they said had taken them under her wing. They would stay with her when visiting Bengaluru, and had deep admiration and respect for her.

Lankesh was murdered by a Hindu organisation. The Karnataka police has arrested the accused in what appears to be a methodical and systematic investigation, confirming the links between her murder and those of other writers and rationalists in the state, and unearthing the conspiracy that took the journalist's life.

The Citizen reporter at the spot said that the police were denying that any bullets were fired. But all the speakers at the meeting were opening their remarks by mentioning the “attempt on Umar Khalid’s life”, and maintaining that shots were indeed fired.