NEW DELHI: Workers, peasants and agricultural workers from across the country came together for the Mazdoor Kisan Sangharsh Rally in Delhi yesterday, September 5. The rally saw the participation of almost a lakh of farmers and workers, organised jointly by the Centre of Indian Trade Unions (CITU), the All India Kisan Sabha (AIKS) and the All India Agricultural Workers Union (AIAWU).

This is the participants’ charter of demands:

- Fix remunerative prices for all agricultural produce at one and a half times the cost of production along with public procurement;

- Implement a loan waiver for peasants and agricultural workers;

- Implement the rural employment guarantee (MGNREGA) in all rural areas and extend it to urban areas;

- Provide relief and rehabilitation to victims of natural calamities; and

A special train from Nasik to Delhi and back was booked by workers and farmers. This AIKS special train carrying over 5000 women and men, most of them adivasi peasants from Nasik district, reached Delhi at 3 am on September 4. The rally started from Ramlila Maidan on September 5 at 9 am and moved towards Parliament Street, where CITU, AIKS and AIAWU leaders addressed the public gathering. 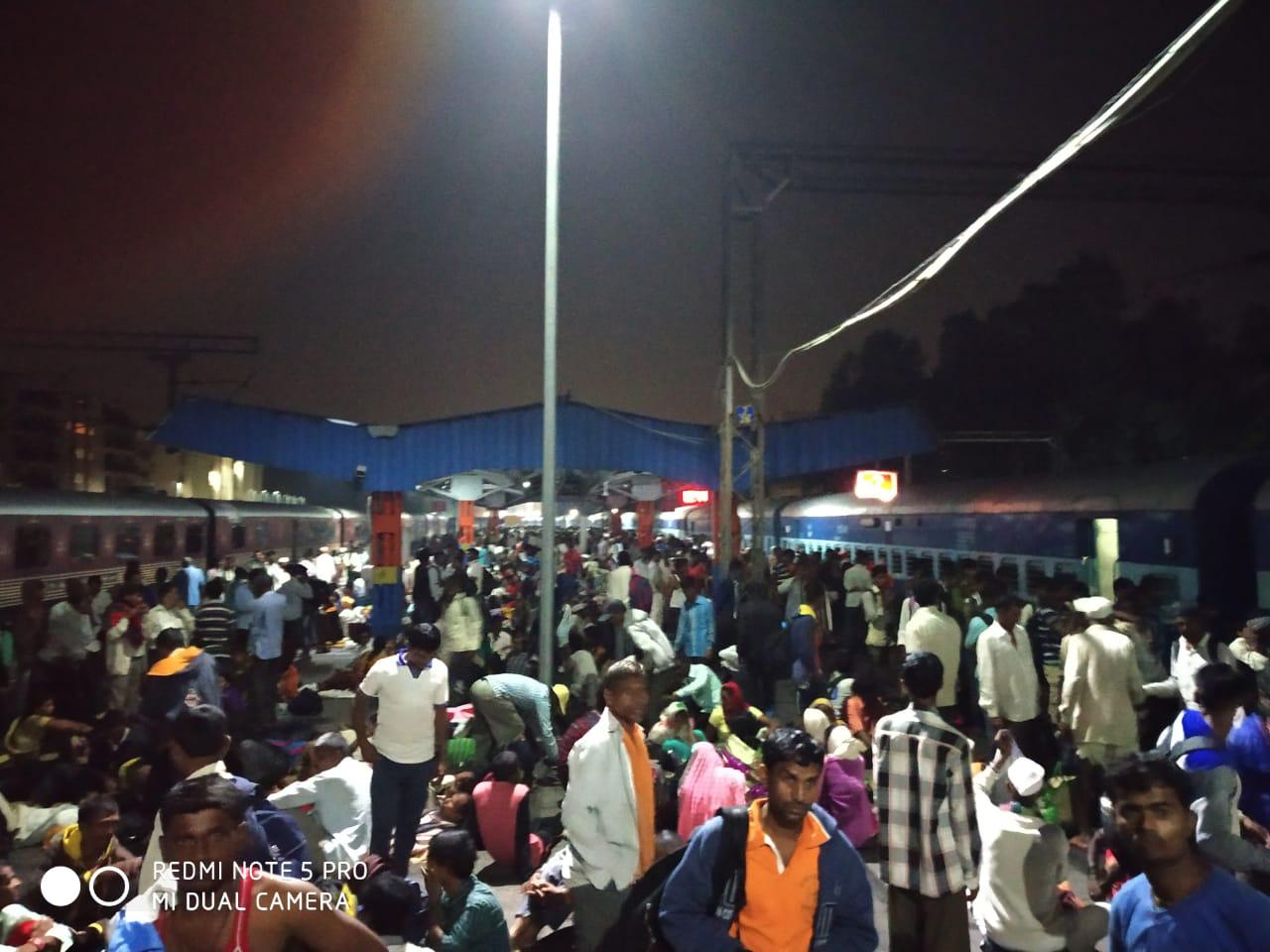 The special train from Nasik, Maharashtra to Delhi

The Citizen spoke with many of the participants; their accounts reflect the deteriorating society, social harmony and prevalent corruption amid which we all live.

Suvarna Biradar is an Aanganwadi worker. She and her peers came to Delhi from Bijapur district. They say they are not being paid enough compensation for the work they do – Rs 8000 per month – and are not paid on time, with payments usually delayed by two or three months and sometimes six.

They also lack basic infrastructure facilities in their district. Most of them are working in rented compounds and government hasn’t allotted them a proper official space with separate toilets or fresh drinking water. Sometimes they even have to pay the rent for it out of their pockets.

Suvarna says, “Everything is being done on paper, but you can’t see anything happening in our villages; and if we go and ask people from the district collector office, they show us the formal papers saying the project has been completed.” 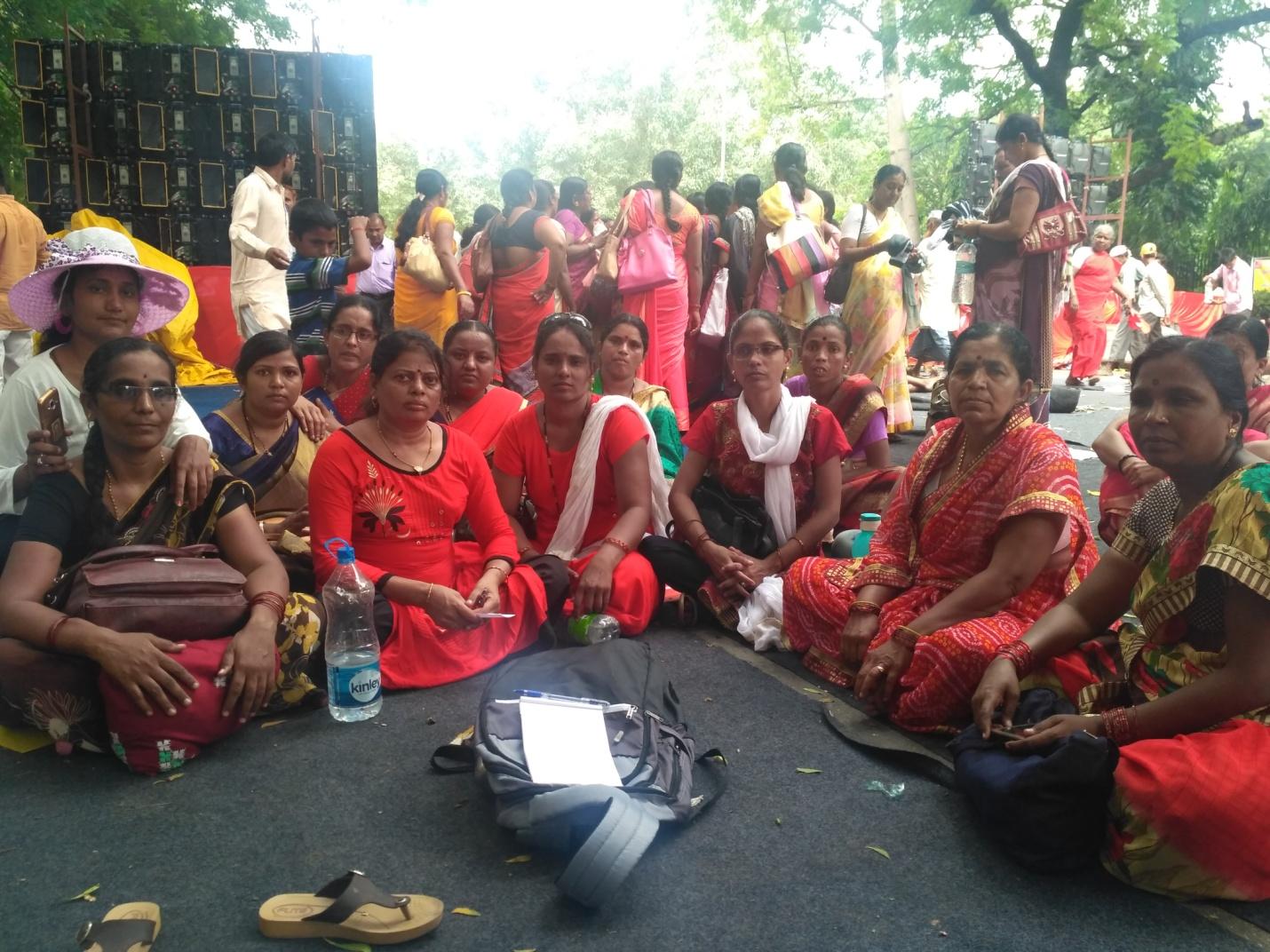 Then, in an age when the central government talks about responsive and good governance, we met a group of Accredited Social Health Activist or Asha workers from Rampura Katabagh in Karnal district who are tired of the “no response” attitude of bureaucrats in their local areas.

Harmanpreet says they have been waiting for their salaries since April. They were promised an increase in salary from Rs 1000 to Rs 4000 per month but haven’t yet got any official confirmation. Local authorities have been asking them to “come next week” for several months. There has been no official response from members of the panchayat, the Block Development Officer or district authorities and all these Asha workers’ queries are being subverted in the form of applications and letters with no replies to these letters. 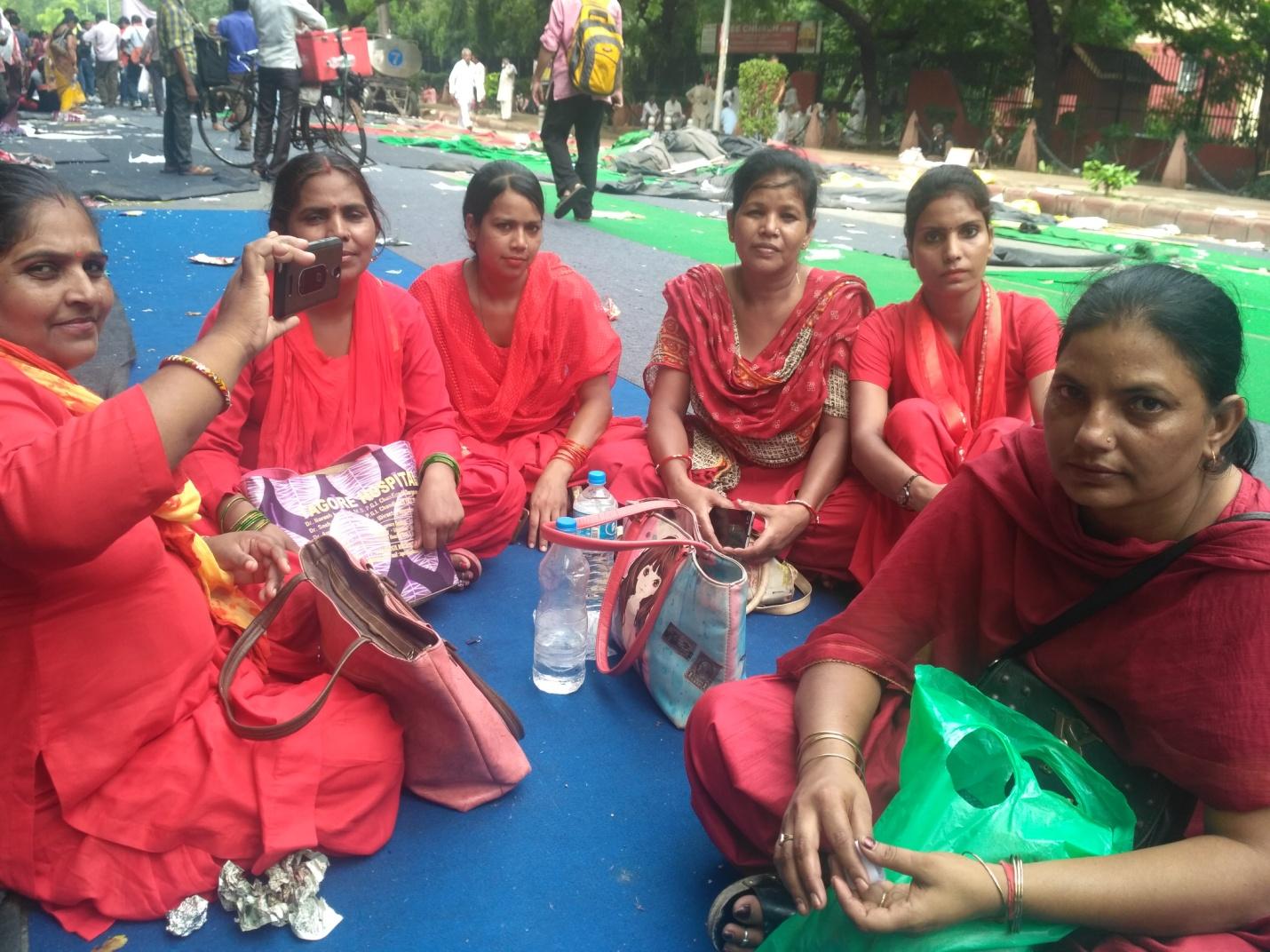 Bhulan Baudh belongs to a Dalit community. He is from Mariahu tehsil in Jaunpur district, just 70 kilometres from Varanasi, Prime Minister Narendra Modi’s constituency. He and his companions present a strong case that the local politics in their town has been captured by Savarnas (caste Hindus) and the secular space is being distorted.

They are subjected to communal and social violence from Hindu majoritarian groups. Their community in Mariahu lacks access to housing and clean drinking water facilities, and no jobs are being offered under MNREGA. Most members of their community are either landless or own less than 1 acre of land.

They were also very vocal about the corruption that’s been taking place when the season to sell crops arrives. According to Bhulan Baudh, the government provides subsidies and buys crops only from big farmers, all of whom are savarnas.

So they are compelled to sell to mediators or local brokers at much lower prices than the government’s minimum support price. Then, these brokers sell the same produce to the government at the statutory rates. With no buyers left they are systematically being taken out of the market structure, and forced to sell their produce to these local mediators. 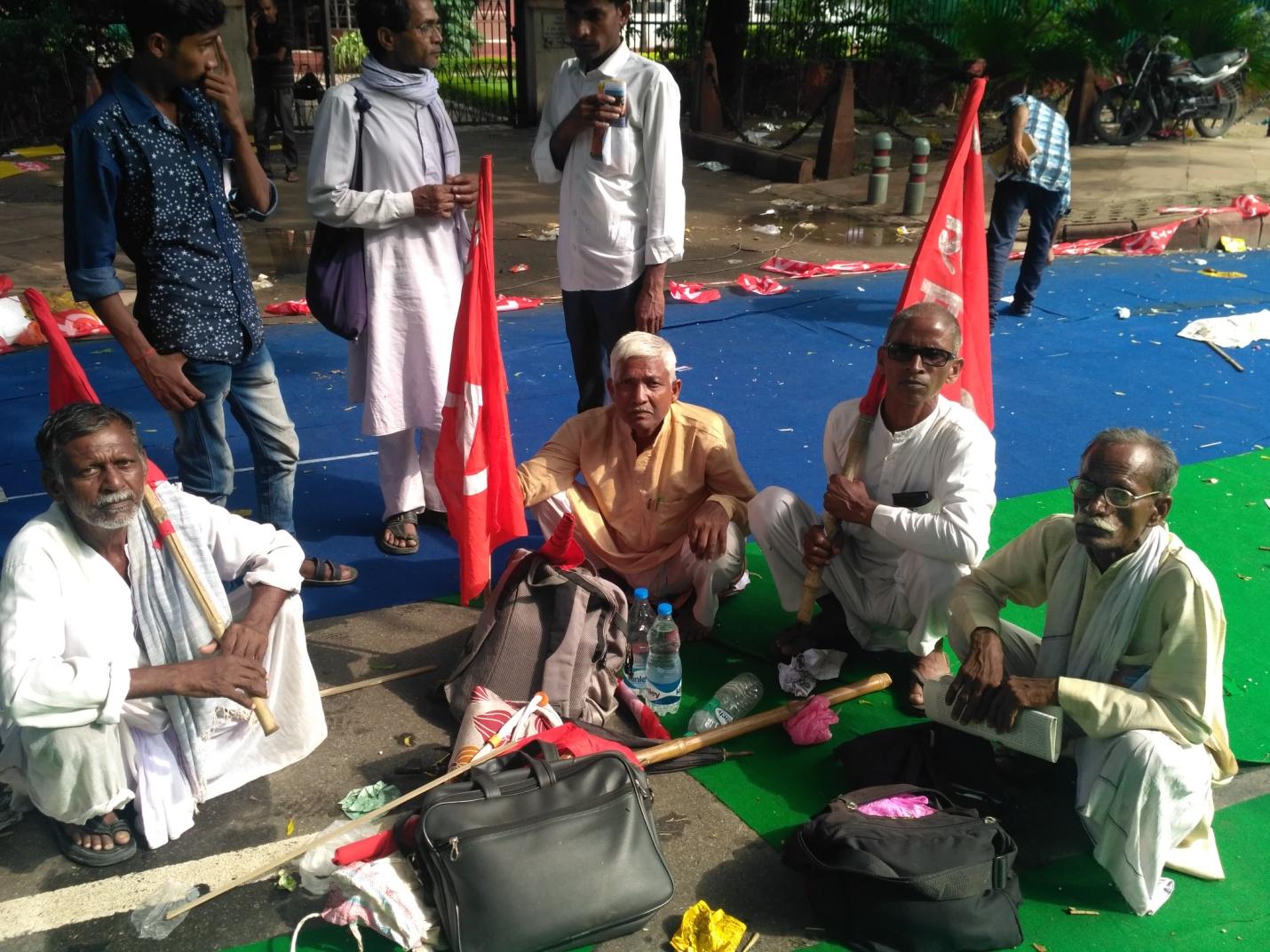 Anita Devi and Mohammed Harun from Birpur, and Saiful Khatun and Chano Devi from Fatki are from Bihar’s Madhubani district and came to Delhi with their peers to attend the rally. They are all landless labourers working on the fields of big farmers. They are not paid any wages for working on the fields. They get a minimal amount of produce in return for their labour which is not sufficient for a proper meal. They do not have access to ration cards or other forms of government identification.

According to Mohammed Harun, the pocket in their village where he lives is constantly subjected to violence by upper-caste Hindus. He says ‘rangdari’ (extortion) still exists in his village.

Every monsoon villages like Birpur, Fatki, and Pachbaniya are subjected to extreme floods due to high levels of water in the Kosi and Kamala rivers. Once the water level goes down there is no provision for removing the stagnant water, which covers pockets of these villages leading to diseases like diarrhoea and malaria.

According to Laxmi Devi, women belonging to Dalit and minority communities who didn’t want to be named presented instances of being defrauded, where local goons colluded with banks to take loans issued in their names and without their consent. Now these women are indebted to local banks owing amounts as large as Rs 60,000. 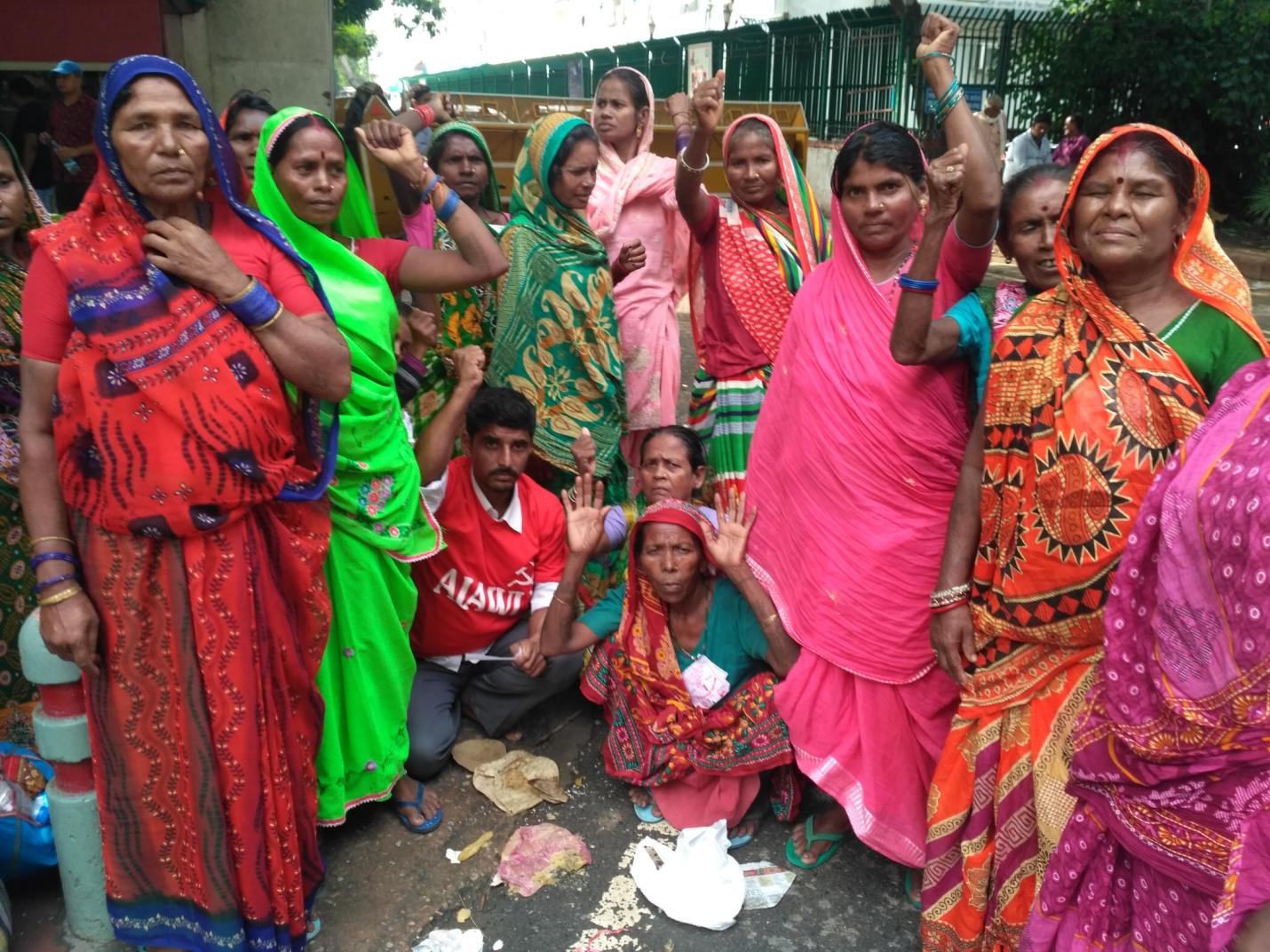 The Delhi rally builds on the March 6 rally in Maharashtra where nearly 10,000 farmers embarked on a long march from Nasik to the Maharashtra State Assembly in Mumbai. By the time they reached the financial capital on March 12 their numbers, by some estimates, were touching 40,000.

In the present-day Indian countryside a new stratum of capitalist landlords and petty bourgeoisie has fashioned itself out of the old landlords or sections of the ascendant rich peasantry, which came into being by exploiting the poor and socially vulnerable of our society. As these accounts show such exploitation is still prevalent.

The September 5 rally was largely a symbol of hope betrayed rather than hope realised.