Bhima Koregaon: A Protest and a Press Conference

NEW DELHI: People gathered at the Jantar Mantar even as petitioners including historian Romila Thapar and economist Prabhat Patnaik held a press conference on the 2:1 majority decision of the Supreme Court rejecting a petition for an independent probe into the Bhima Koregaon incident and the recent arrest of five activists---Gautam Navlakha, Sudha Bharadwaj, Arun Ferreira, Vernon Gonsalves and Varavara Rao.

“A democracy functions on freedom”, said Romila Thapar. Prabhat Patnaik said that the Supreme Court that had extended the house arrest of the activists by four weeks had given them time to organise the defense. And had thus, emphasised the importance of liberty. Asked whether the petitioners see this judgement as politically motivated Patnaik replied, “Every public pronouncement has a motive.” He further added, “State accuses people under draconian acts like Unlawful Activities Prevention Act (UAPA). Puts them in jail; incarcerates them for years and after years when people are not proven guilty, then who is to be blamed?”

At Jantar Mantar the speakers were less guarded and more critical. “The government has chosen Bhima-Koregaon as a tool to kill two birds with a single stone,” said the newly elected president of the Jawaharlal Nehru University Students Union N.Sai Balaji.

Pankaj Tyagi from People’s Union for Civil Rights, Haryana said, “None of those arrested seem to have any relations with Bhima-Koregaon but were instead working and struggling to help the oppressed people raise their voices,” he said criticising the SC verdict. 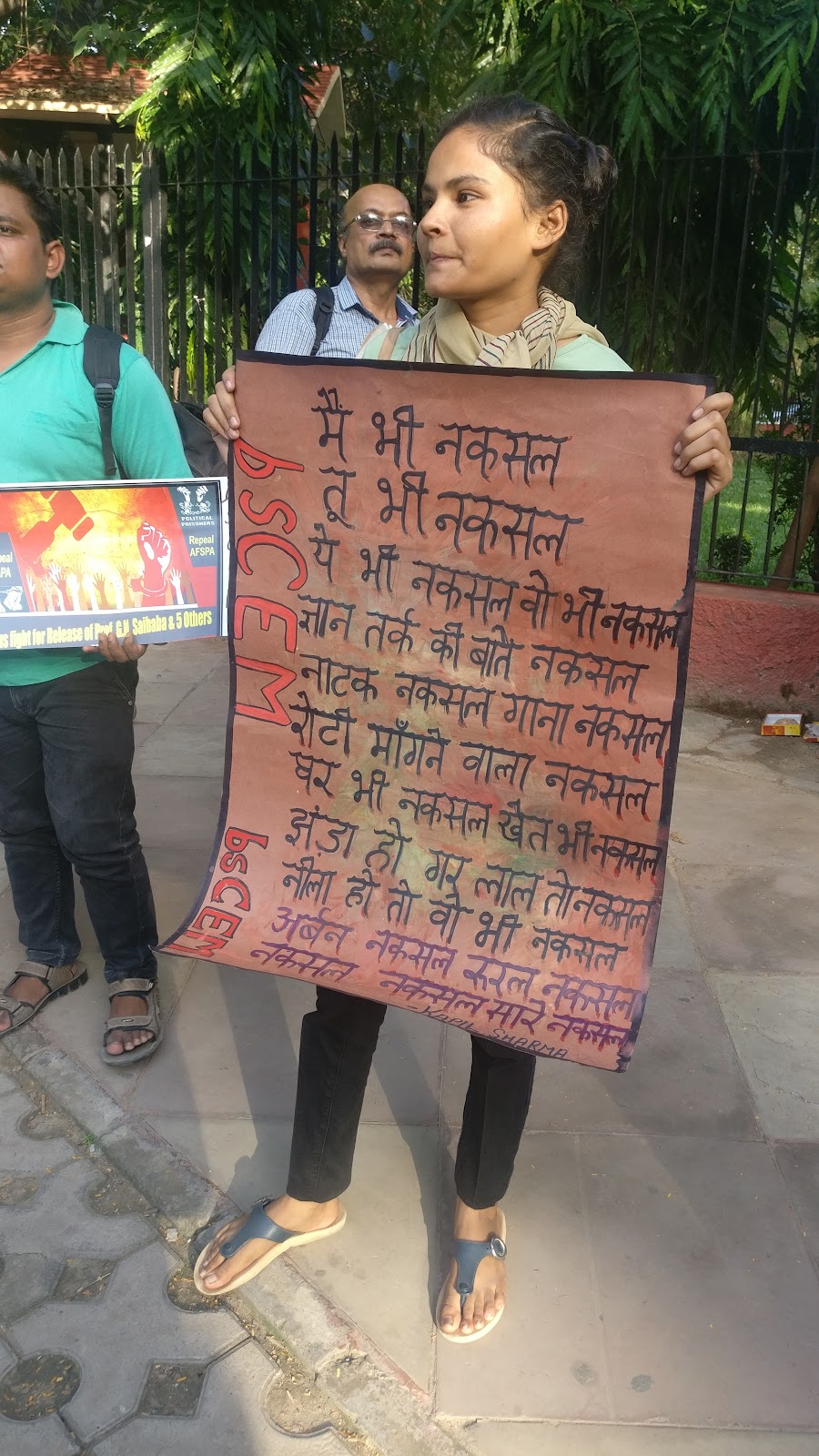 Labour activist Rakhi Sehgal said that the government is treating intellectuals ‘’like stepchildren’’. She added,“We expected the court to indict the Maharashtra police, but this was left to the minority judgement to do. Justice Chandrachud did this brilliantly. The need of the hour is now for people like us to show up on the streets and file specific kinds of cases in courts to hold the mischief-makers accountable. This is the only hope we have to save democracy”.

Filmmaker and writer Sanjay Kak pointed out that “the discussion around the right to dissent almost makes it out to be some kind of fashion statement as opposed to what it is today, which is that all the ten people arrested, including the five arrested previously, were working for the oppressed and in many cases in opposition of the government’s policies…they are indicted here unfairly for Maoist connections with Bhima-Koregaon”. Kak added, “the government has two points of attack for all dissenters – at first they used the angle of Islamic terrorists, but for that one prerequisite is for the dissenting person to be a Muslim. By using the term ‘Urban Naxal’ the government is able to brand everyone who opposes them as a Maoist.” 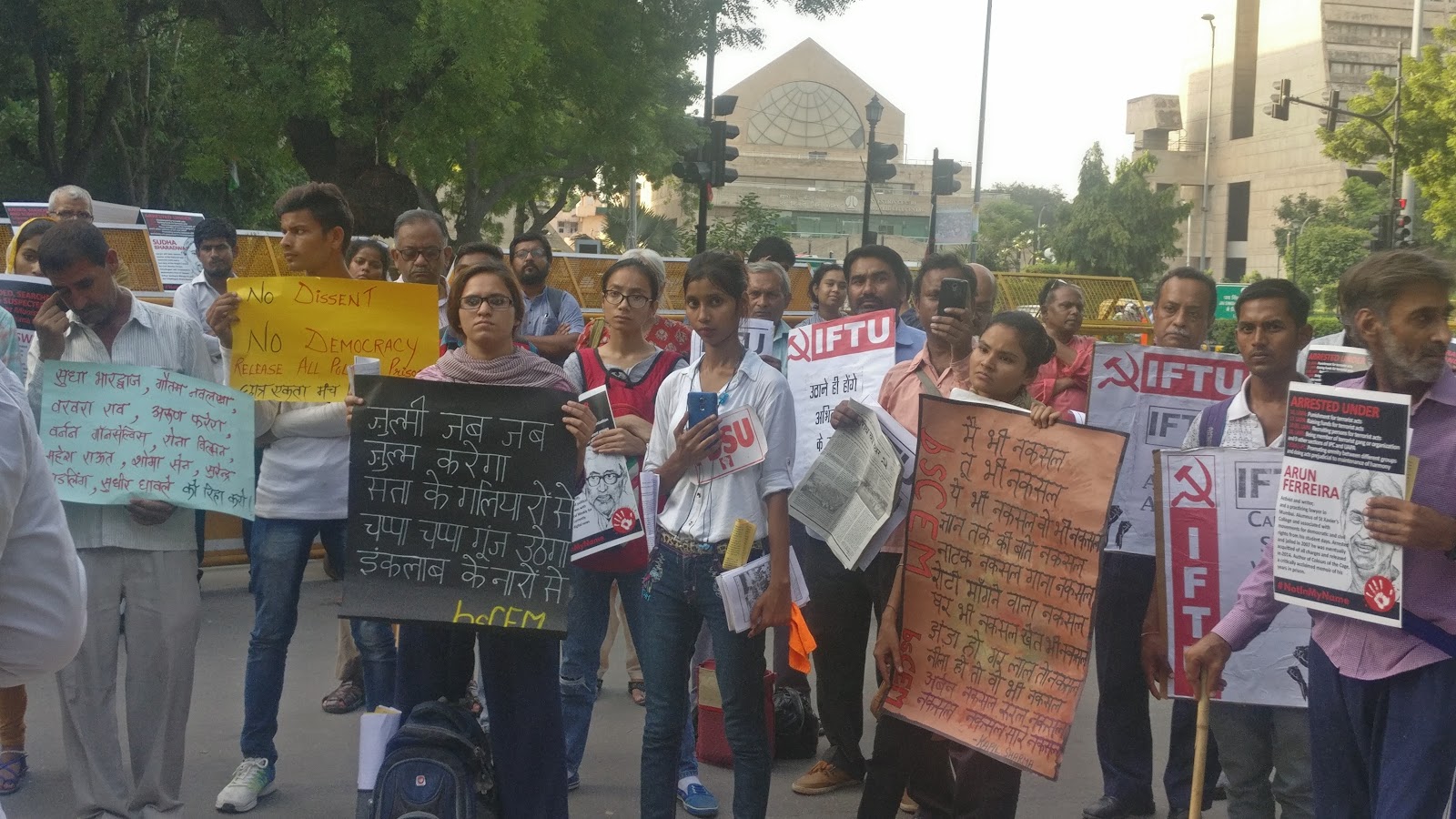 Gargi Chakravarty, Vice President of the National Federation of Indian Women said, “Intellectuals are being targeted vehemently today. There are two ways that are being used to throttle voices – concocting evidence and killing them off like Kalburgi and Gauri Lankesh. Neither of these can be ignored. This is also a crucial point in our country as we are merely 6 months away from the 2019 elections. A massive amount of pressure needs to be created by the political activists and civil society rallying round in secular progressive effort – be it from the left, the right or the centre – if we wish to save and retain our democratic values.”

Women Against Sexual Violence and State Repression, that helped organise the protest demanded the immediate and unconditional release of the arrested, the punishment of the real perpetrators of violence and Bhima-Koregaon, and the repeal of draconian laws such as the UAPA.

At the crowded press conference, Vrinda Grover, the lawyer on behalf of petitioners said, “We did not ask to choose the manner of arrest or whether we wanted different investigation. Our demand was, “Give us a better investigation as all of us have right to fair investigation.”’

All five activists will continue to remain under house arrest for four more weeks.

Justice Chandrachud, who had a dissenting view with the majority judgement, said this case requires a need for “court-monitored probe”.

He questioned Pune police’s press conference and said, process followed for carrying out investigation create an impression that the probe is unfair.

He added, “Deprivation of liberty cannot be compensated later.”

“Police’s selective disclosure casts a cloud on the fair probe,” he said, referring to the alleged letter of Sudha Bharadwaj that the police had produced to the media. 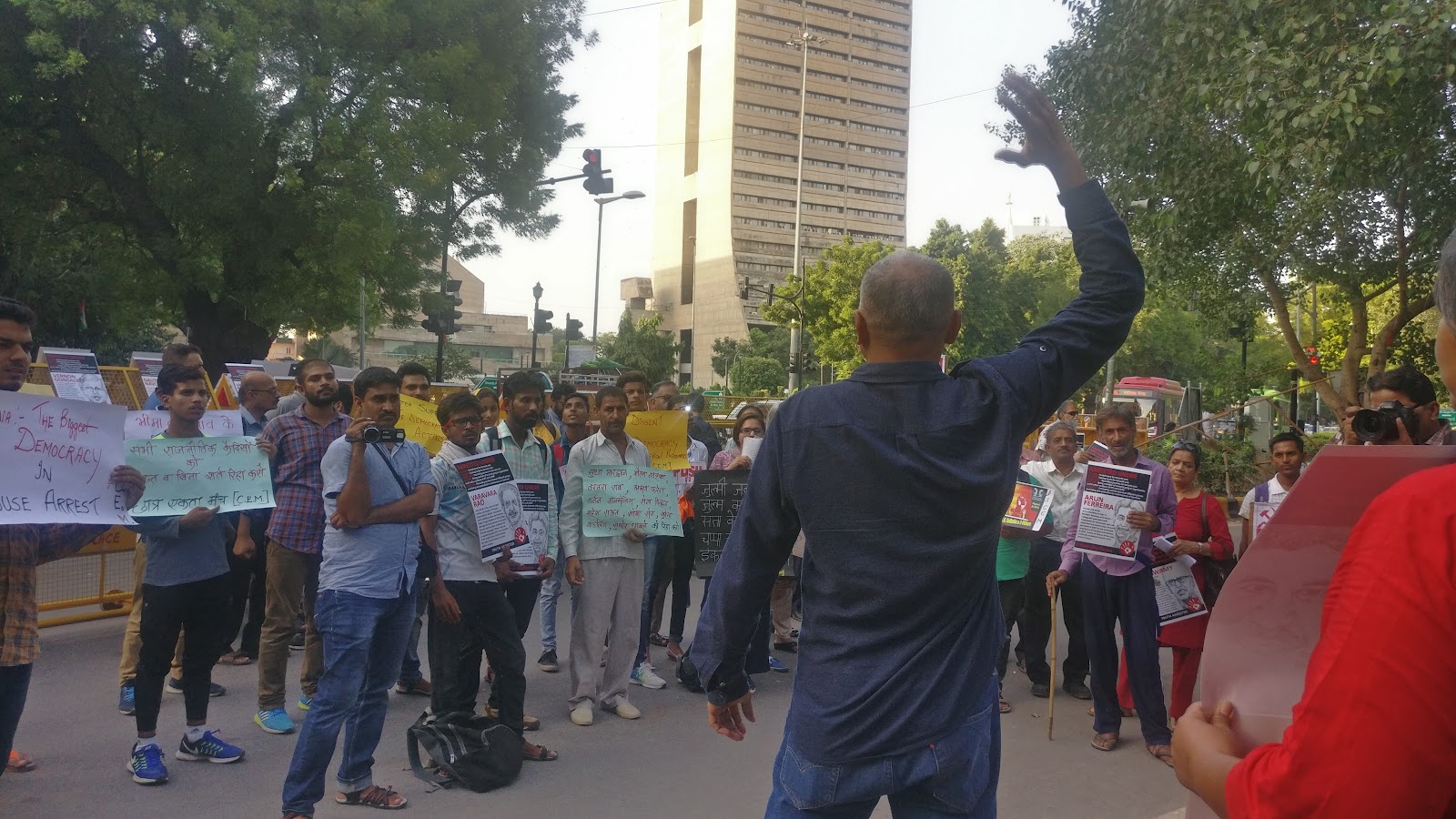