NEW DELHI: “We are terrified, we will not go to the courts now no matter what unless the police gives us protection, they can do whatever want to us, nothing is more valuable than life,” said Azmat Khan who was travelling with five others for the court proceedings in the Pehlu Khan case when they were attacked and fired upon.

For Azmat, this was the second encounter with death. The first being when he was beaten to a pulp by the cow mob that lynched Pehlu Khan on the Delhi Jaipur highway in broad daylight over a year ago. Azmat was grievously injured, and it took about six months of treatment at a Delhi hospital before he could return home. Even now he is not fully recovered, living a life of penury in deep fear.

The men identified in the FIR after the lynching are all out on bail. They were not locked up at all for the crime. Instead while going for the court case, Azmat, along with their lawyer, and Pehlu Khans two sons and relatives were chased, abused and fired upon by about 4-5 men in a car without a number plate on the same Delhi-Jaipur highway. And escaped only because they did not stop, and the driver had the presence of mind eventually to take the car across the highway to the opposite side and drive back towards Delhi.

As Azmat told The Citizen, they saw this car waiting after Neemran, near Maharaja hotel where there is a deserted spot, with woods. The men in the car first tried to stop them, but they did not, then gave chase in what seemed to be a scene out of a violent Bollywood film. Except that this was for real, with the car drawing up at one stage and the men using choice abuse to make the Khans stop their vehicle.

“We realised almost immediately that there was something wrong and speeded up, but the car was beside us, sometimes just behind, sometimes almost overtaking us. When they started firing at us the driver took the car across the highway, pointing back towards Delhi, and somehow we went through inner roads and reached the SP’s office in Alwar,” Azmat said.

A FIR was lodged, and the police promised protection. But the family, for valid reasons, is not sure whether this word will be kept. As Azmat Khan said, “ everyone is living in fear of our lives.”

On March 31 2017, Pehlu Khan, a 55 year old resident of Jaisinghpur village in the Nuh tehsil of Mewat, Haryana, had left for Jaipur to purchase dairy cattle. He was one of the 10 dairy farmers in his village, and this was just before Ramzaan. He along with six others were returning on April 1 when they were stopped by a 200 strong cow mob and attacked on the highway. Khan was beaten to death, the cattle seized, as was the money that the men had between them. Azmat Khan was destroyed as his cattle and his money was all taken and he came out of hospital six months later, penniless and an invalid.

The cow mob insisted they were transporting the cattle for slaughter and despite the sale documents were clearly not there to listen. Pehlu Khan’s sons saw their father killed before their eyes.

Till today there has been no justice for the bereaved and traumatised family. The women in the house told The Citizen earlier that they were terrified whenever their boys stepped out, and had barely stopped leaving their homes. Their worst fears came true this time with the open attack, with Azmat and others now clear that they will not even go for the court proceedings unless they are given adequate police protection. They escaped what was certain death by a whisker.

All those named are out on bail. And instead the family is facing charges, and appearing at regular intervals in court. Dairy farmers by profession they cannot purchase cattle now with life having been reduced to a daily struggle. 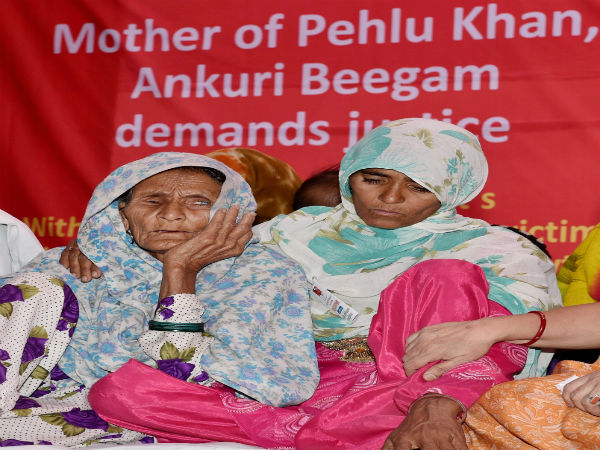