Goodbye Blood Capital: At the Farmers' Rally in Ramlila Maidan

NEW DELHI: The Kisan Mukti or Farmers’ Liberation march is underway in the national capital. Last night The Citizen visited the Ramleela Ground, where a cultural programme was organised for the farmers. Some impressions follow.

Give Me a Minute

‘You should focus on EVMs. But only by allusion. You don’t have a gun in your hand. But he’ll send someone with a gun and he’ll finish you off (aur woh tumhe thok dega).’ So says our taxi driver, referring to the prime minister.

When we arrived at Ramlila Maidan near Connaught Place and told him we were there for a farmers’ rally he said, ‘Oh, against Modi?’ He explains his argument about electronic voting machines. ‘Lalu showed them all how to do it [with booth capturing]. Then Shivraj Chouhan had EVMs made in Madhya Pradesh. Now they will do the same: no matter which button you press your vote will go to the lotus.’

We make to leave. ‘Give me a minute,’ he says. ‘Modi said the Congress looted the country for 60 years. What they could not do, I will do in 60 months. He announced his intention quite clearly, but none of us understood it at the time. Ram Mandir, Subhash Chandra Bose, Sardar Patel, this is all he has. It’s all a distraction. He doesn’t want anyone to talk about EVMs. In a fair election he won’t come back. But if he does, the poor and lower middle classes don’t stand a chance.’

Leela as in Representation

Gate No.1 is closed. The VVIP gate is for VVIPs. Walking we outpace an ambulance whose sirens call. Finally we enter and approach the stage, where four men in headdresses are dancing to supercharged Punjabi music. Many in the crowd tell us to Sit Down. Here it’s mostly men. The chairs and red carpets laid out at a distance from the low stage are full, and throngs of people flank it – farmers, organisers, volunteers, performers, mediamen practising concerned expressions for the camera.

A lone capped man dances, occasionally pulling another by the elbow towards himself.

The men on stage conclude their dance, and women artists from Punjab are to follow. The ring around the stage thickens – boys and men recording on phones of all ages. I join the ring. Behind us the crowd is mostly seated, and more will come, all told a few thousand are present here.

The artists from Punjab are done. The poet Sanjeev Kaushal will read next, but first a companion (sathi) has lost their key. Langar is underway behind the tent. We must please move further back from the stage. And the following persons are missing.

Sanjeev Kaushal begins. Now around the stage small groups of women in shawls or headscarves fill in some gaps. Standing as we are, we learn to ignore those telling us get out of the way. The poem compares farmers to ants diligent, carrying much heavier homes upon their so small heads.

But like all indifferent art it offers the chance to look around. And after the stage a tall marble pavilion, carved with snakes. In the corner a mosque. Arc halogen lights. Behind it the Vardhman City–2 Plaza.

The man who danced alone comes over. He saw me watching. He says don’t be offended (Bura mat mano). I ask and he says he’s from U.P. He asks and Delhi I reply. ‘So we’re brothers,’ putting an arm around me. ‘Yes.’

The Show Isn’t for Us, It’s for All of You

We return to the ring around the stage.

‘Bahaut ho chuki mann ki baat, ab kisanon ki baat suno,’ thunders the Culture Secretary of Swaraj Abhiyan (founded by Yogendra Yadav and Prashant Bhushan – the electoral front is Swaraj India). He has written all their songs. Now he will sing them. The music behind him starts and stops. ‘Kya ho raha hai?’ he turns and asks the darkness.

My colleagues return from their interviews. One asked a farmer why she was sitting way back and not watching the cultural programme. ‘It’s not for us, it’s for all of you. We make the programme dazzle (chamkila karte hain) so you will come, else no one talks to us. We’ve come here to tell people about our problems.’

Next an Adivasi group whose name I miss from Palghar district in Maharashtra perform a nritya, a round dance. The song too is near to a roundel – refrain, call, response. Most verses earn them applause.

In the next verse Ambani becomes Adani. Then,

Politicians’ grandsons (or Subhash Chandra Bose’s grandsons) go study in the USA – The rest of the people graze buffaloes!

An interlude. Jagir means a fief or land. Jaagna means to wake. Sarey is everyone.

From a new economic policy (or ethics) a new law is made!

Kinds and kinds of Cola! Pepsi, Coca, look here brother, all kinds of cola! – But brother, when we opened the taps we found the water was gone!

They are pitting Hindus against Muslims, some idiots, some fools – But if Ishwar and Allah are the same, then why these fights?

The tricolour is only their mask, brother!

The song ends with cries of Inquilab Zindabad or Long Live Revolution, with the audience joining in.

Still My Crops Are Lifeless

The last performance The Citizen attends is by Vinay, a singer songwriter from Gujarat who climbs the stage with just a dhaapla drum on his shoulder. Gently he begins, ‘All I want to say before I sing, is that farming is ten thousand years old. Those who have raised all kinds of crops these ten thousand years, are now on the streets and are saying, to those on the seat of power: Allow us to eat.’

My hunger has the right to know – Why crops are rotting in warehouses – And there’s no grain in my fist?

My fields have the right to know – Why great big dams are built – And still my crops are lifeless?

My rivers have the right to know – Why do factories mix in poison – As though rivers are unliving?

My votes have the right to know – Why all these big promises one day – And for five years, no work?

My Ram has the right to know – Why blood flows on the roads – Aren’t we all human beings?

The song is very moving, and Vinay has a beautiful voice. Each verse earns him more applause. For the last he asks us to join him, and many do:

Now why live without rights – It’s nothing like living!

The artist is applauded off the stage, with cries of Ladengey—Jitengey! (We will fight—We will win!) and Inquilab Zindabad.

It’s time to leave. This Kisanon ki Shaam, as the programme is called – A Night for Farmers, and also Twilight of Farmers – is to culminate in a performance by Rabbi Shergill, but we must file our stories and prepare for next day, when those assembled here will march on Parliament in strength.

The Delhi Police which is under central control has denied them ‘permission’ to rally at the Boat Club.

As we make our way through the cavernous tent many hundreds of small groups huddle on dusty plastic sheets and on chairs, talking, preparing their beds and blankets, preparing. There are student volunteers and farmers. They are housed by state and in the darkness the language changes step on step. It’s quieter here. Behind us in the scalding lights more cheerful music strikes up insistently.

As we near the gate, a car with bonnet flag approaches, a flag so big it’s limp. A door opens revealing a bearded man in fine kurta. With a starched scarf curled around his neck, Yogendra Yadav steps out with a smile.

On the metro ride back my colleague and I gossip about poststructuralists. Jean-Jacques Rousseau wonders what would happen if a giant finger nudged the Earth off its axis, one way or another. Everything changed with the Sun. The image reminds us that ‘the play of the world, is philosophically prior to play in the world’.

So what do we mean when we call it farmers’ liberation – liberation from which play?

The bills the organisers want Parliament to pass fit the observation that capitalism begets bureaucracy. They can do little to address the play of the world. To represent farmers as mumukshus (those yearning for moksha or an escape from the cycle of death and birth) is only cruel.

To seek to liberate them from play in the world – and fix them to what mast? – it's vanguardism, silly snobbery.

In this crisis or this time of decision, the organisers’ stated aims show hierarchy’s withering effects on the imagination, which is under concerted attack from a more immediately dangerous government and a parasitic state machine. These they can indeed obstruct: in part: for now: in the prevailing political economy.

They betray the limitations of competitive party politics. 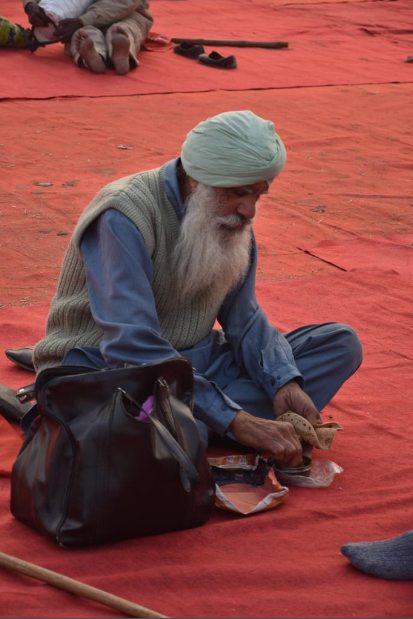