NEW DELHI: The dharam sabhas organised by the Vishwa Hindu Parishad with the Rashtriya Swayamsevak Sangh – from Ayodhya to Delhi – have expanded the agenda from ‘mandir wahin banega’ (the temple will be built at Ayodhya) to the assertion that mosques in many places will be torn down and replaced by temples.

An aggressive video that went viral after the show of strength in Delhi yesterday has belligerent youth demanding the demolition of the historic Jama Masjid in the capital. This is a first, as till now the demand for such action was restricted to Ayodhya and other cities in Uttar Pradesh, in particular Mathura and Varanasi. 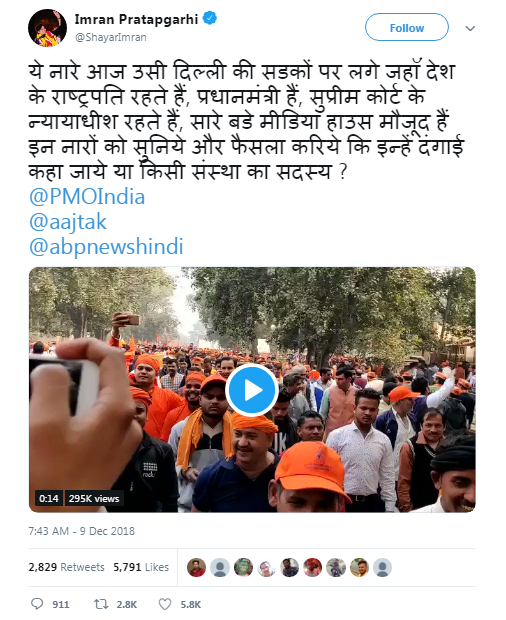 The realisation that the Ram temple issue might have outlived its vote utility for the 2019 elections has clearly seeped into the VHP/RSS vitals. The demand has thus moved on to embrace the demolition of other mosques and the subsequent construction of temples.

This feeds into the larger ‘Hindu Rashtra’ trajectory being pushed by the RSS, with evidence of its commitment to the same in the form of changes made in the infrastructure, such as changing the names of roads, of institutes, and now demolishing heritage in the name of religion.

The Opposition is aware that the temple(s) issue will occupy centre stage in the BJP agenda for the 2019 Lok Sabha elections if the Congress wins two or more states in the Assembly elections just concluded. Officially the BJP and the government – except for some local leaders’ voices – have eschewed the ‘build the temple’ discourse so far, with Prime Minister Narendra Modi still to respond.

Taunts thrown at the BJP by the Shiv Sena recently from Ayodhya have gone unanswered, although the state Assembly results tomorrow could change all that.

Opposition sources said that the government could then be expected to bring in a Bill on the temple issue in Parliament. Whether or not it is passed, it will be used by the BJP to pressure the Congress to take a stand on the temple question.

PM Modi could follow with a visit to Ayodhya. The Kumbh Mela which begins early next year with Uttar Pradesh Chief Minister Yogi Adityanath personally overseeing the preparations could then be the mass platform to take this further.

The Opposition, the sources confirmed, still does not have a strategy to counter this, but “we are aware and will be discussing it.” For now the response is, and will continue to be that “it is for the Supreme Court to decide.”

This would make it a question of the Constitution versus the absence of law, the sources added, pointing out that it would be for the BJP then to explain how and why it is acting outside the law.

However, the apprehension is that the temple issue will be built to feed into the perception of a mass movement, with RSS and BJP luminaries having already questioned the court’s intervention in what they call ‘matters of faith’.

The Congress party in particular is worried, following the Sabarimala temple crisis where its Kerala unit defied Congress vice president Rahul Gandhi’s position for the Constitution and the Supreme Court, and joined the BJP side of the fence. The Kerala Congress was equally vocal against the Left Front government in the state, and while muted publicly on its position against the court orders, made it apparent that it was at one with the BJP in keeping the temple out of bounds for women in the menstruating age group.

Of the Opposition parties the Congress is most susceptible on the temple issue. The BJP has targeted it especially in the north Indian states for being “anti-Hindu”, placing party managers somewhat on the defensive. The strategy to make Congress president Rahul Gandhi visit temples – as seen recently in Rajasthan and Madhya Pradesh – aims to cut into this perception, and establish that the Congress party is not anti-Hindu, but stands for all communities and castes.

A Congress win in two or more Assembly elections will thus be bittersweet, in that it will move the BJP and the government straight into a temple offensive, as the development card will clearly be seen to have run out of steam.

PM Modi who has been refraining from comment is likely to lead this charge, with the Opposition meeting today looking at a counter strategy to take it into and through the 2019 polls.

Communalism, all Opposition leaders spoken to agreed, will top the BJP agenda with full support from the RSS and its affiliates. The Shiv Sena which has been taking pot shots at the BJP on the issue is expected to quieten down as well, with a repeat of the 1992 communal frenzy preceding the demolition of the Babri Masjid expected on a larger dimension.