News You Can Choose: TV Channels Report their Own Results

Numbers are dressed up, and typically left unexplained

NEW DELHI: If you were watching television for today’s election results, you were probably playing a very confusing guessing game, as each channel had entirely different numbers for the results of the five assembly elections – Madhya Pradesh, Rajasthan, Chhattisgarh, Mizoram and Telangana.

Even as the Election Commission puts out official numbers, of leads and then confirmed wins (available right here), TV channels were determined to be one step ahead of official numbers – and each channel’s numbers differed widely. The viewer, as a result, was left wondering which channel had got it right… with TV coverage of the elections reducing itself to conjecture rather than news.

This writer took the following screenshots, as she struggled to make sense of the election results. 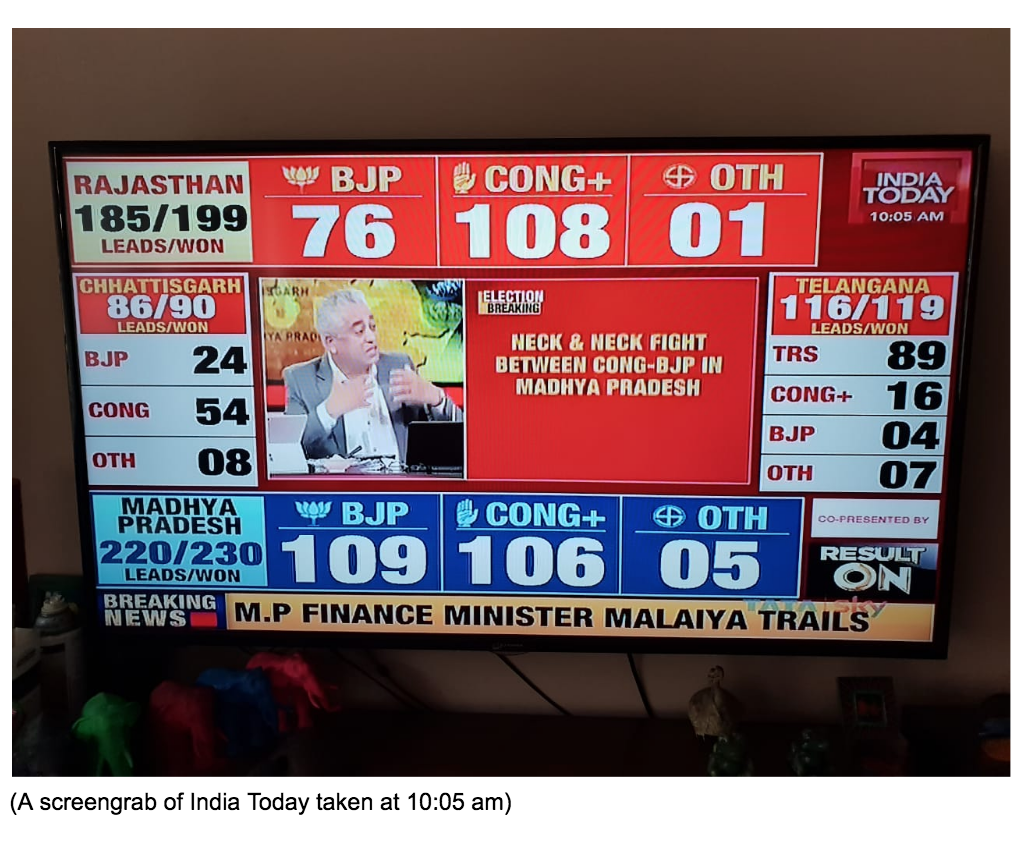 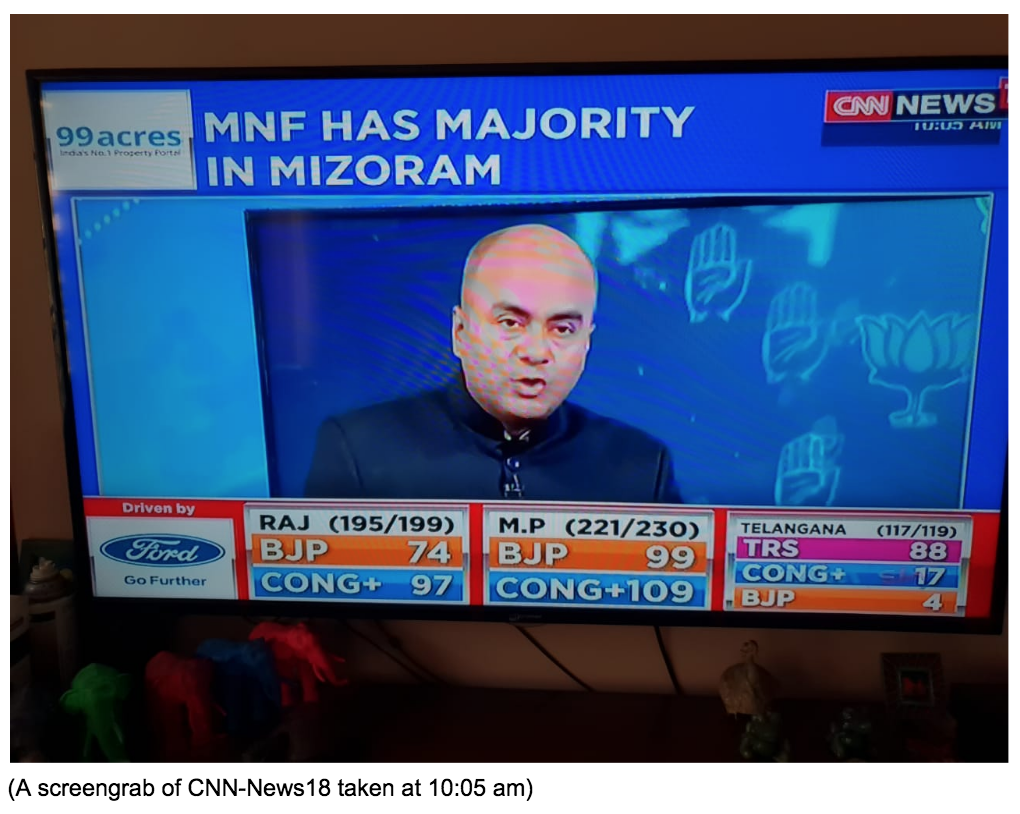 This writer had to remind herself that she was watching official election day results, based on official leads – or was she?

Take the situation half an hour earlier, at 9:30 am. The roles were reversed with CNN-News18 showing the BJP in the lead with 83 seats in Madhya Pradesh, and at about the exact same time, India Today showing Congress+ in the lead with 100 seats. 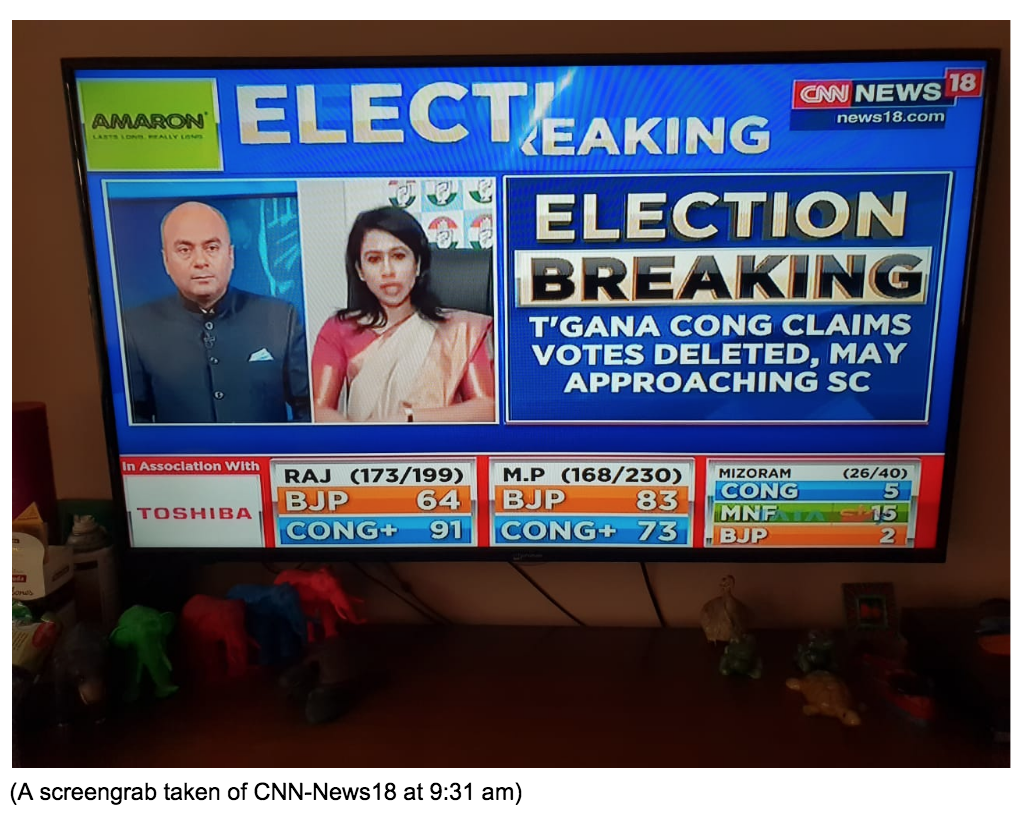 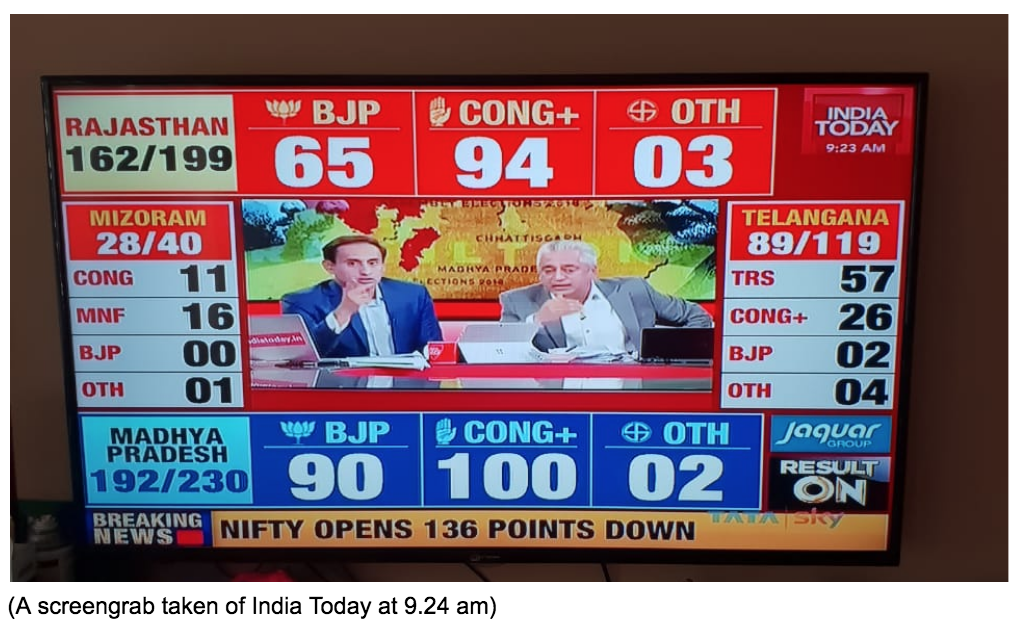 While the discrepancy was highest in Madhya Pradesh – at the time of writing the Congress has inched once more past the halfway mark – the numbers for the other states were equally confusing, with each channel giving us different results.

Granted, the numbers were all based on ‘leads’ as the results were not as yet officially declared, but this writer had to keep corroborating the numbers with the Election Commission of India’s website. The ECI is the only source for such leads on counting day. 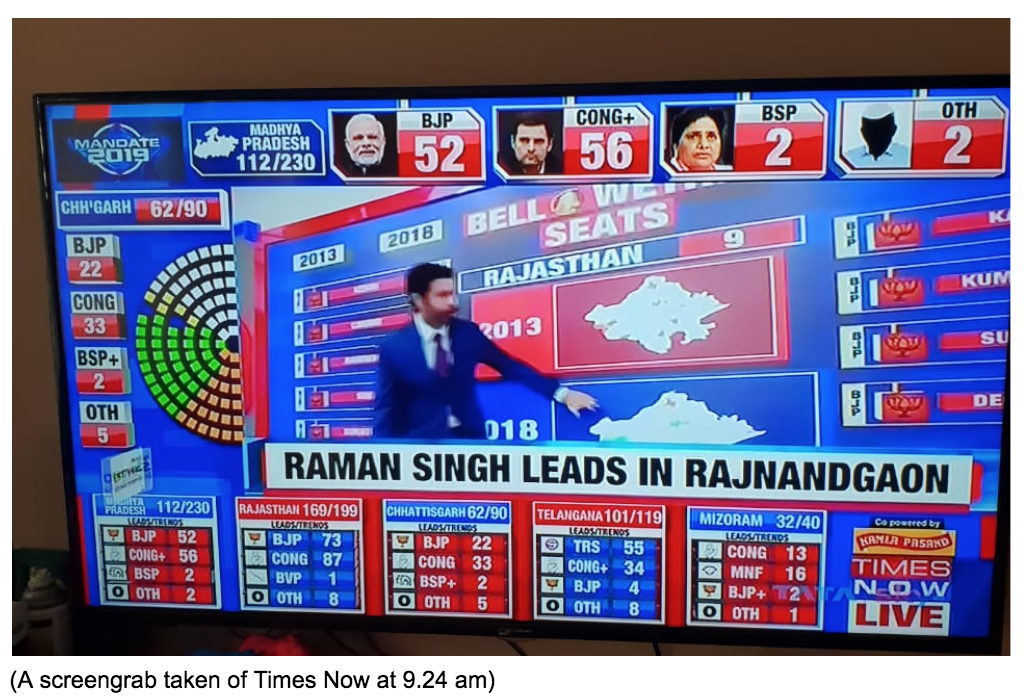 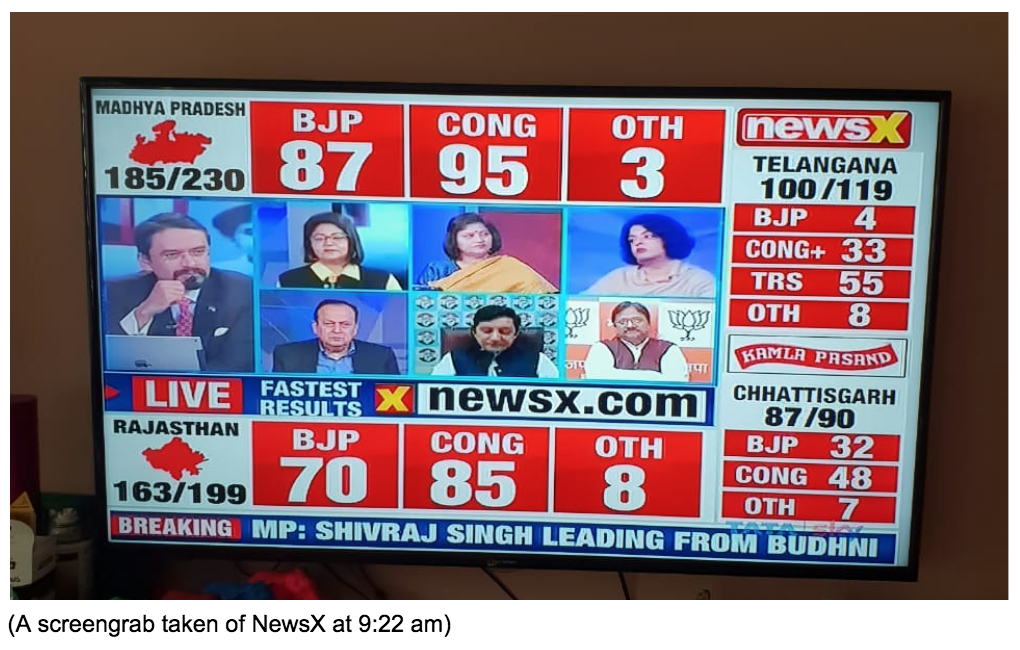 The analysis accompanying this seemingly arbitrary selection of numbers was equally confusing, as TV anchors and their guests spent a majority of their time on screen predicting the electoral outcome (as the numbers on screen rapidly switched between parties).

Very little of the analysis focused on what should have been key issues: what did governments do or fail to do, and towards what sort of government did voters vote? For instance, while a lot was said about the swing in the rural vote, there was little discussion of the factors that caused this supposed swing.

So why do TV channels do such a bad job of election coverage?

Senior journalist Sukumar Muralidharan is of the view that most TV journalists have little understanding of India’s political landscape, and this reflects in the analysis on results day. “The television journalists have little norm of complexities of all states and elections,” Muralidharan told The Citizen. “For example, the BJP except in Madhya Pradesh had an urban image. How far they could break this image has not been focused upon.

“Another example is the shift in caste and community voting preferences. For instance in Rajasthan, the influential Jat votes might have gone to the Congress this time,” said Muralidharan.

Senior journalist Shastri Ramachandaran makes a similar point, saying that “news channels are running the story, they don’t pause to consider a close reading.” Speaking to The Citizen, Ramachandaran said that the numbers flashed on screen are not put in context. “There is no clarity on rounds of counting to know the margin, which may indicate which party is leading,” Ramachandaran said, adding that “television journalism has failed the reporters as well. It has failed to give proper figures.”

Television has definitely failed the citizen, with election coverage sinking to a new low. The hysteria around exit polls, to which TV channels dedicate an entire day, is perhaps most indicative of the deterioration of the mainstream media.

Panels on channels form governments on the basis of these polls, where again, the numbers differ so widely that any analysis is entirely meaningless. A case in point was the exit poll analysis on Republic TV for these assembly elections, where two differing polls – one predicting a BJP win and the other predicting a Congress win – were pitted against one another.

Unfortunately, election result coverage has now sunk to the same level, with TV channels offering an analysis based on conjecture, not news.

With inputs from RAKSHANDA BHAT