The photos and visuals of the Prime Minister Narendra Modi sitting and paying homage to Savarkar in a cell in the Cellular Jail at Port Blair has been appropriately used to boost nationalistic fervor across the country.

Modi’s recent visit to the Islands has brought Cellular Jail and Savarkar back into focus. Cellular Jail had many variants of inmates. And, though the common cause for which they fought might be liberation of the country from the British. But the contemptuous reference to others continued inside the jail premise, which led to even betray those ideological opponents to the British and brand them terrorists. If Savarkar submitted clemency petitions to escape the prison life, another inmate Khushi Ram Mehta complained about laxity of discipline in Andaman citing the revolutionaries as terrorists following communism and socialism.

Vinayak Damodar Savarkar (Convict No. 32778) in his clemency petition to the Home Member of the Government of India on 14th November 1913, concludes with the statement:

“In the end, may I remind your honour to be so good as to go through the petition of clemency, that I had sent in 1911, and to sanction it for being forwarded to the Indian Government? The latest development of the Indian politics and the conciliating policy of the Government have thrown open the constitutional line once more. Now no man having the good of India and humanity at heart will blindly step on the thorny paths which in the excited and hopeless situation of India in 1906-1907 beguiled us from the path of peace and progress.”

“Therefore, if the Government in their manifold beneficence and mercy release me, I for not but be the staunchest advocate of constitutional progress and loyalty to the English Government which is the foremost condition of that progress. As long as we are in jails, there cannot be real happiness and joy in hundreds and thousands of homes of His Majesty’s loyal subjects in India, for blood is thicker than water; but if we be released the people will instinctively raise a shout of joy and gratitude to the Government, who knows how to forgive and correct, more than how to chastise and avenge.”

“Moreover, my conversion to the constitutional line would bring back all those misled young men in India and abroad who were once looking up to me as their guide. I am ready to serve the government in any capacity they like, for my conversion is conscientious so I hope my future conduct would be. By keeping me in jail, nothing can be got in comparison to what would be otherwise. The Mighty alone can afford to be merciful and therefore where else can the prodigal son return but to the parental doors of the Government?”

“Hoping your Honour will kindly take into notion these points.”

Savarkar was later released and he abstained from any revolutionary activity henceforth.

Another ‘nationalist’ inmate, Khushi Ram Mehta hailing from Hoshiyarpur, Lahore betrayed other inmates by reporting to the intelligence bureau.

In a confidential intelligence bureau report vide file no. 90/41-Jails dated 5th Dec 1941, based on extracts of statements of Khushi Ram Mehta addressed to the Chief Commissioner, he accuses some of the inmates, adherents of communism, who fought the British forces, as terrorists.

Khushi Ram Mehta, a revolutionary convicted in a Ooty Bank Robbery case of 1933 and also suspected to be implicated in two mail runner robberies perpetrated in Jullundhur District in 1941 scouts for the intelligence agency and makes a statement which says,

“The supervision in the jail was extremely defective and the convicts had been able to smuggle in a lot of communist and socialist literature. Dr. Narain Roy, nephew of Dr. Bidhan Chander Roy, Niranjan Sen and Lahore Group smuggled the largest volume of literature in the jail.”

He also states how this was accomplished. He refers to the freedom fighters as terrorists.

“In the Indian jails, the ‘terrorists’ had been associated freely with Civil Disobedience Movement prisoners several of whom were men of high learning and had been permitted all sorts of books for study in jail. On their release the prisoners made over their literature to the terrorists, who brought them to the Andamans unchecked by the so many authorities which formally checked them, on their way to the Andamans.”

“The prisoners requested some contacts living in Andamans outside the jail to get books direct from the continent and smuggle them through warders.”

“The prisoners requested their relatives in India to send them particular books. When they arrived in jail, they were checked by the authorities who finding them objectionable set them aside. There were, however, some terrorist prisoners who were working as ‘munshis’ in the jail office who picked those books and gave them to their comrades” 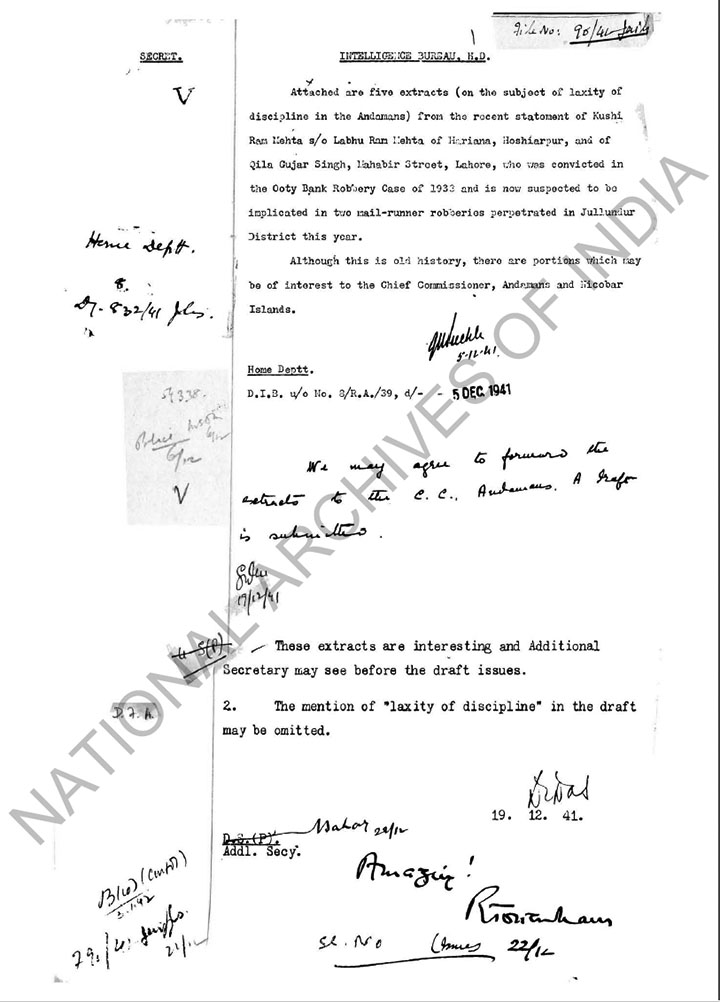 He reports to the intelligence that in connivance with the authorities, the prisoners could include their literature into the library.

“Finally, the control of the library passed into the hands of the terrorists. This was about the year 1935. The prisoners spent most of their time in reading communist or socialist literature with the result that there was hardly any left who had not been become a confirmed Communist or Socialist. Apart from the leaders of the groups held study circles, in which the principles of Socialism and Communism were explained.”

Explaining the daily routine in the jail, he states,

“At 5.30 am, the locks of our cells were opened and after performing our daily ablutions, we had some exercises till about 8.00 am, when we took our breakfast. Later, we did the nominal jail work which was allotted to us. From 10 am to 4 pm, we attended the study circles with an interval for meals by mid-day. From 4 pm to 6 pm, we attended the games. We dined at 7 pm. We moved about in the compound till about 9 pm when the cells were closed.”

“It was then decided that an organ of the party which was called the Communist Consolidation, should be started immediately.”

He further reported that the group comprising Dhanvantri, Vije Kumar Sinha, B K Dutt, Bankeshwar, Narain Roy, and Niranjan were appointed to the editorial board of a manuscript paper, named “The Call”, which they published from the jail.

“The “Call” was started as a monthly paper. Members of the Consolidation Committee contributed articles on different subjects dealing with Communism and Socialism. “The Call” was a manuscript paper. Only one copy was written and placed in the library. It had about 150 pages. These activities of the Communist Consolidation continued unhindered till about the middle of 1937.

Khushi Ram Mehta also reports about a Chittagong Group, which wanted to take the activities further.

“The Chittagong Group members therefore, started military parades, at first without the sanction of the authorities, but a little later with the full approval of the authorities. They also had their uniform prepared. They prepared their buttons and badges from the silver utensils they were given for use. Anand Singh was their leader instructor. They were able to put up a very impressive show. When they marched past, and performed several lying and attacking formations with their Bamboo sticks used instead of muskets, they appeared really magnificent. The Chittagong Group therefore attracted about 30 or 32 members of the unattached groups. Some members of the Communist Consolidation were so impressed with these military drills of the Chittagong group that they also sought permission from the Communist Consolidation leaders to join the daily parades of the Chittagong Group. This resulted in the number of the Chittagong paraders increasing to about 90.”

“Frequent public meetings were held in the jail which were addressed by different speakers on the burning topics of the day. The May Day, the October Day etc were celebrated in the jail with due solemnity.”

He also notes in his complaint that the wing where the political prisoners were lodged appeared to be a miniature Soviet school.

“The “Bande Matram” and “Bharat Mata ki Jai” and other national slogans were never used. Such was the state of affairs when Gurmukh Singh arrived. He was mightily pleased to see the work that had already been accomplished. He was placed in quarantine on his arrival. So much was the keenness of the prisoners to see the new comrade that the quarantine was not respected and somehow or other members, one after the other, even in his days of quarantine had protracted interviews with him.”

Gurmukh Singh’s idea was that they should first of all win over some warders of the jail and through them make contacts with persons living outside the jail in that Island. The latter were to establish contacts through soldiers, or employees on board the S. S. Maharaja which visited the Island about once in every ten days. He put his idea into practice immediately.

“The practice in Andamans is this that convicts transported from India to that Island are at first kept in the jail for a period of three months and then those of them who are considered less dangerous are sent out in the open to work independently if they have got private means and under Govt. supervision if they none.

“One Thakur Singh, a life convict from Amritsar who was working under government supervision was immediately got hold of by Gurmukh Singh and he agreed to work for the party. Thakur Singh was further successful in establishing contacts with two Sikh soldiers who were serving in that Island. It so happened that they were deputed on duty on board the S.S. Maharaja for escorting the prisoners back to India. Gurmukh Singh sent a letter through Thakur Singh and these soldiers to someone in Calcutta. These soldiers were however arrested in Calcutta.”

“Thakur Singh was also returned to Lahore Jail. The soldiers were not able to deliver the letter to the person for whom it was intended. The letter fell into the hands of the government. After this incident, the jail authorities made a general search of the cells of prisoners but the latter had come to know of it beforehand and therefore had buried all their books and other objectionable literature underground. The authorities also were not very keen in their search as they felt that if they recovered some objectionable literature they would not escape blame for inefficient control over the prisoners.”

When the jail inmates went on hunger strike ont July 1, 1937, Khushi Ram reported that Gurmukh Singh had incited them to go on strike against the authorities.

“After about six months of the arrival of Gurmukh Singh, 215 “terrorist” prisoners went on hunger strike. 80 other prisoners were to go on ‘work’, encouraging the hunger strikers and create noise and protest against the forcible feeding when it was resorted to. They were also to arrange to get information regarding Indian reactions to the hunger strike. It had already been arranged that the newspapers containing Indian reactions should be smuggled inside the jail through some warders and other contacts which had been established. It may be stated here that even after the arrest of the two soldiers mentioned earlier in this statement who had carried messages for Gurmukh Singh, the later had made adequate arrangements through warders and other contacts to receive and to dispatch information regularly from the Andamans.”

Cellular Jail has its share of stories of clemency petitions and betrayals, seeking favours from the British. And some of them were rewarded too. Savarakar was repatriated and released after he petitioned and Khushi Ram Mehta was repatriated in 1937 and released in 1938.