'We Lost a MiG 21 and the Pilot is Missing': The Horrific Price of War

Media conducts psychological warfare, as actual lives one by one are lost

A two-paragraph briefing with questions again not allowed. The wording was peculiar and sufficiently ambiguous not to convey any information:

“India had informed about Counter Terrorism (CT) action it took yesterday against a training camp of Jaish-e-Mohammed (JeM) in Pakistan based on credible evidence that JeM intended to launch more attacks. Against this Counter Terrorism Action, Pakistan has responded this morning by using its Air Force to target military installations on the Indian side. Due to our high state of readiness and alertness, Pakistan’s attempts were foiled successfully.”

The pilot was not identified, although his name has been all over the social media since morning: Squadron Leader Abhinandan Varthaman.

A heartrending video, if authentic, has been circulated by Pakistanis, allegedly of the pilot being interrogated by Pakistani forces. Clearly wounded he asks with immense dignity, “Can you tell me Sir whether I am with the Pakistani Army?” Chilling words, that bring out the evil of war more poignantly than anything else. A moment that stands out as it highlights the terrifying consequences of war.

An ace fighter pilot is now in the custody of the Pakistan government, after an Indian “strike” where according to the foreign media including the BBC, Reuters and others, there were no casualities as the supposed target was not hit. The Indian government says strikes were carried out on “the biggest training camp in Balakot” and Indian media has quoted sources saying hundreds were killed. Pakistan says there was no damage nor any casualties.

The MEA’s press briefing in the afternoon - where its spokesperson Raveesh Kumar sat beside a silent Air Vice Marshall R.G.K.Kapoor - took place after a day-long propaganda war between the governments of India and Pakistan, with a chest-thumping media on both sides gladly pitching in.

At a press conference this morning in Islamabad, Pakistan Armed Forces spokesperson Maj Gen Asif Ghafoor told the media in Islamabad that the Pakistan Air Force had crossed the Line of Control into “India-occupied Kashmir” and “engaged with six targets”.

He said this was in response to the “Indian aggression” yesterday, near Balikot in Pakistan-controlled Kashmir.

A tweet from Ghafoor after the press conference stated: “In response to PAF strikes this morning as released by MoFA, IAF crossed LOC. PAF shot down two Indian aircrafts inside Pakistani airspace. One of the aircraft fell inside AJ&K while other fell inside IOK. One Indian pilot arrested by troops on ground while two in the area.” 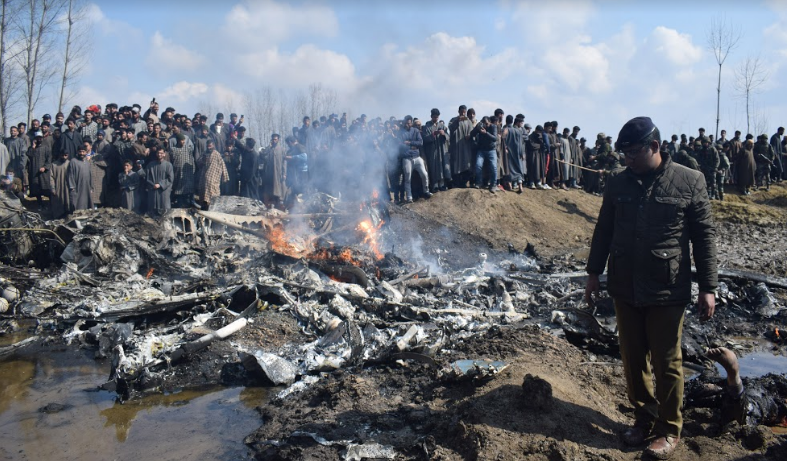 There was no official acknowledgment of any of this on the Indian side till the just-concluded press briefing by the Ministry of External Affairs.

“Pakistan Hits Back,” as the Pakistani news agency News International put it this morning. Pakistan spent the day in a blitz of propaganda with press conferences, statements, videos and tweets effectively blurring lines between facts and propaganda.

Initially through the blur there was clarity on only two issues. One that a Mig had indeed crashed in Budgam in Jammu and Kashmir, although this emerged through a series of rumours. And that the Pakistan Air Force had entered Indian space.

PTV Politics released a video claiming to be “exclusive footage of arrested Indian IAF pilot”. The video shows the person in question saying, “I am Wing Commander Abhinandan Varthaman, a MiG 21 pilot.”

The day was dominated by Pakistan’s publicity wing, just as Tuesday had seemed to belong to India. The internet was buzzing with tweets and photographs and videos of action by the PAF which seems to have returned home with the Indian pilot, if the video that has now gone viral is to be believed.

Adding to the chaos, of course, were several photographs and videos of IAF pilots that AltNews checked and found to be old pictures of pilots killed in crashes on Indian territory.

The Pakistan media - the News International agency - began the morning with headlines of counteraction by Islamabad, with the first line speaking of a “befitting response” by its Air Force. And from then on it was mayhem, with facts being mixed with fiction to create a propaganda blitz seeking to establish “strong and effective” action by the Pakistani military.

Meanwhile, the Indian news agency ANI reported that a PAF F-16 fighter-bomber violated Indian airspace and was shot down in retaliation 3 km inside Pakistan-controlled Kashmir, in the Lam Valley. A parachute was seen as the plane went down but the condition of the pilot was still unknown, according to the report.

Civilian airspace was “suspended” and airports north of Delhi closed by government order after Pakistan violated Indian airspace in the aftermath of the IAF’s airstrikes in Balikot yesterday.

ANI reported that airports in Leh, Jammu, Srinagar and Pathankot were placed on high alert. And that Pakistan had stopped flight operations from the Lahore, Multan, Faisalabad, Sialkot and Islamabad airports.

In India the order closing airports and “suspending” airspace has now been withdrawn.

Meanwhile, as The Citizen reported, in view of intense shelling and the threat of airstrikes the district magistrates of Rajouri and Poonch have ordered government and private schools within five kilometres of the Line of Control to remain closed today.

(Cover Photograph: Video grab of the heartrending video being circulated by Pakistanis, allegedly of the Indian Air Force pilot they claim is in their custody)