Ever wonder what other people are thinking? Us too. Thankfully, even as a handful of people with most all the guns and money encourage the upper classes to gaze ever inward, to call ourselves middle class for we cannot say caste, in deliberate social fragmentation and the targeted blinding of thought about what we share: the earth, and life or love and pain, immature capitalism the towering ecological disaster,

The Association for Democratic Reforms has released a report detailing the findings of a large survey on ‘governance issues and voting behaviour’ conducted between October and December last.

The ADR directly interviewed a representative sample of voters, 2.7 lakh adults across 534 Lok Sabha constituencies. Two-thirds of the respondents were men, two-thirds were between 18 and 40 years old, and two-thirds live in rural India. They were asked their name, gender, caste, religion, age and about the assets they own.

Besides ranking issues important ‘for your area’, respondents were also asked how their government has performed in each.

You can filter their responses by state, age or caste in these visualisations published in The Hindu. (Where in caste “general” means not ST, SC or OBC, describing the wealthiest third of Indians, and perhaps Muslims.) 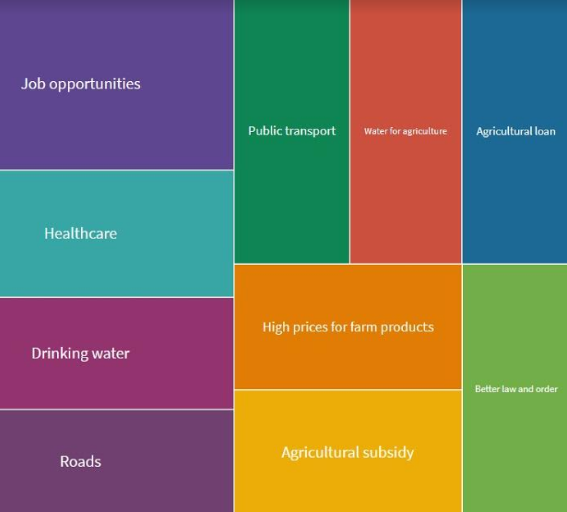 and quote some highlights from the full report below. 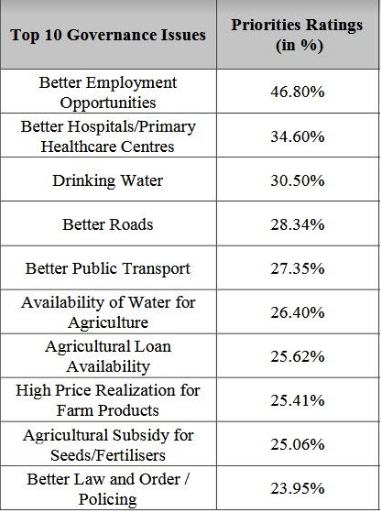 The worst performance of the government was on: Encroachment of public lands, lakes etc., Terrorism, Training for jobs, Strong defence/military, Eradication of corruption, Lower food prices for consumers, and Mining/quarrying.

The citing of better employment opportunities as respondents’ highest priority increased by 57% in a single year, from 30% in the 2017 survey to 47% in late 2018. The perceived performance of the government on this issue declined from 3.17 to 2.15 on a scale of 5.

For better hospitals/Primary Health Centres the corresponding numbers are nearly the same.

A party’s chief ministerial candidate was the most important consideration for most respondents in electing a legislator. Second, the party itself. Third, the area's candidate themself. (It is not clear why the survey asked about CM and not PM candidates.)

39% of respondents reported facing problems without an Aadhaar card.