NEW DELHI: Lok Sabha Speaker Sumitra Mahajan has followed her mentor BJP veteran L.K. Advani and announced her decision not to contest the Lok Sabha polls today. A MP from Indore since 1989, uninterrupted, Mahajan’s claim to the seat was ignored by Prime Minister Narendra Modi and BJP President Amit Shah leading her to write an open letter saying she would not be contesting.

The letter in Hindi states that “till today (April 5) the Bharatiya Janata Party has not declared its candidate in Indore. Why this indecision? It might be that the party is finding it difficult to take a decision. Even though I had spoken to the party seniors on this a long while ago and had left the decision to them. It seems that there is no clarity in their minds. This is why I declare that I will not contest the Lok Sabha elections. The BJP can decide now with a free mind, without any hesitation”. 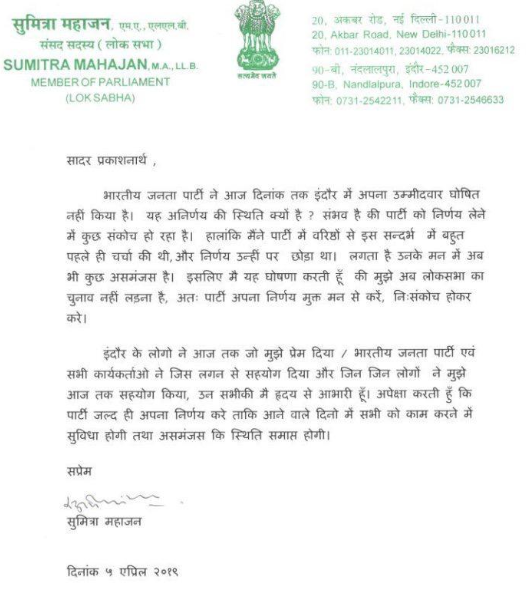 The delay was read as humiliation by Mahajan, according to sources, coming on the heels of the denial of Lok Sabha seats to party veterans like LK Advani and Murli Manohar Joshi. Mahajan, considered to be close to Advani and part of the old guard, read the writing on the wall after Shah decided to contest these elections from Advani’s Gandhinagar Lok Sabha constituency without informing him. The Speaker has also not heard from the BJP top brass, with the silence prompting her exit.

Like Advani in his blog, she also expressed her gratitude to her voters. And wished her party workers well for their love and support.

The silence from Modi and Shah, and their refusal to even acknowledge the contribution of leaders like Advani has led the former deputy prime minister credited with the rise of the BJP from two seats to power to write a blog recalling: “Serving the Motherland has been my passion and my mission ever since I joined the Rashtriya Swayamsevak Sangh (RSS) at the age of 14. My political life has been inseparably associated with my Party for nearly seven decades – first with the Bharatiya Jana Sangh, and later with the Bharatiya Janata Party and I have been a founding member of both. It has been my rare privilege to work closely with stalwarts like Pandit Deendayal Upadhyaya, Shri Atal Bihari Vajpayee and many other great, inspiring and self-less leaders.

The guiding principle of my life has been ‘Nation First, Party Next, Self Last.’And in all situations, I have tried to adhere to this principle and will continue to do so”.

Defense of democracy and democratic traditions, both within the Party and in the larger national setting,has been the proud hallmark of the BJP. Therefore BJP has always been in the forefront of demanding protection of independence, integrity, fairness and robustness of all our democratic institutions, including the media. Electoral reforms, with special focus on transparency in political and electoral funding, which is so essential for a corruption-free polity, has been another priority for our Party.

In short, the triad of Satya (truth), Rashtra Nishtha (dedication to the Nation) and Loktantra(democracy, both within and outside the Party) guided the struggle-filled evolution of my Party.The sum total of all these values constitutes Sanskritik Rashtravad (Cultural Nationalism) and Su-Raj (good governance), to which my Party has always remained wedded. The heroic struggle against the Emergency rule was precisely to uphold the above values.

It is my sincere desire that all of us should collectively strive to strengthen the democratic edifice of India. True, elections are a festival of democracy. But they are also an occasion for honest introspection by all the stakeholders in Indian democracy – political parties, mass media, authorities conducting the election process and, above all, the electorate”.

This at a time when the current BJP leadership does not hesitate to brand dissent as anti-national with those of a different point of view being told to go to Pakistan as they were traitors and terrorists.

Significantly Advani’s brood has been effectively sidelined in these elections. The list includes Lalji Tandon, Kalraj Mishra, Sushma Swaraj who made it very clear she would not be contesting, Uma Bharati also declared the same, Vinay Katiyar, Ram Naik and others. Modi and Shah are looking to come in with their own set of loyalists, free of the influence of the old guard that had just been about accommodated in this last term in office.