"If Gandhi gave a moral purpose and mass dimension to the freedom struggle Nehru gave a economic and socialist dimension and Ambedkar gave a challenging social and democratic dimension" wrote late President K.R.Narayanan in the 1980s.

Later in 2004 when the new building of the Kerala Assembly was constructed three huge statues of Gandhi, Nehru and Ambedkar occupied prominent place and were unveiled by then Prime Minister Manmohan Singh, quoting from Narayanan’s article.

Ambedkar’s relevance is even more today, his birth anniversary Ambedkar Jayanti. His formulation of anti nationalism is very significant today given the frequency with which the current dispensation dubs all dissent as anti-national.

The present regime which falsely claims that it has showered more honours on Ambedkar than any other government in the past, has never invoked the idea of nationalism expounded by him. When late Speaker Rabi Ray took a decision based on the proposal of the General Purposes Committee of Lok Sabha to install portraits of Dr. Ambedkar, Rammanohar Lohia and Shyama Prasad Mukherjee in the Central Hall of Parliament in 1990 it was L K Advani who went to the then President of India R Venkatraman and requested him to unveil the portrait of Mukherjee only.

Later when Rabi Ray as Speaker of Lok Sabha invited President Venkatraman to do the honors he told him that as per Advani’s request he would unveil Mukherjee’s portrait and would not like to monopolize the opportunity to unveil all three portraits. He then told Ray that let some one else should unveil the other two portraits. Eventually portraits of Ambedkar and Lohia were unveiled by Prime Minister V P Singh.

In the context of nationalism Ambedkar’s reflections are of profound significance. In his writings he very prophetically said that whenever struggling humanity demanded measures for fulfillment of basic rights the governing class considered it as a threat to nationalism. He also cautioned that there could be challenges to the nationhood of India from extra electoral forces. The extra electoral forces he talked about are now seen every where and the biggest manifestation of it is in Sangh Parivar challenging the very idea of India.

Dr. B.R. Ambedkar, the principal architect of our Constitution, in his numerous writings reflected on nationalism and gave valuable insights which are worthy of study and research in the present context where nationalism is being invoked in a coercive manner, spreading fear and anxiety among people.

It is educative to learn that he while giving evidence before the South Borough Committee in 1919 Ambedkar had prophetically said that when education is monopolized by a few (because of four fold varna system upholding hierarchy of castes) it produces a nationalism which instead of producing sympathisers of the poor and deprived, produces champions of the status quo. Who become the oppressors of the marginalised.

This logic of Dr. Ambedkar articulated a hundred years ago is applicable to 21st Century India where good education is restricted to the higher castes and people of wealth. It is a visible monopology of education by the better off sections of society. With this monopolization of education there is the worrying trend of nationalism which is exclusive, arrogant and muscular.

Therefore, Ambedkar's prophetic analysis a century ago assumes critical significance for our time marked by emergence of protagonists of nationalism who are oppressive, jingoistic bigots.

Ambedkar described the idea of Hindu Rashtra as arrant nonsense and predicted that it would cause calamity.

The ideals of Hindu Rashtra often conveyed through binary vision of ruling leadership in terms of Smasan- Kabristan and Diwali -Id has done enough damage and its brutal example is the rape and murder of Asifa in Jammu and the horrendous display of the tri colour and shouting of Bharat Mata Ki Jai by those who defended the rape and murder of the little girl in the name of Hinduism and nationalism.

The calamity is impacting the Republic of India in a devastating manner.

Annihilation of caste is the goal. The idea of Hindu rashtra which is celebrated in the geo strategic space of its proponents is a negation of it. The opposition to it must be based on Ambedkar's slogan "Educate, Organise and Agitate". It constitutes a great slogan and Professor Amartya Sen interpreted this as a slogan for deepening of public reasoning.

At a time when din and cacophony based on fake news, lies and half truths is devastating reasoning, dialogue and debate we need to invoke that slogan of Ambedkar. In giving primacy to education and harmoniously blending it with Organisation and Agitation Ambedkar showed the way for social transformation through the constitutional method.

He had cautioned that in the absence of the constitutional method there would be "grammar of anarchy".

It was a powerful indictment of an inegalitarian social order informed by political equality and entrenched social inequality.

The challenge is to bridge the gap between political equality and socio economic inequality for establishing a society based on ideals of liberty, equality and fraternity. The genius of Ambedkar was well reflected in his ability to reconcile and accommodate. Even while bitterly criticising Hinduism he embraced Buddhism which he said is closer to Hinduism.

He rejected Hindu scriptures and burnt Manusmriti. But he took many positive aspects contained in those scriptures. While defending the Hindu Code Bill he quoted some of the Hindu scriptures to defend the rights of women to own property and promote the cause of monogamy.

This reconciliatory approach was best reflected by him when he said that the religion of India should not be based on scriptures but on liberty, equality and fraternity and such a religion should derive inspiration from Upanishadas.

Yet another remarkable example of reconciliation was reflected in his work on “Buddha and Marx” in which he brought those two thinkers and liberators together without accepting class struggle of Marx and positively affirming Buddha’s approach of social change based on Pragyan (enlightenment), Karuna (compassion) and Samata (equality).

Let his reconciling vision triumph in the troubled times India is passing through. Humble Tribute to Ambedkar on his birth anniversary. 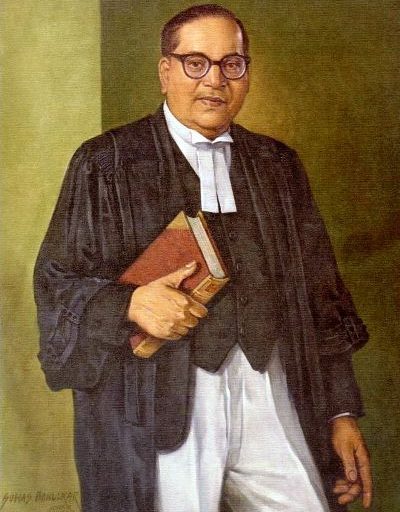 S.N.served as Officer on Special Duty and Press Secretary to President of India late K R Narayanan and had a tenure as Director in Prime Minister’s Office and Joint Secretary, Rajya Sabha Secretariat.