Do Not Marginalize Us in Delhi, Muslim Leaders to Congress Chief Rahul Gandhi

The four leaders have said that they have started feeling the heat of alienation within the Congress, and the denial of seats to minority candidates goes against the ideological strand of the party.

The letter has been signed by Asif Mohammad Khan, Shoaib Iqbal, Matin Ahmed, Hasan Ahmed. All these leaders have been former MLA’s from the Congress party representing different constituencies of Delhi.

Speaking to The Citizen, Asif Mohammad Khan, and former MLA of Okhla Assembly in Delhi said that this declining representation of Muslims as candidates in elections is a threat to democracy and the basic idea of social justice.

“We have indeed written to the Congress Chief, Rahul Gandhi demanding at least one Lok Sabha seat be given to a Muslim candidate from Delhi. So far we haven’t heard of even one Muslim candidate and have written in the hope that Rahul Handhi will make sure that justice is done within the Congress party,” Khan said.

Khan also pointed that giving a Muslim candidate a chance to fight from an area largely dominated by Muslims will make sure that the vote is not divided between AAP and Congress since AAP has not named a single Muslim name.

“The Congress party should think of fielding a Muslim candidate from an area where Muslims form a large chunk of population. This will also be strategically good for the party as it will repose the faith of the electorate in the party when no other party in Delhi has fielded a Muslim candidate,” he said.

Responding to a question on increasing polarisation because of which it has become difficult for Muslim candidates to win a seat, Khan replied, “If you look at the result from 2014 assembly elections in Delhi, you will find that out of total of eight candidates who won on Congress tickets, five were Muslims, the polarization then was more than what it is now. So to say that Muslims don’t win is a lame political excuse to deny adequate representation to Muslims.”

The letter sent to Rahul Gandhi by these leaders states, “Keeping in mind the large number of Muslim voters and contribution of five senior Congress leaders in Delhi, a ticket must be given to one Muslim candidate from Chandni Chowk constituency or from North East Delhi parliamentary constituency.”

It is imperative to mention that the Congress so far has not declared its list of candidates from Delhi amid speculation of an alliance with Aam Aadmi Party.

One of the signatories told The Citizen that former Chief Minister of Delhi Sheila Dixit had assured them that one of the Congress’s candidates from Delhi will be a Muslim. 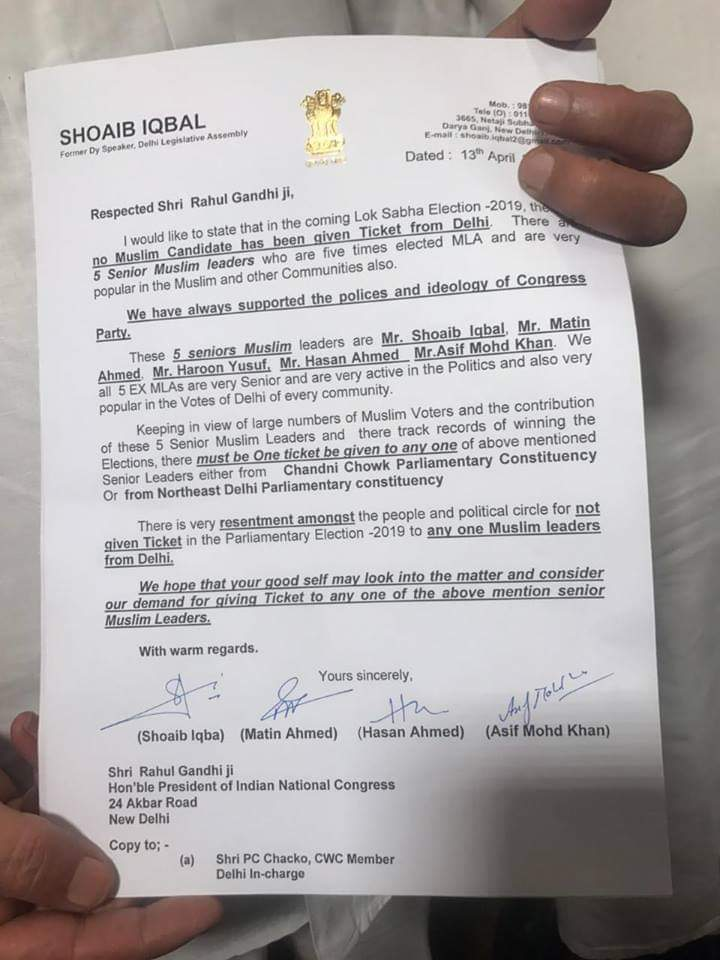