On The Campaign Trail: The Hathi In The Room In Amroha

'In Amroha, the fight is between the BJP and the gathbandhan.' #TCVotes

AMROHA: It’s about 930 in the morning and we have stopped for a quick cup of coffee at a Burger King outlet in Gajraula, on the Bijnor - Moradabad Road in Western Uttar Pradesh. This area falls within the Amroha Lok Sabha constituency, where the BJP’s Kanwar Singh Tanwar is the sitting MP.

Just as we’re about to leave, two men walk in, one of whom is wearing a saffron scarf bearing the lotus symbol. Mehar Chand Tanwar is the sitting MP Kanwar Singh Tanwar’s brother. “There’s a lot of polarisation in this area,” Mehar Chand tells us. “Too many atrocities against Hindus.”

“This applies equally to Hindus and Muslims,” he responds to a question on the religious character of his demands. “Beta (son) and beti (daughter) are equal; this law should be applicable to the third child irrespective of the gender of the first two.” 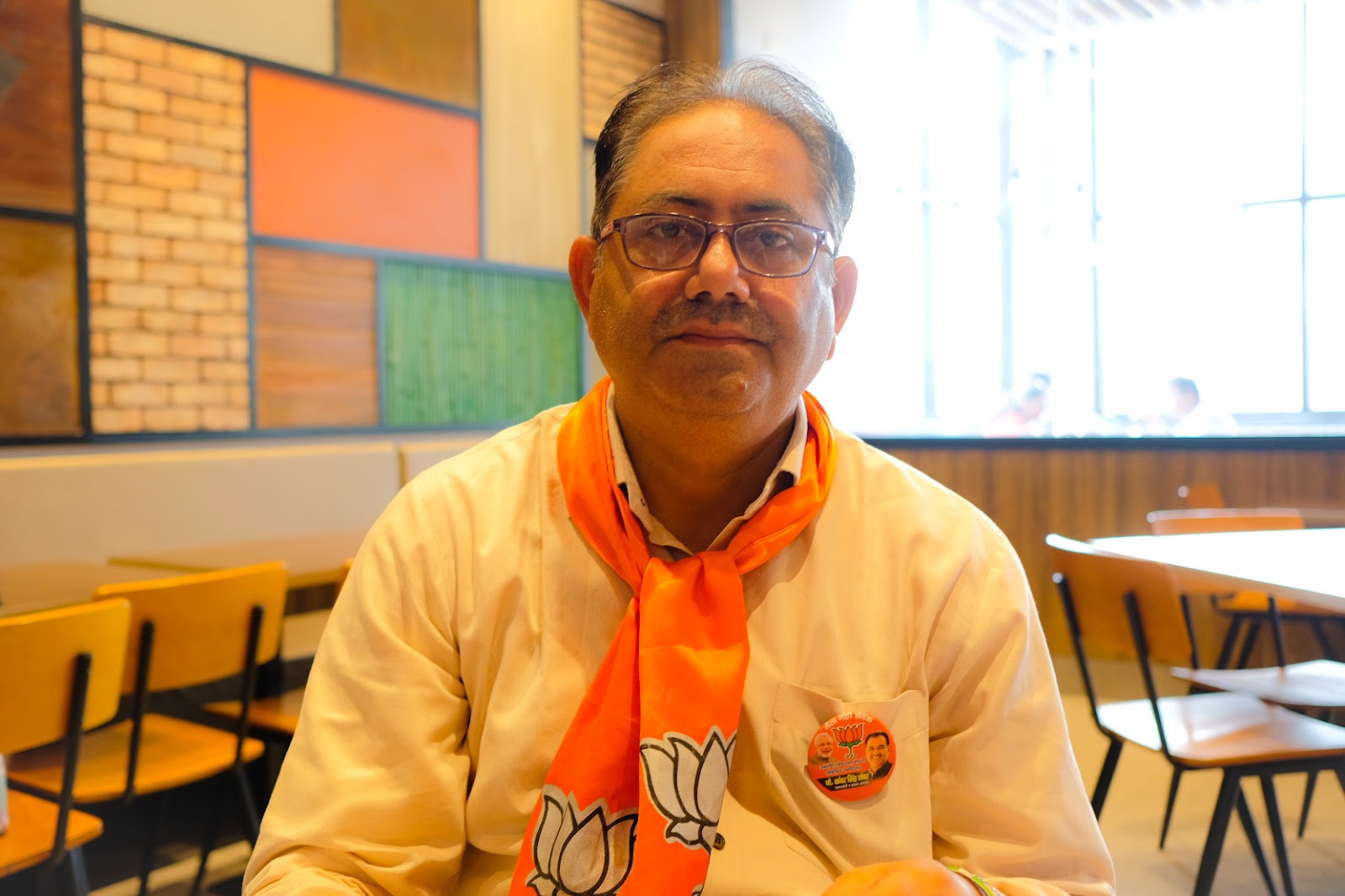 Mehar Chand poses for a quick selfie with The Citizen’s founder editor, and we’re on our way.

This time, the SP and BSP have joined hands across UP, and in Amroha, the gathbandhan has put up Danish Ali who is contesting on a BSP ticket. The Congress has fielded Sachin Chaudhary. The area goes to polls on April 18 in the second phase.

“Here, the fight is between the BJP and the gathbandhan,” says Haider Ali, seated in a small shop in Rajabpur Village further into the Amroha constituency. “Danish Ali is the gathbandhan candidate, and I think he will pull through.” “I don’t know who the Congress candidate is,” he adds.

A customer, Mohammad Zarif, chimes in. “I don’t think the Congress will cut the Muslim vote here.” (In neighbouring Bijnor, Moradabad and Badaun, there are reports of the Congress playing “spoiler” by cutting into the gathbandhan vote.) 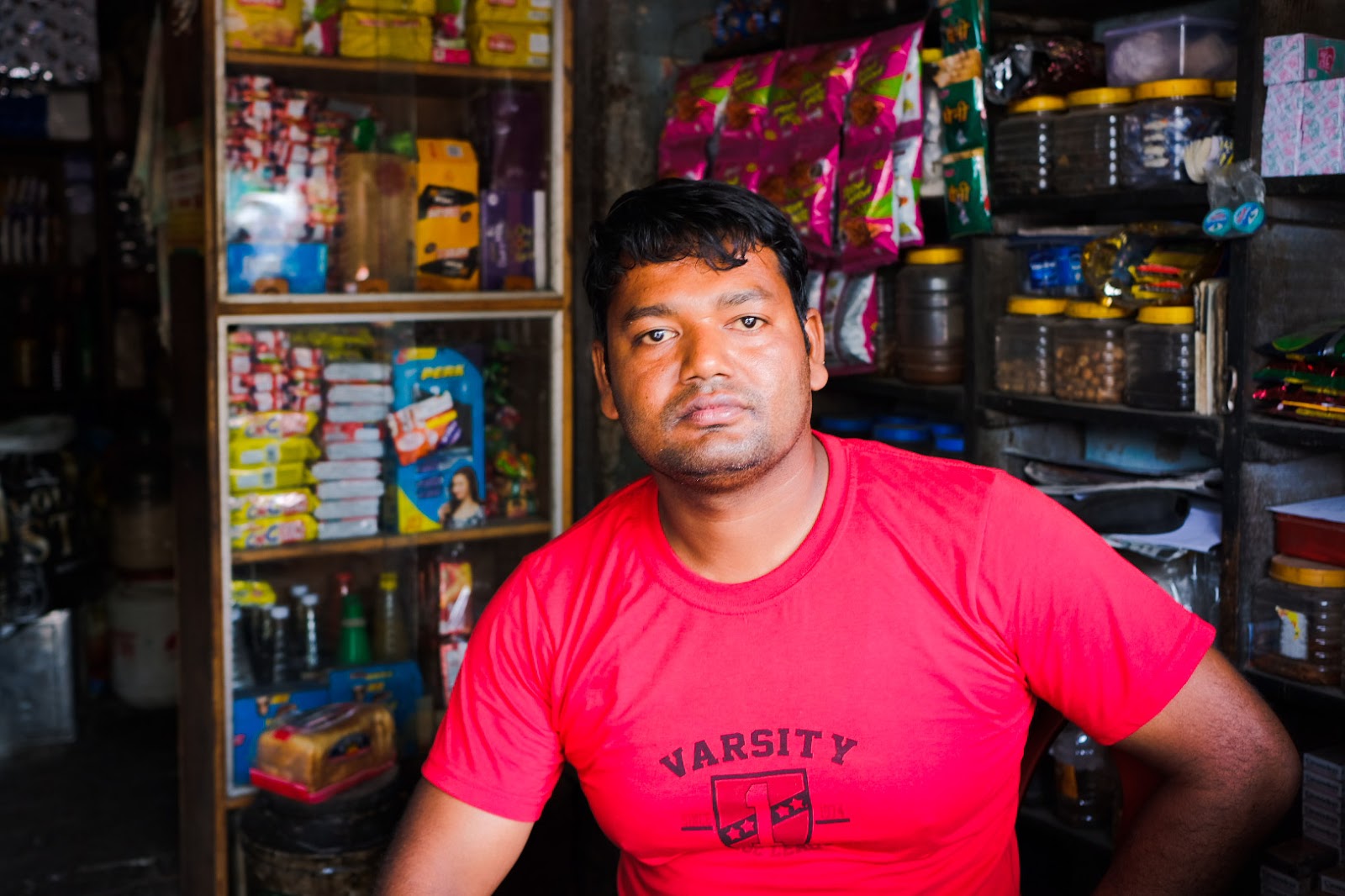 (Haider Ali at his shop in Rajabpur village)

Haider Ali offers his analysis. “The gathbandhan has the Jatav vote and the Muslim vote here. The Jat vote is also fractured - 50 percent of it will remain with the BJP, but 50 percent might go to the gathbandhan. This is because farmers are angry. Sugarcane payments are delayed, tomatoes and potatoes aren’t fetching a good price … har cheez mein problem (there’s difficult in everything).”

At another small shop just a few meters away, Gaurav Garg tells us, “the Congress candidate won’t get much, and whatever he gets, will cut into the BJP vote.” “We are BJP supporters,” he says, “but obviously the BJP won’t do as well as they did in 2014.” “Why? Because of the alliance. The BSP and SP vote is united and that will obviously have an impact.” 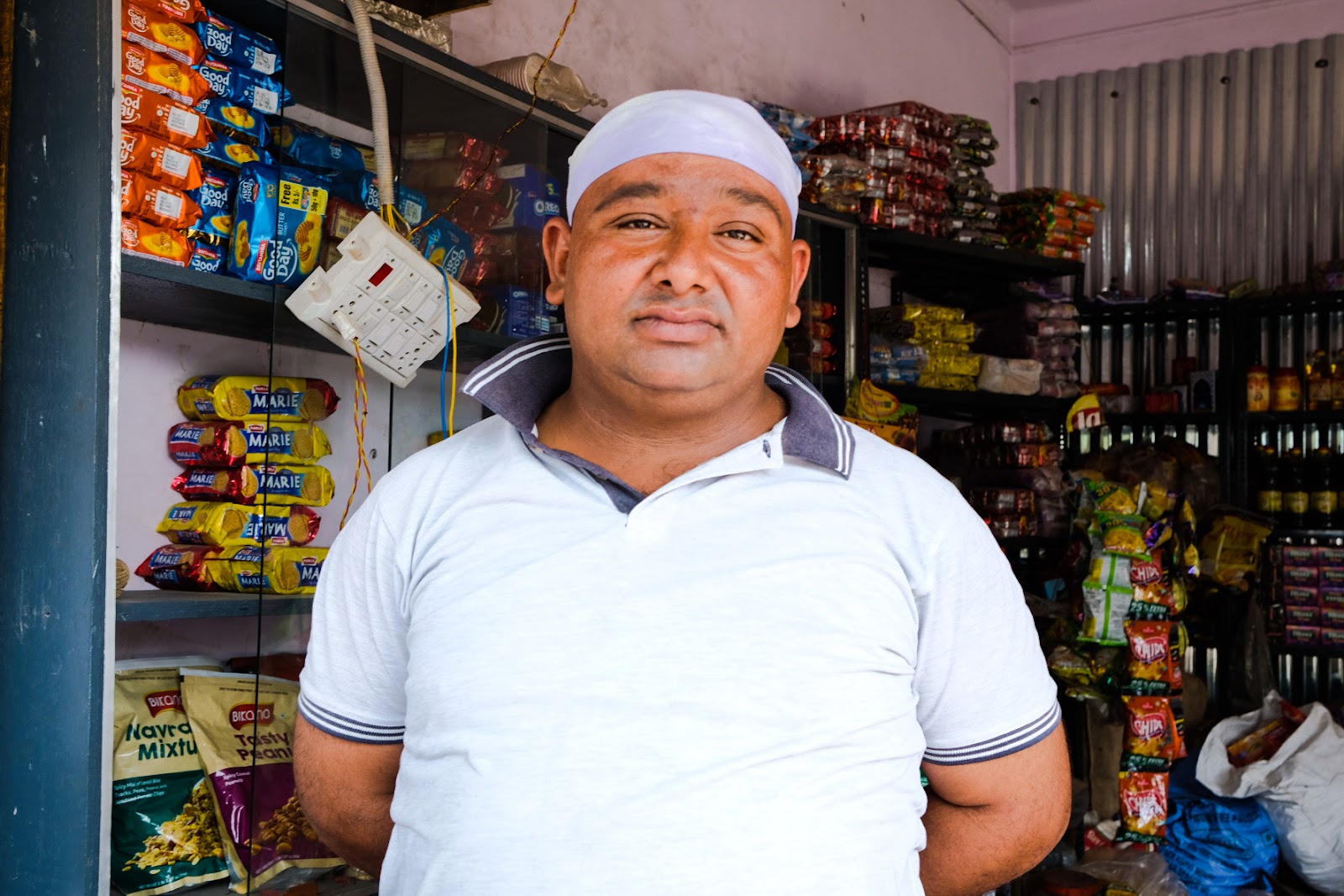 (Gaurav Garg says he supports the BJP, but the gathbandhan is putting up a fight)

Pradeep Aggarwal, a local trader, agrees that the gathbandhan is putting up a fight. “Muslims and Jatavs are uniting,” he says, “so the gathbandhan has a good chance.” Aggarwal says he will vote for the BJP, even as he lists out a number of difficulties he is currently facing. “What to do? For me, there’s no alternative.... The Congress is a non player.”

Across the road, Chaman Tailor says that the alliance has a strong chance. “Gathbandhan has strong presence here. Danish Ali is is contesting from here and Behenji Mayawati is making sure we find our voice again.”

Seated under the shade of a big peepal tree, flipping through the pages of a hindi newspaper, Mohd. Ayaaz says “our vote is for the gathbandhan. We find our representative there.” “Gathbandhan has given us a great opportunity. Such coalitions never happened in UP and people like us are always open to new ideas,” adds Mohd. Anwar, seated next to Ayaaz and peering over the latter’s shoulder at the paper. “We want to see a new leader. I think because of the demand of a new leader, BJP won the assembly elections. But it’s not going to happen this time,” concludes Ayaaz.

In Ambedkar Nagar, the mood is even more decisively in favour of the gathbandhan. “Our vote is with Mayawati,” says Prem Pal Singh, who works as a labourer. “The alliance has been beneficial, because the Muslim and choti jati (lower caste) vote is united.”

A small crowd quickly gathers. “There are five Jatav villages in this area, and we’re all with Mayawati,” is the consensus. 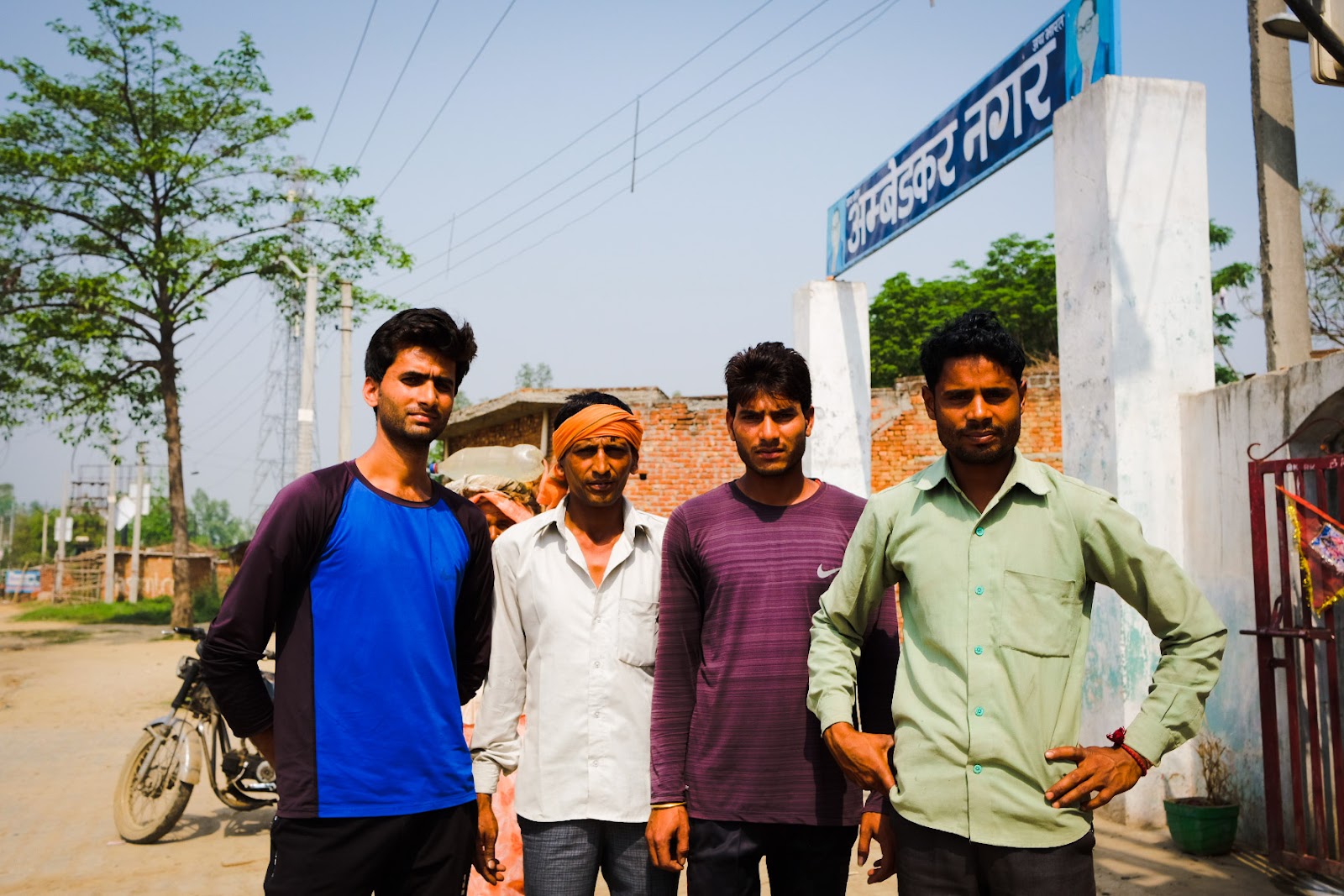 “Behenji ki sarkar banegi,” Prem Pal Singh declares loudly. Amarjit Singh, a local resident and teacher, says that in 2014, 60 percent of the Jatav vote went to the BJP. “Not this time,” he says. “Now, we are all behind the BSP.”

“Modi said he will work for Hindus, and we thought there was truth to that,” Amarjit Singh elaborates. “And yes, while the Hindu factor is there, nothing has been done for the lower castes.”

Bindu Gautam chimes in with political food for thought. “When people are united, there’s peace and that’s when we progress.”

The group of men that have now gathered say that the Jat vote in the area is also with the gathbandhan. “Kheti ka dum nahi mil raha hai (farmers are not getting the fruit for their labour)” Bindu Gautam says. “Jats are upset with the BJP, and they’ll vote with Muslims and Jatavs for the gathbandhan.”

Our conversations with people at a local Jat dominated village, Murha, seemed to corroborate Mehar Chand’s assessment. As we enter Murha, the first person we meet guides us to a group seated under a leafy tree in the interiors of the village.

“It’s fairly straightforward: the Jat vote is with the BJP, but the Muslim and Jatav vote is with the gathbandhan,” says Yogendra Singh. “There’s no Hindu Muslim angle to this; if there were, Jatavs and Muslims wouldn’t be united.” 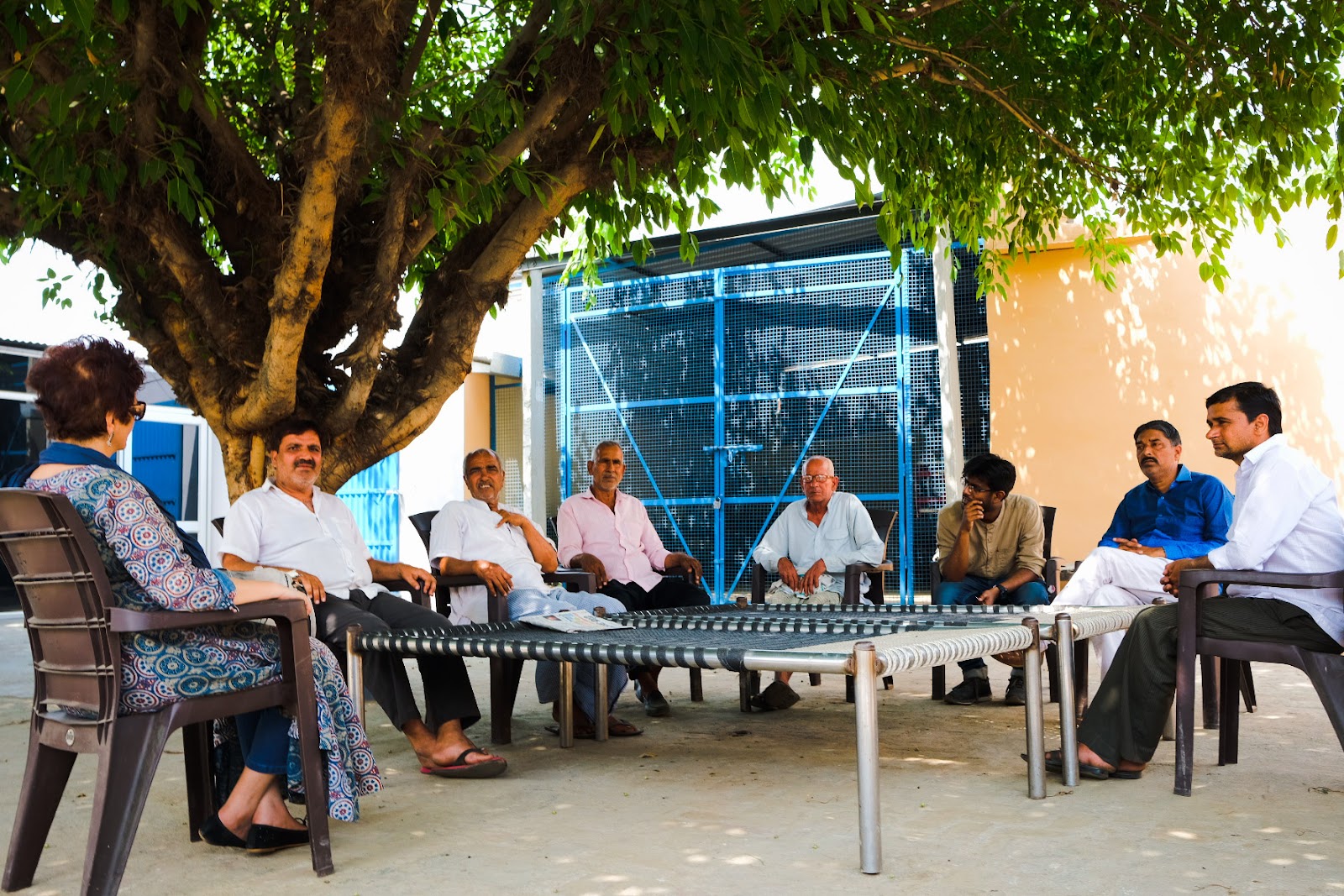 (We speak to Yogendra Singh, Yashpal Singh and others, who say the Jat vote remains with the BJP)

“Our vote is not for any candidate, but for Modi,” adds Yashpal Singh. “No one is concerned with Ajit Singh (Jat leader and Rashtriya Lok Dal chief); here, the Jat vote is 100 percent behind Modi.”

The group says that while the government in power has made little difference to their daily lives, India’s international standing has improved. They also say that they have faced no difficulties regarding payments for agricultural produce. “We are getting sugarcane payments on time; elsewhere there may be difficulty, but not here.”

“Even if Jats are upset, they’ll still vote for Modi,” says Yogendra Singh. “Yes there were farmer protests, but all that is forgotten now.”

When asked about the Balakot strikes, the group says “all that is immaterial.” “All that keeps happening,” says Yogendra Singh, “we’re not concerned with it.”

“There is one grouse that I would like to highlight,” he offers, unprompted. “There was a system they have destroyed now, the old cattle are dying. The gaushalas are not enough, and even then, there is no money for the cows. The government is giving Rs 30 for one cow. Tell me what will this do when just the price of fodder is Rs 1200-1600 per quintal. The cows are in deep distress, they are sick and starving and dying, “ said Yogendra Singh.

Others nodded as he went on, “we had a system and they (the government) has unnecessarily interfered in this system. And now the old and ageing cows are all lying there, starving.” We did not ask what the system was, nor did he elaborate as everyone sitting there knew what he was talking about. 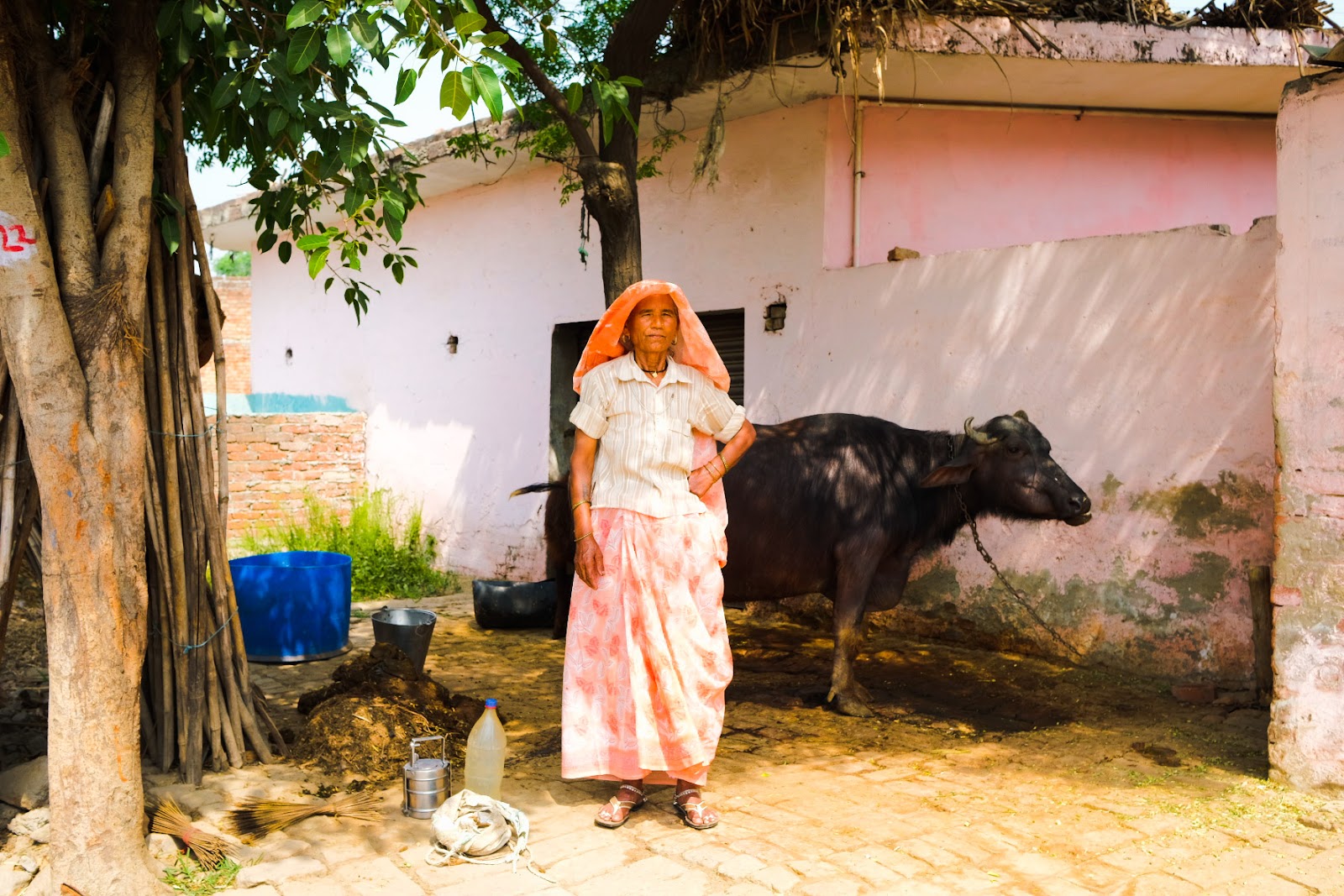 (A woman with cattle near Ambedkar Nagar)