Badaun in UP polls tomorrow #TCVotes

BADAUN: The strangest thing about this town in the Rohilkhand region of Western Uttar Pradesh is that it sits on goldmine of heritage about which its people are completely oblivious barring an exception or two.

The electoral contest centres around the success or failure of attempts to polarise the population along religious lines keeping in view its large Muslim population. The great Sufi tradition of Budaun lies forgotten in the sparring between political rivals for this Lok Sabha seat.

At first glance it appears to be a pretty ordinary town with narrow and dirty streets and lanes lined with even dirtier drains. As one meanders down these lanes where e-rickshaws, motorbikes and cars literally brush past each other, one is suddenly in front of a huge gate with arches. Just by crossing the gate the visitor is magically transported into an altogether different world for in front stands the majestic and beautiful Jama Masjid, a 13th century mosque built by the same Turkish Slave dynasty ruler Shamsuddin Iltutmish who completed the Qutub Minar in Delhi too.

The contrast between the mosque with its domes, arches and pillars and beautiful decorations and the surrounding run-down lanes and houses is stark. The former speaks of aesthetics and power while the latter is representative of neglect and squalor and of course an inactive municipal body. A little way away from the Mosque is the home of a latter-day famous son of Budaun, Shakeel Badayuni, Bollywood’s lyricist of ‘Chaudhvi Ka Chand’, the Guru Dutt masterpiece.

An A-4 size poster is pasted on the outer wall of an otherwise dilapidated house where he was born is the only sign that explains the ‘Badayuni’ part of Shakeel’s name. His descendants live in the house but are not rich people as is evident from the disrepair of the house. Rashid, 50 and Ruman 25 are among the descendants who live there. They are painters but perhaps can’t afford to carry out the long overdue coat of paint that their ancestral house (and that of Shakeel) needs. 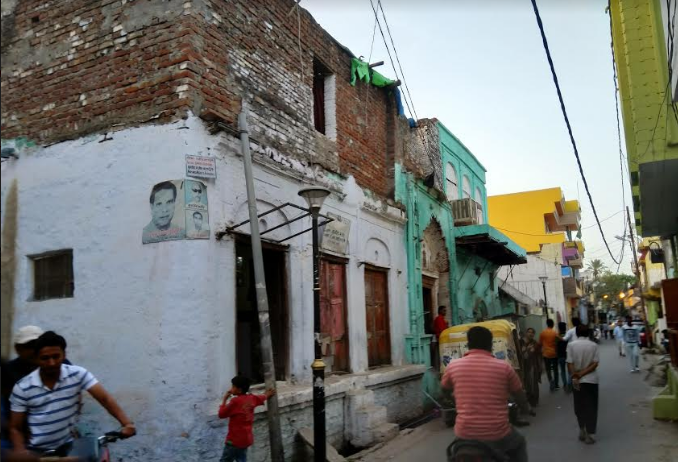 Most Muslims by tradition are supporters of the Samajwadi Party as are Rashid and Ruman. But this time a twist has been given to the tale by the defection of a major Samajwadi leader and former minister Abid Raza to the Congress. Raza is vice president of the state unit and his support has considerably boosted the chances of the party’s candidate Salim Sherwani as many Samajwadi supporters are Abid Raza loyalists as well. The alliance candidate Dharmendra Yadav is the sitting MP and is considered to be the strongest of the three. The Bharatiya Janata Party has put up Sanghamitra Maurya who is the daughter of state cabinet minister Swami Prasad Maurya.

But the essence of Budaun is the large number of Dargahs that it has many of which are in a state of neglect. Hazrat Nizamuddin, whose Dargah is in Delhi, was born in Budaun. In the town itself is the Dargah of Hazrat Mazak Mian which is visited by many pilgrims. Maulvi Mohammad Izhar Ali Shah, 70, attends to those who come to the shrine to hoping to get a solution to their life’s problems.

The Maulvi, a descendant of the Pir, felt that the people of Budaun were neglecting the many mazhars that dotted the town. The welfare of the town and harmony between different communities depended on these traditions of Budaun. He was critical of Muslims who were trying to monopolise some of these mazhars and denying Hindus the traditional access to them.

His own ancestors he claims came from Medina in the 12th century and settled down in Budaun. “People from outside the town come and get faiz (peace, goodwill) from the Dargahs but the people of this town itself do not appreciate the power of this tradition.” Mohammad Ishtiaq, a cobbler who has a shop in the heart of the town near the hundred-year-old clock tower agrees and describes this area as a ‘peerana’. “The town is full of mazhars.”

His associate Ashraf Hussain says that business is not good these days. Of course, the currency ban affected business but the recent greater demand for cheaper foam shoes has also meant that there is less work for Ashraf since his speciality is leather. “The demand has changed to foam and my forte is leather… in any case there is a shortage of leather.” Is there communal harmony in Budaun? Yes there is, he says, recalling that there were clashes a very long time back – in 1989. But at that time, they were provoked by outsiders.

Brijendra Patel, 55 the owner of a provision store opposite the Hazrat Mazak Mian Dargah too recalls the communal trouble of 1989 and speaks of Muslim domination in the area. But even as he puts BJP stickers on the walls outside his shop he is critical of the policies of the NDA government.

The policies of the UPA government were easy to understand and the benefits were clear to everyone. But it was very difficult to comprehend the polices of the NDA government which were extremely complicated. Brijendra’s son Ankur, 30 is an engineer and has worked in Faridabad for some years. Now he helps his father out in the store. But he too agrees that the Dargahs are not being looked after well and points to the row of shops that obstruct the view of the Hazrat Mazak Mian Dargah. “They should not have been built,” feels Ankur.

The rural areas of the district are not poor and at this time of the year wheat grows in large areas. But the farmers grow cash crops like potatoes and metha (commonly known in India as pudina) as well. In Salarpur village Azhar Hussain, 30 has stacked up sacks of potatoes for transportation to the vegetable markets.

“I get Rs. 6 per kilo at the wholesale market,” says Azhar who is a graduate. After the potato crop mentha is planted in the fields. Once the mentha is ready the farmers extract the oil which is then stored and sold to get the best rates on the commodities exchange. Mentha oil is used in food, flavouring, pharmaceutical and cosmetics industry and sells for about Rs. 1,500 per kilo.

Azhar’s father Salamat Hussain, 70, is a Congress loyalist through thick and thin as is evident from the flag that flies from the roof of his store room near his fields still carries the charkha symbol, the original flag of the party. Did he join some other party when the Congress fell on bad days? “No, I have always been with this party,” says Salamat who has studied up to high school. He is general secretary of the district Congress committee and a former zilla panchayat member. But his son has benefitted from the Sikshamitra scheme of the Akhilesh Yadav government and even became a teacher before the scheme was reversed by the current state government of Uttar Pradesh.

A strong breeze blows as we sit under the shade of ‘chausa’ mango trees next to the sacks of potatoes, Salamat explains his admiration for the Congress, a party that he joined as far back as 1971 thus, “I like their leaders and their honesty,” and is confident that Salim Sherwani is going to win. He has a strong distrust for BSP leader Mayawati. Salamat is an odd mixture of a man who is educated and yet has great faith in the healing powers of the Chote Sarkar and Bade Sarkar dargahs, perhaps representing the strange dilemma of Budaun.