Poonam Sinha Prepares to Smile Her Way into Lucknow's Heart: 'I Am Here to Stay'

LUCKNOW: Poonam Sinha’s appeal to voters in Lucknow is simple. Do not vote the Bharatiya Janata Party (BJP) back to power if India is to remain a democracy.

Contesting the 17th Lok Sabha elections from Lucknow against BJP candidate Union Home Minister Rajnath Singh, Sinha told The Citizen that her greatest fear is that the present leadership of the BJP could change the country from a democracy to a dictatorship.

The 70 year old Sinha is a former beauty queen, actress and home maker. She has been married to Bollywood actor and now Congressman Shatrughan Sinha for nearly four decades. This is her first foray into national politics. Her husband is contesting the elections from Patna Sahib, Bihar on the Congress party ticket.

Sinha joined the Samajwadi Party (SP) on April 16 and filed her nomination papers to contest the 2019 Lok Sabha elections from Lucknow on April 18. On the same day her roadshow drew a massive crowd that painted the city red with countless flags waving in unison in the same colour also the official colour of the SP.

Sinha’s sweet smile is balm on the dusty streets of Lucknow and a pleasant change from Rajnath Singh’s dour personality. Sinha is surely a crowd puller. Whether the crowd will translate its numbers into votes will be known after polling takes place on May 6 in Lucknow.

Sinha is backed by the mahagathbandhan, the great alliance between the SP, Bahujan Samaj Party (BSP) and the Rashtriya Lok Dal (RLD) but her fight against BJP’s Singh, a former Uttar Pradesh (UP) chief minister who won from Lucknow in the last general elections in 2014 may not be easy.

However Sinha is unfazed. She says that Singh won Lucknow on the reputation of “Atal ji”who was a politician with a heart and the people of the city loved him and made him win again and again. In the last five years Singh has done little for Lucknow except try and create a sectarian rift between Shia and Sunni Muslims in the city.

Atal Bihari Vajpayee, BJP leader and former Prime Minister first won the Lok Sabha seat from here in 1991 because he was a leader who brought people together in friendship and in love. That is how Lucknow became a stronghold of the BJP but today the city is considered its backyard by the same party where divisive politics of the day is tearing apart the traditional way of living together. In the last general elections and at the peak of a Narendra Modi wave, Singh had defeated Rita Bahuguna from Lucknow who later left the Congress Party for the BJP.

With no political work to back her contest, Sinha is hoping to smile her way into the hearts of Lucknow voters for the time being. She has been canvassing non stop in different parts of Lucknow, a constituency that is home to four lakh Kayastha voters, 3.5 lakh Muslims voters and 1.3 lakh Sindhi voters. A Sindhi herself and married to a Kayastha, Sinha charmed the community of Sindhis in her first meeting with them in Lucknow by speaking with them in their mother tongue.

Excerpts from an exclusive interview with Sinha:

It is a long journey from Mumbai to Lucknow. What makes you come all the way to contest elections in Lucknow?

I have been in talks with the Samajwadi Party leadership since last December and the very energetic and youthful Akhilesh Yadav convinced me to join his party. Besides my association with Lucknow goes back a long time. When my parents migrated from Karachi in 1947 they had first found a home in Lucknow.

Shatrughan Sinha, your actor husband has been a member of the BJP forever. When you decided to participate in active politics did you ever want to join the BJP as well?

Not really but I got interested in politics about a decade ago. My children were grown up and settled in their respective professions. The BJP of that time was led by people with a heart. There was never any talk of ever leaving the BJP. But the present leadership is heartless. It talks to no one it listens to no one…it is like a wild fire in the forest. It will burn itself out and take the entire country with it. It is time for change and that change I see in Akhilesh Yadav who will make a Prime Minister that this country deserves.

If Akhilesh Yadav becomes Prime Minister and migrates to Delhi won’t UP and Lucknow be orphaned?

(Laughs) Not at all. Akhilesh Yadav is too dynamic to let that happen. The country is in a crisis and we have to get together to do our bit.

What is the worst thing about the BJP today?

As big a danger as India becoming a dictatorship from a vibrant democracy. That is the greatest danger I see of voting the BJP back to power. We realised that the BJP of today is not the party that my husband had joined more than three decades ago. Around 2015 the discomfort began at the direction that the BJP was taking and that is when we began talking about staying clear of that kind of politics. That is why my husband decided to join the Congress Party on April 6 and I am happy to be with the SP and with Mayawati ji.

You have been in Lucknow only for a few days but what is it that people tell you they want most today?

I am meeting people here in large numbers and they tell me one thing that they want the city to return to the good work started by Akhilesh Yadav. The people tell me that Baba Yogi, Chief Minister has undone everything good that the SP had achieved in its five year term between 2012 and 2017. Voters tell me they want the good old days of the SP back in Lucknow and in UP.

Shatrughan Sinha joined the Congress Party recently…did you ever think of joining the same party?

You know there is not much difference between the core ideology of both the Congress Party and the Samajwadi Party. Both these political parties have the good of the nation and its citizens above all. I was already in talks with the SP since the end of last year before my husband joined the Congress Party. Today I am happy that I will get to work with a people’s politician like Akhilesh Yadav.

Will you too take the votes and disappear to Delhi and Mumbai after the elections?

No. Lucknow is my home and I will live here. 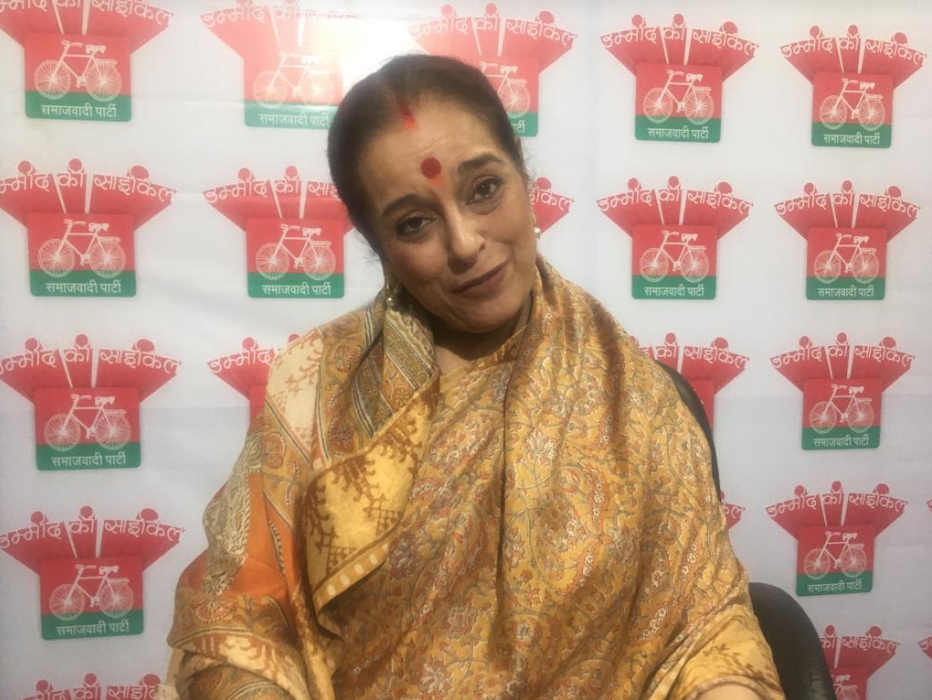