Kota Still to Make Up Its Political Mind

KOTA: This Rajasthan town is known nationwide for providing a way out to confused students looking to enter highly selective engineering institutions in India. Lately, Kota which has been a BJP stronghold seems to be confused in finding solutions to its political problems. The constituency votes on April 29.

The Kota parliamentary constituency consists of eight assembly segments. In the 2018 assembly elections the BJP managed to win five segments, while the Congress won three. Kota North is under Congress rule at present, and in Kota South the BJP has found its foothold.

Congress president Rahul Gandhi visited Kota on April 25 to address a public gathering. This was his second rally in the constituency: a month ago he addressed a farmers’ rally in the Bundi assembly segment, where Chief Minister Ashok Gehlot and Deputy CM Sachin Pilot were also present.

This general election the Congress has fielded a seasoned politician, Ramnaraian Meena who has been MLA four times and is the sitting MLA from Pipalda, in Kota. He was the MP from Kota for the first time in 1998, under A.B.Vajpayee’s 13-month government.

Addressing a public gathering in Kota recently, Meena accused Prime Minister Modi of being a liar. “The biggest liars at present are Narendra Modi, Amit Shah and the BJP. They haven’t fulfilled their promises. Modi didn’t give jobs or Rs.15 lakhs to the people, while BJP was not able to build a Ram temple,” he said.

He added, “Former PM Manmohan Singh used to be silent because he was working, whereas PM Modi only speaks and does nothing.” 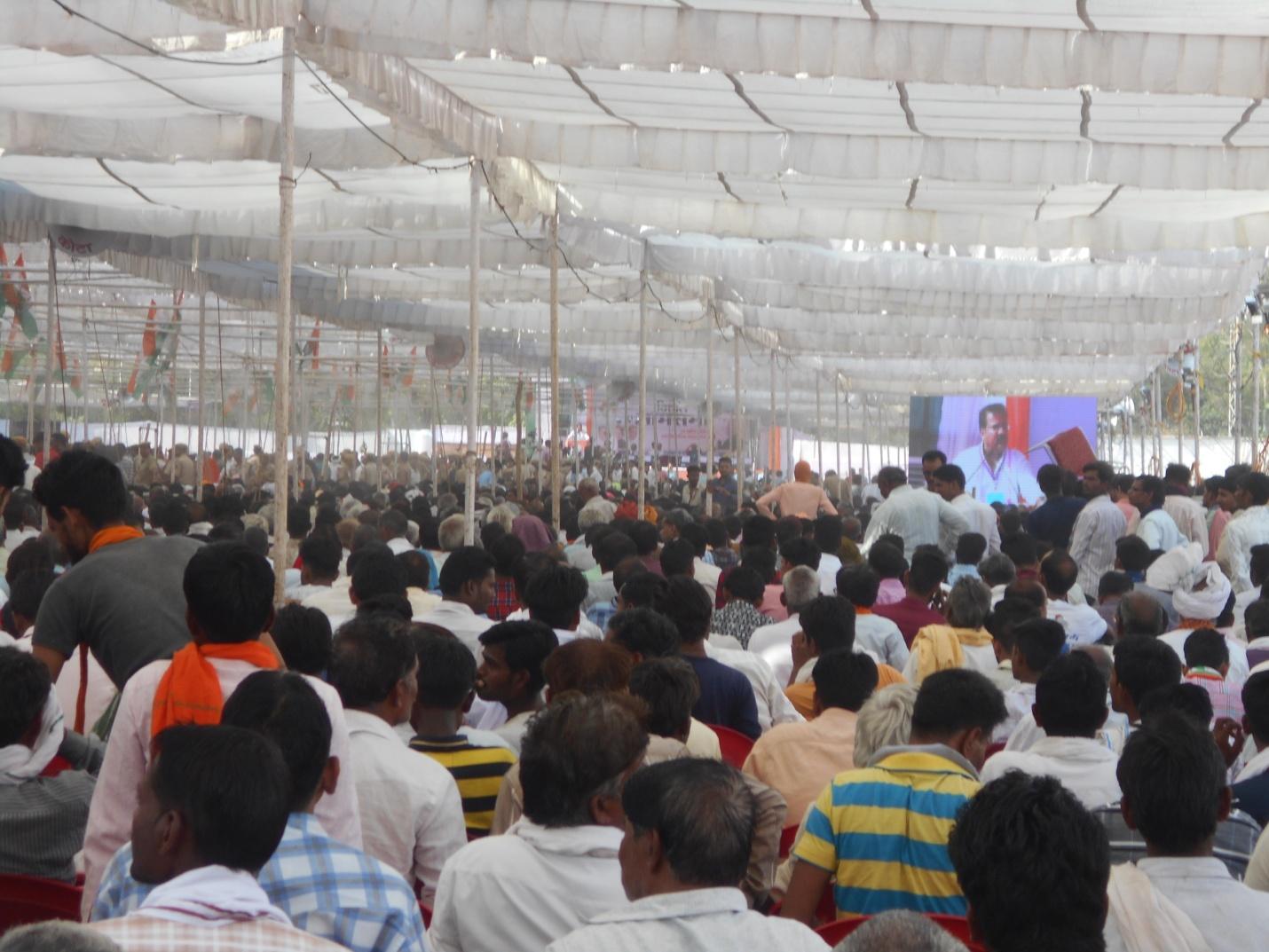 At a Congress rally in Kota

Rahul Gandhi meanwhile began his speech by saying “Chowkidar...” and let the people at the rally complete the phrase “...chor hai”. He used the stage to target the prime minister on demonetisation, alleging that all the public money had been given to six prominent businessmen.

Gandhi also targeted the central government for its failure to provide jobs and economic assistance to the weaker sections of society.

After attending the rally, The Citizen headed to Bundi town, which is another assembly segment under the Kota constituency. On our way there we made pit stops at villages nearby. One such village was Govindpur Baori. 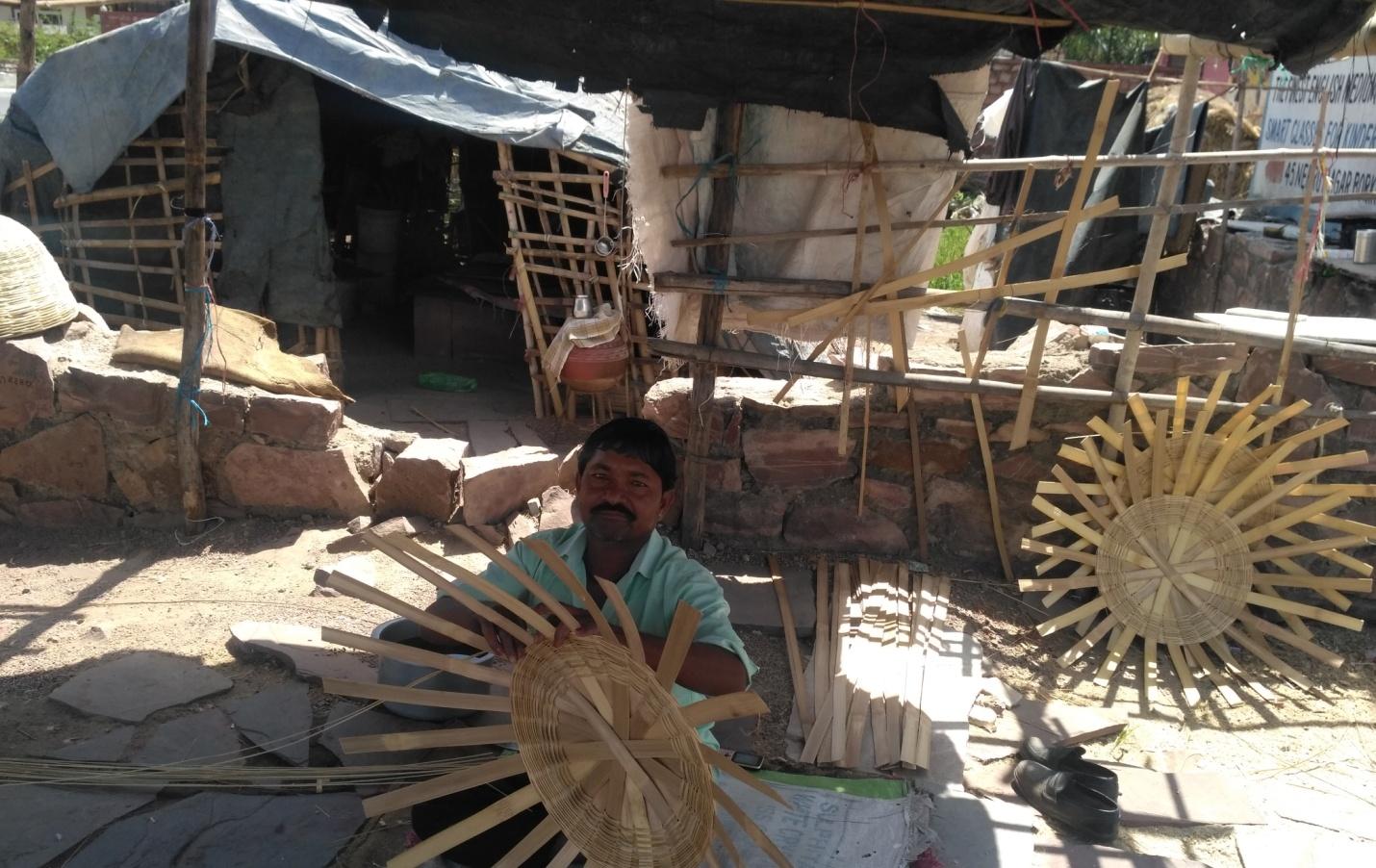 Banwari Meena from Govindpur Baori, who weaves baskets for a living, said “I have voted for Congress as well as BJP. My situation has been the same for the past 15 years. Governments never fulfil promises.”

“This time I will vote as per the will of the village sarpanch.”

Taking the hint, of a patron-client relationship, The Citizen went to the house of the sarpanch. We found that he was not in the village, and had gone to the nearby town of Bundi.

Irfan Ahmed, another local resident and a life science graduate said, “BJP MP Om Birla’s performance as an MP is just okay. Under his tenure a few infrastructure projects got completed like bridges and roads, but job creation is still a big problem. There are only a few industries in Kota. Only the coaching industry is providing jobs here, but it has limited scope.”

Ahmed also mentioned that “from 2015 till now around 50-60 farmers have committed suicide in the Hadoti region nearby. Farmers are angry with the BJP. Ramnaraian has an image of being pro-poor. Let’s see what happens!” 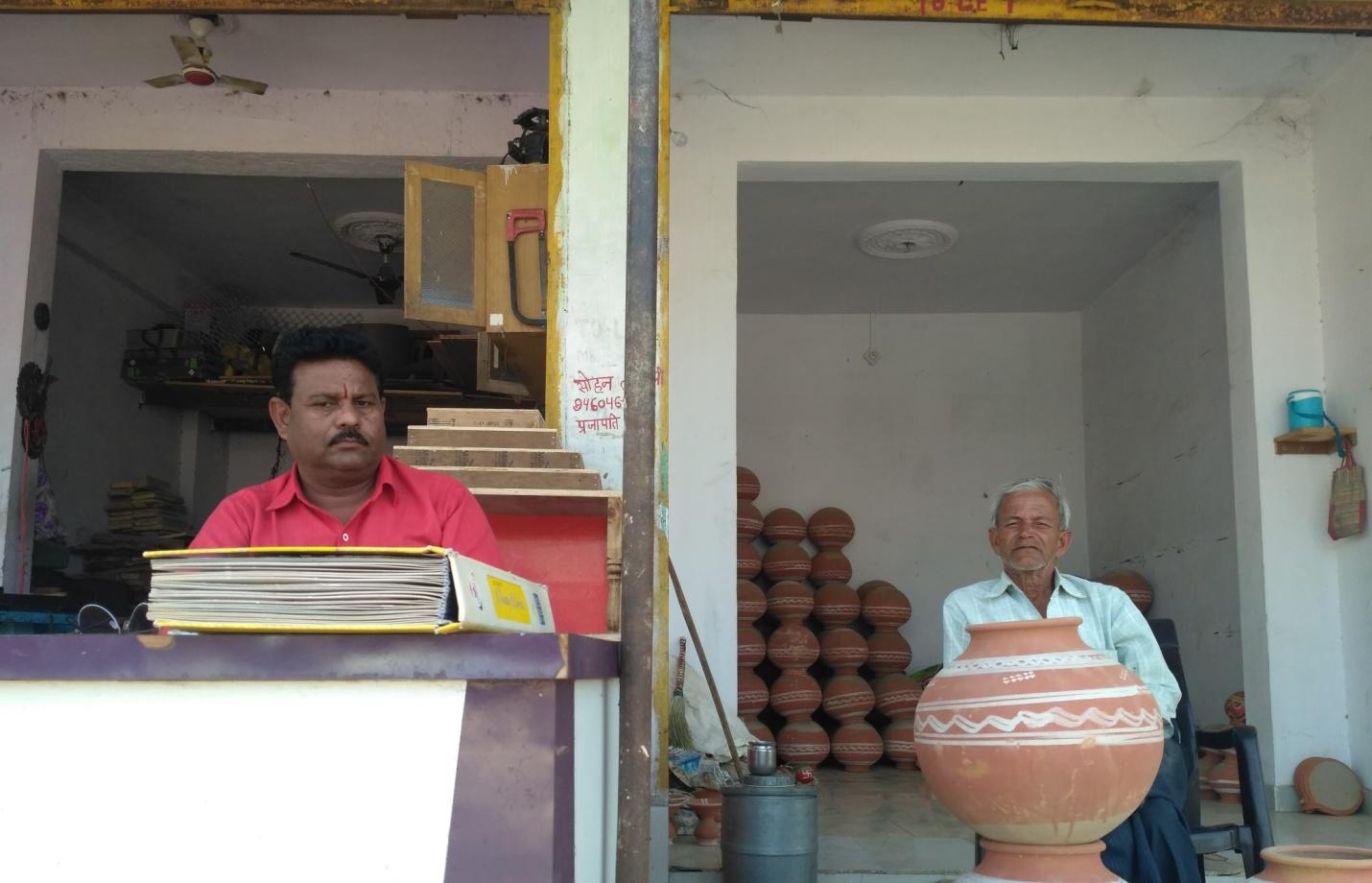 Arun Gupta, who owns a spare parts store, discussed the ongoing political tussle between the BJP and the Congress. “No one can be like Narendra Modi. The country needs him. Who is the face of the opposition? Pakistan fears us now. Modi has made our country famous internationally.”

“My business was a little bit affected due to demonetisation,” Gupta added, “but it recovered. However, GST is terrible. It causes problems to me - but you have to think about the nation. Only Modi can take such steps for the nation.”

Kunwar Singh, a potter, said on the contrary that “The lotus is not for us. They work for rich people. The hand has worked for the poor. Kota developed prosperously between 2009 and 2013 when the Congress was both at the centre and state, but the same didn’t happen with the BJP in power.

“Development only took place in the Jhalawar area – which is 50 kilometres away from Kota and the constituency of former CM Vasundhara Raje.”

With a smile he said, “National security is an important issue, but for the poor work is also important. I earn Rs.120 to 200 per day. The Balakot strikes have no effect on me. I am still struggling with my livelihood.”

The Citizen spoke next with a group of women in Naya Gaon (New Village) a few kilometres away from the hustle and bustle of Kota. Hiding her face under a veil Geeta Bai said, “I will vote for Bhajpa. Vasundhara Rani (queen) has given the Bhamashah card. It has helped me a lot. I don’t have to depend on my husband or brother-in-law for money.”

Asked whether the Balakot strikes would affect the vote, Fulwari Devi sipped her glass of sugarcane juice said, “Only Modi could have done it. I watched it on television. It said we killed 200-300 terrorists. My father-in-law was in the army and he was saying Pakistan should’ve been taught a lesson a long time back.”

On April 24 Vasundhara Raje addressed a rally in Kota asking people to vote for Om Birla, the local BJP MP up for reelection. Riding on the nationalist hysteria, she said to the public, “If you want your country to be safe, vote for the lotus. Only PM Modi can keep you safe. PM Modi will win only if Om Birla wins. Vote for him.”

After Birla’s name was declared by the BJP, several factions within the party have developed in Kota. Local sources say that the former BJP MLA from Kota North, Prahlad Gunjal was not happy with the party’s decision to give the ticket to the sitting MP.

The former BJP MLA from Ladpura, Bhawani Singh Rajawat also laid claim to the BJP ticket from Kota-Baran. He too was angry with party’s decision and has since gone underground.

On our way back to Kota The Citizen meets Vipin Bheel who owns a roadside stall. Bheel offers a sincere critique of electoral processes, and the failure in implementing the model code of conduct during elections.

“Prediction of votes doesn’t matter. Results are useless, just like politicians. Whoever has more money will win. We have elections on April 29 and campaigning will stop on April 27 evening. But, party workers of both BJP and Congress will go and visit every household on the 28th to convince people to vote for them,” Bheel said.

“It has continued here for many years. I have been living in Kota for the past 30 years and every time the situation is the same. Those who can offer money will win this election.” 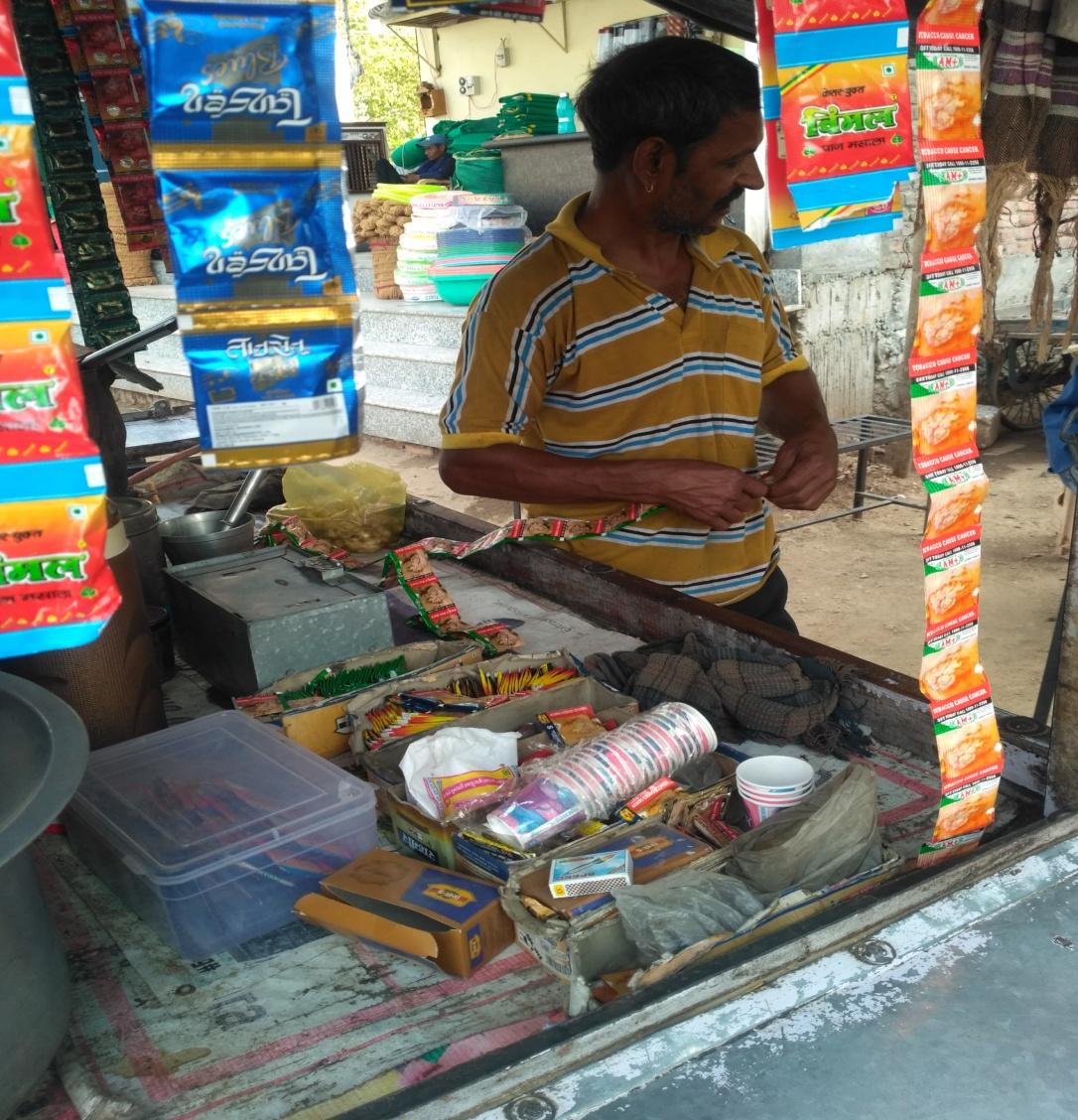