It is a Fight for Political Revival in Sangrur

A shrinking AAP, a divided Congress and a desecrated SAD

SANGRUR: In the hot and dusty, politically volatile Malwa region of Punjab the Sangrur parliamentary constituency is witnessing a three side fight for political revival. The seat is a clear representative of the problems that continue to plague rural Punjab, and people here stand miffed at successive governments at state and centre for failing to provide them any succour.

The three front runners at this point are Bhagwant Mann of the Aam Aadmi Party (AAP) who is the sitting Lok Sabha member, Parminder Dhindsa of the Shiromani Akali Dal (SAD - Badal) and Kewal Singh Dhillon of the Congress party. The other notable name in the fray is former MP Simranjit Singh Mann of the SAD (Amritsar) which is seen as the hardline party of the Sikhs.

Bhagwant Mann is fighting the most important battle for AAP as he is the lone candidate who can win and prevent his party from falling into oblivion in the state, where it had threatened to form the government just two years ago.

Today AAP has shrunk from a pan Punjab party to one that is mainly confined to Sangrur. Its leaders include Mann as MP, Aman Arora as chief of the poll campaign committee and Harpal Singh Cheema as the leader of opposition in the Punjab Assembly, all of them from Sangrur. The constituency includes the Sangrur and Barnala districts and emerged as the AAP stronghold in the 2017 assembly polls, sending five of its nine MLAs.

With the AAP downslide continuing and its support base shrinking across Punjab, the bastion of Sangrur is offering some hope of re-election for the Jhadu (broom, AAP’s poll symbol) as it is better known among the masses. In Punjab the party continues to witness desertion after the departures of leaders and its ally the Lok Insaf Party and a split in the last two years.

Mann has been hitting out at Chief Minister Amarinder Singh of the Congress for engineering the departures of AAP leaders in the state, and at Prime Minister Narendra Modi for doing the same in Delhi. “What is the point of having elections? You should allow our leaders to win and then purchase them. Shame on you for such politics! I will not let my people down,” he says in a video that he shared on a social media site.

If Parminder Dhindsa, a former cabinet minister in the last Akali-Bharatiya Janata Party (BJP) led state government, can win this seat it will be a major step towards reviving the fortunes of the Akalis in Punjab. As of now the Akali Dal stands discredited, particularly on the issue of desecration of holy texts and farm distress.

Dhindsa’s own father Sukhdev Singh Dhindsa, who has been a senior Akali leader and a former state and union minister, has not turned up to campaign for him as he was among those who raised the banner of revolt against former chief minister Parkash Singh Badal and his son Sukhbir who is the Akali president, on the issue of desecration since 2015. While other leaders left the party to form the SAD (Taksali), Sukhdev Singh Dhindsa has gone into oblivion without having left his party.

For Dhillon, a victory would mean his own political revival. He lost the 2017 assembly poll from Barnala. Sources say that it is his close connect with Amarinder Singh that fetched him the ticket for the Lok Sabha polls.

The Sangrur seat is politically very important because it is an area that has witnessed large scale farm distress and a very high number of suicides by farmers. 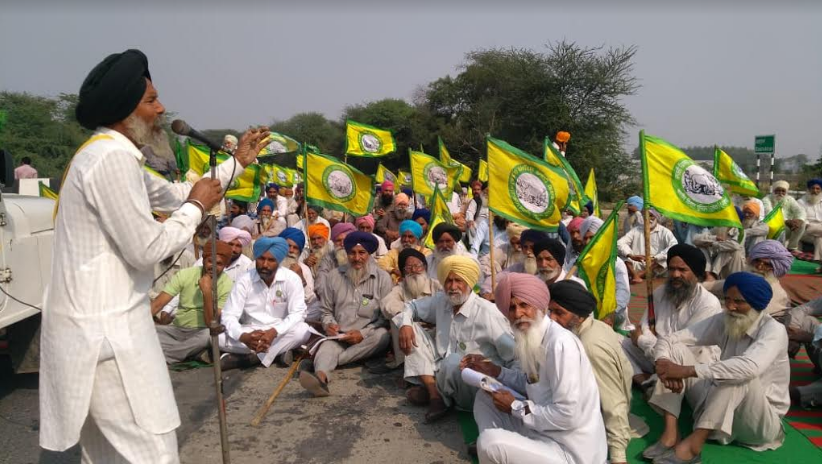 Ever since the Congress government came to power making tall promises to improve the lot of distressed farmers, there have been 179 suicides in Sangrur district as of last month. Farmer groups say there have been 1,070 farmer suicides across Punjab so far in this government’s term.

Gobinder Singh of Mangwal village who is a senior functionary of the Bharatiya Kisan Union (Ugrahan) claims that this figure, which includes 15 women, only reflects media reports and that the actual figure could be much higher.

“They are neither Congress nor Akali but Mohammad Bin Tughlaq and Ahmed Shah Abdali who plundered the country. They are playing political games after turning the country into a political field.” This is how Gobinder Singh describes the attitude of the Congress and the Akalis towards farmers’ plight.

On being asked what prevents farmers from uniting and claiming their rights, Singh tells The Citizen, “The governments have been clever enough to raise parallel farmer organisations to divide and mislead farmers. Today the farmer stands cheated. He has not got anything with respect to the implementation of the Swaminathan Commission report. The loan waiver promised has been scaled down massively and very few have got any relief.”

There have been reports in the past of farmers ending their lives on the day their daughters were to get married. “This is because they could not arrange for money from any source till the last moment. The banks get farmers to sign documents when extending loans, and when the latter are unable to repay the banks shame them by publicly displaying their photographs. They calculate that to save his honour the farmer will go to any extent to repay the loan. Is this the way to treat the man who starves himself to produce food for others?” asked Singh.

“Farm distress means a shortage of food and other essentials that are driving women of such households into depression. Just like the boys, the girls in these families are well educated and are equally frustrated at not getting jobs. The youth is not interested in agriculture as it is no longer a remunerative vocation,” pointed out another farmer, Bharpur Singh.

“Sangrur also has health issues to deal with. It has the highest incidence of Hepatitis C, commonly referred to as kala piliya (dark yellowness) in Punjab. There is also a high incidence of cancer. There were some major health initiatives during the previous SAD-BJP regime in the state that have proved to be a great help to the poor people,” disclosed an employee of the health department.

Residents of the area are very worried about the youth migrating to countries like Canada and Australia in large numbers. They say that the social implications of this phenomenon will be visible only after a few years.

Coming back to the contestants, Mann remains a popular candidate. “He is the one who is the most visible in the rural areas. It is a treat listening to him as one at least forgets the miseries of life when he is regaling you, even if it is a political speech,” observe a group of women at the main bus stand in Sangrur.

Even otherwise, people in the villages here say that Mann has been the only one raising Punjab’s issues vociferously in Parliament. They point out that the utilisation of MPLADS funds have been the most transparent in his case. Another factor in Mann’s popularity is his relentless efforts to secure the safety of Punjabis detained in other countries from time to time.

“Without bothering about the place of residence, religious or political affiliations, Mann has been taking up such matters with the Minister of External Affairs Sushma Swaraj whenever any Punjabi has been in distress. He has been raising farm issues in Parliament and has even taken on PM Modi from time to time,” said a resident of Dhanaula town.

Dhindsa meanwhile has been promising development along with Modi’s model of growth. But he has been facing a tough time on the issue of sacrilege of holy texts that took place during the tenure of the SAD-BJP regime. He has been trying to wriggle out saying his party wants an honest probe into the matter while the Congress government is practising partisan politics on the issue. He is also trying to sell the idea to the electorate that both demonetisation and the Goods and Services Tax will deliver long term benefits to the country. The failure of the Akalis to revive on Punjab’s political turf is a major roadblock for him.

Dhillon on the other hand is promising voters a university and industrial development. But he has been facing hostile crowds on the Amarinder Singh government’s failure to provide jobs or address the issue of farm distress, along with the drug menace. That the Congress is working as a house divided is another problem on his hands.

Interestingly, it is only the campaign of Simranjit Singh Mann that is raising the issue of real federalism to protect the rights of Punjab. “Why should the states getting Punjab waters not pay us the royalty? We are going to the people with real issues that include doing away with caste and religious discrimination,” said Ranjit Singh Cheema who is managing the campaign.

The pamphlets of SAD (Amritsar) carry pictures of Bhimrao Ranji Ambedkar beside those of Simranjit Singh Mann and BAMCEF leader Waman Meshram.

Sangrur is among the most interesting contests on the cards in Punjab. The result here will have a long term impact on state politics in time to come. It will also speak for the rural masses of the volatile Malwa region of the state.