Contradictions Play Out in a Clash of Titans in Hamirpur

A constituency stuffed full of veterans

HIMACHAL PRADESH: On a hot Sunday afternoon, even as Bharatiya Janata Party president Amit Shah was indulging his party’s hypernationalism by raking up the Balakot air strike and the Pulwama terror attack at a rally in the Luhnu Ground in Bilaspur, Himachal Pradesh, barely 300 metres away a young poetess was expressing her concern for the nation. Pratibha Sharma recited the words, “Uth raha hai ek bawandar desh ke andar, Main bada hun main Sikandar baki sab hain mujhse kam.” (There is a tornado rising in the country - I am the greatest, I am Alexander, all the others are less than me.)

This contradiction well describes the poll scenario in the high profile Hamirpur Lok Sabha constituency in Himachal Pradesh, of which the Bilaspur, Una and Hamirpur districts along with the Dehra subdivision of Kangra are the key components. Here it is Anurag Thakur, former chief of the Board of Cricket for Control in India, the son of former chief minister Prem Kumar Dhumal and a three-time BJP Lok Sabha MP, who is pitted against Ram Lal Thakur of the Congress who has been an MLA five times and a state minister thrice.

When the die was cast for the battle, the BJP’s propaganda ministry was successful in projecting it as a cakewalk for Anurag Thakur. But as polling day approaches, so do many contradictions, and Ram Lal Thakur is giving him a run for his money.

While Anurag retains the upper hand in his home district of Hamirpur that has been nurtured well by Dhumal and himself, it is Ram Lal who remains immensely popular in Bilaspur. In fact people living in areas other than Hamirpur have their reservations about Anurag, making for an interesting contest.

With the BJP is trying its best to seek votes in the name of Prime Minister Narendra Modi and make it a Modi versus Congress president Rahul Gandhi battle, voters while silent are not enthused. They are looking at issues on the ground, some of which have remained unresolved for years.

For example, if there is the issue of Pong Dam oustees in Una district, there is the similar issue of Bhakhra Dam oustees in Bilaspur. “In the run up to the state assembly polls in 2017, Modi had also made tall promises about addressing the rehabilitation concerns of Bhakhra oustees at the same venue as Shah’s recent rally. But nothing was done and we have been compelled to approach the Himachal Pradesh High Court. Is it not a joke that we remain where we were left in 1958,” an oustee named S.R.Azad told The Citizen in Bilaspur. 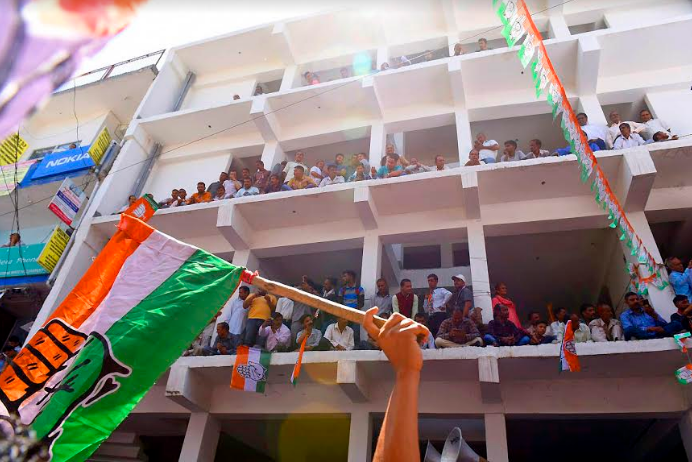 The people of this district nurture several grievances. They point out that very few people in the country are aware of the fact that the princely state of Bilaspur was the last to join the Indian union and that too after getting the status of a C-category state. “When this constituency was being carved out in 1966 we approached the authorities with the plea that it be named the Bilaspur Lok Sabha constituency, as both Una and Hamirpur had been mere tehsils in the Kangra district while Bilaspur had been a ‘C’ category state. But our plea was ignored and we have been left out of many things since then,” said Azad.

People point out that they have been left out and cheated on many counts. They point out that although the process of linking Bilaspur with the railways began in the 1980s, nothing concrete has come of it to date. They sneer that the central government should be more worried about the Dragon Footprint (referring to China) and give importance to taking rail connectivity right up to the Sino-Indian border, than playing up the Yeti Footprint (which a unit of the Indian Army recently said that it had spotted).

People in Bilaspur underline that while the Hydro Engineering College was sanctioned for Bilaspur, its classes are being held in Nagrota Bagwan in Kangra. They accuse Anurag of taking a hockey astroturf pitch sanctioned for the district, to Hamirpur, and say that only with great effort have they now been granted an athletics turf for the sports complex. They say that credit for the sports facility goes entirely to Ram Lal.

Similarly, residents of the Dada Sibba area of Una point to the poor roads and drinking water crisis. “We are so close to Pong Dam and yet we face water scarcity. There is no proper healthcare infrastructure and above all no avenues of employment. What did we get by electing Anurag as MP three times?” asked a resident of Seul village.

But the public response changes when one goes to Hamirpur, as the Dhumal family is credited with the good road network, a well functioning hospital and quality educational institutions like the National Institute of Information Technology, which have all boosted the local economy.

Anurag is often accused of being arrogant and not venturing out of Hamirpur. However, locals say that he learnt his lesson after his father’s defeat in the 2017 assembly polls from the Sultanpur seat, and has started visiting public functions since then.

The Hamirpur Lok Sabha constituency is home to a lot of political heavyweights who sources say have high stakes in the future. Besides the Dhumal and Anurag Thakur duo, the state’s BJP chief Satpal Satti comes from Una in this constituency, as does the home minister Jagat Prakash Nadda, who is credited with bringing an All India Institute of Medical Sciences to Bilaspur.

Sources say a game of one-upmanship is very much on in the BJP as all these leaders have bigger designs in the days to come. Many say that Dhumal’s loss in 2017 had a lot to do with internal strife as he was compelled to campaign across the state while his own constituency was neglected during the campaign. His son Anurag is reportedly taking no chances on this count.

Sources say that a fourth straight victory for Anurag would make him a BJP heavyweight and possibly a contender for the chief minister’s post in future, or that of a union minister if the BJP forms the government, which might not be to the liking of many.

Even in the Congress, former state unit chief Sukhvinder Singh Sukhu and leader of opposition in the state assembly Mukesh Agnihotri comes from the Hamirpur constituency.

Former BJP state unit president and three time MP Suresh Chandel, who was unseated following the ‘cash for query’ scam in 2007, recently joined the Congress giving a new dimension to the contest. He was seeking a ticket from the BJP and later from the Congress. Like Nadda, he too is from Bilaspur. His entry has been a psychological boost for the Congress.

The districts falling under Hamirpur constituency are known for contributing a lot in terms of manpower to the defence and paramilitary forces. Yet the BJP’s Pulwama and Balakot narrative has not caught on much with the masses, who accuse the party of whipping up war hysteria every now and then.

“It is easy for them to talk about an armed engagement with the enemy and to get media personnel in studios in Delhi to whip up war hysteria. They do not know how the families whose wards are in the forces feel about all this. No one wants their son to go to the battlefront and get killed on issues that only serve political interests,” said Surendra Kumar, a retired paramilitary officer.

Himachal Pradesh is one of the few states where the majority of people have not fallen for hate mongering. They continue to believe in peaceful coexistence. That is why there is a visible element of shame when the issue of Kashmiris leaving Hamirpur after the Pulwama attack comes up.

Many symbols suggest that elections are seen here as a contest in a democracy, and not a platform for creating enemies. That may be why both Congress and the BJP flags can be seen fluttering from the same poles at many places.

This reporter could not help but wonder when he came across a small roadside Shiv temple, with a BJP flag, bearing a board advertising a Muslim tailor’s boutique near Ghagas.

When PM Modi was hitting out at the Congress for its “dynastic politics” during his rally in the high profile Mandi constituency, people in neighbouring Hamirpur were cracking jokes on the social media saying that perhaps Modi was indirectly referring to the father-son duo of Dhumal and Anurag.

“It is a close fight. The people have issues like employment, industrial development and health facilities at the back of their mind. At the same time they would like to elect a candidate who is from a party that comes to power at the centre,” pointed out Sushil Pundir, a retired political science teacher.

The BJP might no longer be even referring to its demonetisation or GST “masterstrokes” but the people have not forgotten the fallout. The party is banking heavily on Modi’s name to win a seat that is full of contradictions. A victory for the Congress would be sweeter than sweet as Hamirpur has been a BJP bastion for more than two decades. 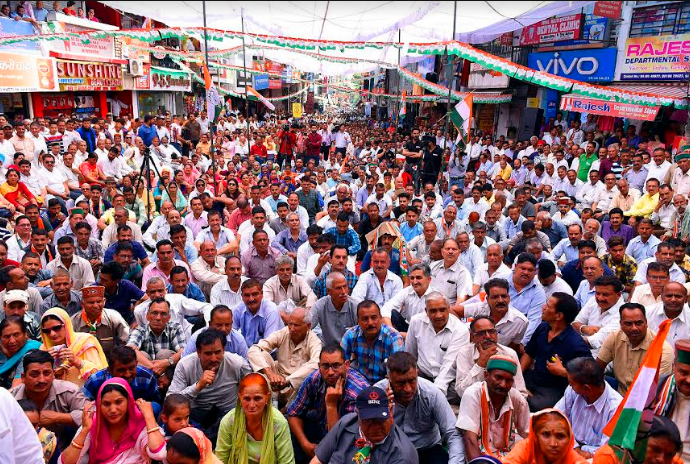 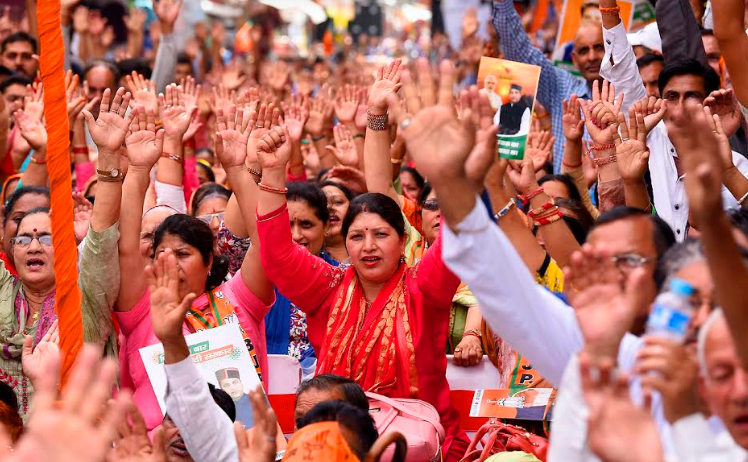