NEW DELHI: Jantar Mantar, the officially designated protest site in Delhi, is teeming with military veterans from the jawans to the generals. The dais is weighed under a large number of ex-servicemen from Punjab who are taking turns to denounce the government and its reluctance to implement the promised One Rank One Pension scheme. Others with wives, and daughters, are sitting on chairs alongside in solidarity to the cause.

Alongside the dais a group of military veterans are on hunger strike. Several persons try and stop the journalists from speaking to them, and others from shaking their hand. As one of the ex-servicemen explained to The Citizen, “speaking takes away their energy, handshakes can give them a viral.” And then he added in exasperation. “but no one is listening” even as a television cameraman pushed by to take a bite.

There is hope again on August 26 fuelled by the expectation that the government will accept the demand that has united military veterans across the country on the anniversary of the 1965 war that is being celebrated as an Indian victory by Prime Minister Narendra Modi and the government. Otherwise it might find itself celebrating the event without the military veterans who participated in the war with Pakistan. 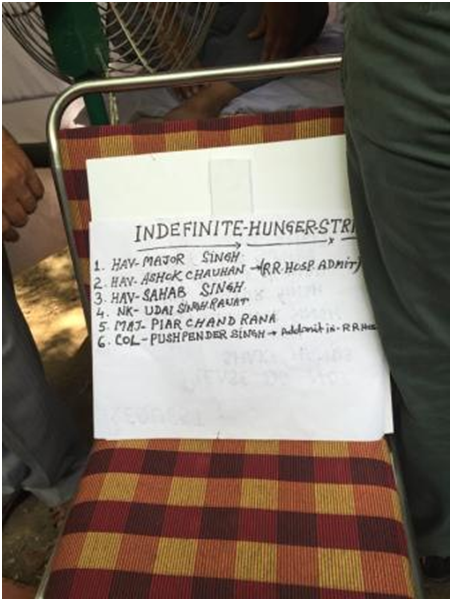 The last couple of days have seen hectic activity, with the government trying to resolve the issue that has kept the veterans on the streets for 73 days now. Another round of talks with seniors in the government, although as yet inconclusive, has brought in some levels of optimism with a Brigadier from the Gurkha regiment saying, “of course they will have to announce it. You know 1965 veterans are sitting here as well, how can the government celebrate a victory without the soldiers who participated in the war?”

How indeed? The government has just about a day to plug the loopholes and make the announcement. A scramble of sorts is visible, with several meetings being held between representatives of both sides. 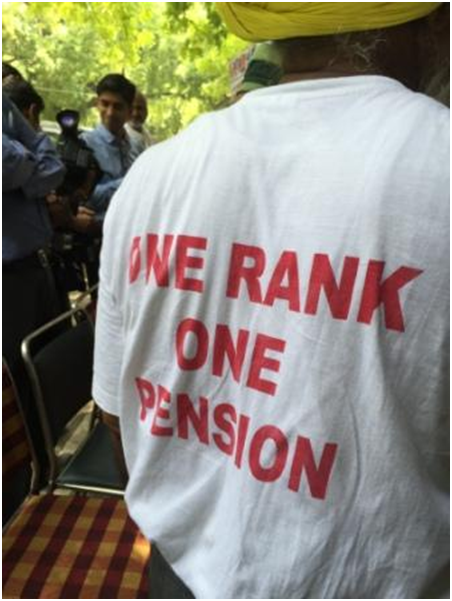 A meeting late Tuesday evening was held at the Union Home Minister Rajnath Singh’s residence with a delegation representing the veterans. Sources told The Citizen that members of the Rashtriya Swayamsevak Sangh were also present. The delegation reportedly returned with the impression that Singh was not fully supportive of their demand either, unless it was extended to include the armed police under his wing.

There are thus, many ex-servicemen at the protest site who are not very hopeful for a convincing breakthrough. They see a clash between two senior Ministers of Defence Manohar Parrikar, and Finance Arun Jaitley who incidentally has become the ‘bad boy’ of this entire controversy. The military veterans across the board are convinced that OROP has been stopped by Jaitley at the instance of the bureaucrats who of course, remain the butt of caustic comments and strong criticism. Emails are being circulated describing Parrikar as a leader favouring the ex-servicemen’s demand, and Jaitley as the vile figure who has ensured that Prime Minister Modi is not able to move forward on this.

The jury is still out on PM Modi’s role, as he has kept silent through it all. His only reference to the issue has been that the government is still committed to OROP. The gathering impression is that Jaitley has stopped the implementation, and as a senior retired officer said, “he is looking for hurdles, not trying to resolve the issue.” The excuse about paucity of funds is rejected in toto by the military veterans as “lame.”

The clock is thus ticking with the 1965 war anniversary now becoming a deadline for both the government and the military veterans. The last deadline of Independence Day came and went, leading to a major escalation of the protest. Several ex-servicemen are now on hunger strike, with at least three being hospitalised as their condition worsened. There is worry both amongst the veterans and the government of the situation turning serious if even one of those on hunger strike falls seriously ill, as the repercussions will be severe. At least 14 ex-military Chiefs have signed statements urging the government to accept and implement the demand.

The government has not been able to work out the finances to accept the OROP demand in toto. At least two retired generals told The Citizen that a dilution will not be acceptable. The inability to sell a diluted acceptance of the demand to the veterans is now holding up the announcement, with no real word whether the August 28 deadline will be met to the satisfaction of both sides.