31 Years And Bhopal Is Still Gasping

NEW DELHI: "We are not expendable. We are not flowers offered at the altar of profit and power. We are dancing flames committed to conquering darkness and to challenging those who threaten the planet and the magic and mystery of life."

Thus spake Rashida Bee, a Bhopal gas tragedy survivor who received the 2004 Goldman Environmental Prize for her relentless voice of resistance against the world’s worst industrial disaster that killed about 12,000 people over-night and affected million others over time.

Thirty-one years have fled with a mere snap of the fingers since that fateful night of December 2-3, 1984, when 40 tonnes of toxic gas (methyl isocyanate) leaked from the Union Carbide factory and maimed the whole Bhopal city deep asleep in a cold wintery night. While the tragedy now universally symbolises the most deadly negligence in multinational enterprise, those who survived are still gasping for justice, risen as phoenix from the rubble of a destroyed city. 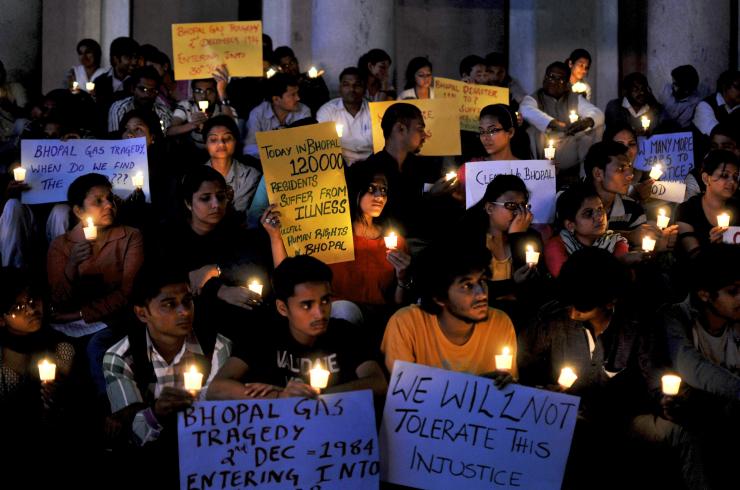 This December 3 marks the 31st anniversary of the 1984 Bhopal Gas Tragedy. To many, Bhopal is an event of the past, something that hit the headlines many years ago, but no longer a matter of concern today, and to some, mostly the affected, each anniversary renews their struggle to counter that notion that Bhopal is still an issue not resolved; Bhopal is a nightmare that is yet to end.

Despite writing letters and sending memorandums by thousands of justice-loving people, activists and intellectuals from across the globe to the higher authorities including US President Barack Obama and Indian Prime Minister Narendra Modi to hosting political demonstrations in the country, the plight of post-tragedy Bhopalis continues to remain unheeded. Approximately 25,000 people have already died as a result of the disaster, while Bhopal is now home to about 120,000 men those are too sick to work. The remaining people are slowly getting consumed by health problems relating to kidneys, eyes, heart and skin. Thousands of Bhopalis are still drinking contaminated water bereft of any alternative. As many as 1 in 25 Bhopali children are born with birth defects, as three long decades have proved insufficient to neutralise the effects of a toxin that mutated and intertwined with DNA of Bhopali people. No one with their heads and hearts in place would contradict with condemning the tragedy as a biggest corporate crime to humanity.

More humiliatingly, the abandoned Union Carbide factory still remains where it was at the time of the disaster, leaching its toxins into the environment in a sly while the American chairman of Union Carbide (now fully owned by Dow Chemical) Warren Anderson escaped to heaven (must be to hell) unpunished after gracefully evading the Indian judicial system; thanks to the rapport he shared with the global political and capital big-wigs. The shielding of Anderson is evident from a June 28, 2012, US court judge Keenan’s judgement, which sided with UCC CEO Warren Anderson in freeing him of any individual liability by saying “He did not personally approve the location of the Bhopal plant.”

Unfolding the past, we could see how the Central government too in 1975 had amended laws to allow the Union Carbide Corporation (UCC) to operate in India in a glaring example of a nefarious corporate manipulation over people’s lives.

On January 1, 1973, India had enacted FERA (Foreign Exchange & Regulation Act) and imposed stringent rules on dealings in foreign exchange and securities. In that scenario, an alarmed UCC, which owned a 60 per cent stake in Union Carbide India, offered to manufacture methyl isocyanate (MIC) in Bhopal, but sought to be exempted from FERA, a request that was granted under "amplified guidelines" in 1975.

A series of leaked WikiLeaks cables stands testimony to how in the US, the Indian government fed well by the UCC India managers had collaborated with US diplomatic authorities to set up UCC’s operations in India. The WikiLeaks cable (dated April 20, 1976) clearly reveals: "As a result of the amendments, the GoI (Government of India) hopefully will be able to make expeditious decisions on the 245 of 855 cases remaining under the FERA. The earlier guidelines had created problems in dealing with the cases of multi-product companies like Union Carbide, whose contribution to Indian industrial developments and exports was vital but could not match the strict criteria under the old guidelines..."

While India is yet to recover from the trauma and aftermath of the Bhopal gas tragedy, the share of the BRICS countries (Brazil, Russia, India, China and South Africa) in the global chemical production grew from 13 per cent to 28 per cent in 2009, and India's chemical production is estimated to grow by 59 per cent in the 2012-2020 period, warns the UN Environment Programme's Global Chemicals Outlook Report (2013). Most importantly, post Fukushima nuclear tragedy in Japan (2011), which killed over 600 people and endangered over 10,000 lives and at a time when industrial pollution is one of the top five causes of death in the world, the estimate is highly disturbing.

While Bhopal has been a strong case of failures in corporate regulation, disaster management, and government response, the most tragic irony is that India is yet to learn any lessons from Bhopal, as it is proudly gearing up to install deadly substandard nuclear facilities in collaboration with the (nuclear) history-sheeter Japan defying every safety and reliability norms, let alone other social and environmental impacts. Setting aside the nuclear debate for another time, in Hyderabad’s Patancheru, toxic effluents are directly discharged into the surrounding fields and water bodies, in Cuddalore, Tamil Nadu, local residents are exposed to poisonous gases emitted from the chemical industries that use poorly maintained plants to manufacture pesticides, pharmaceuticals and bulk chemicals. According to a report by the Energy and Resources Institute released last year, as of February 2009, more than six million tonnes of hazardous waste was reported in India; Gujarat, Andhra Pradesh and Maharashtra being the top three contributors. But who cares…

Too many Bhopals are in the making under our nose, as the amendments proposed in environmental and labour laws by the current Modi government would increase the possibility of the recurrence of Bhopal disaster in the country.

Bhopal should be made a story of collective conscience against appropriation of human lives and nature for profit, and we all have a role to play in it. Many across the world are fighting to fetch Bhopal its deserved justice. From holding public rallies to making films on the tragedy, so many efforts are being made to generate mass awareness and rally support behind the cause to meet its logical end. In 2013, a 365-day relay hunger strike was launched by the Harvard University students and ICJB (International Campaign for Justice in Bhopal - North America) to mark the 30th anniversary of the Bhopal disaster aimed at drawing attention to key responsibilities of the government of cleaning up the contaminated site and surrounding areas, providing medical relief and rehabilitation to all the survivors and certainly, prosecuting the polluter Dow Chemical. Even after so much of struggle for over the past 30 years, "there are over 5.25 lakh such victims who have not been compensated at all. The deaths occurring after 1997 are not being viewed as related to the effect of the gas," said an activist adding that the victims should be paid Rs 30 lakh as compensation.

So, it is evident that the judiciary failed the Bhopal victims just as much as the government and us. But strengthened by protracted struggle for justice, Bhopal does not cry anymore. It still fights for healthy lives for its citizens, and relief and rehabilitation for its tragedy victims and survivors, something more than just free treatment at hospitals and a meager compensation of 25,000 rupees per victim that the government paid (not many did get it even) as an estimated loss and went away.

With December being the anniversary month, this year too we will certainly witness yet another series of candle light vigils and spectacular forms of non-violent protests demanding justice for Bhopal on virtual to real world, only to be faded a bit later. Thousands of such candles burnt over decades have miserably failed to rescue Bhopal from darkness.

The Michigan-based Dow Chemical, a multibillion-dollar corporation, spends billions in lobbying the US government and cleaning their public image every year, and with mounting pressure from people and organisations around the world, it would be therefore interesting to see if the Obama-Modi bonhomie could manage to re-open the ‘closed case’ of Bhopal by dragging such criminal corporation to the International Criminal Court and bring justice in this extremely grave human rights issue. And we must ask, why India would not be compensated, if the US could demand $20 billion from BP following the Gulf Oil Spill in the recent past. With a change of guard at the Centre, the Bhopal gas tragedy victims have every rights to see 'acche din' (better times) now. Or never…