SHAKUR BASTI: A DAY AFTER THE DEMOLITION

NEW DELHI: Shakur Basti residents sit amidst what had been their homes, with their scattered belongings, in the bitter cold. They have nowhere to go to, with the women particularly distraught about the sudden end to life as they had known it.

A Delhi High Court bench of Justices S Muralidhar and Vibhu Bakhru hearing a PIL filed by Ajay Maken of the Congress, spoke out for the slum dwellers, “What was the tearing hurry to demolish in December? …You really don’t care about the people, you just want to remove them.”

The Judges, in a clear admonishment to the Railways further asked, “Are they safe now? You have forced them to suffer and shiver in the cold. Every minute that they sped out in the cold counts.” The Railways had said just after the demolition that it was not responsible for the rehabilitation of the slum dwellers as they were squatting on government land! 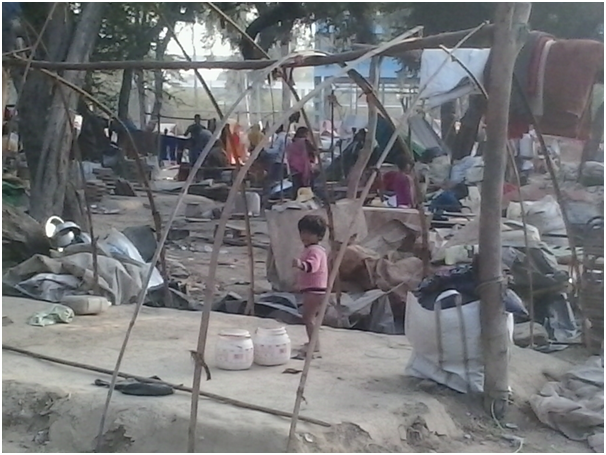 This is not the first time that these slums have been bulldozed by the Railways. Speaking to The Citizen, 55 year old Lajjaram said that the same hutments had been razed one and half to two years back, and the residents most of whom returned to set up the tenements again, have been subjected to periodic harassment from the Railways. The government, he said, has refused to allocate them alternative land.

“We have been living here for the last 18-20 years and still haven’t ever been allowed to build proper huts for ourselves. The railway has always been on our back. There had been no instance of fighting and drunkenness as has been said about the place,” he said.

The Shakur Basti slum dwellers are mainly from Uttar Pradesh and Bihar Invisible boundary lines demarcate the areas between the two ‘states’ with a certain rivalry visible.“The Biharis have taken over all the (relief) tents don’t allow us near them. Even when the food was being distributed they took all of it leaving nothing for us,” said Lajjaram’s wife.,Mohammed Aurangzeb, a 25 year old ‘pan-bidi’ seller who had been living there for the last 10 years and is from Patna said that there is no such rivalry “We all live together and mind our own business.” 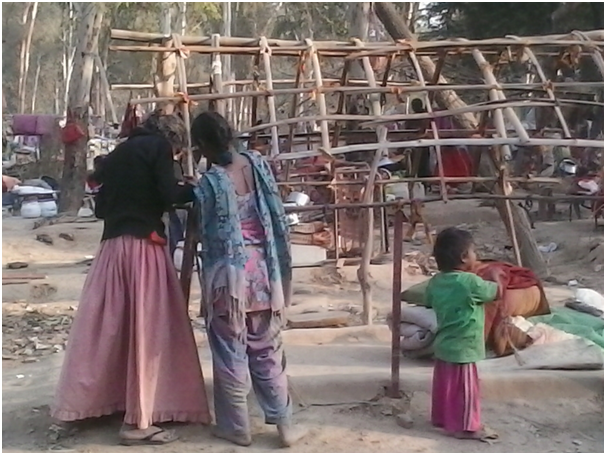 Lajjaram was upbeat about Rahul Gandhi’s visit the same morning and expressed hope that something will be done for them now at last on a permanent basis. “Poor guy, he was all begrimed in dust. He took a complete tour of the area and people hounded him badly. It’s not easy here walking without getting very dirty with all that cement and dust on the road and everywhere else,” he said.

These slums are located on the margins of the railway tracks on one side, the Ring Road on the other amidst a tangle of dense forestry and stagnant pools of dirty water. The backdrop of the cement factory ensures a cover of dust. The tenements are scattered and short cuts from one to the other is a path full of human waste. This correspondent was advised to take the dusty longish route to visit another cluster of huts, or where they once stood.Right opposite the railway tracks lay the rubble of a cluster of razed tenements, with a bulldozer still working noisily.“No, it’s not here to demolish more huts but to make a hole so that the excreta can be dumped there,”said a young boy standing nearby.

Manju, whose house also was brought down on Saturday, stands behind a tin-sheet with a pile of clothes resting on the top-edge of it, the utensils arranged on top of one another, and clueless about her next step. 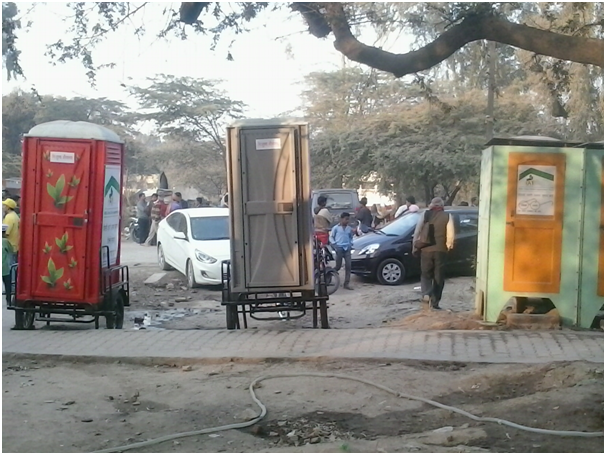 ‘”We have been living here for the last five and half years and have nowhere to go now. I press clothes in ‘gali number 2’ in the colony. My husband too works as a pressman. Now we don’t know what we will do,” said the mother of four young kids. She half-smiled when I asked her if she wasn’t too new to the area to claim a permanent address there. “No, earlier we lived on the other side of the tracks and moved here only after when the railways demolished slums on that side. My brother-in-law (elder brother of her husband) has been living here for close to 20 years,” she replied.

When asked if liquor is sold there illegally as is common with slums, Lajjaram’s wife said ,”not here but it can be bought from a slum a little further off.”

Relief work is slow. Just about a few tents are up, far too few for those displaced; a kitchen has started functioning to provide food.‘We have marked eight points throughout the area where the food and blankets have been distributed in steps. We are going to distribute more food as soon as it’s prepared and the kitchen is constantly at work since the demolition happened,” said AAP member Mithilesh Pathak to The Citizen.