NEW DELHI: 2015 has been a big year for Indian Prime Minister Narendra Modi. A range of high profile visits to the UK, US, UAE, Germany, Canada… the list goes on; huge rockstar-esque addressed to massive, cheering crowds; a commitment toward a Digital India; ratification from big business honchos; and even a humbling loss in an important state election… 2015 has definitely been an eventful year.

Here’s a look at the year PM Modi has had: 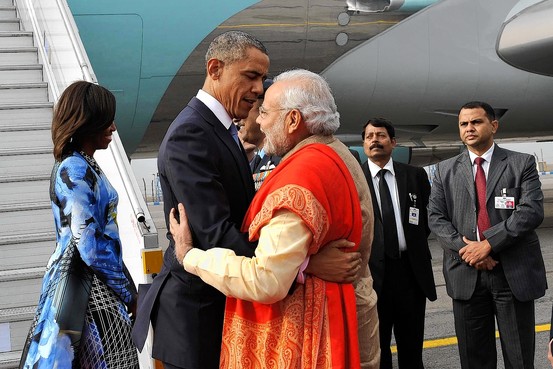 In January, US President Barack Obama visited India… the first visit by a US President to the country. The US President was the chief guest for the Republic Day parade, the two countries renewed the Defence Framework Agreement, made a breakthrough of sorts of the Civilian Nuclear Deal and most importantly… hugged it out.

PM Modi’s visit to Canada and this speech

The Indian PM visited Canada in April, and gave a great speech in Toronto as part of the visit. PM Modi came up with a novel new renewable energy -- “weed” energy on the spot.

Also in April, PM Modi arrived in Germany, where he invited German Chancellor Angela Merkel to visit Maharashtra. The two leaders inaugurated the Indian Pavilion at the India-German business summit and issued a joint statement, but the visit made for some awkwardness as a video emerged showing the Indian PM reaching out for Merkel’s hand, only to be left hanging. Ouch!

India gets inducted as Full Member of Shanghai Cooperation Organisation 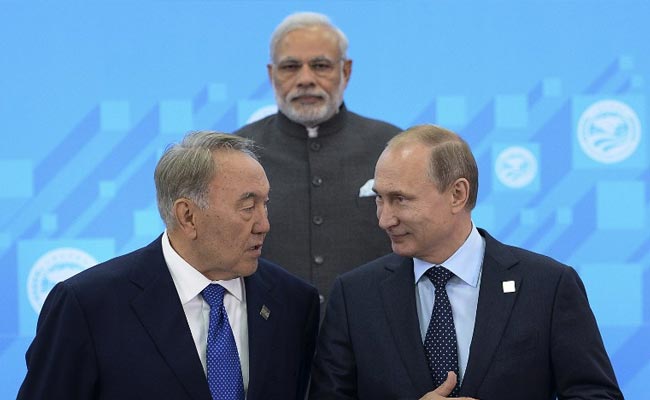 In July, India was accepted as a full member of the Shanghai Cooperation Organisation (SCO), a six-member regional grouping including China and Russia, after having held observer status for 10 years. Judging by the photo, however, it seems like the inclusion was more theoretical than practical, as PM Modi lonesomely looks on.

PM Modi’s visit to the UAE 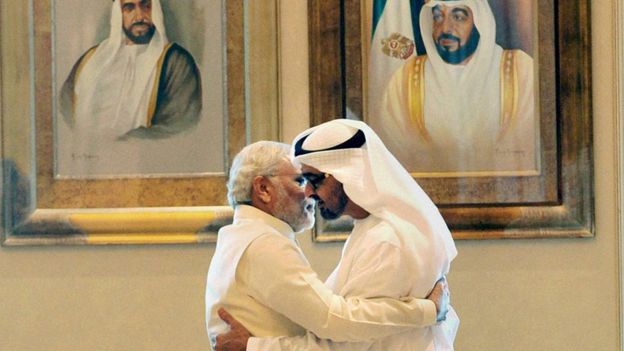 In August, PM Modi visited the UAE, with the visit scoring big on four fronts -- terror, trade, outreach to the blue-collared Indian expatriate community and a bro-mance with emirati royalty. Pictured above, the PM embraces the Crown Prince of UAE Sheikh Mohammed bin Zayed Al Nahyan.

The meeting with Mark Zuckerberg

In September, PM Modi met Facebook CEO Mark Zuckerberg as the two leaders reiterated their support for a “Digital India.” The fact that the meeting was PM Modi’s for the taking is evinced in the above video that shows the Indian Prime Minister pushing Zuckerberg aside in an attempt to be in full view of photographers. 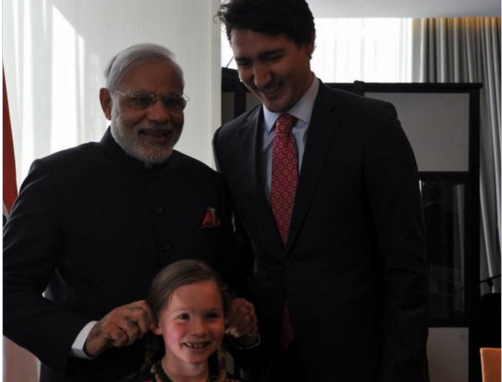 In October, PM Modi was seen with the new Canadian Prime Minister Justin Trudeau, and Trudeau’s daughter Ella-Grace Margaret. “It was also great meeting your daughter, whom you had woken up early that day,” PM Modi tweeted, whilst pulling the little girl’s ears.

This is not the first time PM Modi has made a child smile. See for yourself: 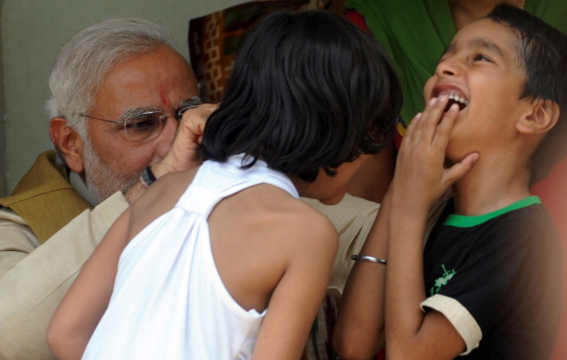 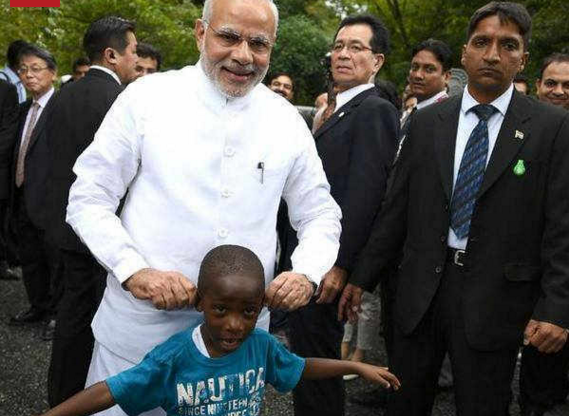 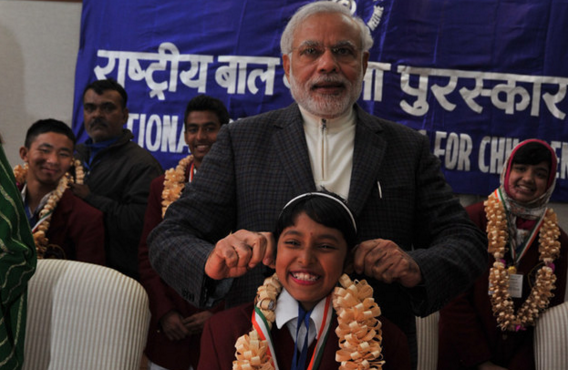 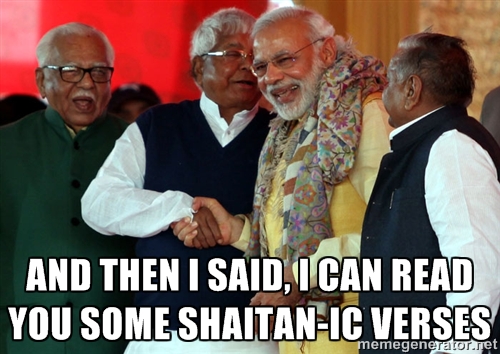 A year is not complete without some disappointment, and that for PM Modi came in the form of the Bihar elections in November, when the BJP lost to the Mahagatabandhan. The memes that flooded the internet may have just hurt a lot more than the defeat itself...

PM Modi’s visit to the UK 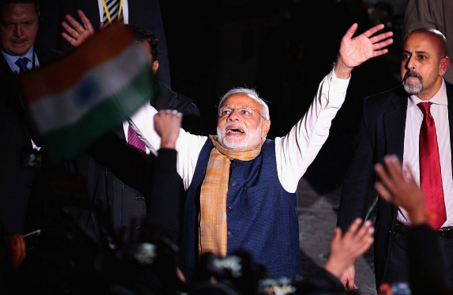 In November, PM Modi made a visit to the United Kingdom. The PM met British counterpart David Cameron and the Queen before making his way to Wembley Stadium … which, judging by his excitement in the above photograph, was clearly his favourite part of the trip. Calm down Sir! 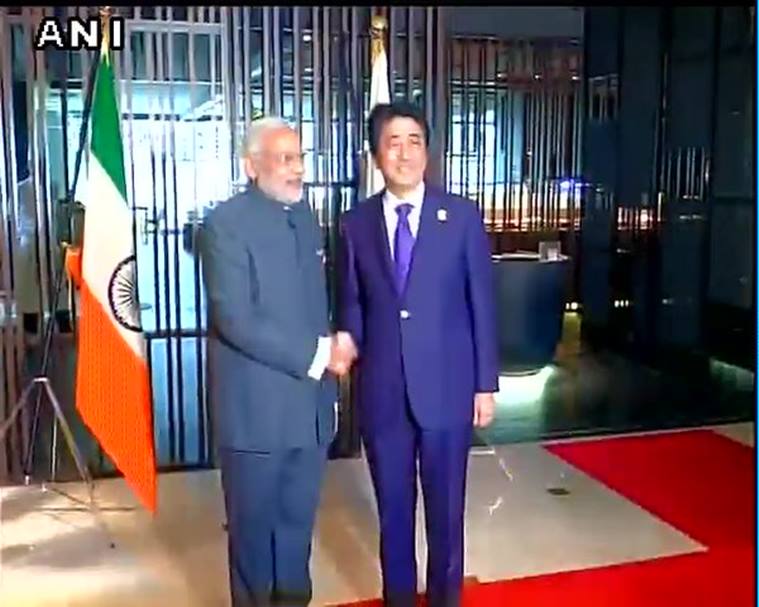 Also in November, PM Modi attended the ASEAN summit, appearing in a photo with Japanese PM Shinzo Abe and an inverted Indian flag. The PIB however, chose to use a photo with the flag correctly displayed, as if the bungle never happened. 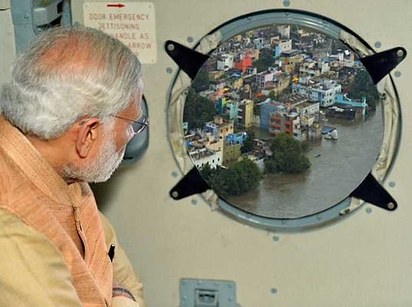 The survey of the damage caused by the Chennai Floods

PM Modi ended the year with a trip to Chennai, where he carefully surveyed the damage caused by the devastating floods. In a photo that went viral, the PM is seen peering out of a window with inundated Chennai far too clearly visible. Unfortunately for the Indian PM, the photo-op backfired as it turned out that it was a photoshopped image, with the Press Information Bureau becoming the internet’s whipping boy of the month. 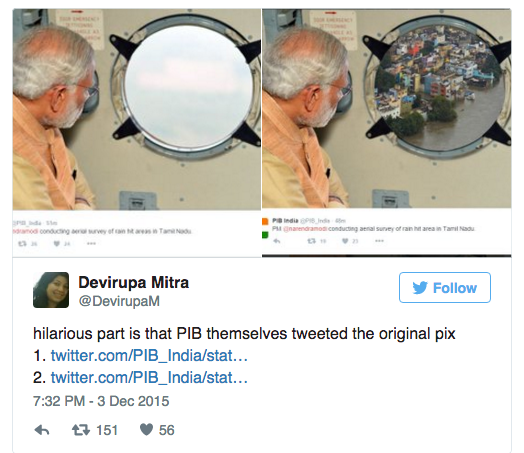 All in good humour, of course. 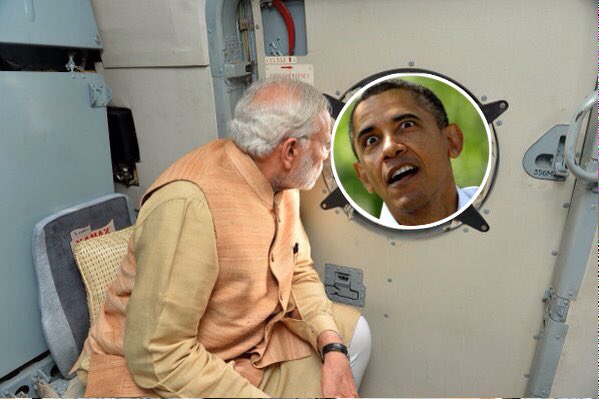 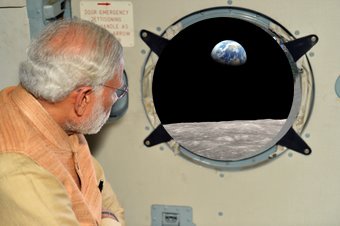 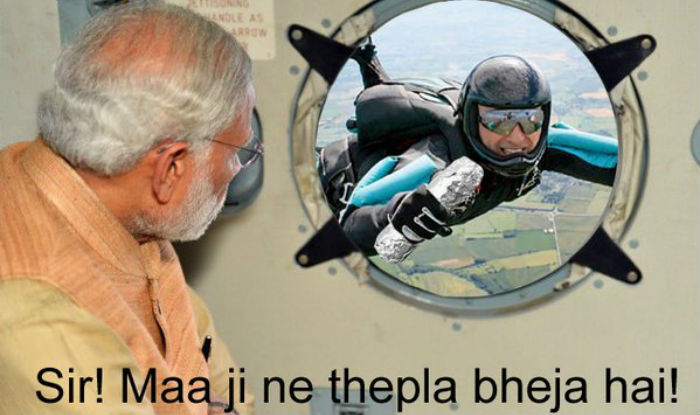 In December, PM Modi made his last international trip of 2015 to Russia. A video showed the Indian PM walking off while the Indian national anthem was playing, only to be pulled back by a Russian protocol officer. The Prime Minister responded to a gesture by another Russian officer and started walking to inspect the guard of honour upon his arrival at Moscow. This was just as the Russians were playing the Indian national anthem. Quite oblivious to the fact that respect to the anthem required a stationary salute, PM Modi started walking. The said Russian official rushed up behind him, caught his arm, and almost pulled him back to the original position with the clear message that the Prime Minister should stay in place in respect for his country’s national anthem.