Union Minister Bandaru Dattatreya who wrote the letter of intolerance

NEW DELHI: Five Dalit students were targeted for several months by the University authorities, the central government and the local ABVP for weeks until finally the lid burst with the suicide of PhD scholar Rohith Vemula who could not withstand it any more. The harAssment was sparked off by a letter by Union Minister of State for Labour Bandaru Dattatraya on August 11 to the HRD Minister Smriti Irani.

As you are aware I represent Secunderabad in Parliament which constitutes the major part of Hyderabad. Hyderabad University, a central University located in Hyderabad, has in the recent past become a den of casteist, extremist and anti-national politics. This could be visualised from the fact that when Yakub Menon was hanged, a dominant students union, Ambedkar Students Association, has held protests against the execution. When Shri Shushil Kumar, president ABVP, in the campus protested against this he was manhandled and as a result he was admitted in the hospital. What is more tragic is that the University administration has become a mute spectator to such events. I am also enclosing a few details to buttress my point…..”

And it is from this date that the harassment started. The five Dalit scholars were singled out, and faced enquiries, threats and persecution that led them to be ‘expelled’ from the hostel, without access to the university facilities except basic classes. Sources said that the emboldened ABVP made them a target, and for weeks since they have despaired of getting justice in the University. 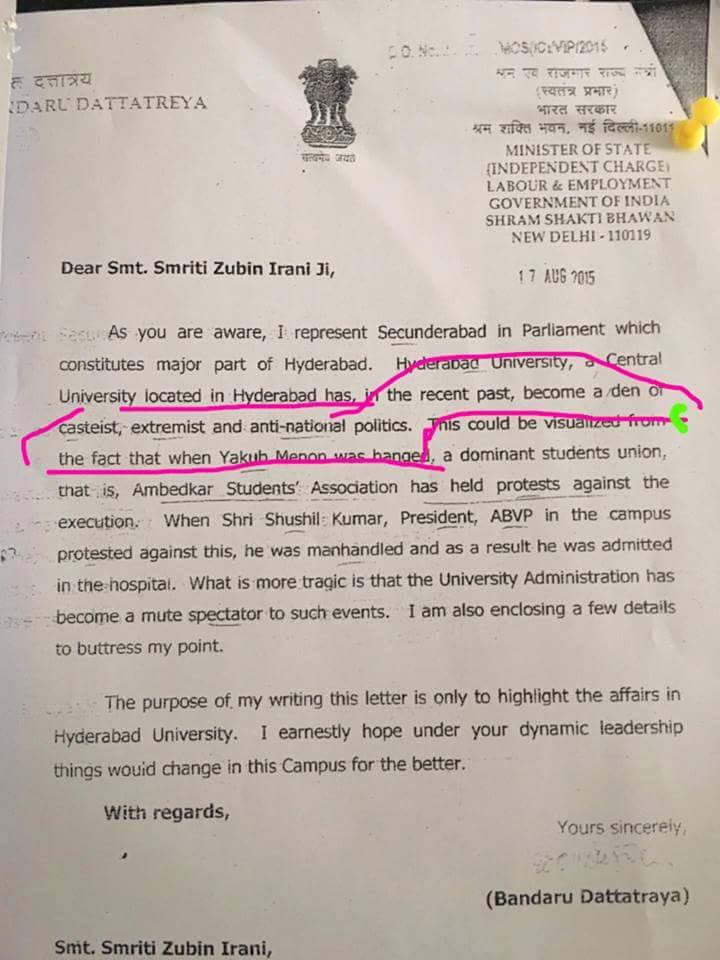 Action, however, had even preceded the letter that was just a formal cover for what was then made official. From July the University stopped paying Rohith the monthly stipend of Rs 25,000 with students alleging that he was targeted for raising important issues under the banner of the Ambedkar Students Association that the Minister, in his intolerance, had dubbed anti-national.

Timeline leading to the suicide follows a pattern:

1. In July the University stops the stipend;

2. On August 5, University sets up enquiry against Rohith and other students, two days after the alleged assault on Kumar;

3. Kumar goes on to change his story and claim that he was hospitalised;

4. On August 11, the Minister writes the above letter using derogatory language;

5. University moves into a series of flip flops, caught between pressure from the government on the one side, and the facts of the case on the other;

6. In September, the University succumbs to government pressure, and suspends the five Dalit scholars;

7. In December, despite enquiries and facts to the contrary, the University upholds its decision;

8. On January 3, the five were evicted from the hostel rooms and took refuge in a tent on the campus;

9. On Sunday, January 17 Rohith clearly despairing, without money and recourse, took his life leaving behind a suicide note that reflects the pain he had undergone.

The students are up in arms, the government is now fast retracting to take action against those directly responsible for the targeting of the five students. But the damage has been done, and the anger has spread through the country with political parties also demanding the sacking of the concerned Minister. And the local BJP MLC who has also been very active in pressuring the University authorities and using the ABVP to further mount pressure inside the Hyderabad Central University campus. As well as the University Vice Chancellor who has been named as an active participant in the harassment of the five rusticated students.

Dattatreya started his career as a pracharak with teh Rashtriya Swayamsevak Sangh. He joined the BJP later.