NEW DELHI: It was not a coincidence that the Delhi police reserved its brutality for a students demonstration outside the RSS headquarters in a clear message that protest against the mentor organisation will not be allowed. The video clip released by Chief Minister Arvind Kejriwal also shows men in plain clothes---students allege RSS workers---who joined the police in beating up the girls and boys at the spot.

The video has gone viral but what the government should be worried about, but does not seem to be judging from the comments of PM Modi’s declared supporters on the social media and his own blank silence, is the viral content of the anger against the central government that has penetrated most University campuses across India.

The charge that the Modi government is anti-student is sticking, with this attack on Martyrs Day in the capital of India capturing the viciousness of policy and approach. Political leaders Rahul Gandhi and Kejriwal have spoken out against the attack, that was barbaric and clearly under instructions from the top. It was a deliberate shift by the police to violence, with at the one moment the students walking on shouting slogans and in the next under brutal attack.

The BJP/RSS made a great deal about the youth vote that PM Modi had secured during the Lok Sabha collections with his promise of employment, opportunities and empowerment. This came a cropper in that the promises gathered dust, and Bihar was a clear demonstration that the same youth that had reposed faith in the BJP had shifted out of a realisation that this was not the answer to their problems.

There is a distinct pattern that has emerged over the two years of the Modi government insofar as campuses and students are concerned. It has to do with the RSS/BJP focus on education, of capturing the hearts and the minds of the youth, and moving to re-write text books and history as part of this larger initiative. Students, thus, become very important and dissent becomes the red rag that needs to be muzzled at any cost as part of an undeclared plan to ‘sanitise’ campuses. ABVP, the students wing of the RSS/BJP to be strengthened and activised where it does have a presence is a corollary of the same.

Events since 2014 have pointed to this. In fact almost immediately after coming to power, Kerala was targeted in that first a Principal and six students of a polytechnic at Kunnamkulam were arrested for projecting PM Modi as a “negative face” in its campus magazine. The protest at that time was muted as the country was still digesting the Lok Sabha elections. So this was followed almost immediately by the arrest of a Principal and 11 students of Sree Krishnan college at Guruvayur after its campus magainze was found to have used "objectionable and unsavoury" language against PM Modi, in the guise of a cross-word puzzle!

Modi govt (government) seems to be at war with students all across,” Kejriwal tweeted.

The government student policy as it has emerged over the past two years with more high profile campuses being hit is:

1. Stifle dissent through administrative action. Arrests, police violence, expulsion being the weapons to be used ‘strategically’

2. Strengthen the ABVP in the campuses by extending full support to its cadres

3. Back off if matters get out of control, but ensure the message has gone through: dissent will not be tolerated

4. Sanitise the campuses of dissent, gradually but systematically.

A year after PM Modi came to power the attack on the students moved into the realm of ‘intolerance’ with relatively smaller isolated incidents blowing into the larger, headline catching ban on a students group for criticising PM Modi and his policies. This ban was imposed by no less an institute than the Indian Institute of Technology- Madras end May and led to widespread protests by students in support of their colleagues.

Similar to the recent developments in Hyderabad that compelled student Rohith Vemula to commit suicide, the Ministry of Human Resource Development led by Minister Smriti Irani stepped in enquire into an “anonymous complaint” about the “activities” of the Ambedkar Periyar Study Circle (APSC) on the IIT campus. The complainant had drawn attention to a pamphlet distributed by APSC that had been critical of PM Modi and his government’s policies. The criticism was against the ban on cow slaughter and the use of Hindi.

The IIT authorities felt the pressure from the Ministry that wrote to the Director about the “serious complaints” and asked “that comments of the institute” be sent at the the earliest. Within a week, on May 24 to be precise IIT administration moved against the students group sending them a letter that the APSC had been “de-recognised.” 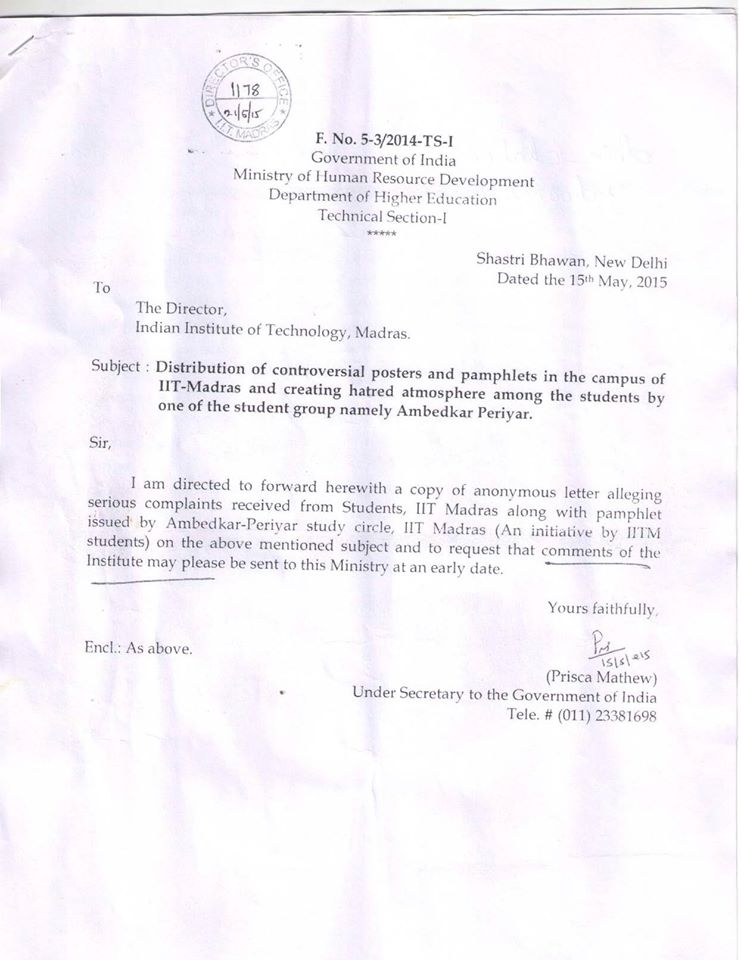 The students in a written response made several valid points. The Citizen is reproducing excerpts from the lengthy rejoinder by the students as it brings out the politics behind the attack on the students across India

1.It has been alleged that we have spread hatred against the Modi government and a copy of our pamphlet on the occasion of Ambedkar Jayanti was enclosed. We do not see any merit in such a statement. We stand by our opinions. Yes, we were very critical of the government. However, we do not understand how dissent and criticism of the government’s policy is akin to “spreading hatred”. If any person professing an anti-establishment view is accused of engaging in “controversial” activities and all dissent is stifled, wouldn’t that be a violation of our constitutionally guaranteed rights to freely express ourselves?

2. We have been accused of spreading hatred between SC-ST and the Hindus and vitiating the atmosphere of the institute. We are surprised and slightly amused. Are SC, ST not part of the so called ‘Hindus’? How MHRD and IITM is perceiving such a venomous anonymous mail with full of hatred towards the SC, ST and Ambedkar? Are we the one who polarise the students or they are the one who think IITM is their own base to propagate against the interest of SC, ST, OBC who are the majority in our Society? Rather our organization is engaged in propagating Ambedkar and Periyar thoughts, in helping depressed castes and the caste Hindus to realize the evilness of caste based discrimination taking place in modern India and expose the ideology functioning behind such discrimination. When we talk about the hierarchical caste structure existing in Indian Society, inevitably we end up in talking about the present pathetic condition of peasants and labours.

3. The complainant has taken exception to one of our meetings which dealt with an MHRD circular regarding vegetarian and non-vegetarian mess halls. We do not understand how anybody’s sentiments could have been hurt when the entire discussion was about the right of every individual to decide what they can eat. This meeting could be seen as trivial when compared to the meetings on much larger issues. However, the complaint against this meeting indicates how unsparing the dominant establishment has become when it comes to stifling dissent. If such a trivial freedom such as being able to eat meat in the mess halls is seen as dangerous, then the continued existence of our study group becomes all the more important.

The agitation spread to other campuses, protests were held by students, and finally the authorities had to give in an reinstate APSC within 10 days of the order.

The next protest to hit the headlines was last year at the Film and Television Institute of India, Pune against the appointment of RSS functionaries in top positions. Here the war was full blown with the government refusing to budge and the students going on hunger strike, with protests again breaking out in “empathy” for the FTII boys and girls who stood out against the might of the government for nearly five months before finally having to call off the strike to go back to their studies and their lives. Gajendra Chauhan associated with the BJP remains in office as the Chairperson of the Institute despite the protest by the students, faculty, filmmakers concerned about the future of FTII.In fact, even BJP linked actors had questioned his credentials at the time.

Despite the ‘no results’ this protest also reverberated through the campuses, with students holding protests in support. But Rohith Vemula’s suicide in the Hyderabad Central University has triggered off a storm of protest that has still to subside. The students attacked outside the RSS office on January30 were demanding justice for him, and protesting against his death. Here too the pattern cited above was visible with the HRD Ministry intervening directly for action against Vemula and other students; and pressurising the University authorities to expel the Dalit boys.

And why? Ostensibly for ‘attacking’ an ABVP leader who had accosted them for protesting against the hanging of Yakub Memon. As the students had explained this was part of the larger protest against capital punishment and had little to do with specifics. The ABVP provided the opportunity, the central government stepped in with repeated letters for action, the University authorities dependent on grants succumbed and the rest is history. Vemula’s suicide was not part of the ‘plan’ and has triggered off a storm of protest that has spilt outside the campuses on to the streets.

The government has also established a pattern of response:

Silence broken only if the protest continue by a press conference, a statement or a visit by BJP leaders to the spot;

Vilification campaign to be launched simultaneously such as “Vemula was not a Dalit” questioning the acknowledged credentials of students and organisations;

Kejriwal is perhaps not far wrong when he tweeted, “Modi govt (government) seems to be at war with students all across.”

Some recent images of students protesting against government ‘repression’: 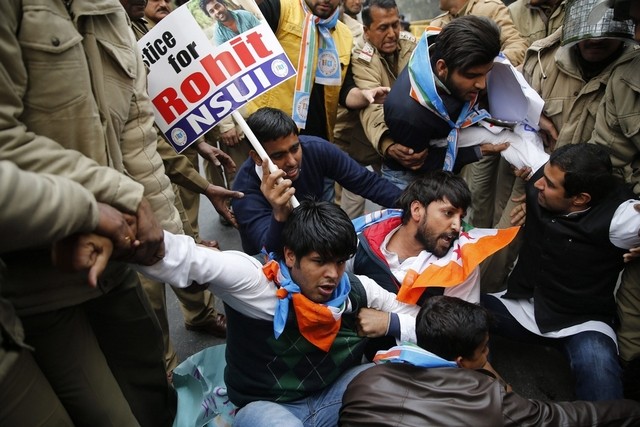 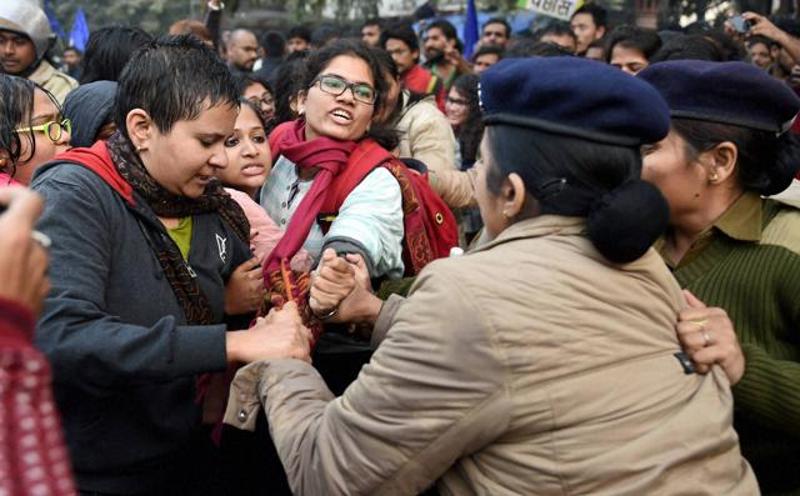 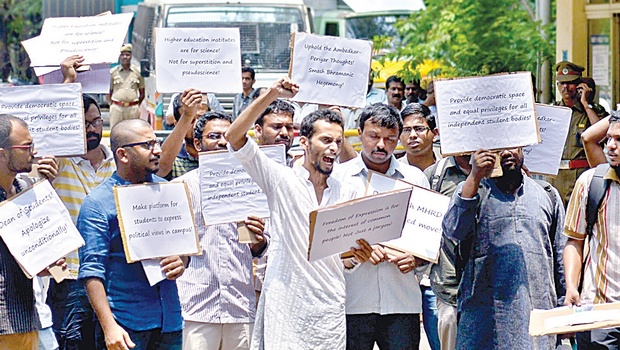 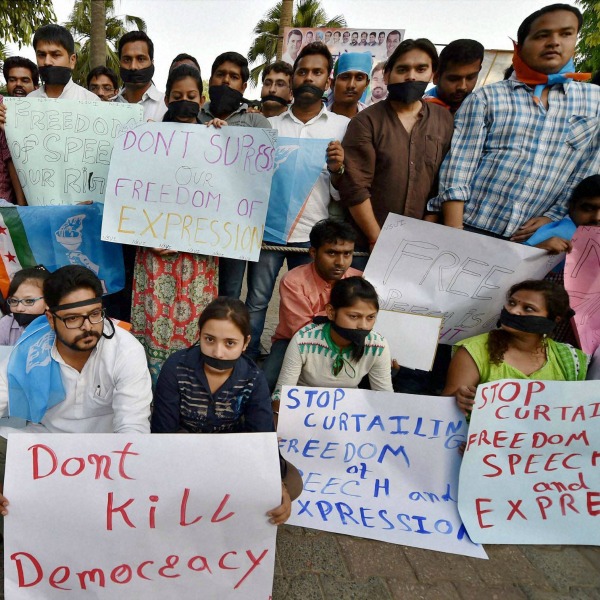 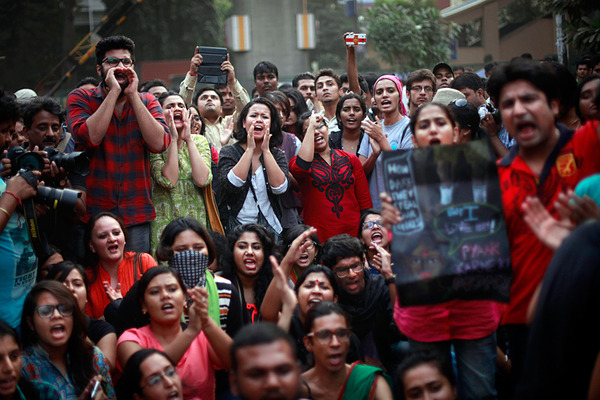