MASTERFUL ORATORY, BUT WHERE WAS THE SUBSTANCE?

NEW DELHI: The Telegraph, a newspaper started in 1982 by the Ananda Bazaar Patrika group with MJ Akbar as its Editor, made waves at that time by setting a new standard of field reporting. Although published from Kolkata, The Telegraph made waves in New Delhi being noticed, commented on and acted upon as it not only questioned the establishment with the irreverence of good journalism, but it also brought in excellent reportage from the field. Journalists were sent out to cover all conflict areas during the violent decade of the 1980’s from the violence in Assam, to Punjab, to Jammu and Kashmir, to the communal violence in north Indian states.

For the last several years The Telegraph sank into the journalistic morass of the usual, but seems to have moved out of the routine with a new makover very visible in its unusual headlines that have made it again a talking point in journalistic and political circles. The Citizen carries some of these unusual, and striking headlines that are bold and say far more than a full volley of words at times. Under Akbar the newspaper was known for its headlines, but the makeover now is even more unusual, in the format and the style as well as what it wants to convey through its lead story. 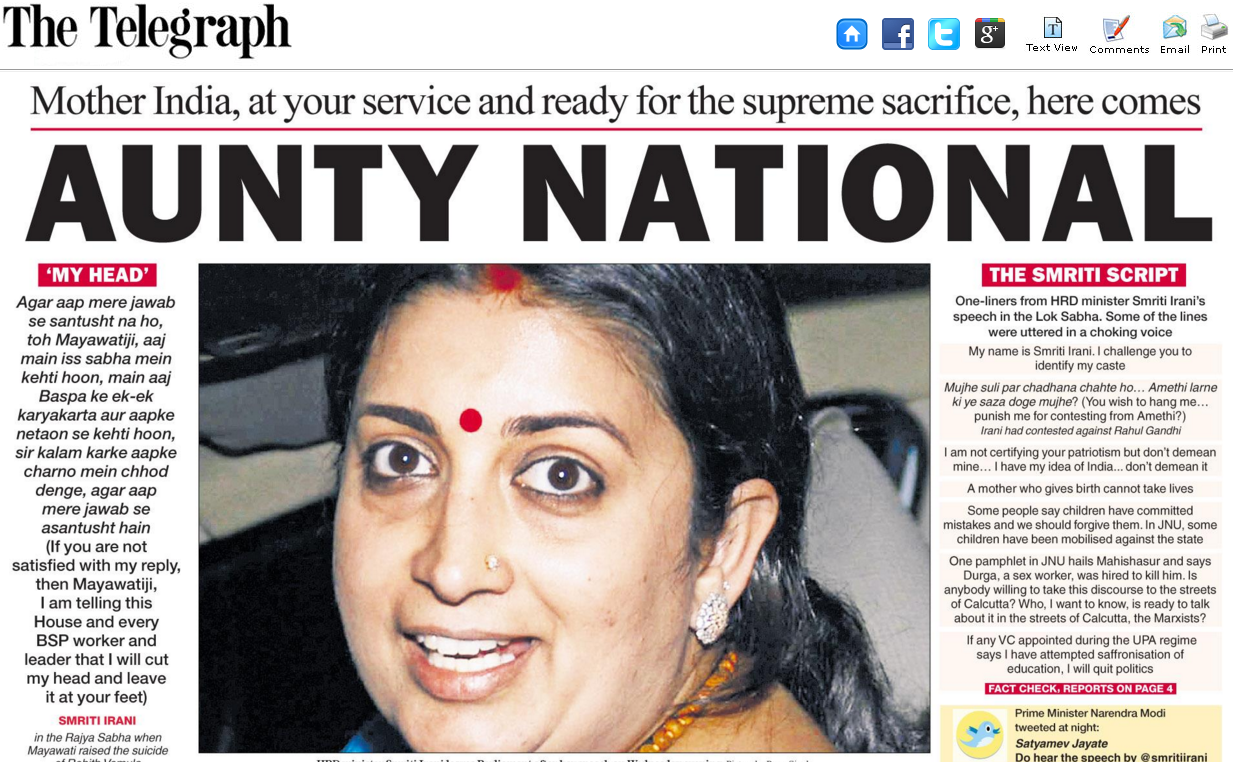 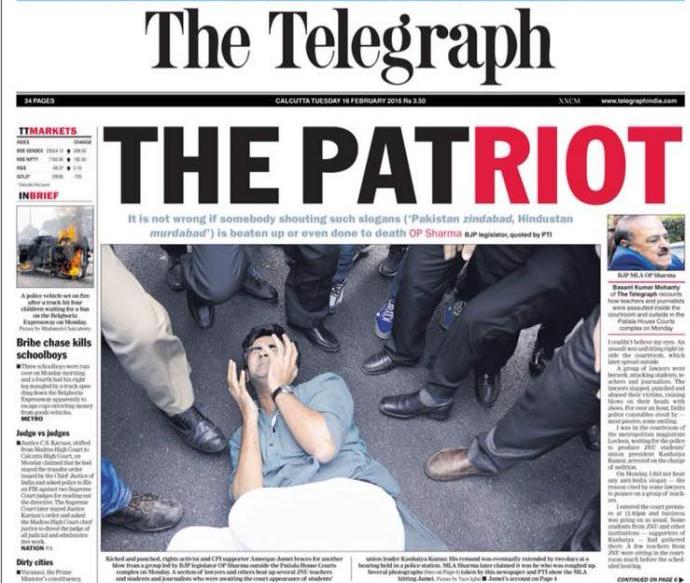 Human Resource Development Minister Smriti Irani went into an emotional outburst in the Lok Sabha on Wednesday while replying to the discussion on the JNU and Hyderabad Central University case. She was almost screaming at times, gesticulation furiously, with the voice being modulated to emphasise points while the House watched in mesmerised fascination. And Home Minister Rajnath Singh stood up to congratulate her for an excellent speech, and later Prime Minister Narendra Modi tweeted saying that everyone should watch the videos of her speech.

But since Lok Sabha is not television, it becomes essential to look at the substance of what the HRD Minister said. She set the tone with her first sentences, combative, assertive, speaking directly to the Opposition benches and not through the Speaker: “Listen to what I have to say. You accuse us of being intolerant, be tolerant. I am giving my answer. Or do I claim to be a victim of my circumstances and say that I am married to a micro-minority family. I am a woman, and hence you did not allow me to speak in this House. Do not play politics with me. Those seeking response on an issue are specifically the ones who ask for personal favours, for example, to get their kids' admission in Kendriya Vidyalaya.”

The passion did disguise the absence of facts. The specific charge of the Opposition centred on: 1. the letter sent by BJP MP Dattatreya to the HRD Minister urging central intervention in the university using the words casteist, extremist, anti-national to describe the students and the activities therein; 2. five letters by the Ministry to the HCU authorities to take action against concerned students; 3. the suspension of five Dalit students, their expulsion from the hostels, the continuous taunts and harassment by the ABVP and others in the campus that was recorded by Rohith Vemula in poetic and more philosophical references; and finally his suicide when he could take it no more and said that his birth itself was a “fatal accident.”

There was no reference to all this in the speech, no specific refutal, no clarification. Instead Irani berated political parties,with:

“Political parties are busy trying to use the death of a child [Rohith Vemula] as a political weapon.

The committee which suspended Dalit scholar Rohith Vemula was not constituted by our government, but by the UPA regime.

I looked at the case as the death of a child and not as a death of a Dalit.

My name is Smriti Irani. I challenge you to identify my caste.

I am enraged by the manner in which a child's death (Rohith Vemula) is being used as a political weapon.

I am taking it personally.”

She referred at some length to a letter by Congress leader Hanumantha Rao that she said she had forwarded as well to the University, but she did not point to the stark contrast between the two letters, Raos raising concern about increasing Dalit suicides in HCU and Dattatreya’s demanding action against the Ambedkar Students Association as being extremist and anti-national. And it was on the basis of the last that the Dalit boys were hounded and victimised. And Rohith Vemula died with protests across the country uniting the Opposition in Parliament.

Interestingly The Telegraph in a fact check of Irani’s speech, where the highpoints were reserved for JNU also reported:

“Irani said: “The internal committee of JNU, which includes teachers, the rector of the university... — and we didn’t appoint any of them — concluded that these students were guilty prima facie, and suspended them for the period of the inquiry.”

Fact check: The university’s internal committee, which was appointed by JNU’s new vice-chancellor, is facing criticism because it suspended the students without giving them a hearing, and within a day.
rani referred to celebrations of Mahishasur — the demon slayed by Goddess Durga — in JNU, and wondered whether that would be tolerated in Calcutta.

Fact check: The “demon” is celebrated in many parts of southern India, and some scholars have suggested his popular, dark-skinned depiction in contrast to the fair-skinned Durga is a pointer to an Aryan-Dravidian divide. Mysore, Karnataka’s second-largest city, is an anglicised version of Mahishuru — which means the “abode of Mahishasura” in Kannada.” 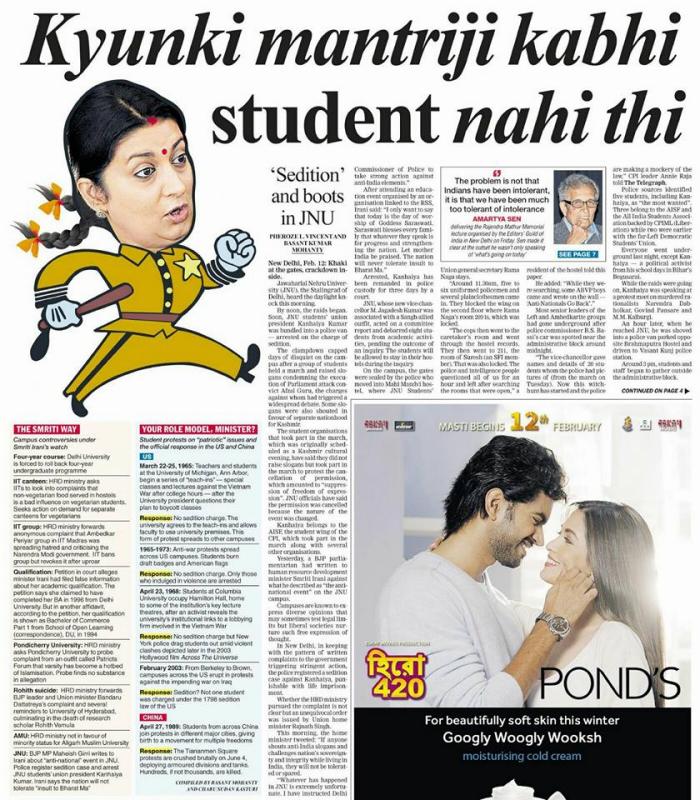