MNREGA And The Budget: Highest is the New Low

NEW DELHI: In the Union Budget for 2016-17, the finance minister Arun Jaitley announced an allocation of Rs. 38,500 crore for providing employment under Mahatma Gandhi National Rural Employment Guarantee Act (MNREGA). Most of the media talked about what a big push this is for the rural employment and the rural poor. But the reality is that in this Budget, as under the previous BJP budgets, spending on MNREGA has been significantly cut in real terms.

The Finance Minister’s claim that this year’s allocation of Rs. 38,500 crore – if spent – will be the highest ever on MNREGA, is patently false. The truth is that, even if one does not account for inflation, the amount announced in the present budget is lower than the actual expenditure (Rs. 39,800 crore) on MNREGA by the UPA government, in the year 2012-13.

A look at the expenditure on MNREGA from 2011-12, clearly indicates a reduction of spending under the stewardship of the present finance minister. In the year 2014-15, the first year of the BJP government’s rule, the spending on MNREGA fell to Rs. 36,026 crore from the previous year’s Rs.38,551 crore (See Figure 1). The nominal spending increased to Rs. 37,500 crore in 2015-16. But if we account for inflation, the real expenditure on MNREGA actually fell in that year (See Figure 2). 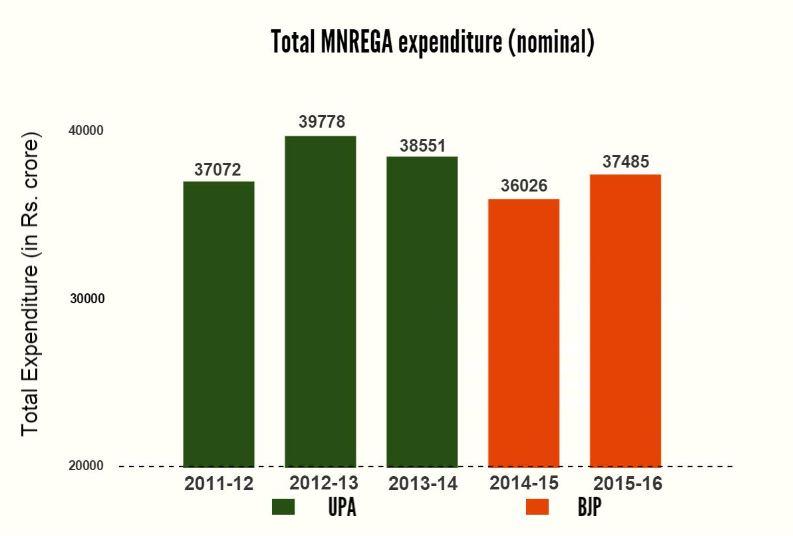 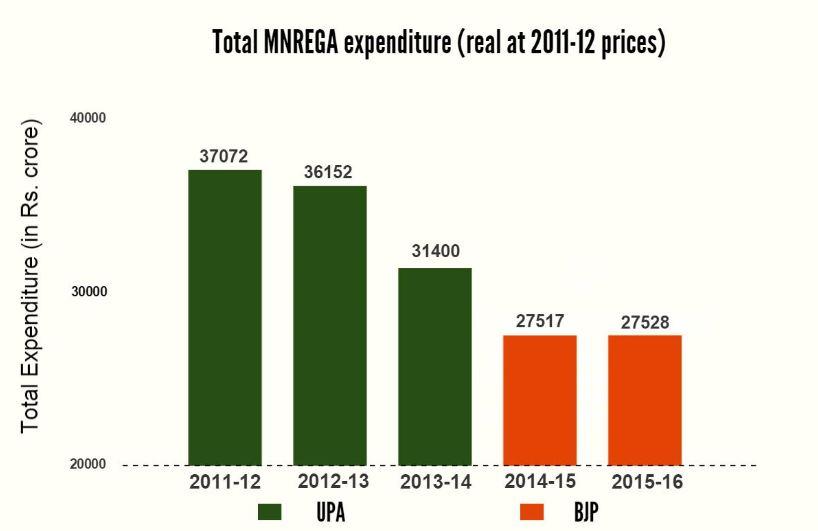 If we take the real expenditure, adjusted for inflation at 2011-12 prices using Consumer Price Index for Agricultural Labourer (CPI-AL), the spending on MNREGA fell from Rs. 37,072 core in 2011-12, to Rs. 25,500 in 2015-16, a drop of about 25%. As a result of this fall in the spending in real terms, the employment generated through MNREGA has fallen substantially. 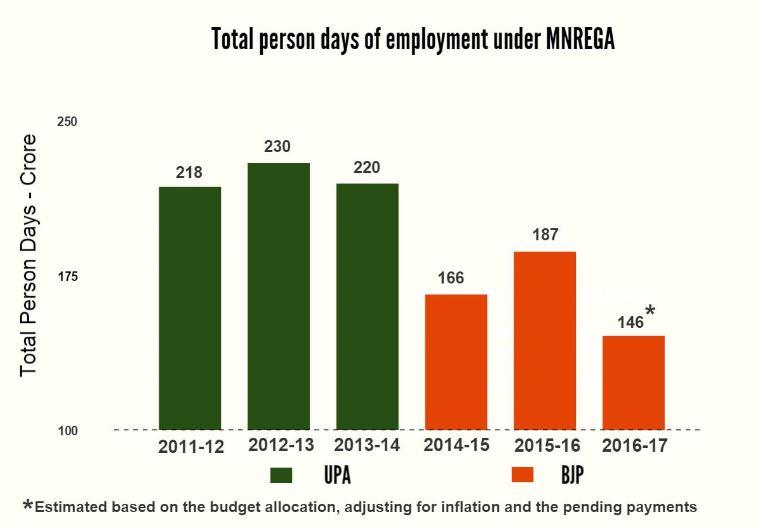 At a time when nearly half of the country’s 676 districts are hit by drought resulting in the fall of agricultural employment in the rural areas -- the announced budget outlay of Rs 38,500 crore is grossly inadequate to remedy the situation in the rural areas. Considering that the previous year’s spending on MNREGA was Rs. 37,500 crore, the new budget allocation is only an increase of Rs. 1,000 crore. Even this paltry increase gets wiped out once the allocation is adjusted for inflation.

According to Peoples Action for Employment Guarantee, just to maintain previous year’s employment -- after accounting for inflation and adjusting for the pending payments of last year of Rs. 6,359 crore -- an amount of Rs. 47,500 crore will be required. If MNREGA were to also compensate for the loss of employment caused due the prevailing drought conditions in the country, then the required expenditure would need to be even higher. Though government announced an increase of assured workdays from 100 to 150 in drought hit areas, the present budget allocation is hardly enough to provide for the increased workdays. Considering that there is already a demand from states to increase the assured work days to 200, it is imperative that the central government substantially increase the allocation for MNREGA.