Sushma Swaraj, Marginalised in 'Policy' Earns Applause for the 'Personal'

NEW DELHI: The one Ministry that seems to have carved out a space for itself, despite the big brother control of the Prime Minister’s Office, is that of External Affairs where Minister Sushma Swaraj has been earning points for person-to-person interactions. Fast developing a reputation for being responsive despite being sidelined in the big ticket decisions of foreign policy. Swaraj has been converting individual messages to her into foreign policy achievements.

A tweet from one Murtaza Jaffer to her directly said, Ma’m a Kashmiri medical student has been attacked by local goons in Russia, he in coma. Lost his money n documents too.” To this she responded asking for the details with the assurance, “we will reach him.” The Indian Foreign office reached him, and as Swaraj informed Jaffer soon after, that Yasir was being treated at the Trauma centre at the Kazan Trauma centre, and his expenses would be taken care of by the government.

Swaraj, except for the Lalit Modi affair last year, when she was dragged into the controversy surrounding the former Indian Premier League chief, has kept out of all political controversies. Her tweets and posts have more to do with specific issues regarding the Foreign office, even as she responds to personal requests of Indians facing a crisis in other countries.

She took personal interest and ensured the evacuation of Sister Sally from Yemen; and as the tweets below show she has been active in responding to requests from individuals asking the Indian diplomats in the countries concerned to deal with the requests. Interestingly, her tweets suggest a follow through with the assurances that she personally communicates to the persons who write to her, now drawing many favourable comments on Twitter and Facebook.

Swaraj and the Foreign Office coordinated Operation Raahat with the armed forces for the evacuation of Indians from Yemen while it was being bombarded by Saudi Arabia. This was a massive operation, the success of which led at least 23 other countries to ask India for help. Sources said that the Minister reposes trust in the diplomats, and ensures that the suggestions are translated into action through the necessary coordination with other Ministers in government.

Recently, the Ministry of External Affairs came under PMO/Ministry of Finance restrictions curtailing travel of the diplomats without specific permission from the top. A memorandum, according to reports then, was issued to this effect. It also stated that the mission abroad would handle the Prime Ministers visits directly and hence there would be no need for senior Foreign office officers to accompany him from New Delhi. MEA reportedly went on a ‘go slow’ to protest what officials felt would impact greatly on their work and efficiency. Minister Swaraj did not go public on this but sources claim that she worked behind the scenes to ensure that the memorandum was withdrawn.

The appreciation on the social media for Swaraj is growing, more so as is seen not to be discriminating in her responses. She is certainly not in the inner circle of PM Modi, in fact if BJP leaders are to be believed, quite the opposite being perceived as being in what scribes now refer to as the “Advani camp’, being close to veteran BJP leader L.K. Advani. Key issues of foreign policy are handled directly by the PMO, with the Prime Minister himself on a hectic foreign tour in the first two years of the government. Minister Swaraj has not always accompanied him, and is kept very much in the background insofar as policy pronouncements and visibility is concerned.

But the seasoned politician has found a small niche that seems to be paying dividends judging from the chatter on the social media about her. She is seen as being more approachable, and friendly. The tweets below give an idea of Swaraj’s interventions:

1. Sushma Swaraj responds to tweet regarding the condition of injured Kashmiri in Russia 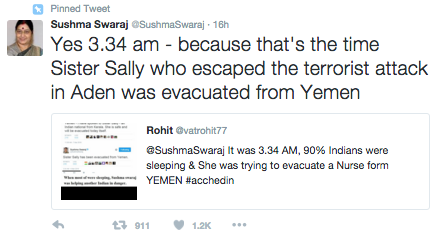 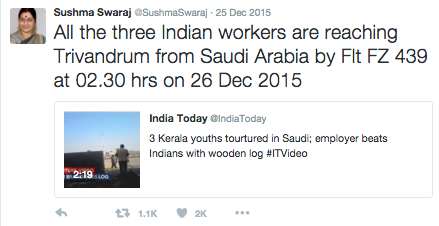 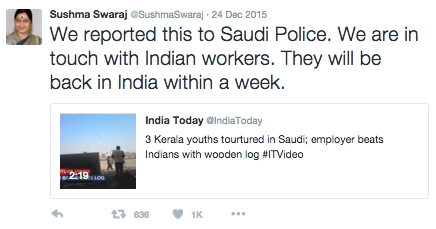 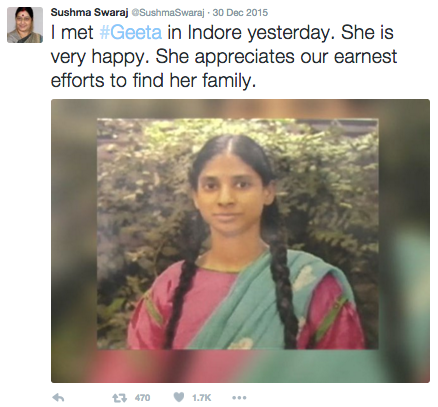 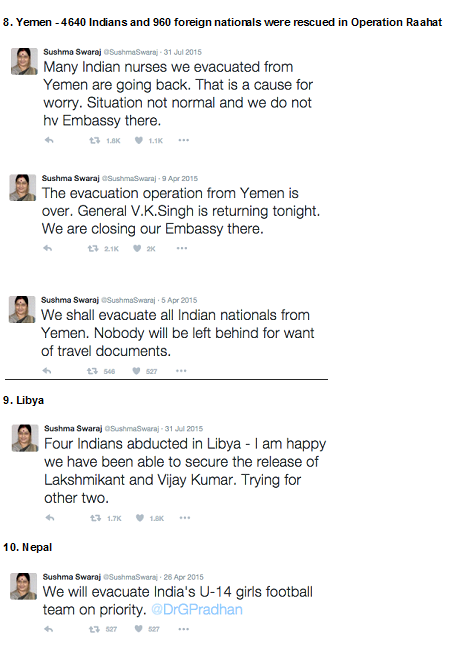 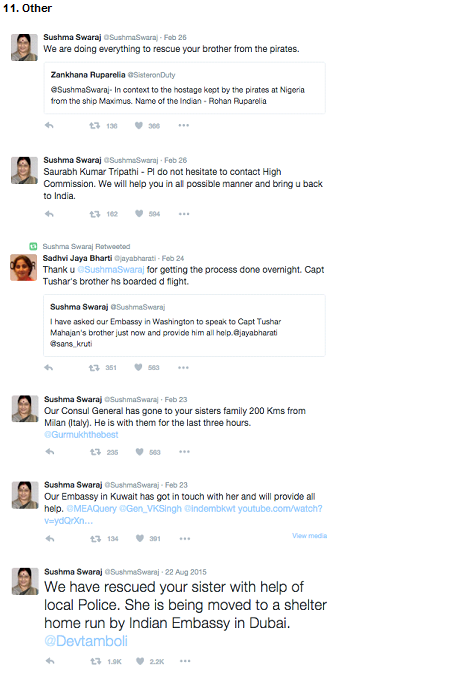