The Case of Bhagat Singh and 3 JNU Students

NEW DELHI: Congress leader Shashi Tharoor ran into trouble with both the BJP and the Congress --- that does what it is good at,”distance” itself from its member --- when he compared Jawaharlal Nehru University student Kanhaiya Kumar to Bhagat Singh, who was executed on this day by the British under the same laws of sedition.

BJP trolls were as always abusive---as abuse now is the language of neo-nationalists---with an official spokesperson of the party pointing out, “Bhagat Singh went to the gallows chanting ‘Bharat Mata ki Jai’ while fighting for the country’s independence. Comparing Kanhaiya Kumar with Bhagat Singh is an insult to the freedom fighter and all the patriots. Shashi Tharoor should tell if Kanhaiya is Bhagat Singh, then what are Rahul and Sonia Gandhi.” The point that the BJP sought to make was again lost in vitriol the “insult” being limited not just to Bhagat Singh but to “all patriots”.

Tharoor then clarified, “You are finding one marginal thing which was said in response to a comment from the audience. Bhagat Singh was fighting colonial rule and foreign oppression and Kanhaiya is fighting for his beliefs in a very different democracy. So the situations are different but the comparison (was)-young, Marxist, idealist, passionately committed to their motherland, in their 20s…that’s all.” 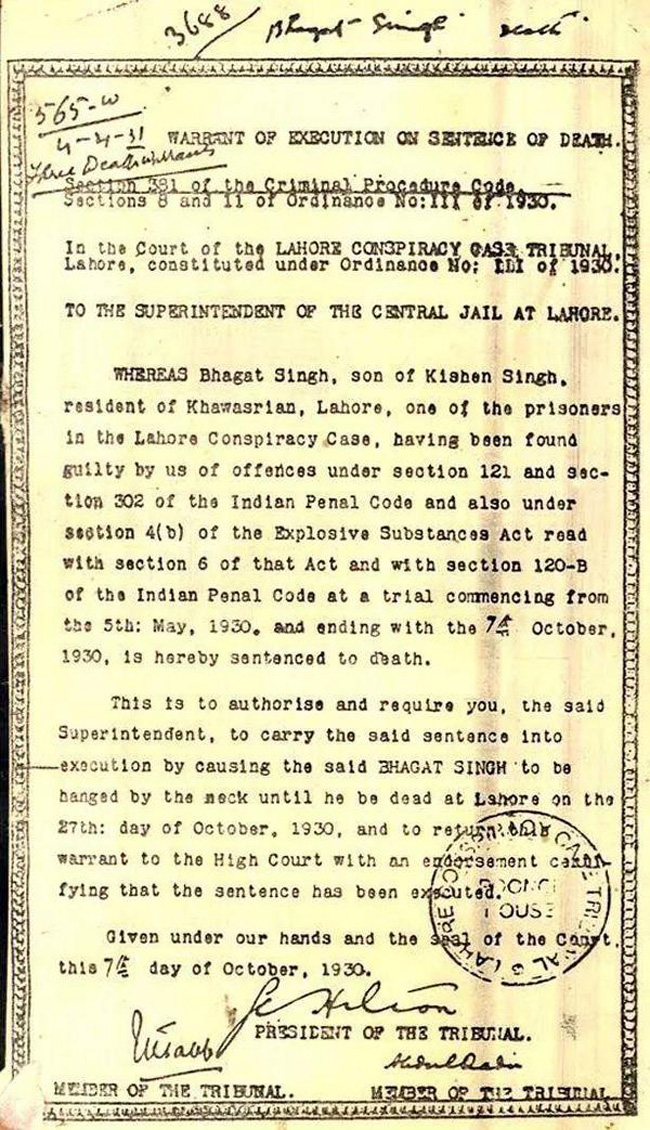 And put like that, without the history of struggle and the thought and vision that went into it, he is not far wrong. As Kanhaiya, Umar Khalid and Anirban Bhattacharya are young, passionate, political and have the courage and an honesty that is exemplary. It is not easy, and there are many bureaucrats who fall over themselves to be re-employed either in the government or with crony capitalists of the day who can testify to this, to stand up to the powerful might of the establishment with little more than one’s personal guts, that eventually turned into a flood of support from the young people across.

The comparison really starts with the sedition laws ---the same colonial law being applied to Bhagat Singh then and the JNU students now---and the passion and courage of speech that did astound even the BJP/RSS that had expected the crackdown to evoke fear and submission. And that after being beaten, abused,jailed and eventually released by the lower courts with stringent conditions of bail and a Bollywood song JNUSU president Kanhaiya Kumar would come out of Tihar jail, chastened and suitably frightened. Not many were prepared for the fight back, the bold and strong speech he gave the same day, where he took on the establishment, the BJP/RSS, and all those seeking to subvert India’s proud history and her Constitution.

Why then is the BJP so angry? As Tharoor said it was just a marginal comparison. Simple, for the following 2 reasons:

Clearly for Kanhaiya Kumar, Umar Khalid and Anirban, Bhagat Singh is a hero. A “natural hero” as Professor Chaman Lal said to The Citizen when asked if he could see any comparison. As Bhagat Singh is for the young students today who see romance in his disillusionment with non violence, and courage in his struggle against the British. The passion and the zeal of the young boys as they addressed the JNU students after their release, the idealism, the clear cut political vision, the honesty wherein they called a spade a spade without fear or favour, as well as the smiling humour that laced the comments and had their fellow students dissolving into laughter several times during what were and are tense moments certainly does not make the comparison with Bhagat Singh odious. And while the BJP anger was expected, the Congress embarrassment was clearly based in its own discomfort with independence idols who were not from within its movement. And hence the inability to draw, or accept, equations that are certainly not sacrosanct in usage.

Professor Chaman Lal, recognised as an expert on the life and death of Bhagat Singh, said that the students were all acknowledged admirers of the ‘martyr’ and his “staunch followers.” He said he saw two immediate characteristics common to all: one of courage where the students spoke with conviction, and did not try to camouflage the truth with acceptable rhetoric; and two, that all three were prepared to face the consequences of their courage and honesty. It might be recalled that in his first address after being released Kanhaiya Kumar had made light of the very real possibility of being in and out of jail, as had Umar Khalid and Anirban subsequently. They have all received death threats, as have their families, with the abuse and vilification intense.

Professor Chaman Lal had an interesting point to make. He regretted that the environment had deteriorated so badly that today those in government were unable to even appreciate the sheer courage of the boys recalling that even though the British executed Bhagat Singh, they recognised him and the others in the record as true and sincere revolutionaries.