NEW DELHI: The deep rift that has recently developed between Saudi Arabia and the United States was evident recently, when President Barack Obama arrived in Riyadh Wednesday to a low key reception that was described as a ‘snub’ by sections of the international media.

Obama was greeted at the airport by governor of Riyadh, Prince Faisal bin Bandar Al Saud, and the event was not broadcast live on Saudi TV, as is routine with visiting heads of state.

King Salman, instead, was seen on TV earlier greeting the leaders of neighbouring states at the airport tarmac ahead of Thursday’s summit of the six-member, Saudi-dominated Gulf Cooperation council. President Obama is scheduled to address the summit.

The absence of King Salman from Obama’s welcome reception and the fact that the event was not broadcast live as is customary quickly generated talk of a snub, with international media picking up the tensions and headlines reflecting on how Saudi-US ties have dipped in recent months.

The two formerly close allies, however, spent more than two hours in a closed door meeting soon afterward. Officials, according to the New York Times, described the meeting as cordial but said it underscored deep differences with the kingdom over Iran, human rights and the best way to fight terror.

Tensions between the two countries have escalated ever since the nuclear deal with Iran, where the P5+1 (China, France, Russia, the United Kingdom, and the United States; plus Germany) entered into a deal with the Shia-majority state that removes international sanctions in return for safeguards over Iran’s civilian nuclear programme. The deal was bitterly opposed by Saudi Arabia, which, given its Sunni dominated polity, is Iran’s main rival in the region.

Most recently, Obama’s comment that Saudis and Iranians should “share the neighbourhood” angered officials in Riyadh, leading to sharp public criticism of an American “pivot” toward Iran following the nuclear deal.

Wednesday’s meeting also came against the backdrop of a public debate in the United States Congress regarding a bill that would allow the Saudi government to be held legally responsible for the Sept. 11, 2001, attacks if it is proved that any officials played a role -- a charge Saudi Arabia have long denied.

According to the New York Times, officials said the issue of the Sept. 11 attacks did not come up during the meeting with the king at Erga Palace. Instead, Obama pressed King Salman to be more open to engaging in diplomacy with Iran and to find alternatives to direct confrontation with Iranian leaders and other rivals in the region. They described the king as highly skeptical of efforts to work with Iran, the Saudis’ chief rival in the region and the backer of rebels in Yemen that the Saudis are fighting.

Officials added that Obama also reiterated his view that Saudi Arabia and other Persian Gulf nations needed to rely less on the United States for their security, officials said.

A readout of the President’s Meeting with King Salman was released by the White House. It stated: “President Obama began his fourth visit to Saudi Arabia by meeting with the Custodian of the Two Holy Mosques King Salman bin Abd alAziz Al-Saud. The two leaders reaffirmed the historic friendship and deep strategic partnership between the United States and Saudi Arabia. Thanking His Majesty and Saudi Arabia for their hospitality and leadership in hosting the April 21 U.S.-Gulf Cooperation Council (GCC) Summit, the President underscored the importance of accelerating the campaign against ISIL and welcomed Saudi Arabia’s important role in the Coalition. The two leaders also reviewed regional conflicts, with the President welcoming the recent cessation of hostilities in Yemen and the King’s commitment to providing humanitarian assistance across all of Yemen. On Syria, they discussed the importance of reinforcing the Cessation of Hostilities and committed to supporting a political transition away from Asad. The President and King also exchanged views on the situation in Iraq, with the President highlighting the importance of stabilizing areas liberated from ISIL. Both leaders underscored the importance of the 2002 Arab Peace Initiative and underlined the necessity of reaching a comprehensive, just, and lasting settlement to the Israeli-Palestinian conflict based on two states living side-by-side in peace and security. Taking note of the political uncertainty in Lebanon, they undertook to consider steps to strengthen state institutions. More broadly, the President and King discussed the challenges posed by Iran’s provocative activities in the region, agreeing on the importance of an inclusive approach to de-escalating regional conflicts.‎ Separately, they discussed the political, economic, and social challenges affecting all of the countries of the region, and steps governments could take to better meet their citizens’ political and economic aspirations‎. In that regard, the President raised concerns related to human rights, and noted their importance to the United States. The two leaders agreed that their broad discussions were important to addressing the many issues of concern to the United States and Saudi Arabia.”

King Salman, whilst speaking of the visit, said, ““I and the Saudi people are very pleased that you, Mr President, are visiting us.”

Despite the amicable public rhetoric, the one thing the public took away from this visit -- judging by social media -- is the apparent political snub. 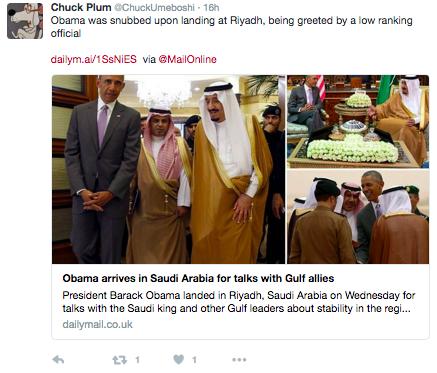 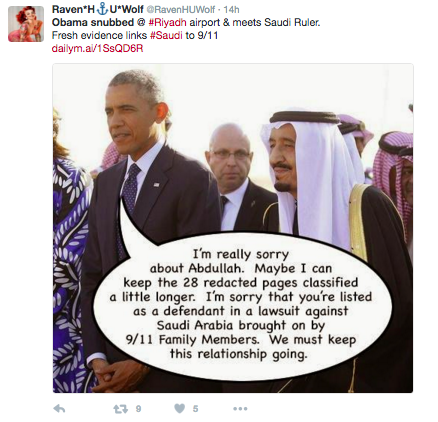