NEW DELHI: It is amazing, and absolutely unforgivable. The media and the politician have entered into a conspiracy of silence over the large scale drought that is likely to turn into deep famine as reports of agrarian distress and migration to larger towns go completely unreported.

Television news channels have of course lived up to their ‘idiot box’ reputation but the mainstream print media has also not been far behind, with AgustaWestland and the BJP vs Congress sniping taking up valuable space, even as the man made human disasters --- this includes the fires ravaging Uttarakhand --- take a back seat altogether.

For the Modi government, drought remains a state subject, even though over 330 million persons are today without drinking water ---- a concern reflected in the international media of repute but certainly not within India. The Right to Drinking Water has been violated and as the General Secretary of the All India Kisan Sabha Hanan Mollah told The Citizen, “I just do not know what this government is doing, there is no response, they do not care, no one cares---politicians, journalists, business community---no one.” 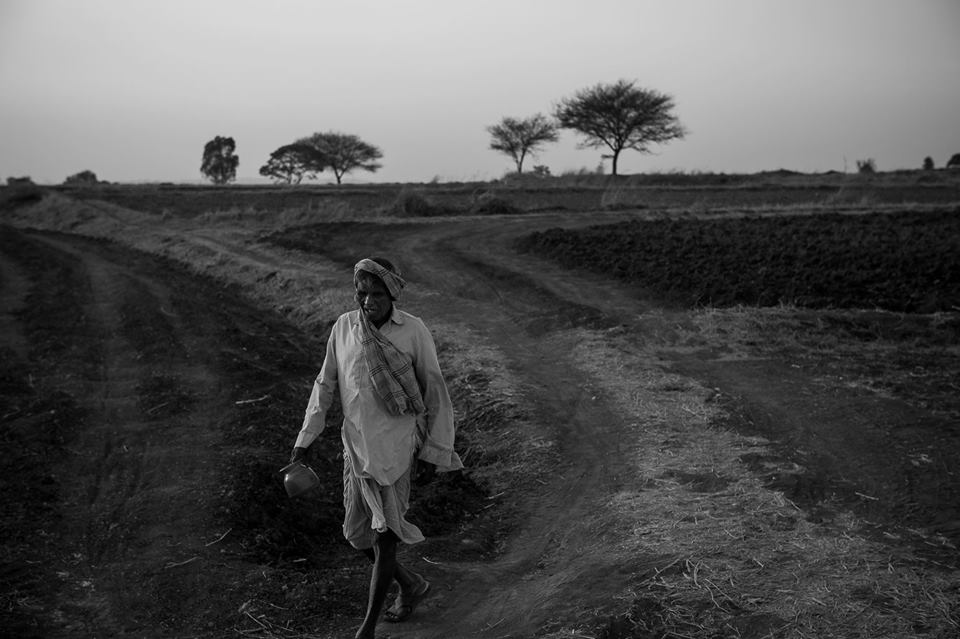 (Bhakna is a 70 year old farmer from the Tarihal village where four wells have dried up due to the lack of rain. Every day, inhabitants of this village walk for hours to access water brought in tanks from the nearby city of Belgaum. Farming has been particularly hit, with the crisis leaving the fields fallow and vegetable production at a still point.)

Experts confirmed that not a single meeting had been held by the key ministries at the centre to deal with the crisis with what now requires war like measures, pointing out that even if some steps are taken it will take at least 15 years to bring basic relief to the distressed and desperate farmers. However, no steps have been taken, let alone proposed with short term and totally inadequate measures like the water train to Latur alone making it to the media front pages.

Large scale migration that is set to assume “huge” proportions has begun. Currently the farmers and the rural poor are moving from their homes to towns in Maharashtra itself, as in Karnataka and Andhra Pradesh. The government’s effort is to hide this, rather than deal with it, with the displaced population already finding it difficult to make their poor ends meet in cities like Pune that has taken the first flush of internal drought displaced migrants.The political leadership at the centre has taken a decision not to own the drought that the states are expected to deal with on their own.

Instead the centre seems to be more interested in acquiring land for its proposed Punjab to West Bengal, Delhi to Mumbai freight corridors. An Ordinance for acquiring agrarian land along the corridor was defeated by the Opposition, the government seems determined about ensuring this acquisition somehow. 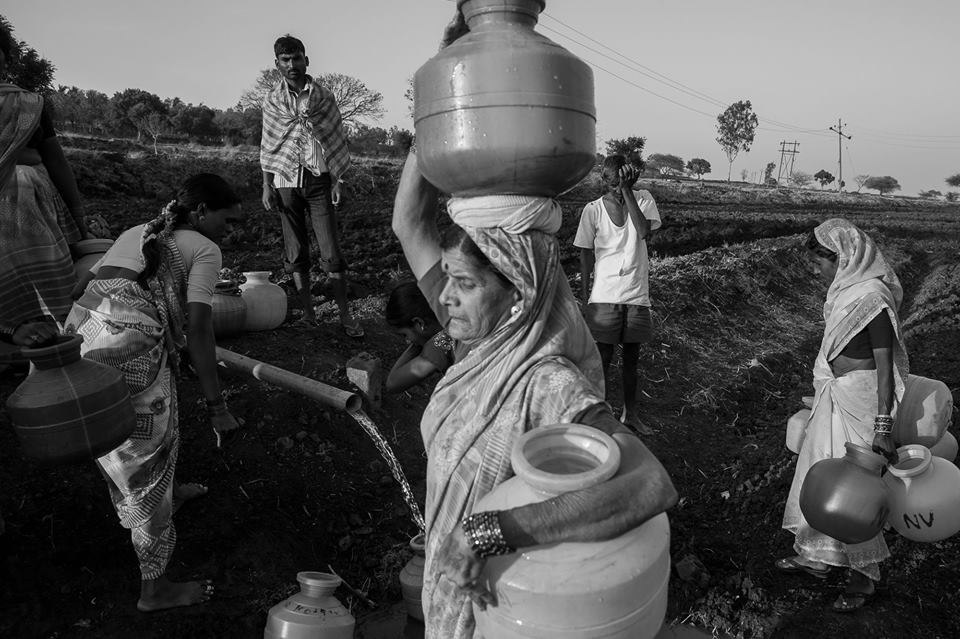 (Mastamardi, Karnataka: Simmering heat and depleting groundwater defines the situation in the Mastamardi village that has been facing a drought for consecutive years. People are facing severe hardship to get potable water as ground water shortage has led to acute scarcity).

In Maharashtra the crisis has been looming for years now, with the drought third year in running. Despite warnings for decades, the governments have taken no long term measures to ensure that the water levels did not drop beyond repair, and create conditions such as now of acute drought moving into famine. Alarm bells have started ringing but as experts point out, these are not being heard in the deaf corridors of power. Mollah pointed out that over 315 farmers have committed suicide in Maharashtra in the first four months of 2016, and deep distress is being reported from at least 13 other states in the country. 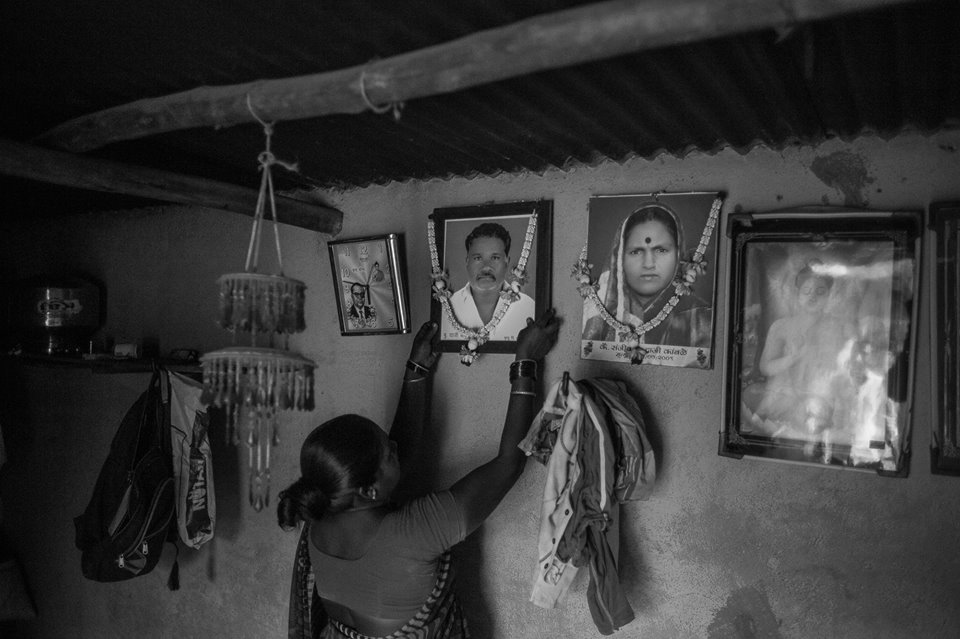 (Daji Babu Kamble took his own life about a year and a half ago, leaving behind his wife, three girls, one boy and his disabled mother. Kamble was deep in debt, as his village Arjunsond, in Maharashtra's drought ridden Solapur district, had not seen sufficient rain in three years. Today, at least 10 farmers commit suicide on a daily basis in this region alone. In this photo, Kamble's oldest daughter, hangs up her father's portrait).

Small to medium businesses have closed because of scarcity of water; farmers land has turned into dry parched earth; households store water available even in the bigger towns like Latur only once every couple of weeks; wells are dry with photographs being taken by the more enterprising local stringers of women virtually scraping the water beds; and yet given the volume and the severity of the crisis the response from the government and Parliament has been meagre, actually non-existent. A desultory mention here, a debate that no one really cares about in the media or the government or even within the opposition sums up the political response to the crisis that is growing by the day, with more farmers committing suicide and the governments standing by,

Reports and fact finding teams have suggested several measures that need to be taken. Not today but when the drought first made its appearance---stop sugar cane cultivation being one of them to which the state government has now responded by banning cultivation in 14 districts. But measures to consume less water, to harvest water efficiently, to stop needless loss of water, to prioritise the use of water have not been implemented, with a few piecemeal decisions being taken.

Kisan leaders are sceptical about this pointing out that a new policy, based on reality, with fast and efficient implementation to ease the agrarian distress was called for. But there has been no response from the government or the opposition, both consumed with issues being driven by the corporate media and lobbyists. The Congress that has announced a gherao of Parliament on several issues, drought being just one of these, is clearly doing so to divert attention from the defence deal allegations and not out of serious concern for the millions reeling under drought across the country, more so in the southern states of India. 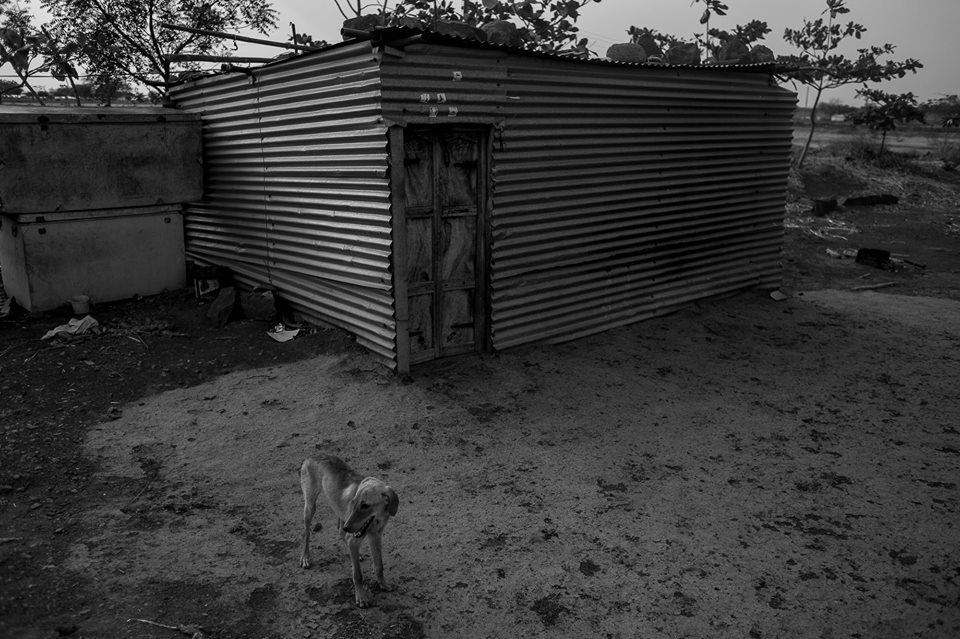 (The door is locked. Finally, a neighbour opens it. Inside the 120 sqft house, built using metal sheets, time stands still. Clothes lay neatly folded on a wooden shelf. A small cooking stove and a statue of a Hindu God are the only other belongings. On the wall hang a few pictures of the family that once lived here. A year ago, racked with debt, Limbajy Devaro Sabale from Khuneshwar walked 4km from the village and took his own life. He committed suicide by hanging himself. The neighbour who opened the door, hasn't seen the wife and two sons in three months... He hopes that she made it to her relatives in Mumbai.)

Mollah said that bottling plants have taken over large quantities of what is now a scarce commodity with the governments taking no steps to stop this. In the process water is sold back to the rich for Rs 15 or more a bottle--- a price crossing Rs 150 in luxury hotels---while the poor of India now parched for water, leaving homes, closing businesses, and committing suicide.

The so called national media has ignored the drought. The morning newspapers bring in headlines on AgustaWestland (for days now), CNG taxis, one at least breaking practice to report on the Uttarakhand fire and what the government is doing about it, but little to nothing about the drought that shows no signs of abating. There has been some talk from the weathermen about the possibility of rains but again experts say that there seems to be no indication verifying this.Besides the water levels have dropped to such low levels in most affected states that an adequate monsoon in one season will have minimal impact. The temperatures have already crossed 40 C in several of the states under drought with even a normally low temperature city like Bangalore recording new heat levels this year.

(Photographs by Zacharie Rabehi, who - on assignment for The Citizen - is currently travelling through the worst drought affected areas in the country).