The Story of India's Drought In Photographs: From Dry Fields, to Suicides, to Migration

MUMBAI: India is in the midst of a debilitating drought, as about 330 million people are suffering from water shortages. In towns and villages across the affected states, water has become a scarce commodity with the government now running a few water tanks that only cater to a fraction of the need. Despite the scale and urgency of the calamity, news regarding the drought remains absent from the media narrative and within political circles.

Distressed farmers continue to take their lives, with over 200 suicides already reported this year. Maharashtra heads the list, as it did in 2015 reporting 1841 farmer suicides as per the data placed in Parliament by the government.

Well-known French photographer Zacharie Rabehi, on assignment for The Citizen, travelled through some of the worst drought affected areas in Maharashtra, Karnataka and Tamil Nadu. 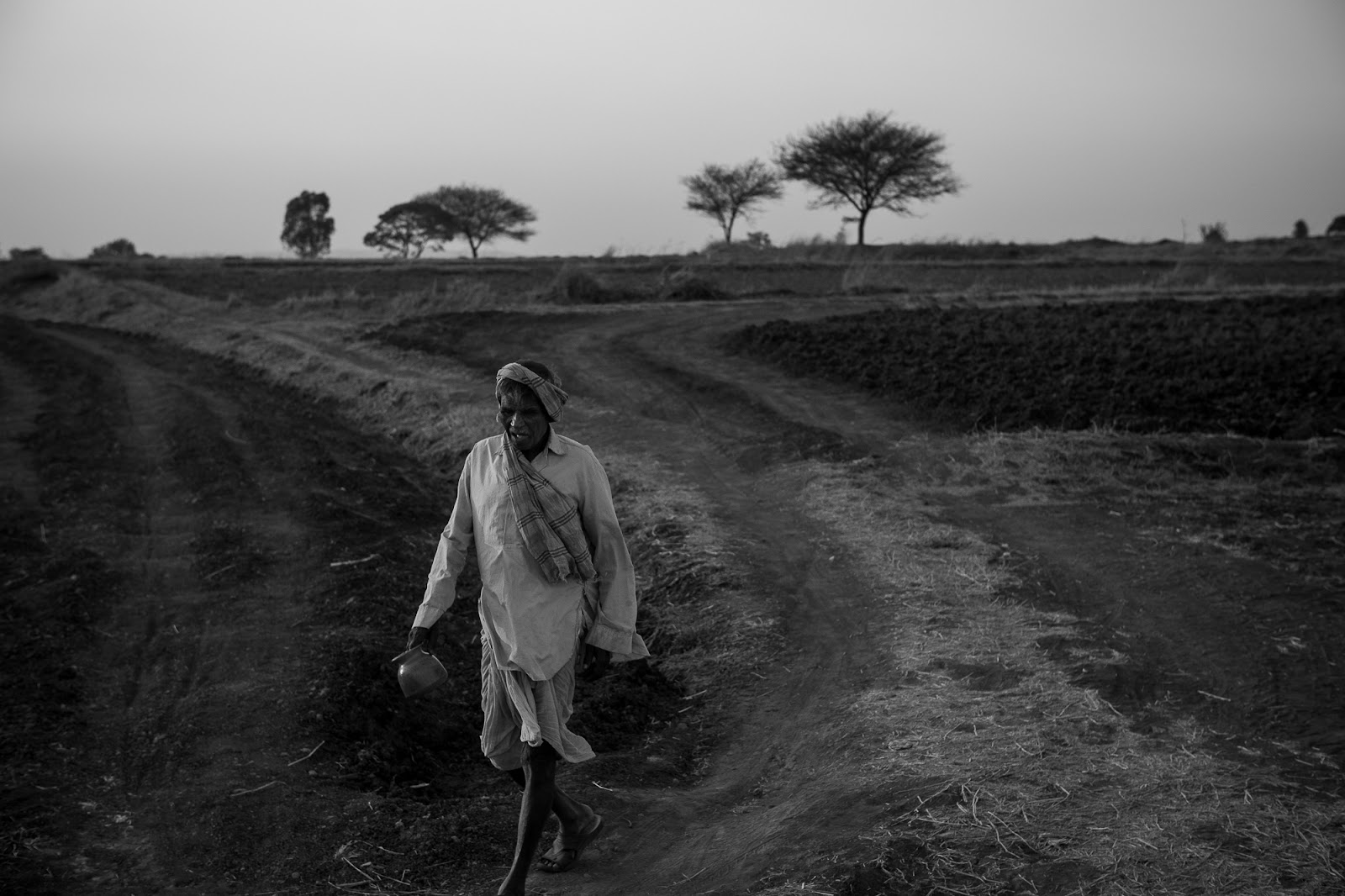 Bhakna is a 70 year old farmer from the Tarihal village where four wells have dried up due to the lack of rain. 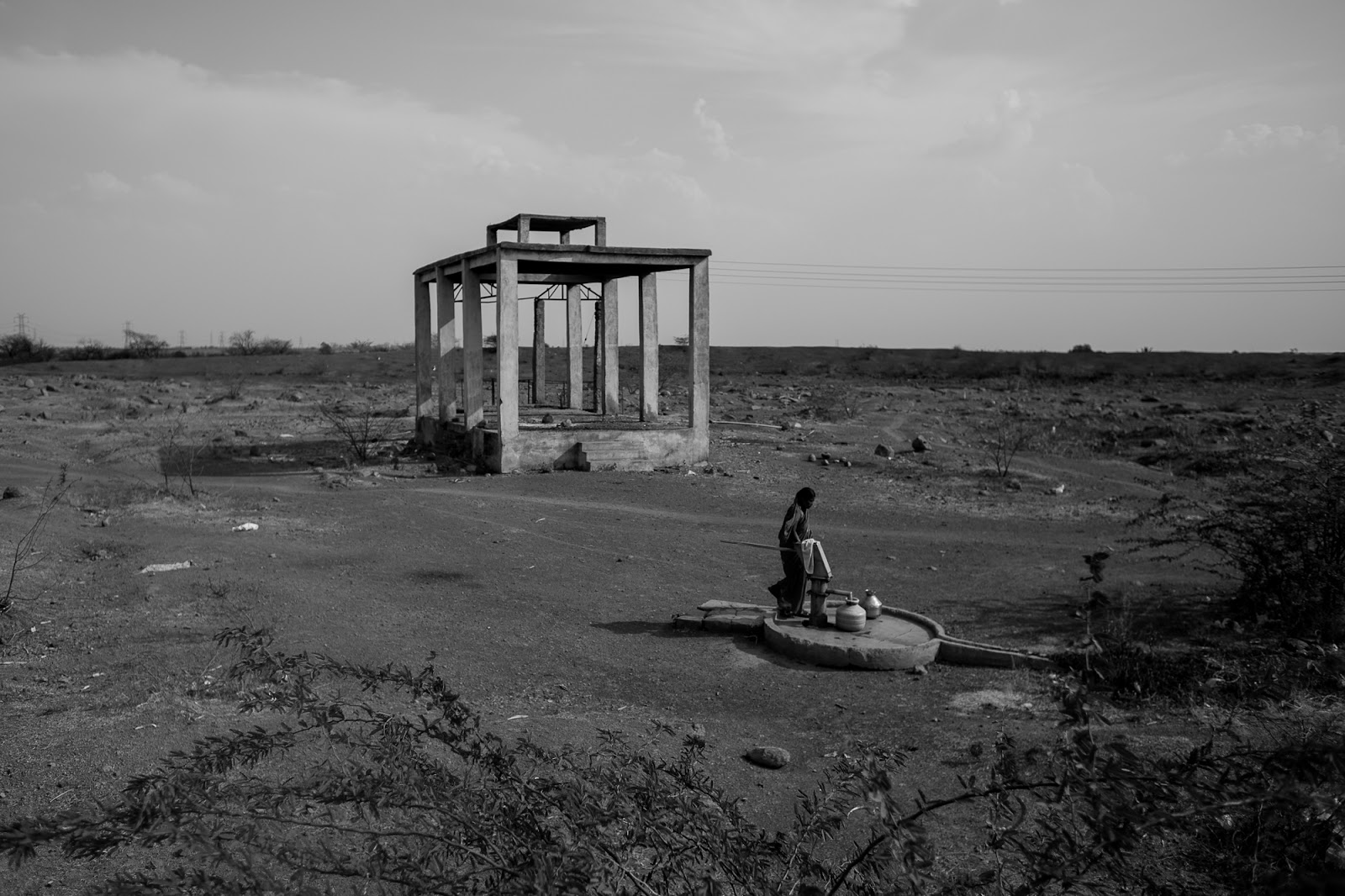 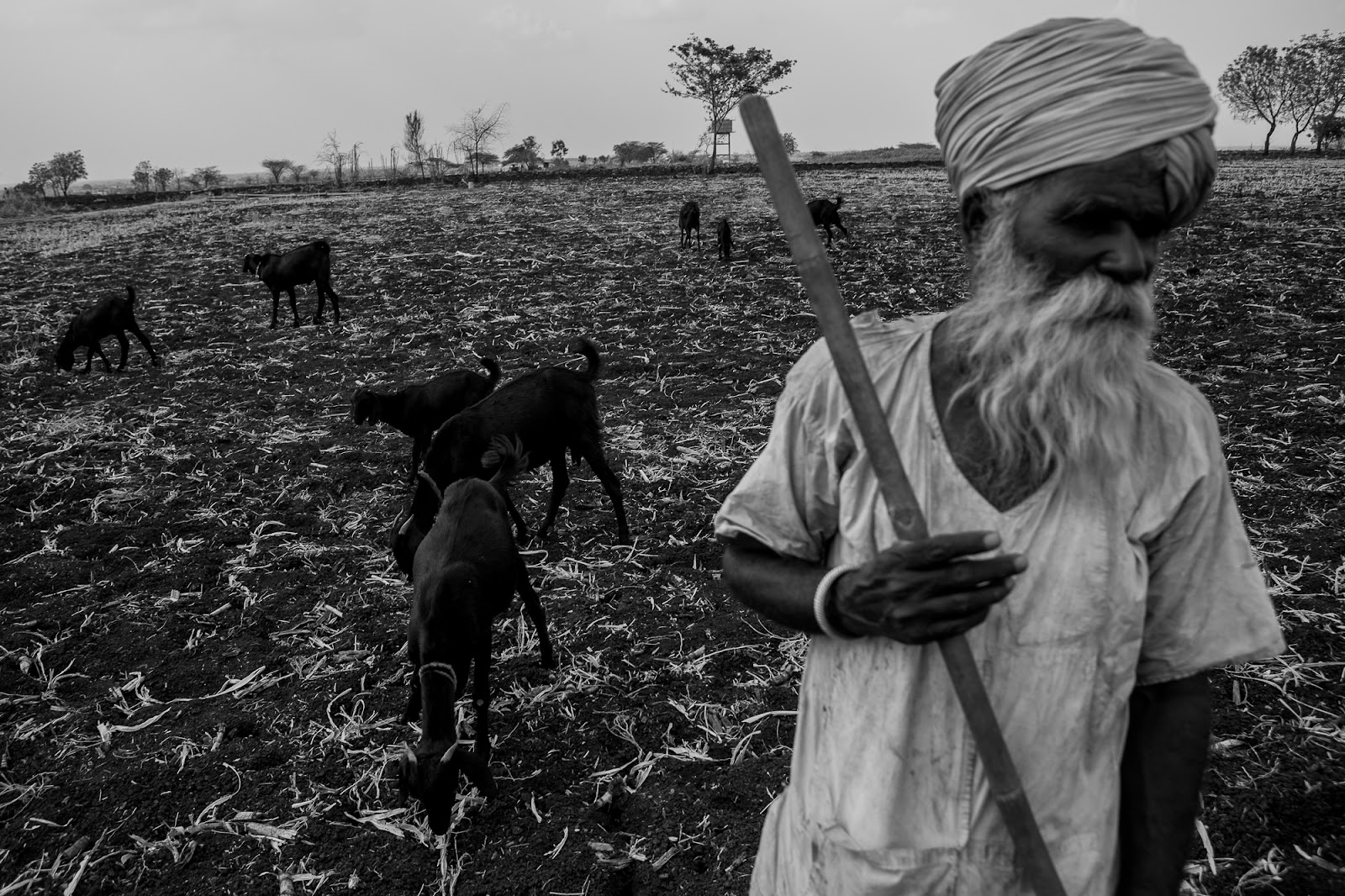 Rama Chandra from Sawaleshwar in the Solapur District walks his goat herd on parched land. 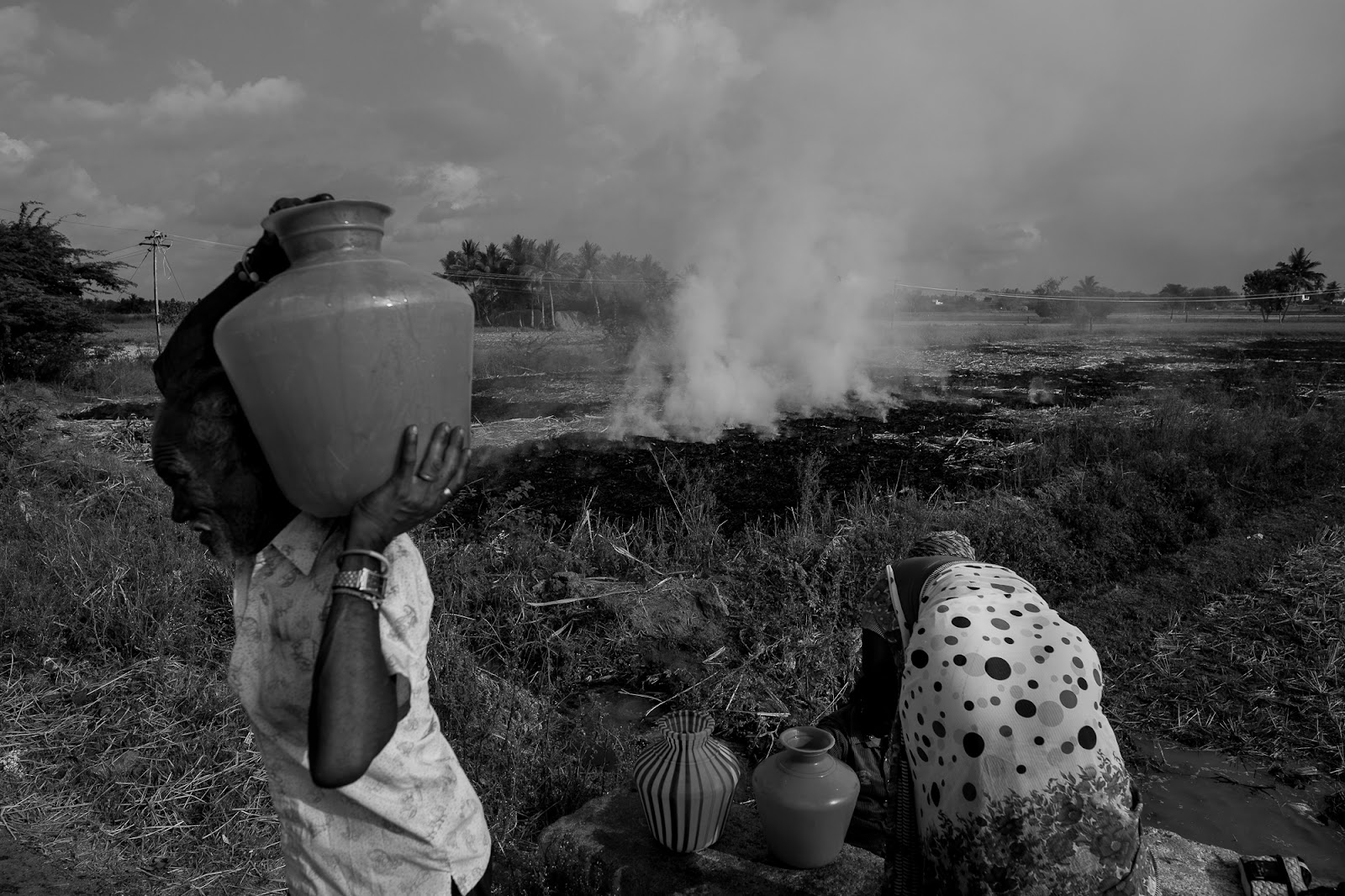 Local fill their jugs from a broken pipe in Anna Nagar, Thiruvennainallur district in Tamil Nadu. 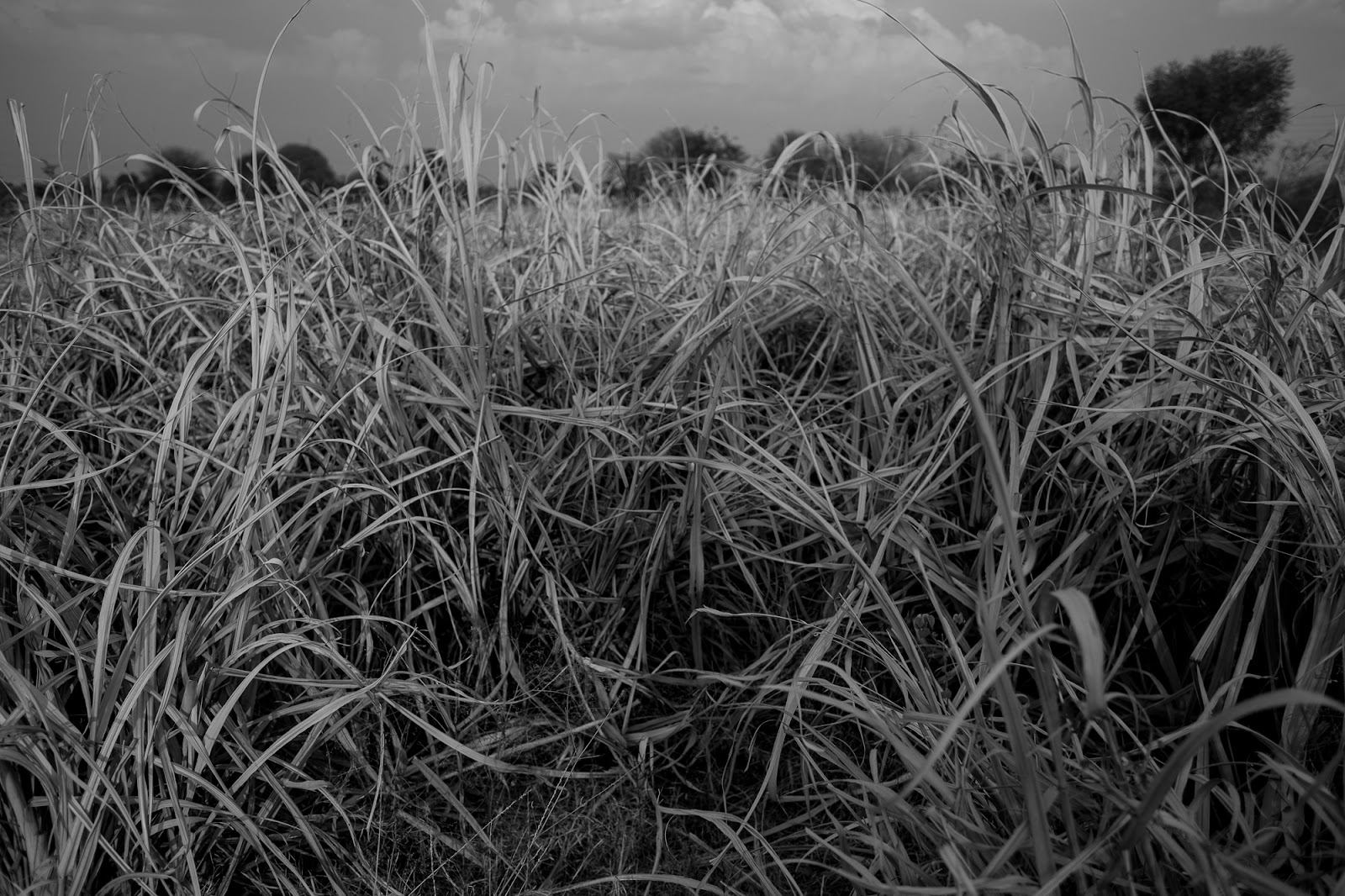 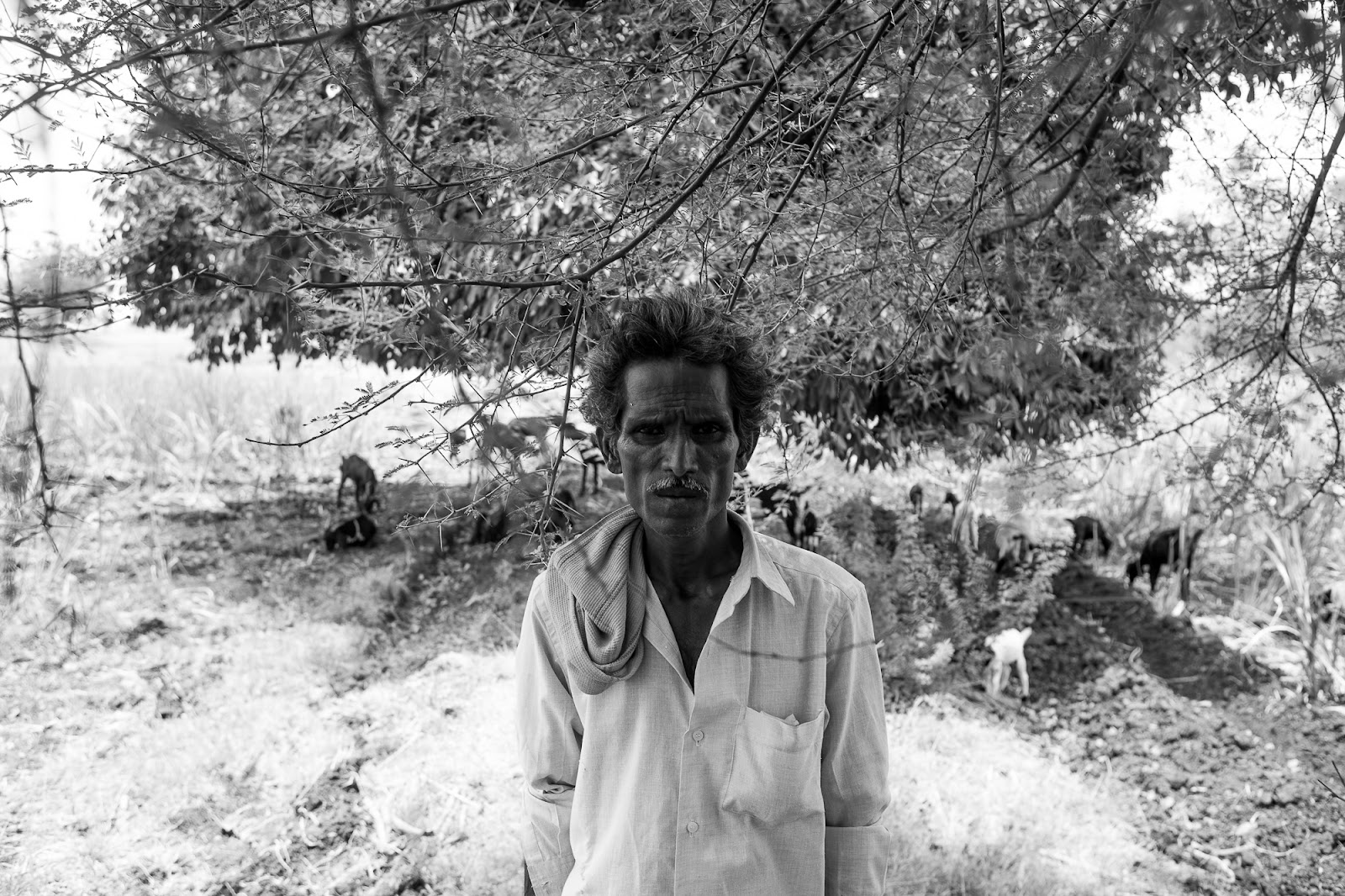 An unnamed farmer with his goats in the Solapur area, Maharashtra. 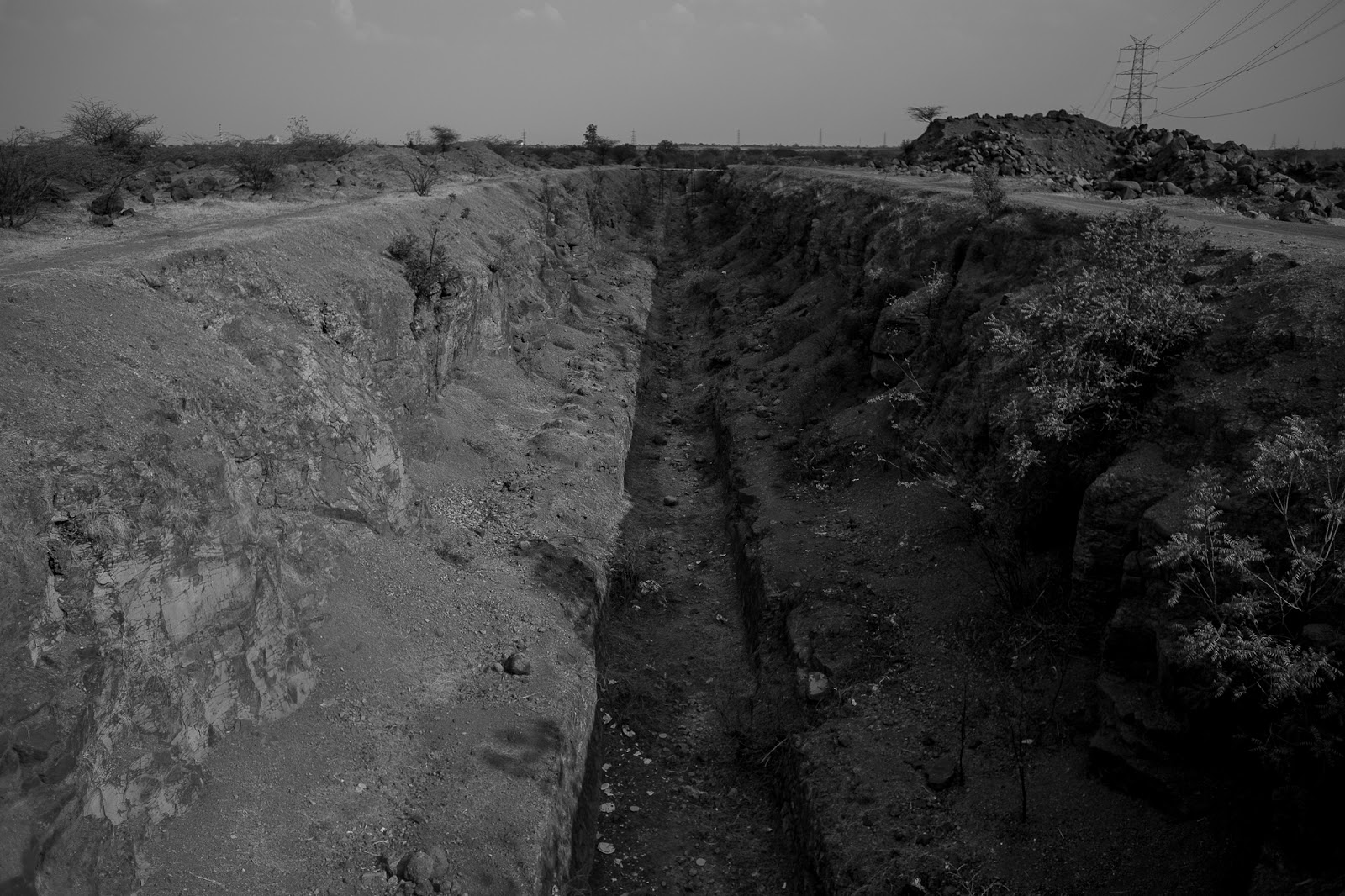 A canal, dried up, in Mohol District, Maharashtra. 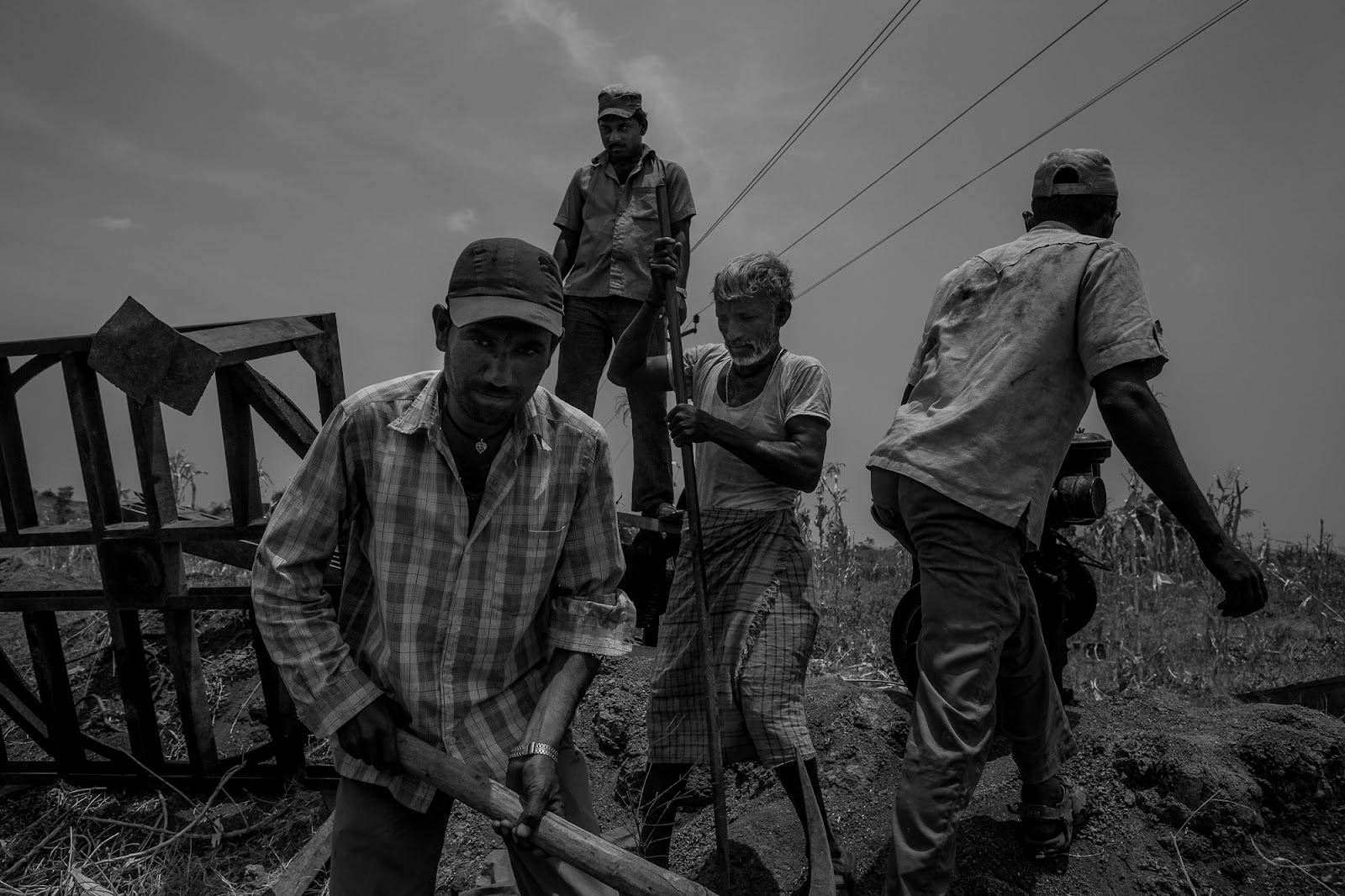 Men working on a new pump for an almost dry well inside a peanut farm in the Solapur District, Maharashtra. 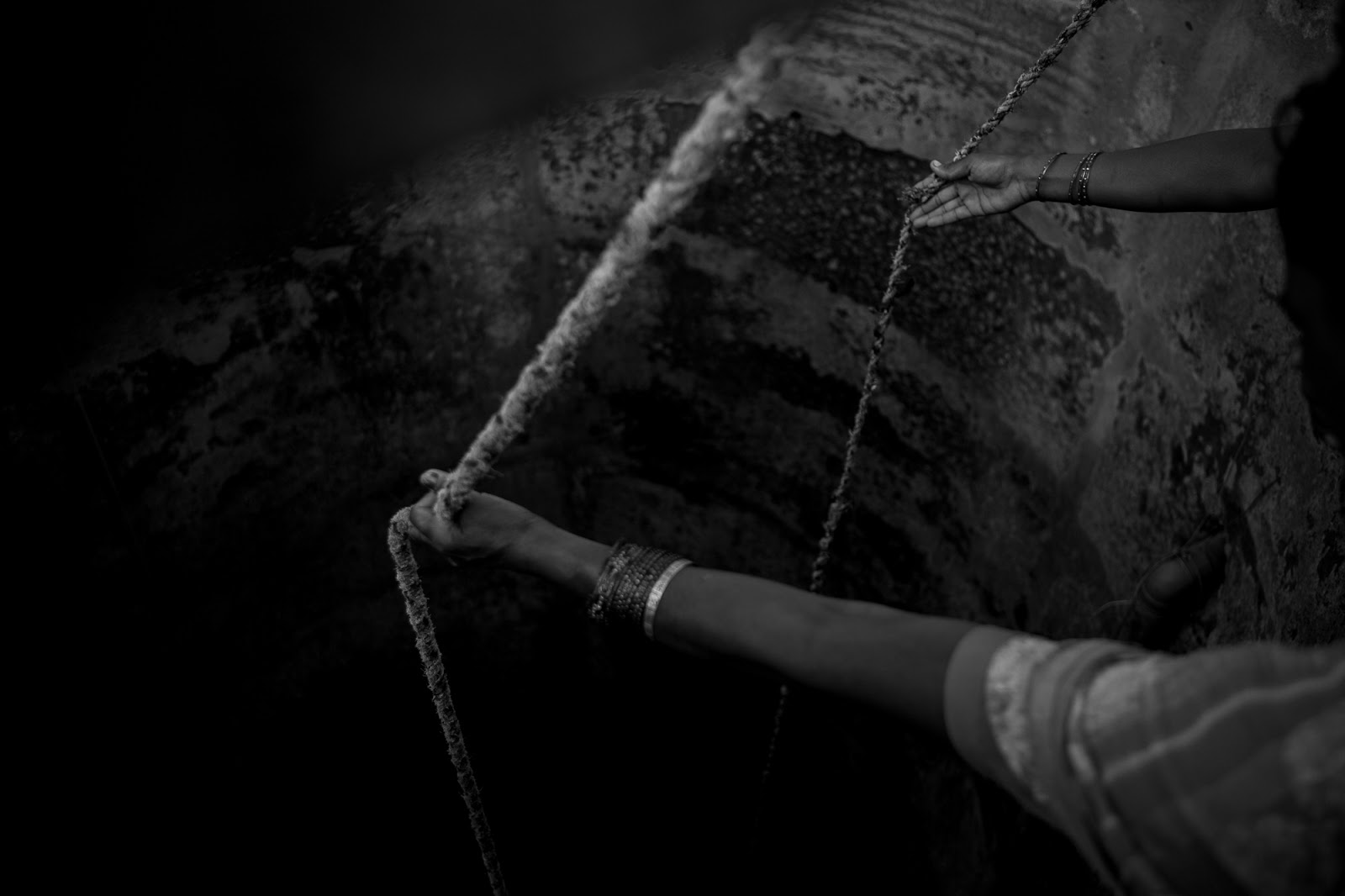 In the village of Tarihal in Karnataka’s Belgaum region the inhabitants used to meet their daily water needs from the four wells. 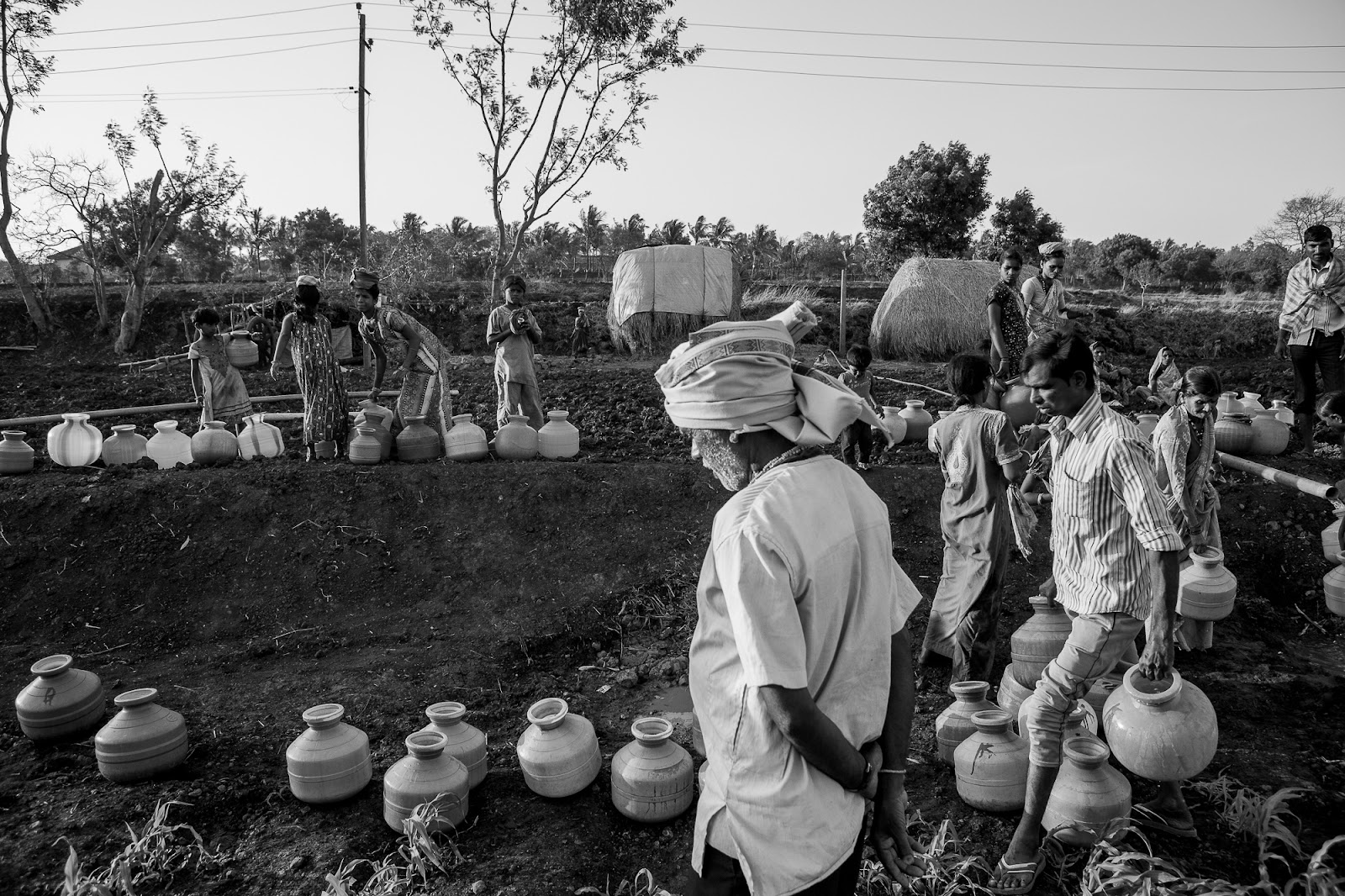 Simmering heat and depleting groundwater defines the situation in the Mastamardi village, Karnataka that has been facing a drought for consecutive years. 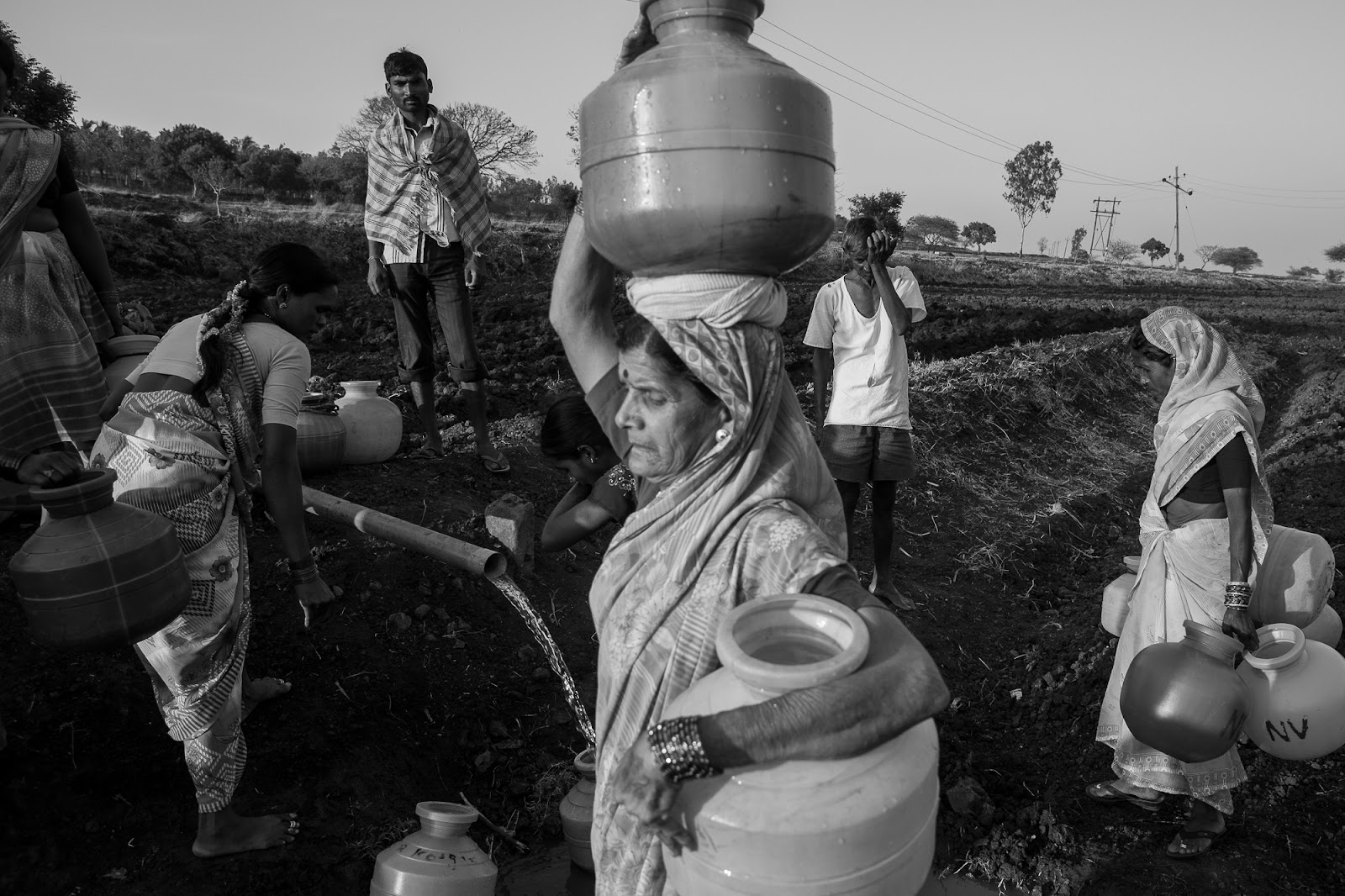 The government’s position is that the drought currently gripping India is a “natural phenomenon. This has been strongly contradicted over the years by experts who have pointed out that drought is largely man-made following government’s refusal to take long term measures and protect the farmer from this crippling scarcity of water. 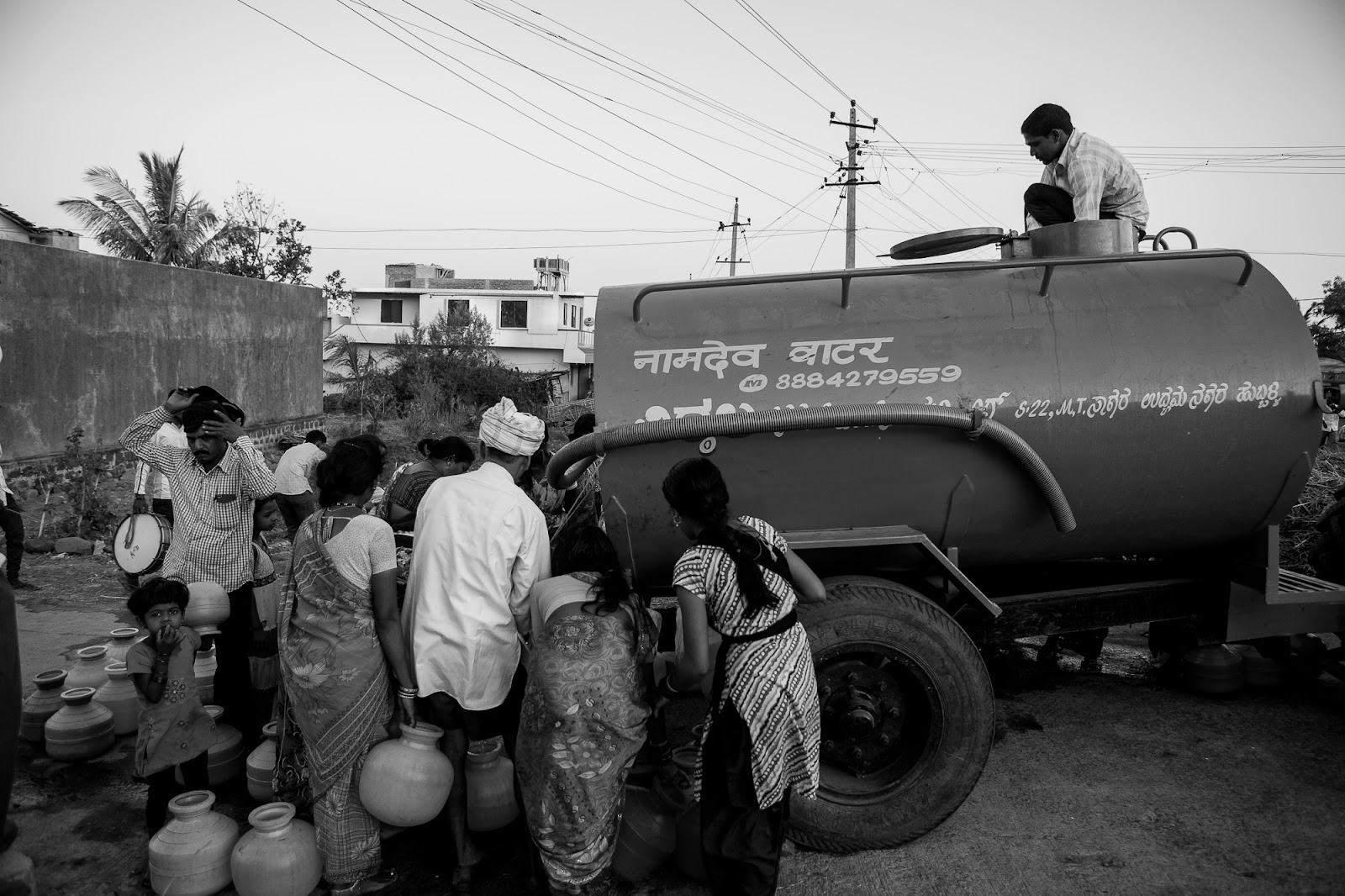 Crippled by the drought, villagers in Mastamadi rely on government tankers, which brings water once a day. The villagers gather around the water tanker, rushing to fill their jugs. 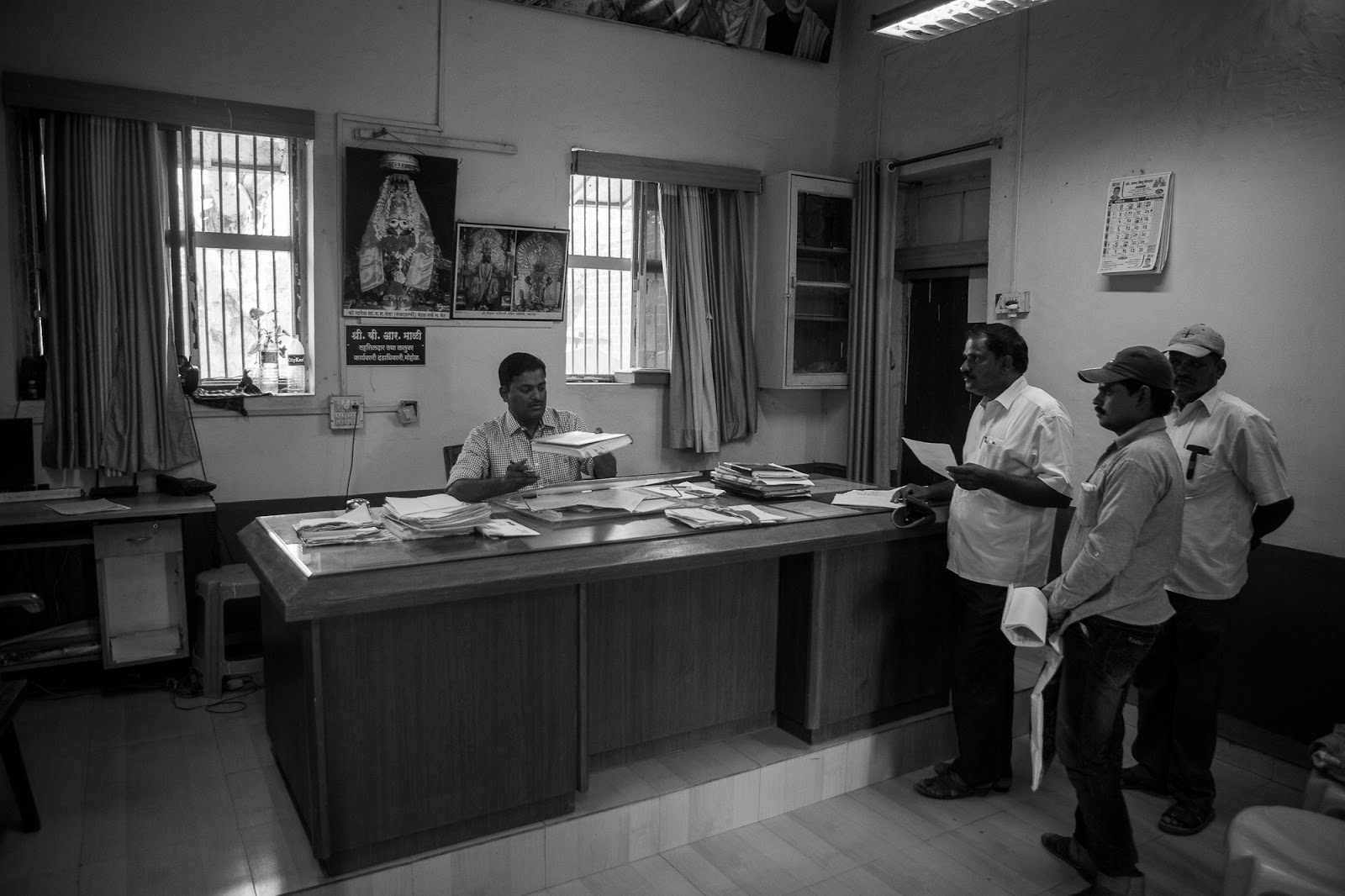 In the mohol administration office, the officer keeps a record of the 11 farmers who committed suicide in the past year. The total population of the area is 280,000 people. 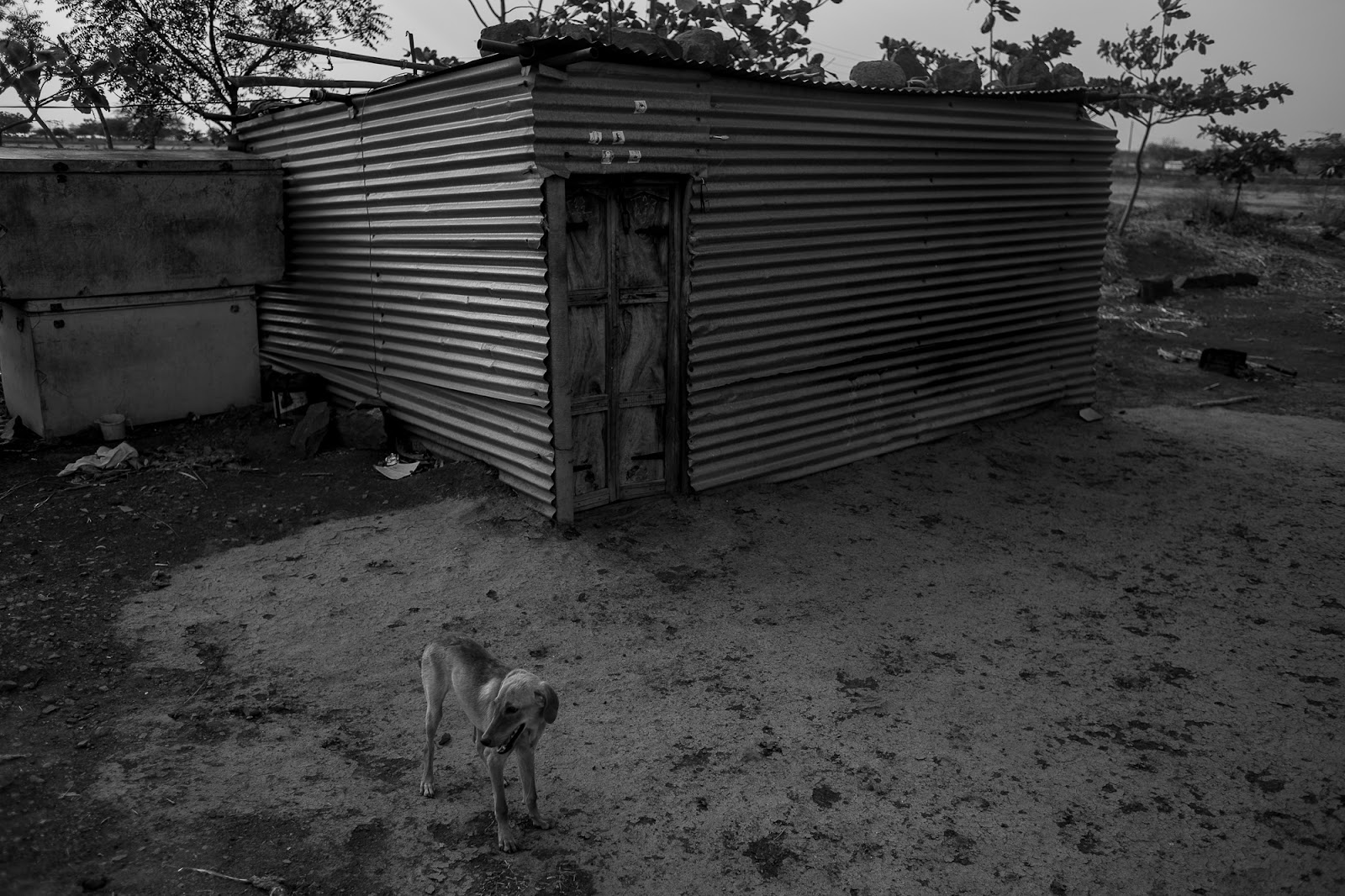 The door is locked. Finally, a neighbour opens it and lets us in. Inside the 120 sqft house, built using metal sheets, time stands still. A year ago, racked with debt, Limbajy Devaro Sabale from Khuneshwar walked 4km from the village and took his own life. 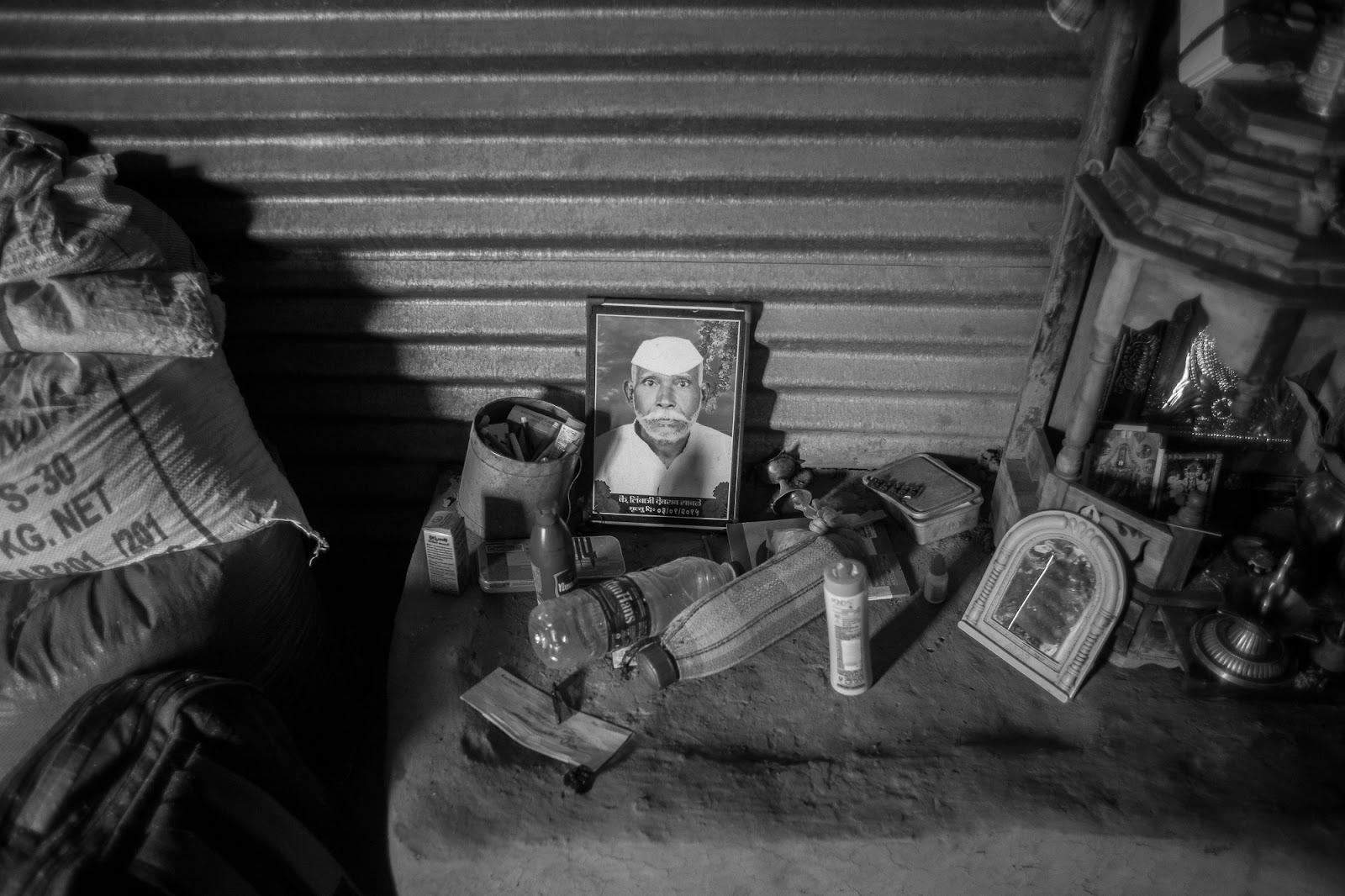 Sabale committed suicide by hanging himself. The neighbour who opened the door, hasn't seen the wife and two sons in three months... He hopes that she made it to her relatives in Mumbai. 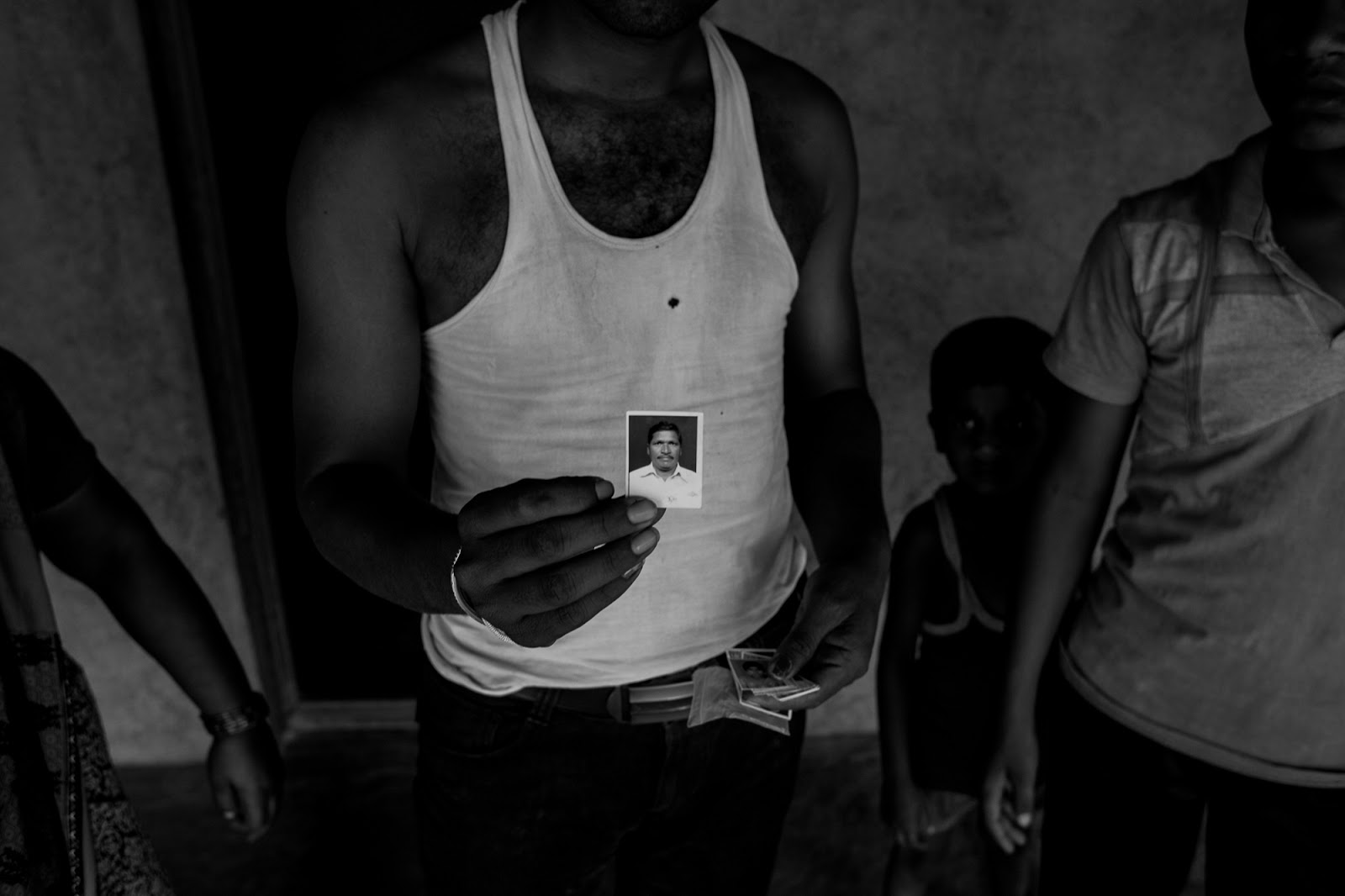 Kolegaon, Maharashtra: Anil Machintra took his own life at the age of 45, leaving behind 4 girls, 1 boy and his wife. 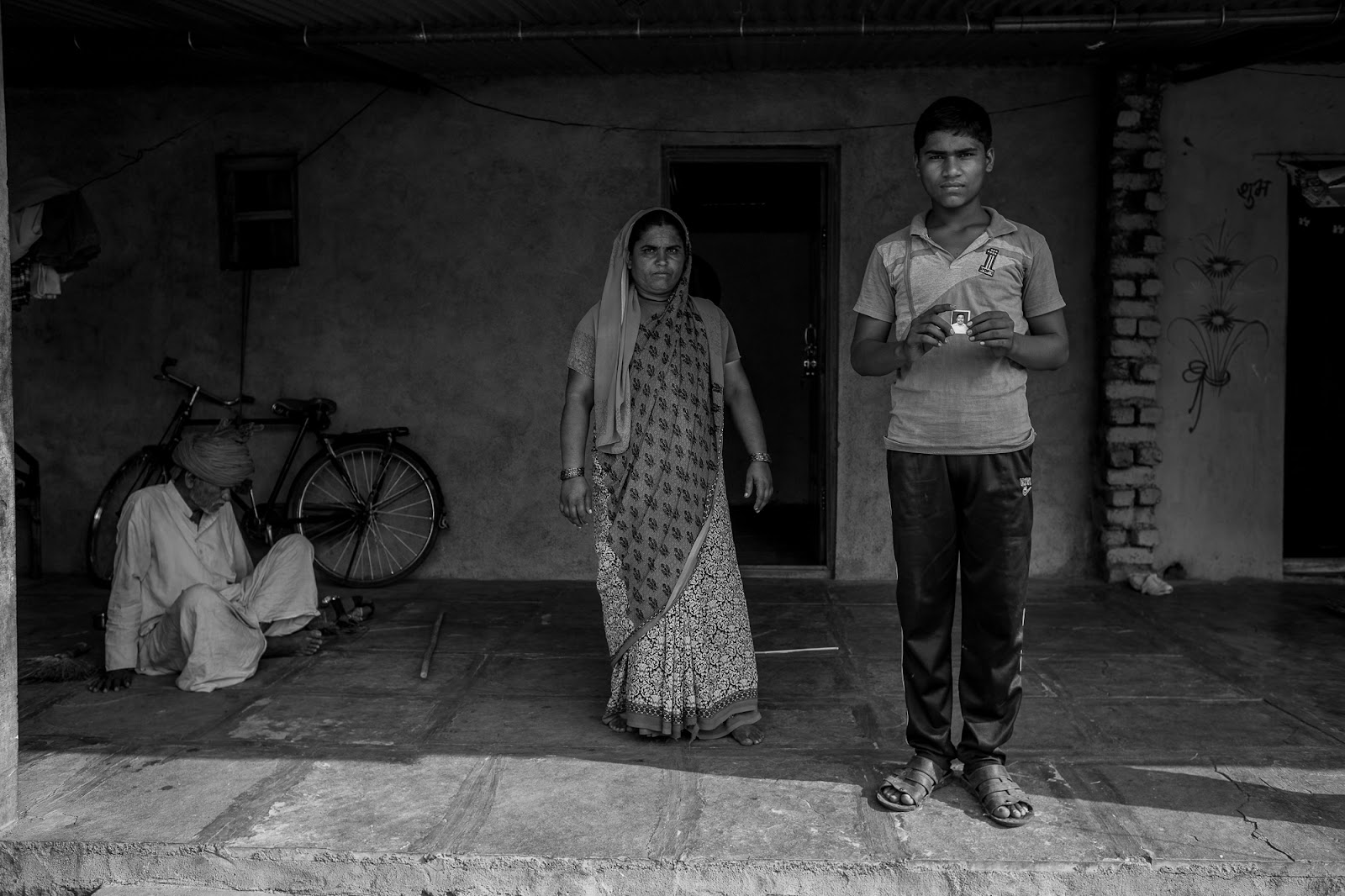 In what is a pattern with farmer suicides, Machintra couldn’t recover from the loan debts. He hung himself. 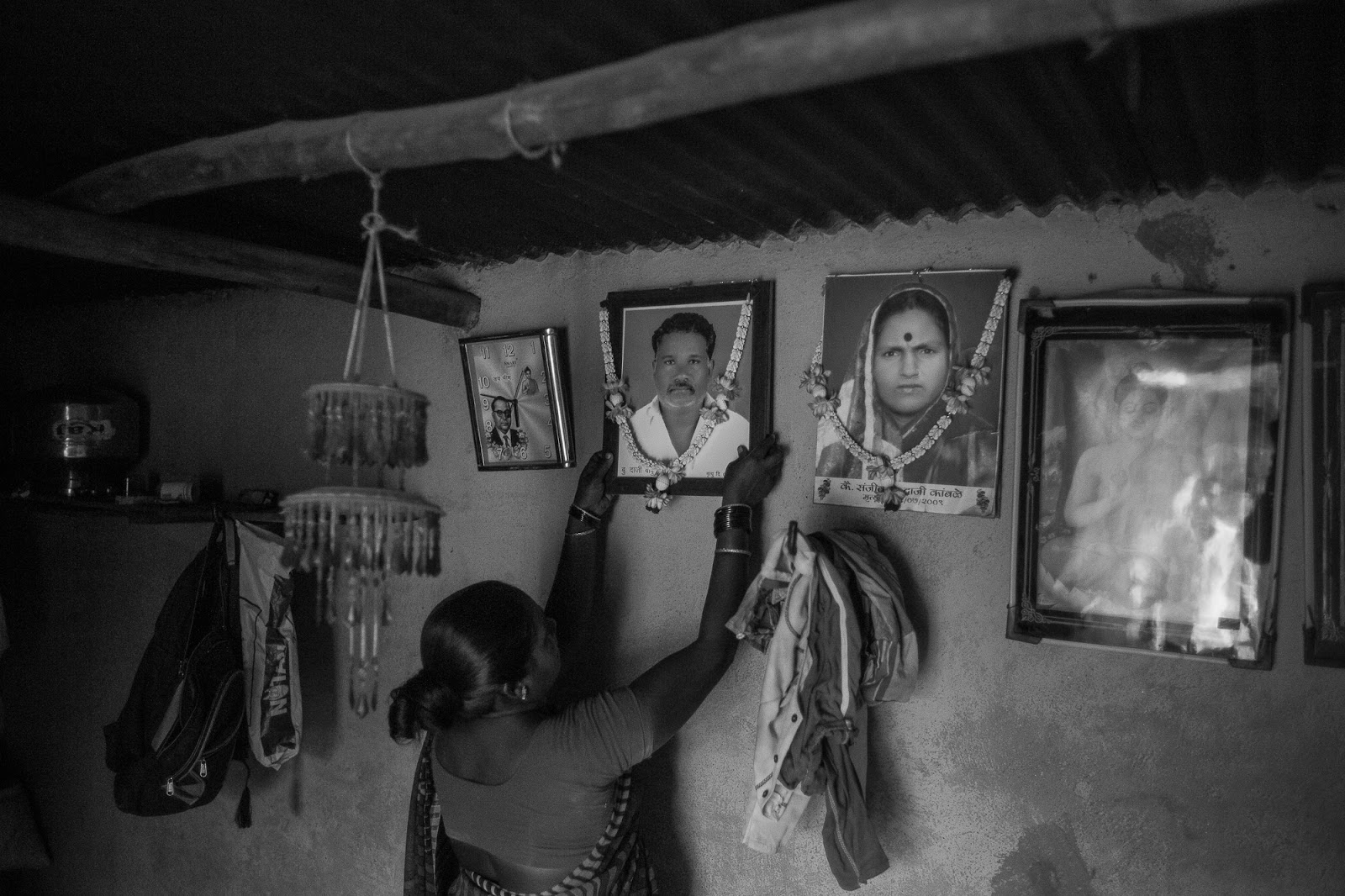 Daji Babu Kamble took his own life about a year and a half ago, leaving behind his wife, three girls, one boy and his disabled mother. 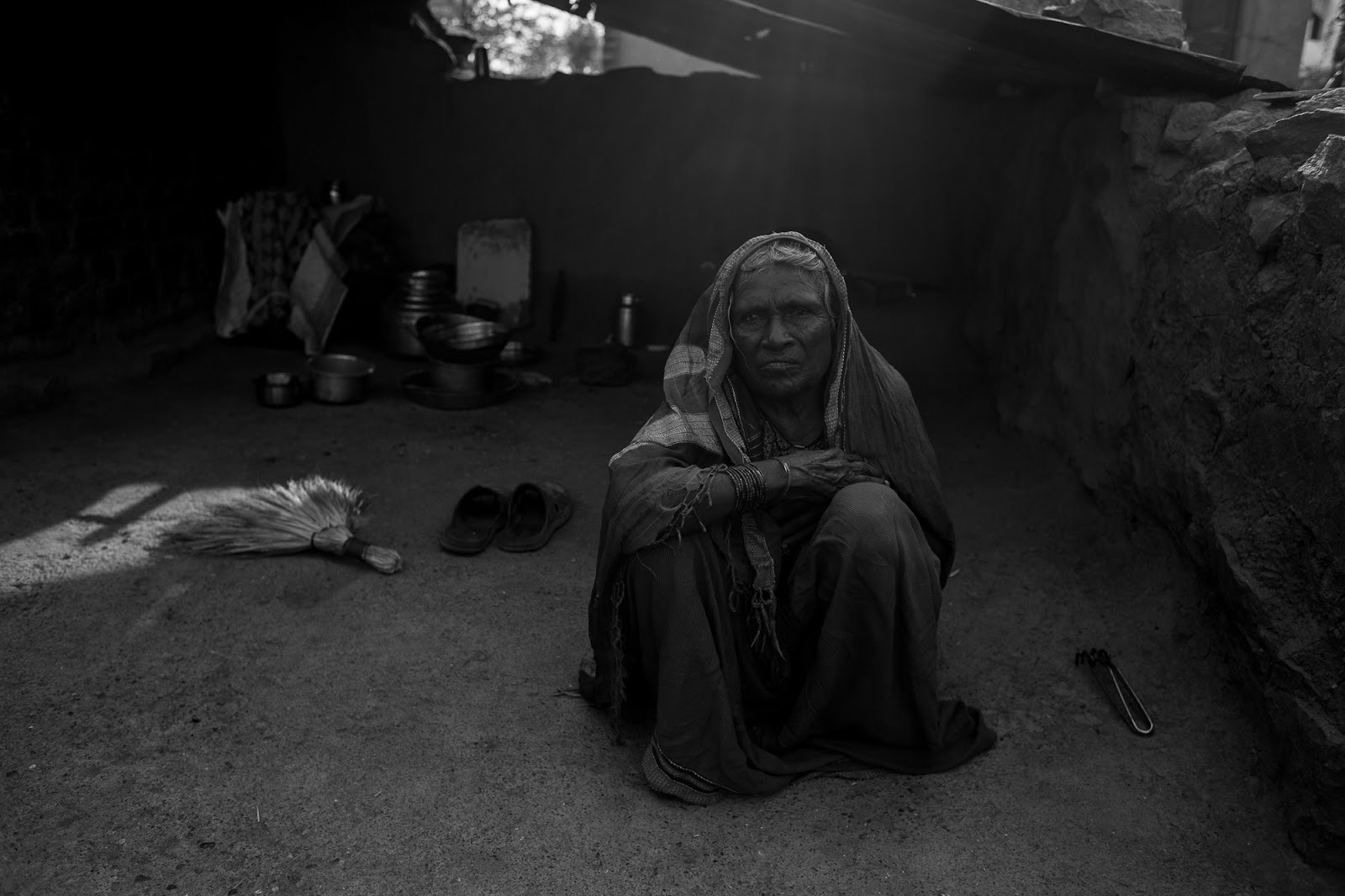 Kamble was deep in debt, as his village Arjunsond, in Maharashtra's drought ridden Solapur district, had not seen sufficient rain in three years. Today, at least 10 farmers commit suicide on a daily basis in this region alone. Their families are left to pick up the pieces, as more often than not, the affected farmer is the sole bread earner. 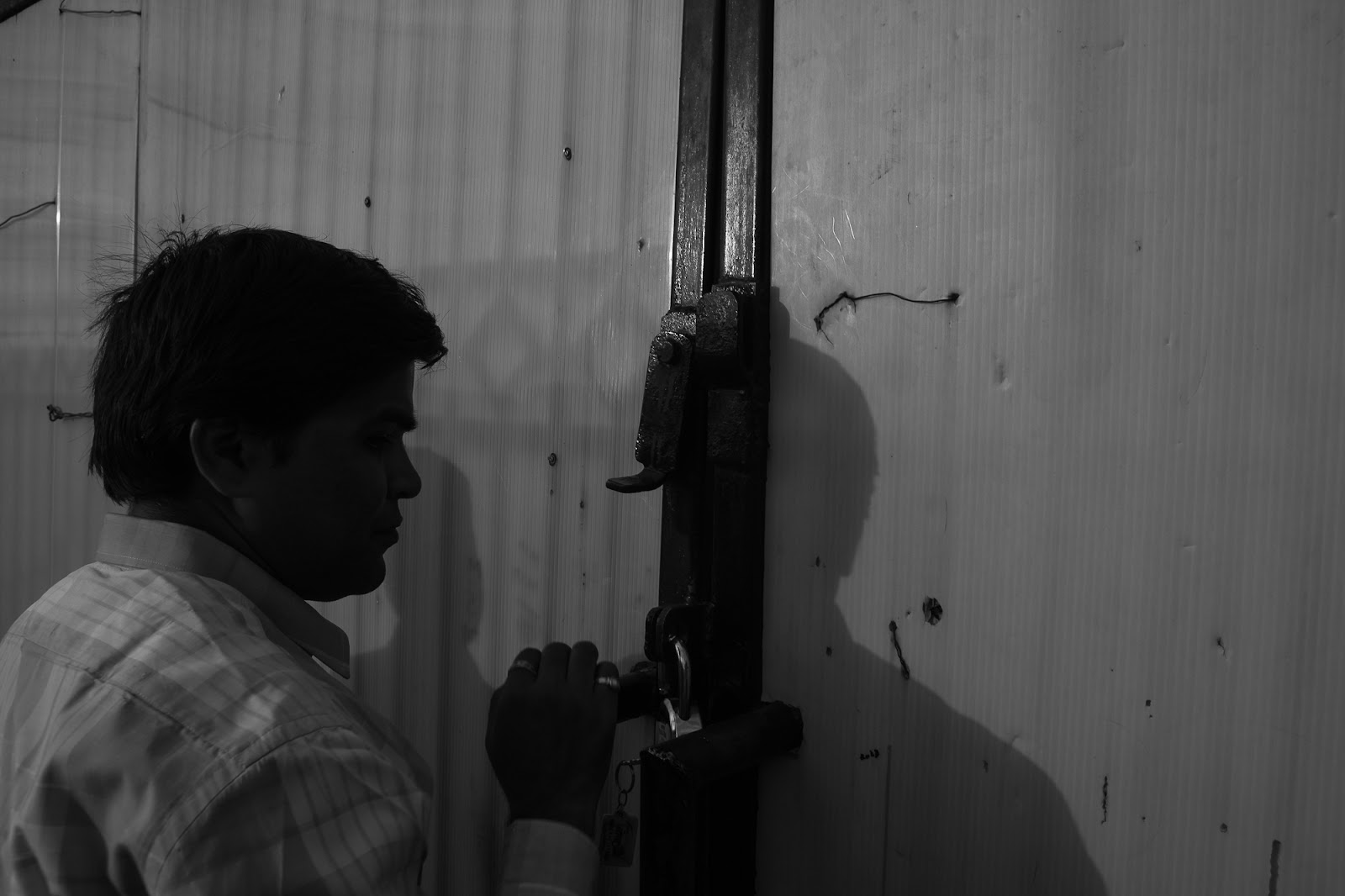 In Latur, Maharashtra, several factories have closed down due to lack of water. 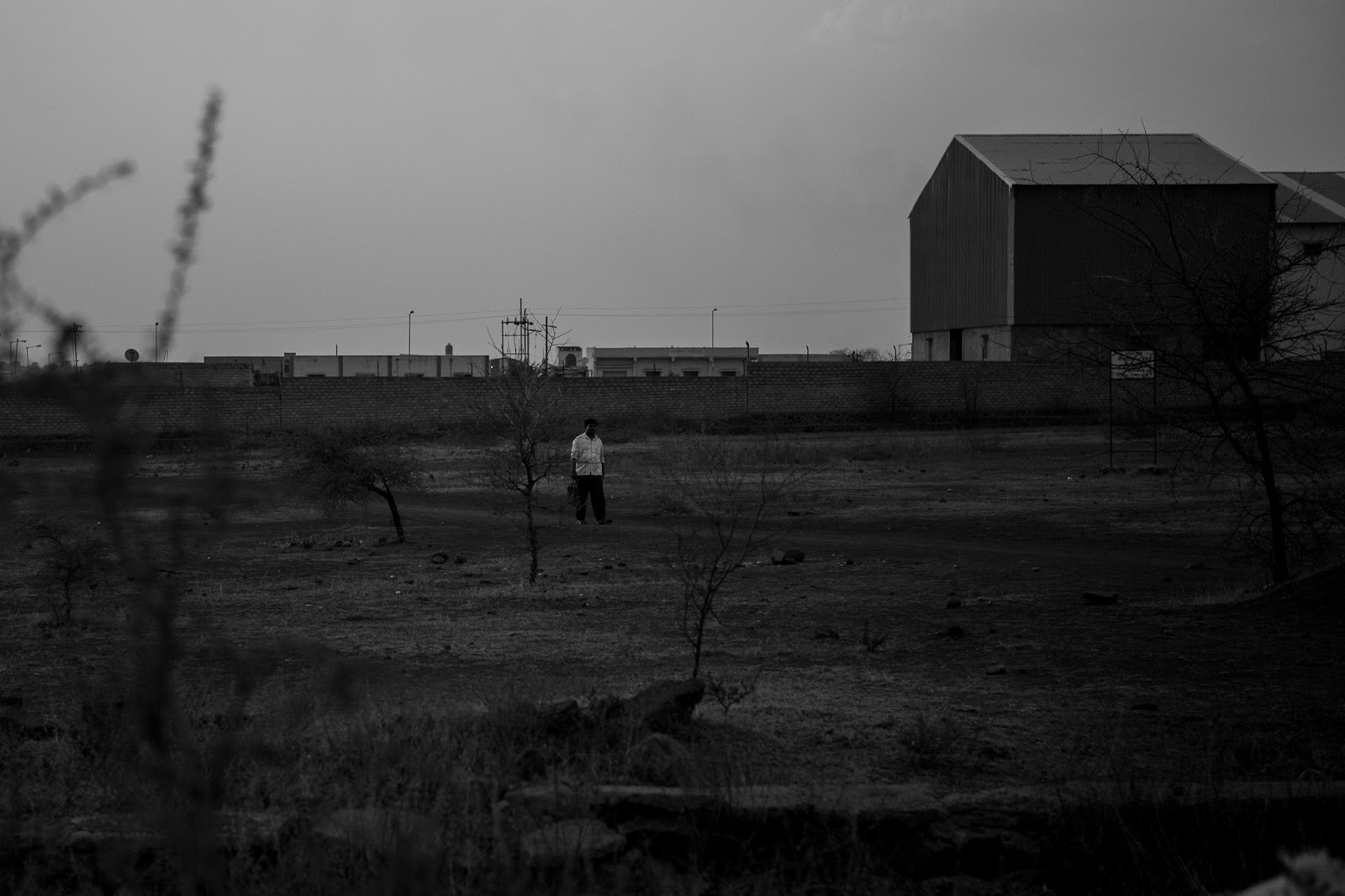 This particular factory used to employ 1700 people. In addition to the direct impact in terms of loss of jobs, the factory used to sustain other small businesses -- including a canteen and transport business, which too, have been adversely affected. 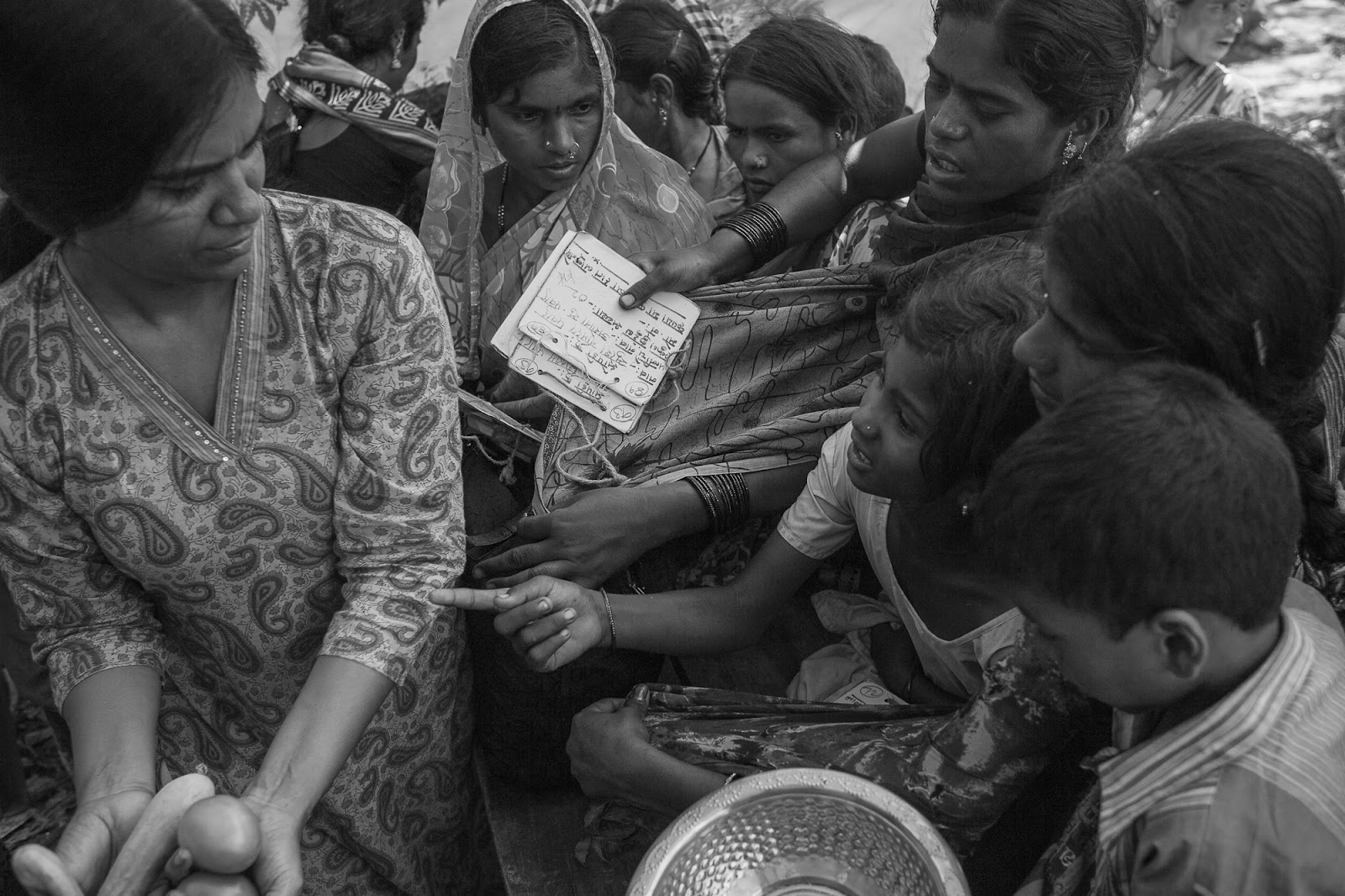 The severity of the crisis has prompted significant migration, as people leave the affected areas in search of respite in the big cities of the state, where they live in quasi-legal refugee camps. At the entrance of one such camp in Mumbai, a local BJP leader, Kabhitta Deshmu, stops us and questions -- “what have you come here to do?” On receiving an answer, the lady’s face immediately changes, and she cautions us to “not believe anything the people in the camp tell us.” 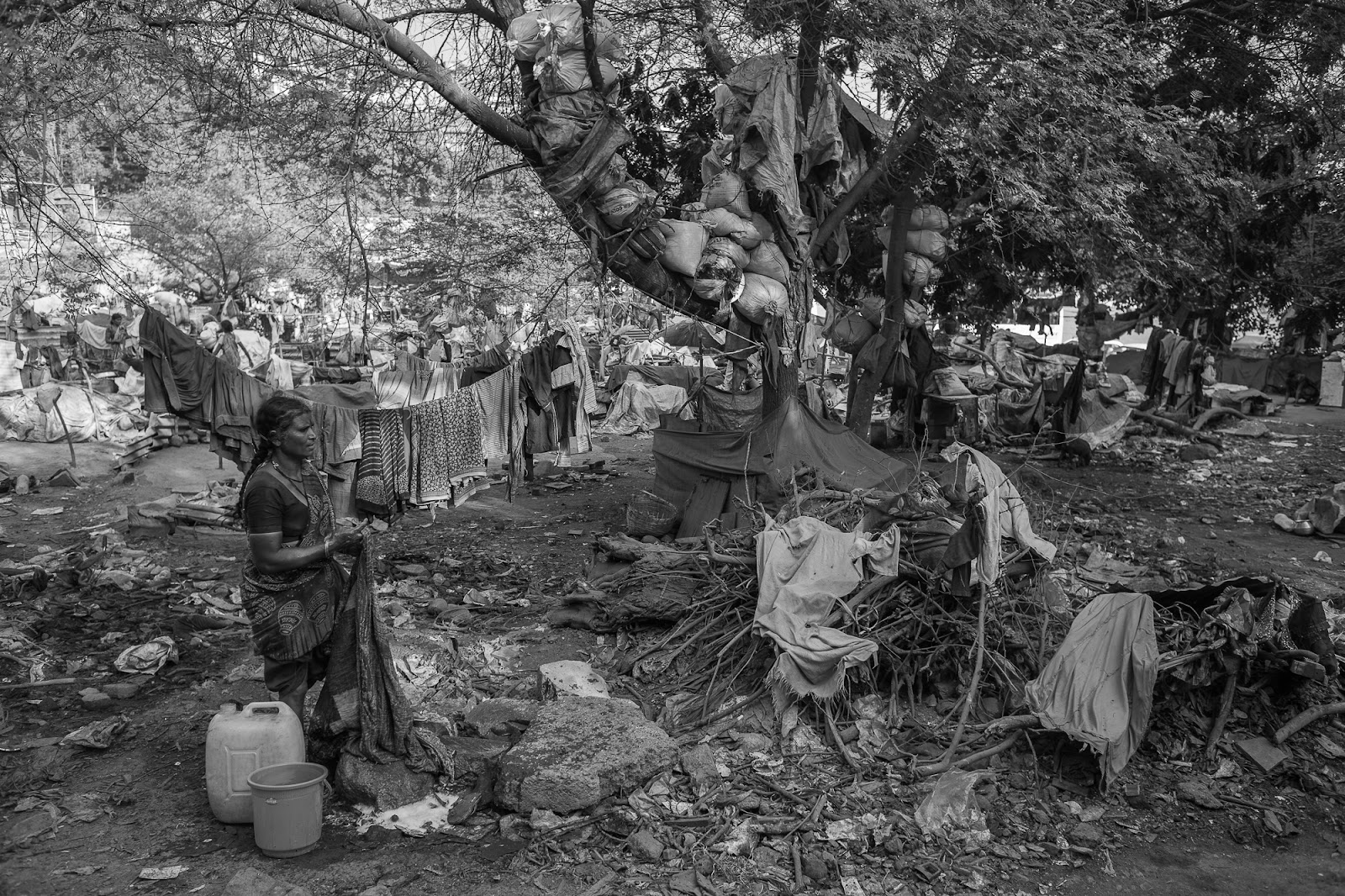 In recent years, the number of refugees streaming into these makeshift camps has seen a sharp rise. Locals from the Gathkopar area in Maharashtra recall that families from the Marathwada region have been migrating to the big city for the past 8 to 10 years.

(Zacharie Rabehi is a French photographer. See his work at www.zacharie.rabehi.com).