The Assembly Elections Decoded: Behind the Propaganda, the Cold, Hard Facts

NEW DELHI: The bombast is over, at least one hopes it is. And now that the television media channels are almost over with their customary ‘rah rah BJP’, the cold, sober, hard facts that have emerged from the five Assembly elections should prevail.

These facts tell a story that is different from the hype---generated by the BJP and the celebrity anchors who find bliss in ignorance--- that projected the results as a major victory for the BJP, a goodbye for the Congress party, a decimation of the Left despite Kerala, and of course the emergence of a third front that will be closer to the BJP than any other formation in the 2019 general elections. Or so the narrative went.

The Citizen unravels the facts as per hard statistics and figures, getting away from the propaganda blitz that was unleashed around the Assam victory for the BJP. At the end of this report are charts and figures taken from the Election Commission of India to support this analysis, and give the story as it is, and not as the politicians or the media wants it to be, to the discerning at one glance.

How well has the BJP done in these elections for BJP president Amit Shah to predict a ‘Congress mukt bharat”? Is the question we seek to answer.

The five states that went to the polls were Tamil Nadu and Kerala in the South, Assam in the North East, West Bengal in the East and of course the Union Territory of Puducherry. An aggregate of over 800 seats--812 to be exact---were contested. The BJP won just 65 of these, the Congress secured 114. The rest went to the Left parties and regional players, many of them who will not be in alliance with the BJP in the next general elections.

The real story of elections lies not just in the number of seats won or lost but in vote percentages that show how large is the support base for a party. In the last Lok Sabha elections the BJP came to power with just 31% of the votes leaving a whopping 69% outside its fold.

In these Assembly elections, the vote percentage of the BJP has dropped in the states despite the hype. It fell from 36.5% in the Lok Sabha elections to 30.1%; in West Bengal it dropped from 16.8 percent to 10.3 percent; in Tamil Nadu from 5.56 percent to 2.7 percent. In Kerala, where the RSS has held the largest number of shakhas according to some reports, the BJP got one seat but registered a slight hike in its vote share from 10.33 percent in 2014 to 10.7 in the Assembly polls now.

The BJP star campaigner for the elections as in the Lok Sabha polls, remained Prime Minister Narendra Modi. He addressed a host of meetings in all the states, remaining the face of the party. It was only in Assam that he shared the platform with the Congress dissidents who are now heading the state BJP, in that he limited his campaign to fewer meetings than before. As a Congress wag was heard laughing: “maybe that is why they won Assam.”

And interestingly, the Congress party that was buried by several anchors and BJP spokespersons in the first flush of the Assam victory has actually increased its vote percentage in all states, except of course Kerala. In Assam it went up from 29.6% to 31%, In Tamil Nadu from 4.3% to 6.5% and in West Bengal from 9.58% to 11.9%. It remains the principal opposition in Assam and Kerala, it is forming the government in Puducherry, and it has improved its tally in Tamil Nadu and West Bengal.

A quick look at the states and the performance of the BJP as compared to the Congress:

Assam: The BJP got 60 ; Congress 26 seats; AIUDF 13 seats, AGP in alliance with the BJP 14 seats, Bodo Peoples Front also an ally of the BJP, 13 seats. But as per the vote percentage the Congress continues to lead in the state with 31% as against the BJPs 29.5%. 40% of the remaining vote share has gone to the AIUDF, Independents, AGP and Bodo Peoples Front in that order. The regional groupings here are not wedded to the Congress or the BJP, and the latter will have to keep its partners AGP and the Bodos happy ---not an easy task given the conflicting positions on key issues---to ensure that the alliance moves into the Lok Sabha elections with confidence.

The Congress lost Assam after 15 years of incumbency, with a leadership that was old and tired. A new leadership and a new strategy now might go a long way to build on the vote share that still is more than the BJP in this dismal scenario where the Congress party was unable to beat the anti-incumbency mood.

West Bengal: In terms of seats and vote percentage the Trinamool Congress has swept. And at her first press conference Chief Minister Mamata Banerjee declared that her party would never go with the BJP, there was no question of that. So the media hype that the BJP is happy with her victory does not bear itself out, as Banerjee has not lost the Muslim vote that has remained loyal through these elections and while she will extend issue based support to the BJP in Parliament on occasion, her “hands off” policy for the BJP will continue.

The next two political parties, albeit a poor second and third, are the Left and the Congress in terms of vote share. The BJP has got three seats as against the Congress 44. It can be a little happy that its vote share did not drop to below 10%, but this pales in comparison with the 19-7% and the 12.7% of the Left and Congress respectively. More so as the BJP is unlikely to find viable coalition partners in West Bengal for any elections in the foreseeable future.

Tamil Nadu: The BJP has drawn a blank. And Remains at just about 2.8 per cent of the vote as against the 8 seats won by the Congress with 6.4% of the votes. This election actually wiped out all other political parties---like the one man shows that Tamil Nadu is famous for---with the AIADMK (40.8) and DMK (31.6) together capturing over 72% of the vote. The eight seats for the Congress party, thus, carry more weight than in other circumstances.

Puducherry: The Congress got 15 seats, the BJP zero. The Congress, set to form the government, received 30.6 per cent of the votes as against the BJP’s 2.4%.

Kerala: The Left Democratic Front is back in power. The BJP secured just one seat after sustained, hard work in the state with a maximum number of RSS shakhas being held in this state. Despite this it was unable to convert the work into seats----except one---although it did secure a 10.5% vote share that is more than the CPI’s ---8.1%--alone. The CPI(M) has a vote percentage of 26.5% and the Congress in its defeat 23.7%. 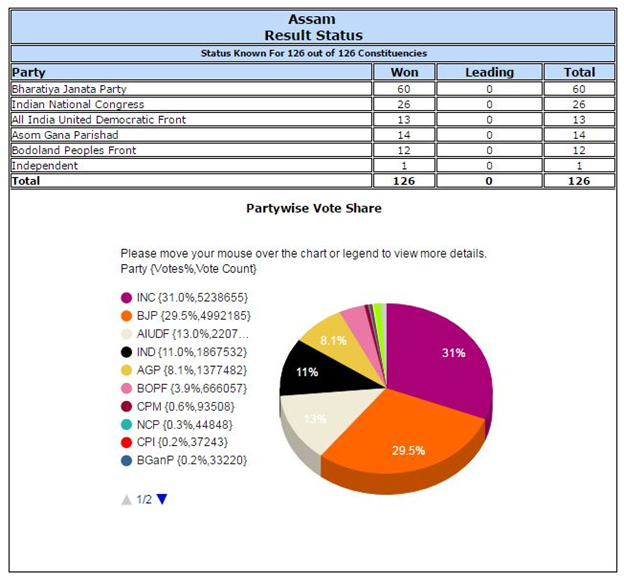 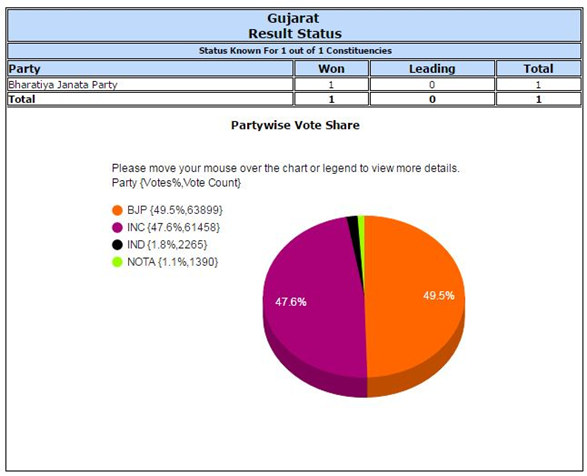 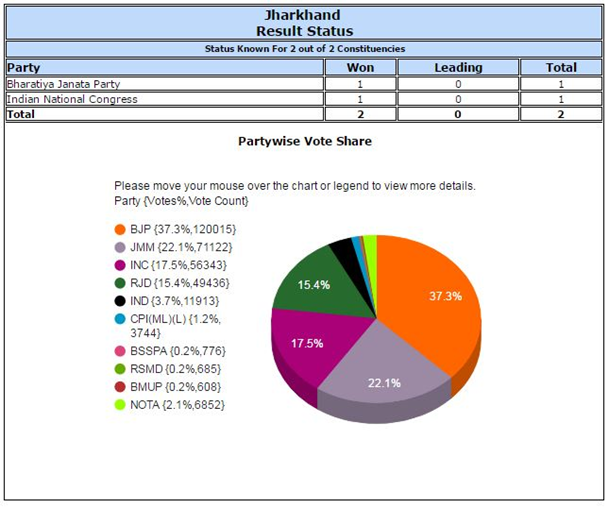 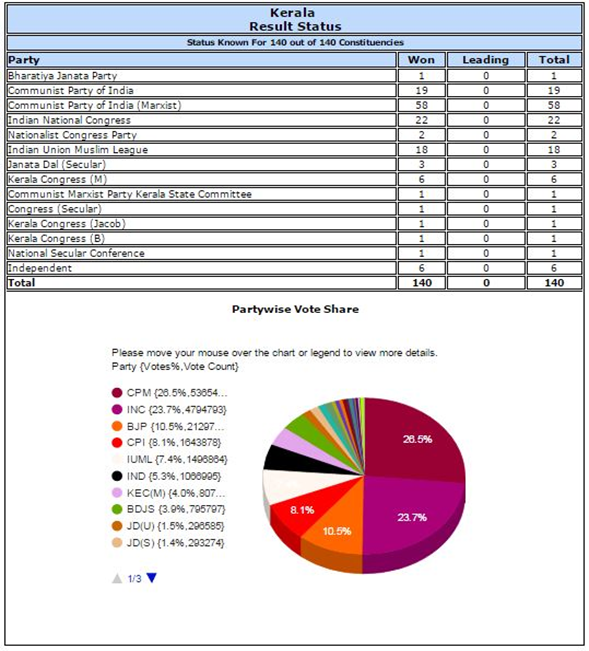 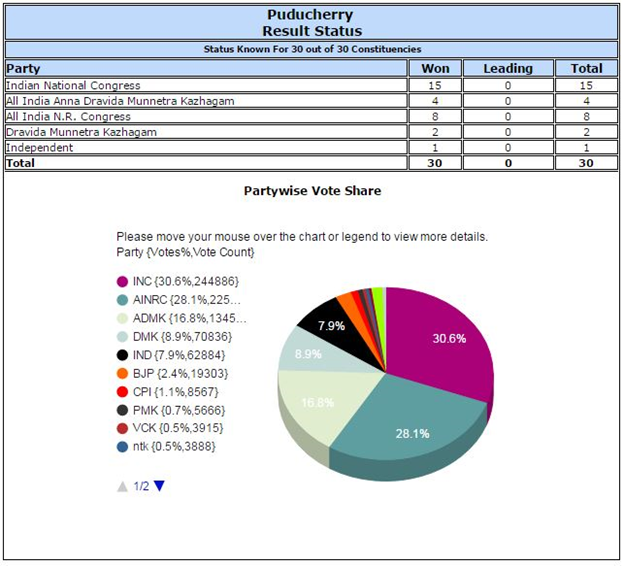 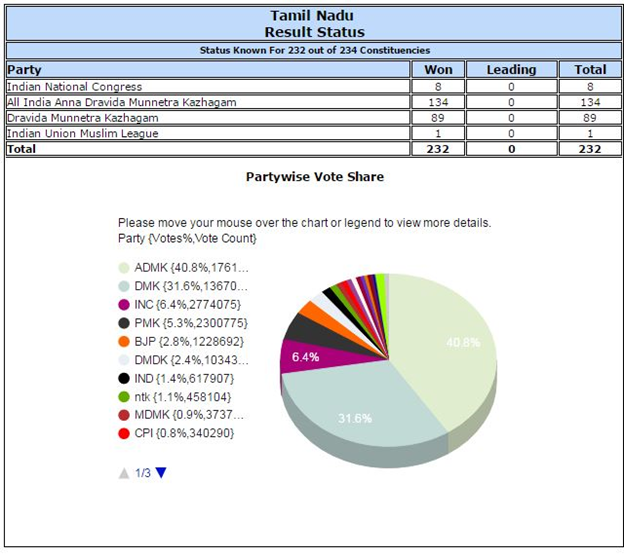 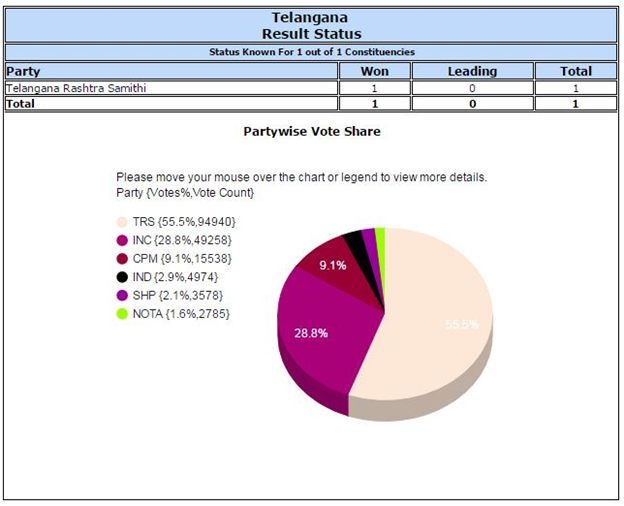 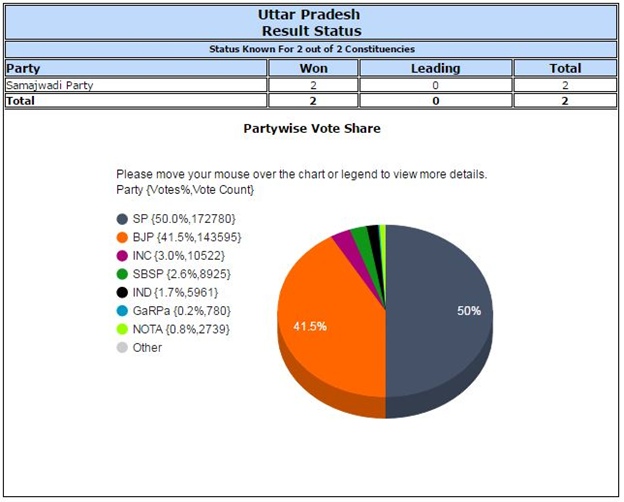 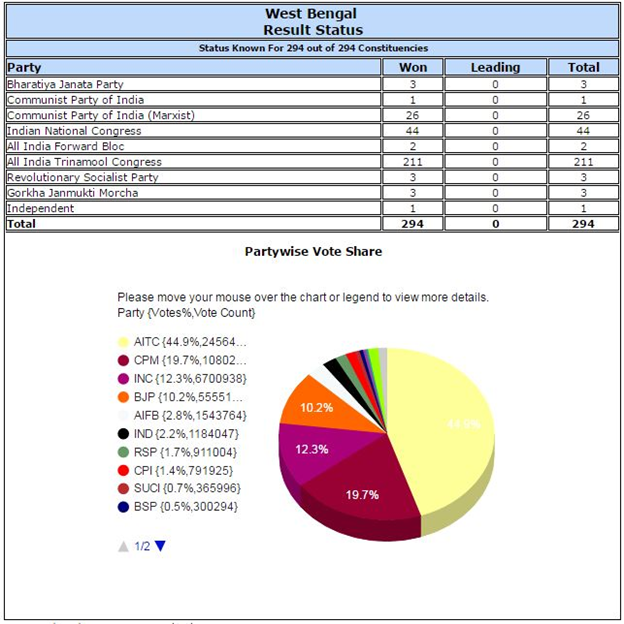