JAIPUR: Chronic starvation and food insecurity are not new challenges among the tribal communities in India. The marginalized pockets among the tribes have been facing severe food shortage and hunger for years now. The tribal belt of Udaipur is no less affected. Deaths due to starvation among tribes in the Southeastern part of Rajasthan has been well documented by several developmental workers over the years. While we still dwell on one comprehensive road map to tackling food insecurity, countless families face massive exclusion in terms of food and nutrition.

“Manish Kalasua is one of many children suffering from chronic starvation in the tribal belts of rural Rajasthan. Belonging to a family which has no access to food, Manish battles hunger and exclusion in everyday life” 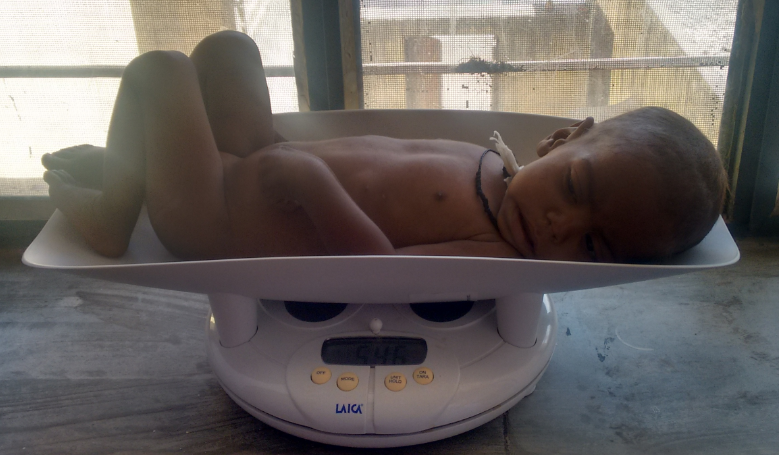 (Photographed during the initial screening at the Malnutrition Treatment Centre in a Community Health Centre facility situated at Rishabdev, Udaipur district)

“While speaking to Manish’s mother I came to know that the he hadn’t eaten for the last 11 months and was completely dependent on only mother’s milk even post the 6 month mark. He weighed 5.5kgs when I met him for the first time at the screening centre with signs of severe acute malnutrition and dehydration. His mother, Asha Devi who herself appeared weak and pale, says she has been unable to provide any kind of food to her children. Her husband is a migrant labourer somewhere in Gujarat and is unable to send across money for survival. Manish is the third child in the family and his elder brother and sister also come under the severe acute malnutrition bracket. She quietly wipes her tears in hopelessness and despair”.

The food insecurity atlas among the rural population has been increasing at steady rates over the years. Though there has been some improvement in the overall nutrition rates among the rural population but the ultra-poor and marginalized communities still face threats of chronic hunger. The food security act passed in 2013 was a concrete step to manage the nutrition needs and achieve state wise food security. Implementation of this act also meant the overall improvement of the Public distribution services.

Unfortunately the PDS has not been a completely error free functional systems and faces heavy leakages. The policy of food security does not narrate on exclusions, so much that people only with PDS cards or BPL cards have access to subsidized ration. It completely excludes the other category of people who don’t even have access to local distribution spots and barely obtain food from the government services. Though there has been efforts to include the poorest of the poor under the AAY (Antyodaya Anna Yojna) scheme; overall targets to eliminate starvation remains unidentified. The identification of multidimensional poverty and categorization of the most deprived remains the major challenges to hunger and food security among the tribal belts. 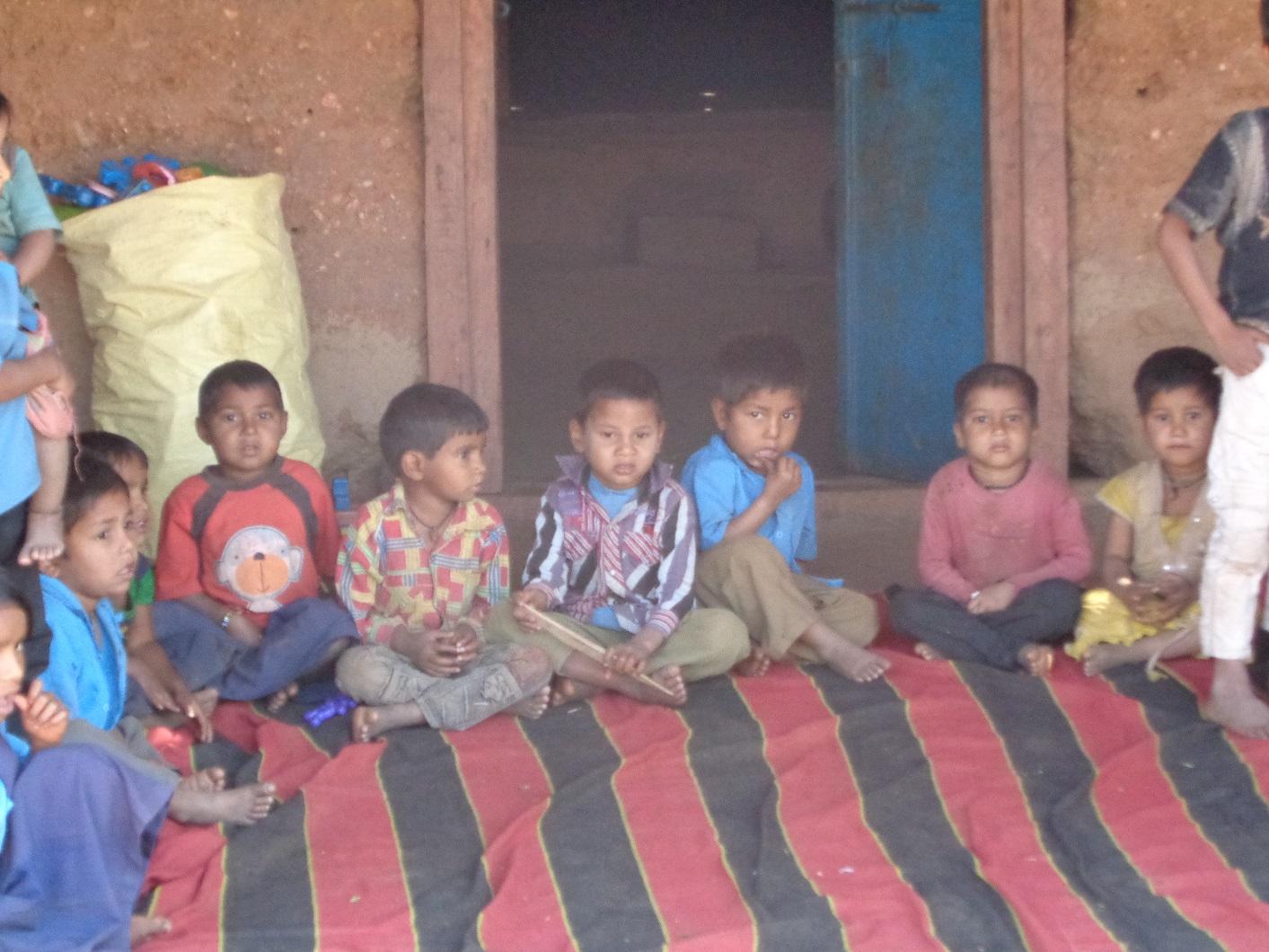 (Hungry kids waiting for their meal at the local Balwadi of a small tribal village called Kojawara in the Kherwada belt of Udaipur District).

“Kamla Devi a local Balwadi attendant at the Kojawara Balwadi (a day care centre operated by a local NGO) tells me her experiences with these kids. She has to manage the nutritional needs of at least 10 kids in a day while keeping a monthly track of their growth records. She says the work is tough and especially when some of the children fall ill. A Balwadi ensures proper meals and overall cognitive development of children in the village. While she is happy with her efforts she also says most of the children who are a part of the Balwadi scheme are ensured food only during the centres operational time. Since this is a day care centre, the children have to return back home in the evenings. She adds that most of these children come from families where there is barely any meal. The kids coming to the centre are generally on a starvation period from a time they go back home till they arrive back the next morning. It was only a couple of months back that there was a child who died in the nearby village due to chronic starvation. She fears that one day her centre might also have such horrifying cases.”

The Government of Rajasthan in the past has had several schemes targeting malnutrition and poverty. The effective implementation of a facility based management for severe acute malnutrition (SAM) known as a malnutrition treatment centre (MTC) in several districts has been a prominent scheme aimed to provide quality care and nutritional support for SAM children belonging to marginalised communities. This has been a key effort of the National Health Mission charter in several states with good results in Rajasthan. If we observe the national guidelines of a MTC facility, a child suffering with SAM is treated for a total of 12 days with in-patient facilities. Over the 12 days the child is scheduled for various therapeutic feeding patterns for positive growth outcomes at the end of the rehabilitation programme. The major problem here is the scheme only addresses one issue of food security. In most cases post discharge, the child is back on his/her hunger cycle at home; the problem of SAM again arises with major complications. It’s more of a vicious cycle of hunger that the child keeps falling into.

(Basanti Devi a Local ASHA worker at the CHC explains her story of managing severely malnourished children in her village).

“Basanti Devi a local ASHA worker in the Kherwada block says it’s been a very difficult journey for her to work in the fields managing referrals for the nearby PHC’s and CHC’s. She says that convincing families to take their children for hospital care is the toughest challenge at work. When I enquired about her family's hunger status; she says there was a time during the crop failures that she was nearly without any food for a while but awareness about local schemes helped her achieve work as an AHSA with a compulsory AADHAR identification. This made her a part of the system as well as helped her children manage nutrition with the Government’s take home ration schemes. According to her, most of the people from the marginalised communities have a fear of being represented. Almost all government organised schemes relating to food and health need the beneficiary to be registered in a system and identification is a fear among several families she has met. She has been instrumental in organising take home ration for pregnant and lactating ladies in the local Anganwadi and has observed that most beneficiaries are unaware of their entitlements of ration and other goods related to food. She suggests that I run a campaign along with the panchayat on entitlements of food and employment related schemes.

We have had more than a decade of economic reforms, but still the rural pockets face major inequalities and exclusions in terms of various developmental policies. The tribal belts in India have alarming rates of starvation and hunger along with other major agrarian crises. With more than nine states having declared drought recently, food security in these pockets are getting severely hampered. Majority of families in these pockets are sleeping hungry, with negligible expectations of an improved situation. Poverty stagnation and marginalisation due to food are concerns of a massively excluded population.