NEW DELHI: “I want reservation, not 56 inch chest,” were the first words from Pattidar leader Hardik Patel shortly after he was released on bail, after nine months in prison. Defiant and clearly not beaten by his long stint in jail on charges of sedition and violence, Patel said that he has not changed, in either attitude or resolve as he will continue fighting for reservations for his community.

He said, however, that he was open to talks with the government, “I will keep working for the community. I am ready to talk to the government.”

Patel will be leading a caravan through Surat, with Patel dominated areas on the route. Hundreds of supporters reached Surat to welcome him out of jail. 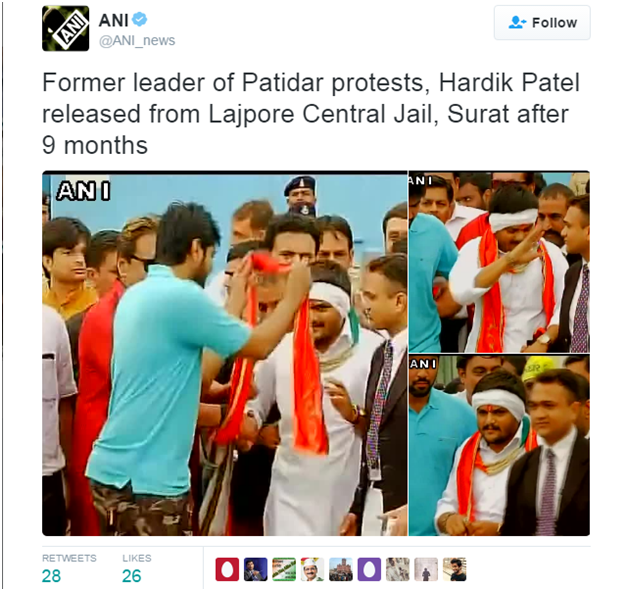 Hardik Patel is expected have selected Shrinathnagar in Udaipur, Rajasthan for the six month exile ordered by the courts as part of his bail conditions that he must not remain in Gujarat. He will stay at the residence of former Congress MLA Pushkarlal Patel.

In spelling out an initial agenda, Hardik Patel made it clear that one, the struggle for reservation for the Patels will continue; and two, that he will add farmers and women to the larger constituency he will be seeking to address. Interestingly, as if to give credence to Patel’s concerns for the farmer a chained farmer, a man dressed in Shivaji attire, and young people with white caps were prominent amongst those who had gathered to receive him outside the Lajpore Central jail in Surat. 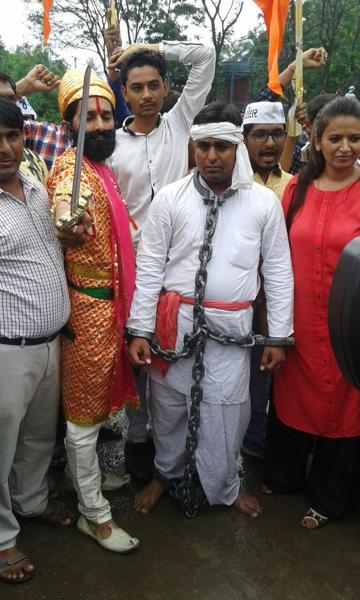 Hardik Patel is expected to campaign in Uttar Pradesh, as he did selectively in Bihar for the Assembly elections. The Kurmi community with affiliations to the Patels will be his target group for UP although it has still be determined what, if any political party, he will support for the forthcoming state polls.

Senior opposition leaders, from the Congress party and Aam Aadmi party have all been in touch with Hardik Patel and his political supporters in Gujarat. Both the Congress and AAP have been wooing him, with BJP Chief Minister Anandiben Patel almost losing her job in the wake of his agitation and successful mobilisation of the Patel community to which she also belongs. In fact, according to sources the Gujarat CM saved her job after a hurried visit to New Delhi to meet Prime Minister Narendra Modi. It was after this that reports suggesting her imminent ouster died down, and it was made known that she had got a fresh lease of life.

That the state government is wary and nervous after Patils release was evident in the enormous security bandobust in Surat after his release. Bus services were cancelled as the police was compelled to give permission for the road show, to prevent an adverse fall out.

Hardik Patel’s Facebook page carried photographs of the celebrations after his release: 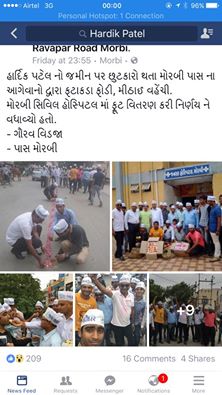